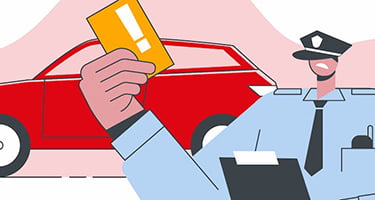 When you first learn to drive, you’re pretty clued-up on the rules of the road, you pass your test, get your keys and the open road is yours. And obeying the driving laws is, for the most part, down to common sense, right?

As expected, safety is a number one priority for most drivers, so we all ensure we stick to speed limits, don’t talk on our phones and try our hardest not to endanger other drivers and passengers.

The rules of the road and driving legally are fairly consistent across different countries and from state to state in Australia. However, there are a few obscure rules that could catch you out if you were unfortunate enough to break them.

Budget Direct has delved into the fine print of each state’s road rules to find ten of the most obscure road rules you probably didn’t know existed in Australia, and highlighted if they’re illegal and carry a fine. 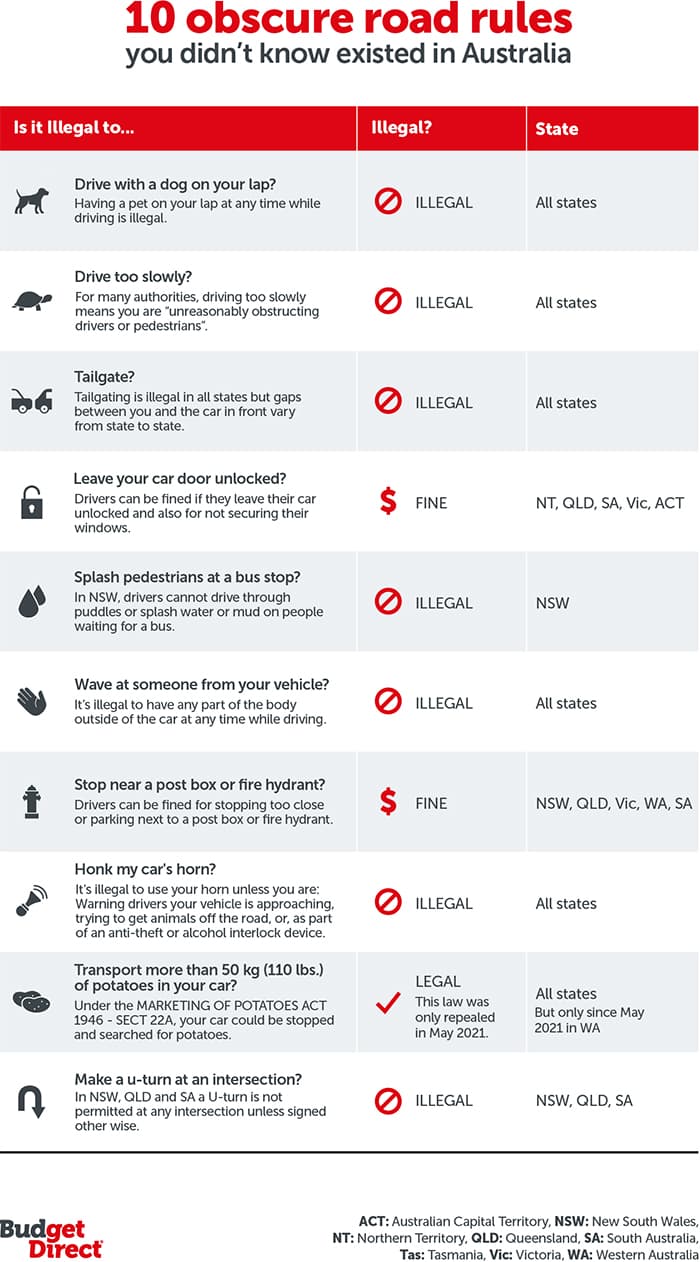 1. Is it illegal to drive with a dog on your lap?

In short, yes: It is illegal across all states in Australia to drive with a dog or pet on your lap. If you have a larger dog, it is unlikely you would be doing this anyway (unless they’re unrestrained in your vehicle) but with the rising popularity of miniature or toy breeds, more and more Australians are being stopped and given points on their licence for doing this [1].

Not only is this dangerous to yourself and other drivers as the unrestrained dog could obstruct your view or interfere with your driving, but should you lose control, your pet could be seriously harmed from an impact. So even if your pooch is the size of a tea cup, just don’t risk it!

2. Is it illegal to drive too slowly?

This is a tough one, as it’s not always immediately clear as to what “too slow” actually means. However, if you break it down to what the effects of slow driving could be, where driving too slowly means you are “unreasonably obstructing drivers or pedestrians”, it’s easy to see why this can be dangerous and is therefore illegal across all states and territories in Australia [2].

So not only do you need to watch your speed at the upper limit, you also need to ensure you are not driving below the speed limit to which you are causing an obstruction.

3. Is it illegal to tailgate?

We have all been there. You’re sticking to the speed limit and someone is right on your bumper… As much as you might want to fly off the handle, you remain cool headed and carry on with your journey at the legal speed. Guess what? It is actually illegal in all states and territories to tailgate [3].

4. Is it illegal to leave your car door unlocked?

In this day and age, car owners rarely leave their vehicle unlocked. However, let’s say you had just filled up with gas and went in to pay and absentmindedly left your door unlocked? Well, in New South Wales, Queensland, Victoria, South Australia and the Australian Capital Territory, you could be fined for not properly securing your vehicle.

As to if you will be fined, well the detail is in the distance because in New South Wales, drivers can be fined if they leave their car unlocked, but only if they have moved more than three metres away from their vehicle.

In South Australia, Northern Territory, and the Australian Capital Territory, this rule mostly applies to your car windows and in these territories, if your window is lowered for more than a 2cm gap, you could face a fine. In Queensland and Victoria, if your window is left open by more than 5cm, you could be liable for a penalty charge. Who knew that a gap as small as 2cm could amass a fine as big as $117 [4].

While it may not be illegal in all states, your insurer may not cover you if you leave the vehicle unattended, unlocked and the keys in the ignition.  Check with your insurer, or better still, err on the side of caution and always secure your vehicle.

5. Is it illegal to splash pedestrians at a bus stop?

Not only is this mean, but it is actually illegal in just one state of Australia; New South Wales [5]. If you were to drive through a puddle and splash water or mud on pedestrians waiting at a bus stop, you are breaking the law.

The rule does get a little - excuse the pun - “muddy”, as to what specifically is classed as “mud”, so your safest option is to steer well clear of any puddles near bus stops in NSW.

6. Is it illegal to wave at someone from your vehicle?

Waving goodbye to your friends from your moving vehicle could get you in hot water. Even winding down the window and stretching your arm outside to cool down could also get you in trouble. According to all state and territories’ driving regulations, it is illegal for any part of your body to be outside of a moving vehicle at any time [6].

So next time you’re bidding farewell to your mates, try waving inside the vehicle and put the air con on.

7. Is it illegal to stop near a post box or fire hydrant?

This is a tricky rule to navigate because convenience could cost you. In some states across Australia, you could face a fine for parking your vehicle too close to a post box or a fire hydrant [7]. How close differs across states. For example, In New South Wales, Queensland and Victoria you could face a parking penalty if you stop or park within three metres of an Australian post box unless dropping off or picking up passengers or mail.

In New South Wales, Southern Australia, Victoria and Western Australia, you are not permitted to park or stop within one metre of a fire hydrant or fire plug. So make sure you choose your locations wisely next time that you park on a road in these states and territories.

Driver just cut you off in your lane? Greeting a friend outside their house? These might be two examples of when you improperly use your car’s horn. In fact, it is actually illegal to use your horn across all of Australia unless you are: Warning other drivers that your vehicle is approaching, trying to get animals off the road, or, as part of an anti-theft or alcohol interlock device [8]. In all other circumstances you could be breaking the law!

This has to be one of the most archaic laws still in existence but, yes, up until May 2021 when it was repealed, if you were carrying more than 50kg of potatoes in your vehicle in Western Australia, you could have been breaking the law.

So what did this rule entail? Well, members of the Potato Marketing Authority were allowed to stop and search your vehicle if they suspected you might have more than 50kg of potatoes on you. Potato Inspectors have the right to demand the name and address of anyone in possession of what appears to be more than 50kgs of potatoes. According to sources, the fine was $2,000 for your first offence, or $5,000 for your second offence [9]. This law has existed since 1946, but as of May 2021, it has since been repealed!

10. Is it illegal to make a U-turn at an intersection

The laws on making a U-turn vary across Australia, and of all of the road rules included in this piece, this one is potentially something you could get caught out on the most.

In New South Wales, Queensland and South Australia a U-turn is not permitted at any intersection unless it is signed otherwise.

This is where the rules can get complex: Victoria is the only jurisdiction in Australia where motorists can make a U-turn at all intersections, including traffic lights, unless there are continuous lines or a ‘no U-turn’ sign.

For drivers in Western Australia, Tasmania and the Territories, making a U-turn is allowed at all intersections, but not at traffic lights (unless signed otherwise) or if a ‘no U-turn’ sign is located there [10].

So whilst some of these rules are funny, it’s clear that there are some variables between what is and isn’t illegal from state to state in Australia. And this article should by no means be taken as legal advice. When driving anywhere new or unfamiliar, it’s always best to check the road rules for the region for optimum road safety awareness and protect yourself by making sure your car insurance is up to date with the relevant cover.

Data has been collected manually from various sources citing whether the rules are illegal across all states, some states and if rules carry any state-level fines.

You can view the full data set here.