The current debate amongst drivers, car makers, insurance providers, and public safety officials is brewing over how best to configure your car’s side-vision mirrors. It’s a question of driver’s priorities pertaining to the usual course of motor vehicle operation.

For about as long as there have been side-vision mirrors, drivers have been instructed that the preferable configuration is to adjust them so that the driver can see either of the rear corners of the vehicle in the side view, whilst sitting at the controls in normal driving posture. The generation-old ‘rear corner viewing setup’ is optimum for backing into parking spaces.

But it has a fatal flaw. It leaves, as most of us well know, a blind spot. From our very first driving instructions, our attention is directed at the imperative need to scan the blind spots before merging, or changing lanes in traffic.

There seems to be a fatal irony at the root of considering blind spots in driving. Mirrors are considered safety features. But using them in traffic means having our attention occasionally redirected to somewhere other than the front of the vehicle.

When you consider that around 30 percent of car crashes are rear-end collisions, and less than 10 percent result from errant lane changes, the encouragement of blind-spot scanning seems like bad practice. But it’s one that has apparently been internalised across the entire car culture landscape. 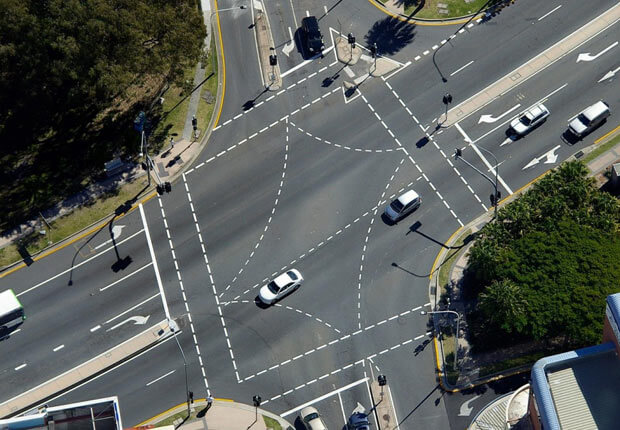 Various car makers, like Volvo, Toyota, Audi, and Mazda have been developing and implementing blind-spot detection systems into some of their newer models. These detection systems, categorised under the term ‘active blind spot monitoring,’ mainly operate on single-beam, monopulse radar systems, mounted on or near the side-vision mirrors or rear bumper.

They provide alerts when other vehicles enter blind spots to the rear or side of equipped vehicles. According to Delphi, a parts manufacturer that supplies their own active blind spot monitoring system (RSDS) to major automakers, the RSDS gives drivers more time to react to obstacles that may be difficult to see in the side mirror. Some of Delphi’s listed RSDS features include blind spot detection, lane change/merge assistance, a rear cross-traffic alert, and rear pre-crash sensing.

All of this seems well and good except that it’s a great deal of technological design and development to address one of the less frequent types of car crashes. And while we’re asking these questions, we might also want to ask how much does this new high-tech equipment add to the purchase price of cars? Is it all worth it?

And does active monitoring equipment surpass the good old fashioned, tried-and-true, passive monitoring side-vision mirrors, which every driving generation has used to date? Surprisingly not, according to research and surveys auto industry publications conducted back in 2012. Not only do active monitoring systems fail to improve the overall safety of equipped vehicles, some speculators fear widespread reliance on them may threaten to shrink the effectiveness of a vehicle’s most important safety feature; an attentive and conscientious driver.

The new approach to mirror alignment that seems to be gaining popularity comes from a research paper published by the Society of Automotive Engineers (SAE) back in 1995. The SAE recommended method aligns the rear-vision and side-vision mirrors in a way that eliminates the blind spots at the four o’clock and eight o’clock positions. Step-by-step, visually aided instructions for setting mirrors in this way can be found all over the internet.

Here’s a basic break down: 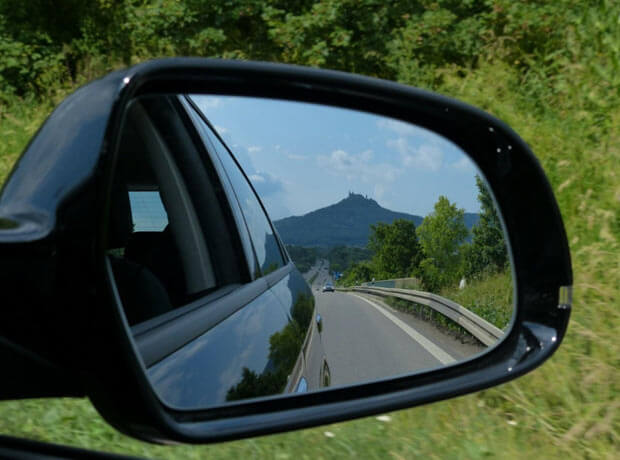 Some critics say this setup eliminates the driver’s view of the rear corners, which opens greater risks of damaging the vehicle, property, and possibly harming bystanders in reversing accidents. But remember that those corners are still visible when you tilt your head towards either side. Since reversing most typically occurs in slower, more controlled and predictable situations, they presumably incur lower damages.

Perhaps the fact that most reversing accidents happen in the driver’s own garage or parking space adds a bit of extra sting, since everything involved is most likely their own. Much of the risk of a reversing accident at home can be mitigated with the installation of a convex mirror mounted in the garage, or driveway. Convex mirrors are very inexpensive, and if mounted thoughtfully, give drivers a 160 degree view of the field behind them. For all these reasons it makes the most sense to let the robots eat cake, and adjust our collective heads to what amounts to safe, attentive, conscientious driving in traffic.

Are You Taking Risks? Driving Unsafe