When we set out to create this post, we knew we wanted to tell a story about language. After all, the language spoken in a country tells us a lot about its history, culture, and relationships with others. So, we began to gather data. Using the CIA World Factbook and Ethnologue, we looked at the most commonly spoken languages in each country of the world. But we didn’t stop there. We also dug up the second- and third-most popular languages in each country – and that’s where things got interesting.

As you might have expected, English turned out to be the most popular third language overall. But second to that was French and tied for third, Chinese and Italian. Interestingly, Chinese is actually the world’s most widely spoken language, but it is the third-most popular language in only four other countries. 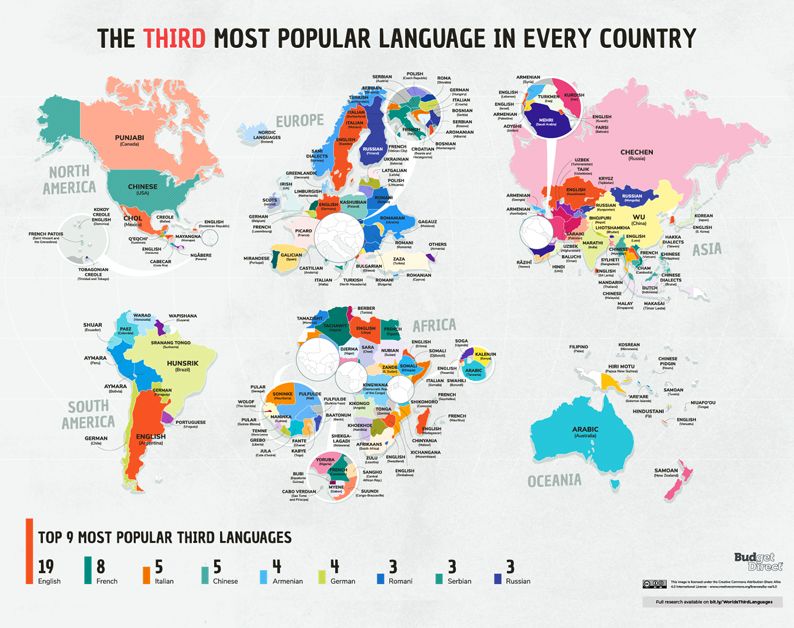 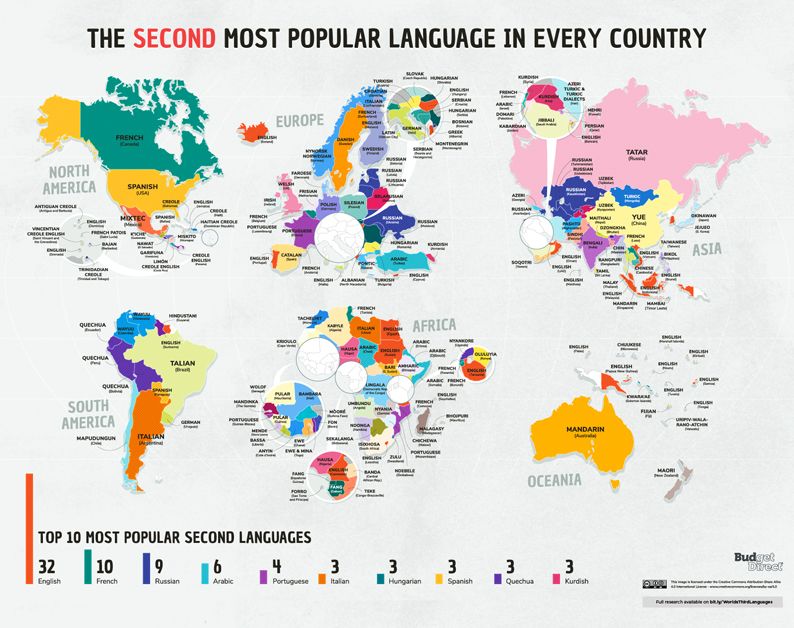 You may notice a pattern in the North American map below – and unfortunately, that pattern is “no data available.” For 10 of the 23 countries, we weren’t able to find data for the third-most popular language. But we were able to discover that in Canada, the largest of the North American countries, Punjabi was the third-most popular language. In the United States, it was Chinese, and in Mexico, it was Chol, a language in the Mayan family.

And as you might have expected, the most common language in most countries in North America is English, but only by a tiny margin. In ten countries, English is the most popular language, but in nine, it’s Spanish. 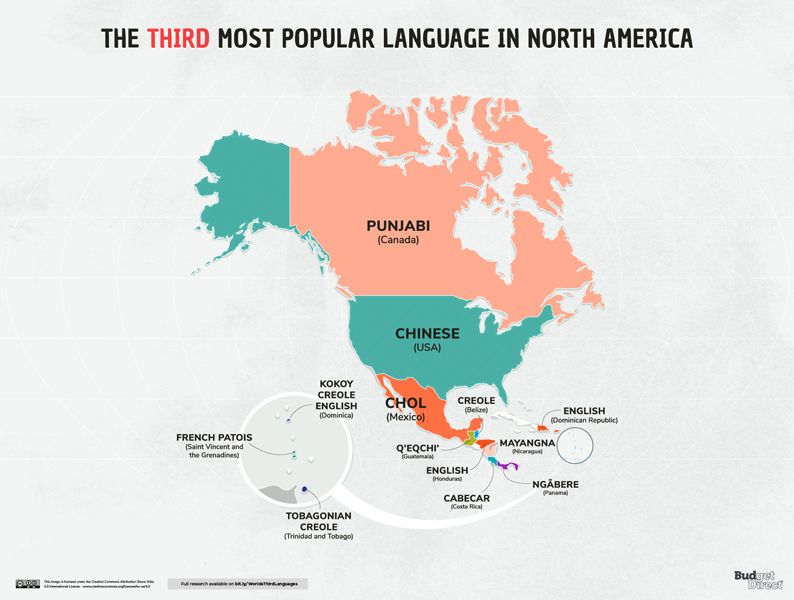 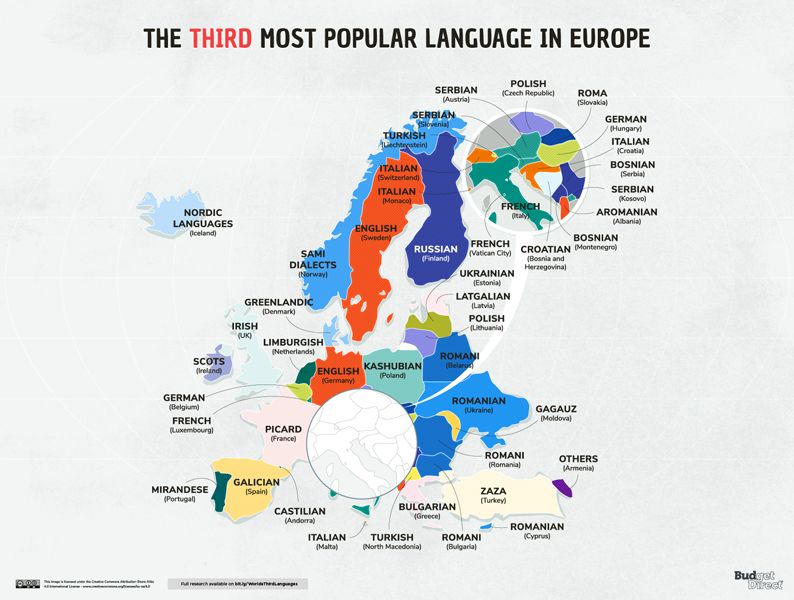 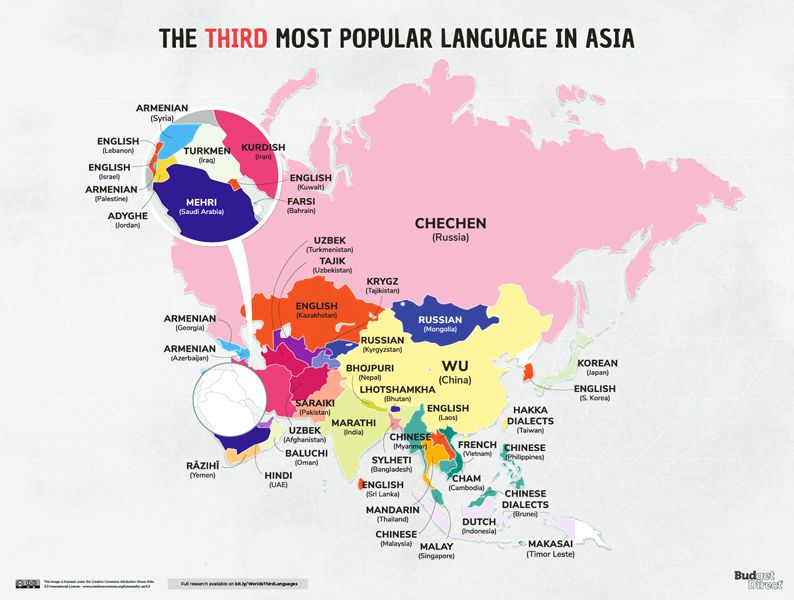 Only two pairs of countries share a common third-most popular language: Bolivia and Peru with Aymara (spoken by the Aymaran people in the Andes) and Paraguay and Chile with German. Interestingly, this came over with a flood of German immigrants in the late 1800s and early 1900s. 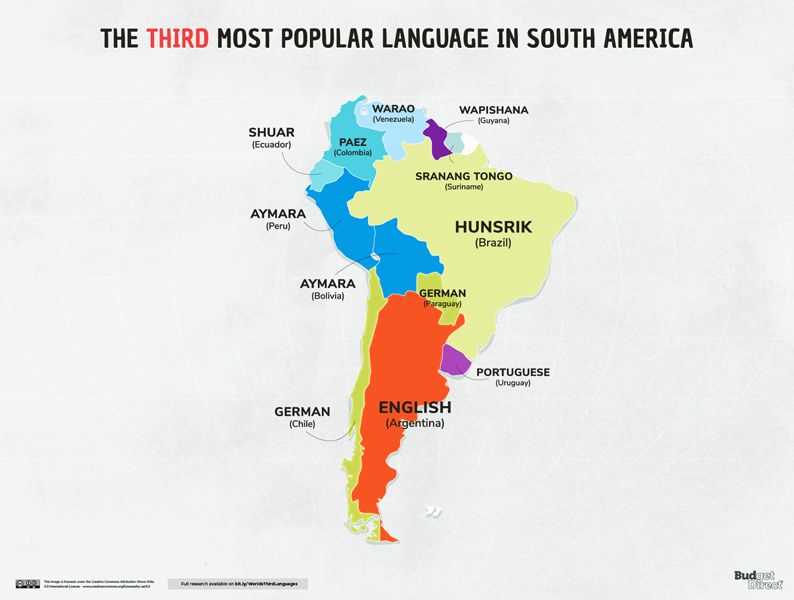 You might notice a whole lot going on in this map. That’s because, with 54 countries, Africa has the most countries of any continent. We also found an incredible 42 languages as the third-most popular in these countries. This means many of these African countries have different popular languages than their neighbours. This discrepancy makes sense when we consider the vastly different histories and cultures both within African countries and across borders.

With all of the different languages spoken in these countries, though, English still remains the third-most popular language in the most places with a total of six countries. 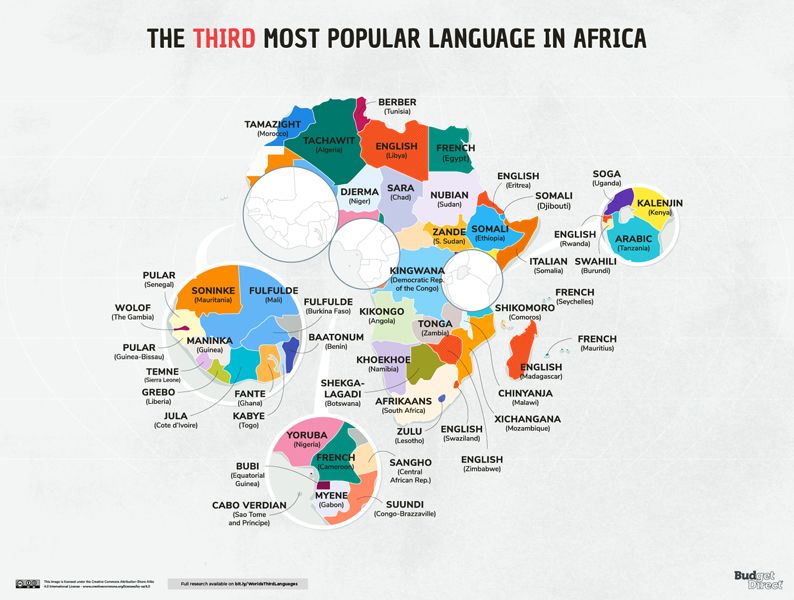 Oceania is a continent of islands that, in some cases and places, have been much less influenced by the modern world. So it’s no surprise that some of the third languages you’ll see on this map aren’t as well known. Niuafo’ou, for example, is the third-most popular language on Tonga’s northernmost island, and the little-known Hiri Motu is the third-most popular language in Papua New Guinea.

Only two countries in Oceania share a common third language: Samoan, spoken in Tuvalu and New Zealand. On the larger end of things, there’s Australia. Its third-most popular language is Arabic, just preceded by Mandarin, and of course, English. 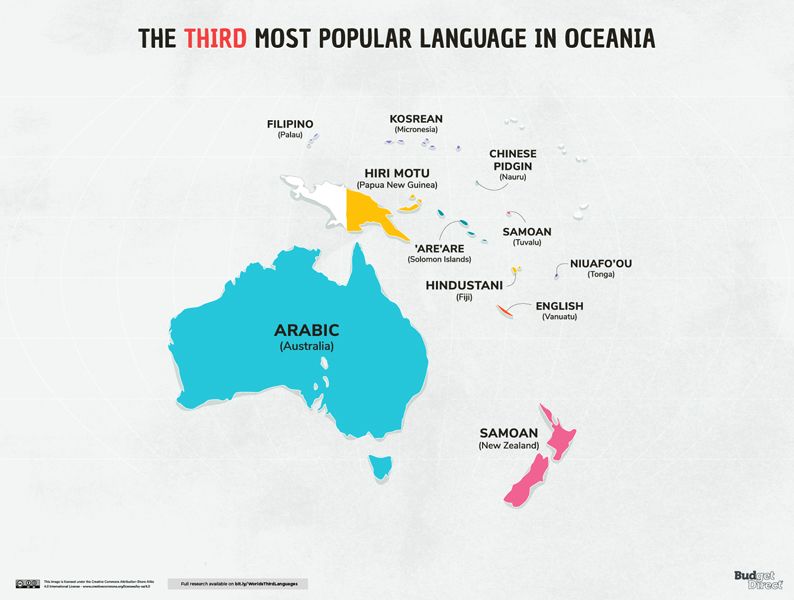 In order to create these maps, we started out by gathering data from the CIA World Factbook. We listed the most commonly used languages in all the countries we could and then filled in any gaps and double-checked our information with the world language website, Ethnologue.

Here, we focused on L1 languages, i.e., people’s primary languages. We wanted to make sure we were only including languages that were actually used on a daily basis, so where any data from Ethnologue didn’t match up with the CIA’s data (as it includes L2 languages as well), we swapped it for the Ethnologue data.

In some rare cases, we were unable to find information for the third-most popular languages, which we’ve indicated on the maps. Mostly, though, we were able to tell quite the visual story of the way language is used and distributed all over the world.

Visit bit.ly/WorldsThirdLanguages if you’d like to go through the research that went into creating this project.

One photo, four seasons: a year in 8 places around the world

What to pack for a cruise for first time cruisers