“I’m starting a photo project called #vanlife,” wrote Foster Huntington as he drove out on the trip of a lifetime – or at least of a lifestyle – in November 2011. “It’s a celebration of ships of the open road and the notion that, ‘home is where you park it’.”

Eight years later, his influence has been well-and-truly felt. Not everyone who jumps in a van and leaves their hometown in the dust does so because of a photo they’ve seen on an app. But sooner or later, most young van-dwellers find themselves reaching for their phone and navigating to the forward-facing camera.

We scraped the metadata from 25,000 #vanlife Instagram posts to identify the most common destinations for motor-home nomads. And then we created a series of maps to show at a glance exactly where the #vanlife is at.

Here are the most common international locations for the #vanlife hashtag, according to the data we sampled.

North America is overwhelmingly the world’s most popular place to tag your Instagram images with #vanlife. Perhaps it is the culture – or perhaps it is that vast network of open roads and endless plains and coastline.

But it’s not all sunsets, deserts, and scruffy dogs on piers. Vancouver is the number one spot in the world for the #vanlife hashtag by some distance, and it may have something to do with the microculture of urbanites who choose to live in vans even while they work their day job. There is even a small community of public transport bus drivers living the #vanlife together. Now that’s a life on the road!

An even less likely hit destination is Venice, the Italian city with – [checks notes] – canals instead of roads. Make sure to leave your van at the perimeter before entering the city, or you risk inventing #submarinelife.

The Gold Coast is the most popular spot in Australia to pull up the handbrake and reach for the selfie stick. It helps that the Gold Coast looks a lot like a tropical paradise if you get the angle right. It also helps that local city-dwellers can reach the beach quicker than they can reach the supermarket. Heck, why not take the G:link down and pose in front of someone else’s van while the owner is busy surfing?

Sydney is another popular starting point for folks who want to set out on an epic trip – or just the odd weekend camping. Van-lifer @maxandivyontheroad has plenty of tips on destinations in and around Sydney, and plenty of tips about caravanning with kids, too. 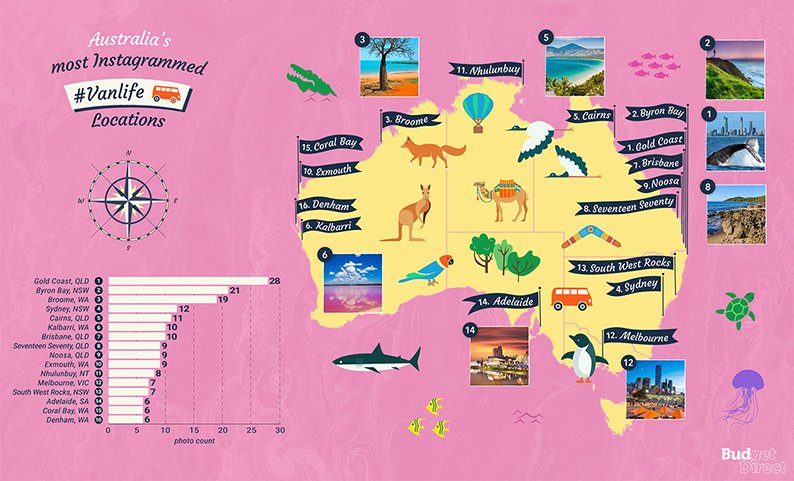 The best US states to experience the #vanlife

It should be no surprise that California is the unofficial capital of #vanlife in the United States. Enthusiasts post three times as many #vanlife-tagged pictures in California than in the next most van-some state (Colorado). LA is the top spot, but San Diego is a sleeper hit thanks to its welcoming vanlife community and abundance of the kind of things van-dwellers tend to like, such as vegan food, yoga, and – uh – nudist beaches.

Oregon is also up there as a popular state for the vanning community. And its largest city, Portland, boasts the lion’s share of #vanlife hashtag usage in the state, with its eco-friendly reputation and wealth of gardens and bicycle paths. 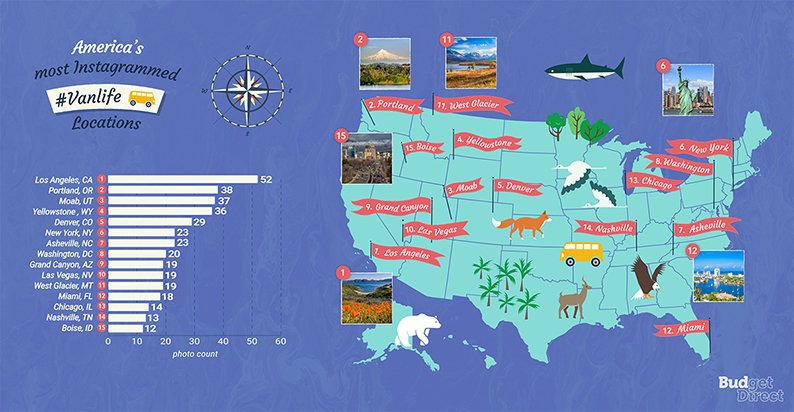 A view that’s worth the drive

Spending hours on the road in a van can be difficult. There’s the cramped conditions, the risk of breaking-down and, unless you’re in some kind of deluxe model, the lack of facilities. But with a #vanlife none of that seems to matter because you’re having an adventure. You’re travelling to some of the world’s most beautiful and exciting locations and discovering views that are worth the drive.

Living the #vanlife can mean one week you’re putting on snow chains to navigate the frost-bitten peaks of Banff and the next you’re blasting the AC to stay cool in LA rush hour. Having a home (or holiday home) on wheels means that the world is your oyster.

Check out some of the stunning views you could see with your own eyes if you visit the world’s most Instagrammed #vanlife locations.

#vanlife is that weirdly modern place where the freedom of the open road and the rejection of civilization’s clutter meets the glamour of the phone-wielding Instagram influencer posing outside their clapped-out camper van. Is it a lifestyle you’re eager to try, or are you happy to watch it unfold in photos from the comfort of your sofa?

We used custom scripts to collect metadata from 25,000 images posted on Instagram with the tag #vanlife. In total, 10,669 of the 25,000 images collected had location metadata indicating a town or city. We totalled up the locations to create our league tables and used location coordinates via a batch geocoder to produce a map of all the coordinates in the metadata.

For the full research behind this ranking, including the sources visit http://bit.ly/VanLifeLocations