Standing at 134 metres high, it‘s the largest steel arch bridge in the world and one of the most iconic landmarks in Sydney. Fondly nicknamed the Coathanger (for obvious reasons), the Sydney Harbour Bridge is now synonymous with “The Emerald City”, but it could have looked very different.

In 1900, the government organised a worldwide competition for the design and construction of the harbour bridge. More than 70 designs were proposed, all of them were rejected. Dorman Long eventually won the contract in 1924 after successive competitions.

But did the judges make the right call? We wanted to find out what Australians really think, so we created realistic renderings of some of the most interesting entries and asked 1000 people to choose their favourite.

Norman Selfe proposed this design in 1902. His design was actually accepted by the New South Wales authorities, but the story doesn‘t end there; An economic slowdown resulted in a change of government, the incoming government then rejected the whole project, so the bridge remained unbuilt. Selfe might not have won this one, but he was successful and well-regarded enough to have an area of the city (Normanhurst) named after him during his lifetime, so it‘s not all bad. 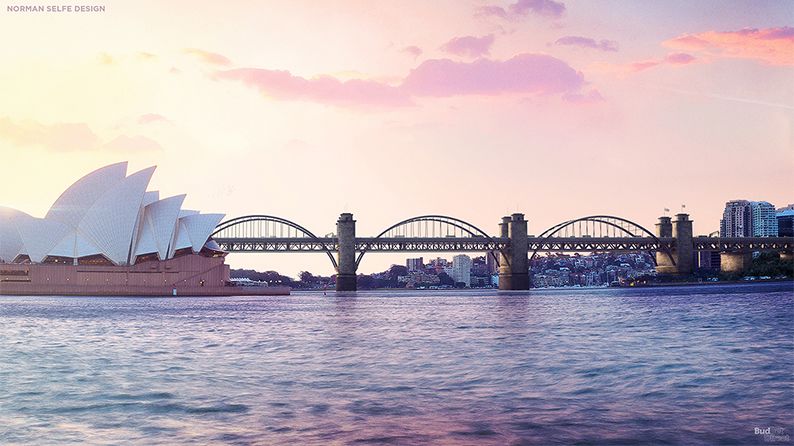 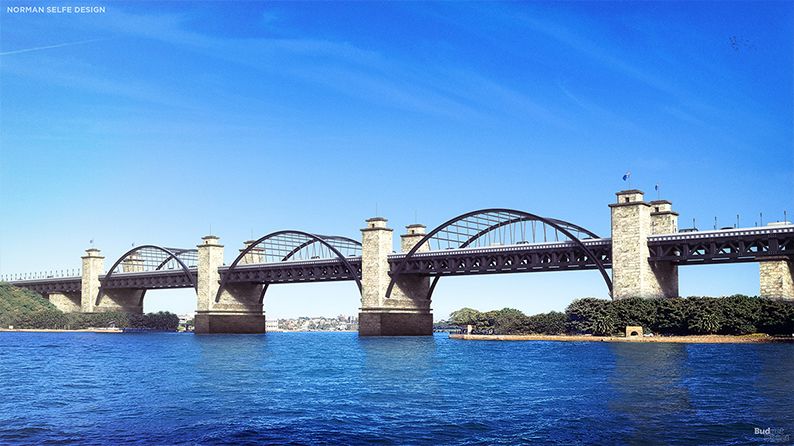 The eventual winners of the 1924 competition and creators of the bridge we know and love today Dorman Long & Co submitted a total of seven tenders, these are two of the alternate designs they proposed. This design was for a cantilever bridge with the centre span of 0.49 km (1,600 feet). The plans failed to meet the required specifications because they used precast concrete blocks rather than granite. 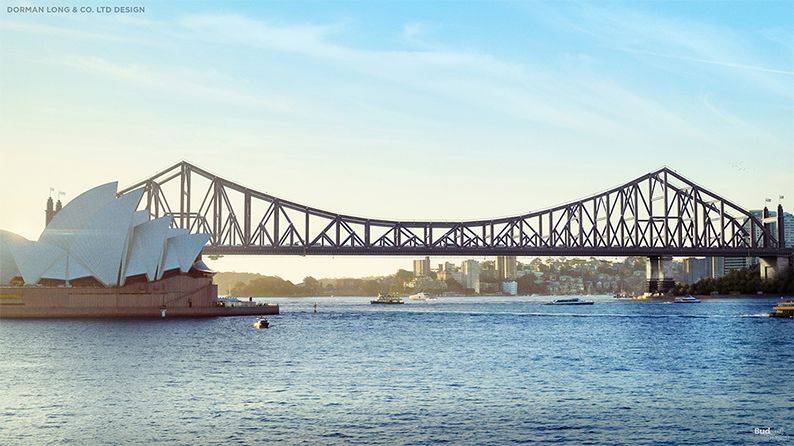 This other design by the company was considered by judges to be “simple and elegant, but aesthetically too severe for its setting”. Keep trying guys, you‘ll get there in the end. 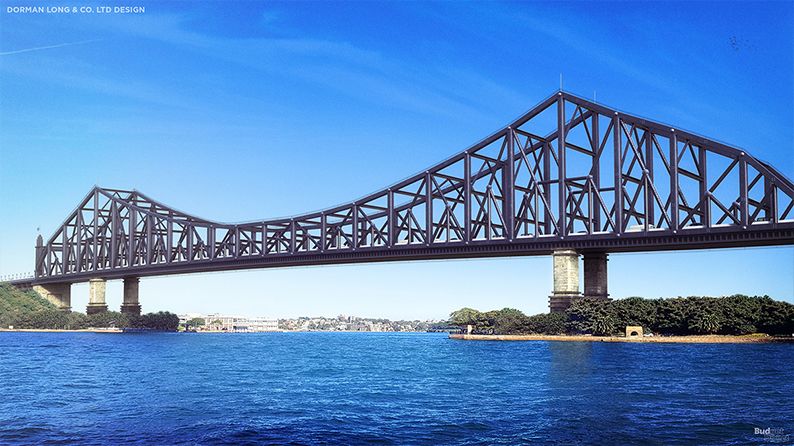 Francis Ernest Stowe submitted this radical design in 1922. This one also almost got made, the bizarre three-way structure was only narrowly rejected by the government. Stowe‘s design links Balls Head, Miller’s Point and Balmain, meeting in the middle with a central tower on Goat Island. He argued that his design was cheaper and quicker to implement than the other designs and would avoid the destruction of the North Shore. The central tower was designed to double as a war memorial, with Goat Island renamed Anzac Isle. 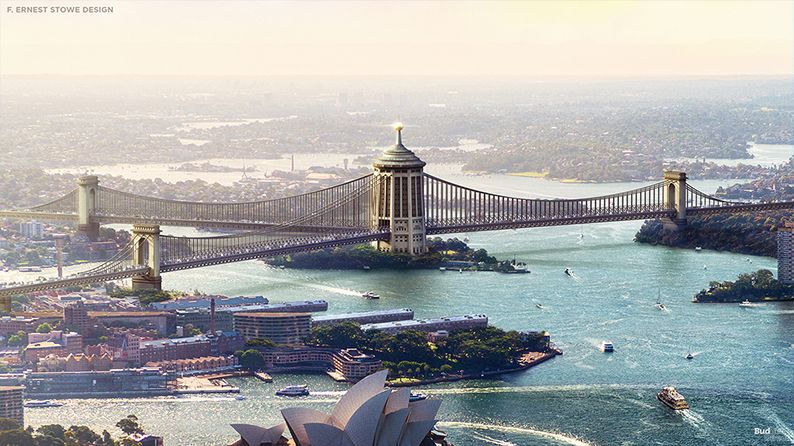 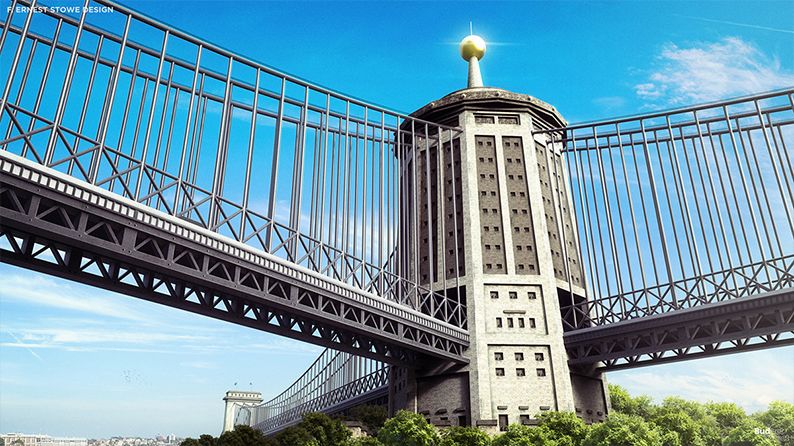 One of the earliest known plans for the harbour bridge was this design from Peter Henderson, but he wasn‘t the first person to moot the idea of a better solution for moving people across the city. There had been plans to build a bridge as early as 1815, when architect Francis Greenway proposed to Governor Lachlan Macquarie that a bridge be built to connect the northern and southern shores. In 1857 P.E. Henderson proposed the construction of this bridge from Dawes’ Point to Milsom’s Point on the North Shore. 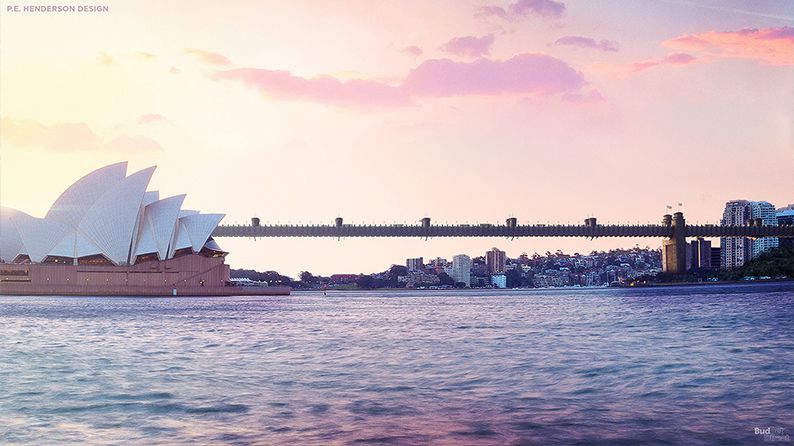 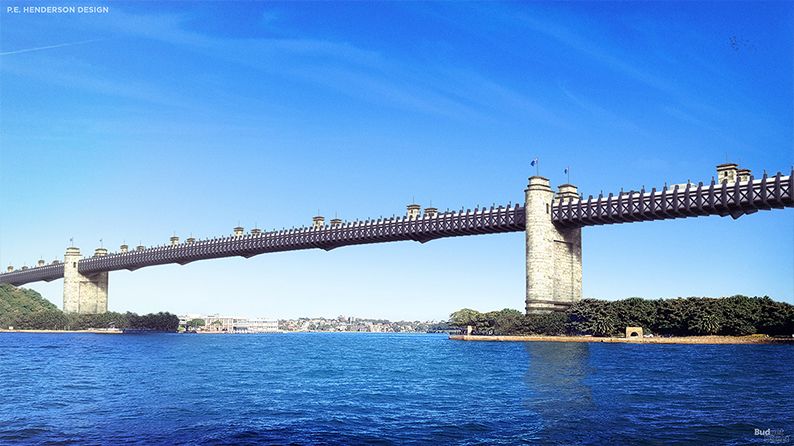 Two American architects, Robinson & Steinman created this design for the tender in 1924. The proposed designs combined the principles of both cantilever and suspension bridges and said to be a suspension bridge of novel design more rigid than any other at the time. It wasn‘t popular though, the official report bemoaned the overall appearance of the design, saying that “the bridge would not have a pleasing outline”. Despite this setback, the pair would successfully design bridges all over the world. 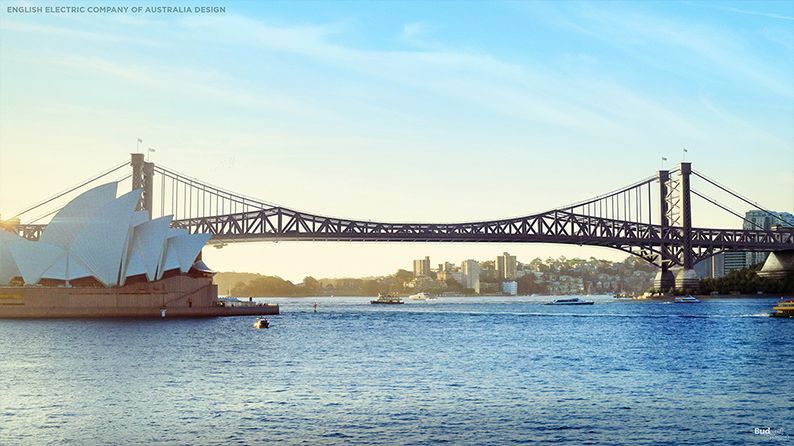 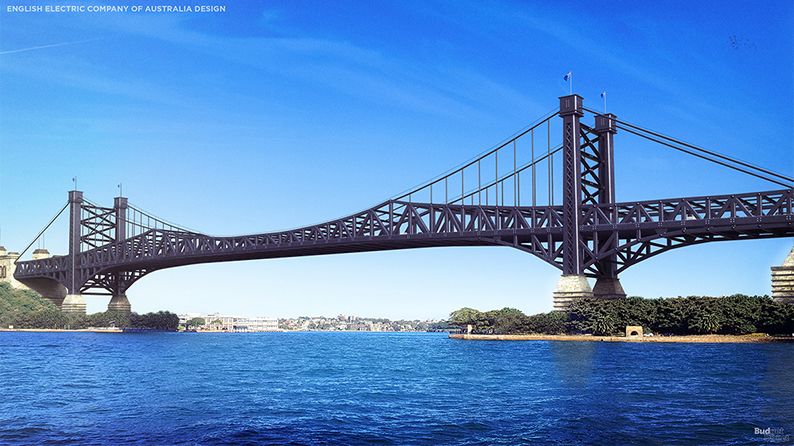 This American steel manufacturing company was involved in the construction of the George Washington Bridge and the Golden Gate Bridge. It submitted this design, along with a number of others for the 1924 competition. Their designs incorporated cantilever bridges, suspension bridges and an arch bridge.

This design was not favoured and judges, who felt it wouldn‘t “harmonise with its surroundings.” 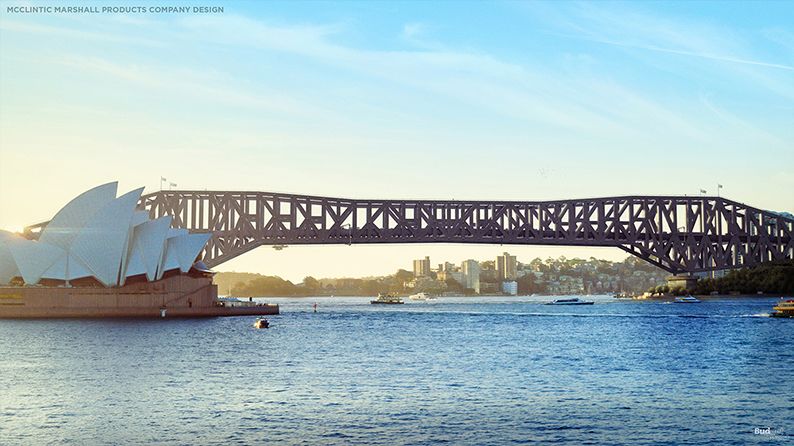 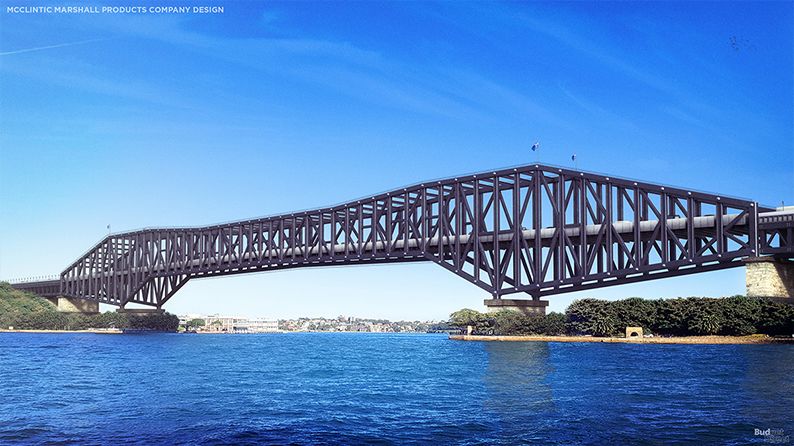 As you can see, as far as the participants in our survey are concerned, the judges did eventually make the right decision when they awarded the contract to Dorman Long & Co. Ltd. 61.8% said the winning design was their favourite. The next most popular was Norman Selfe’s design, with 10.4% of the votes. The least popular was McClintic Marshall Products Company’s design, showing that modern Australians agreed with the judges about the design‘s failure to harmonise with the surrounding area.

The iconic bridge took eight years to build, using 53,000 tonnes of steel. Nowadays, millions of people walk and cycle across the bridge or climb to the top to enjoy the stunning views every year. It might have taken four public design competitions over a 24 year period to decide what this bridge would look like, but according to Australians the right decision was made in the end.

Official tenders for the other entrants in the 1924 bridge competition were primarily sourced from the Sydney Harbour Bridge website run by New South Wales Government.

Then our researcher gathered additional information on each individual entry. The most helpful sources were historical newspapers stored within the National Library of Australia’s Trove website. Additional information and mock-up images were sourced from local websites and news stories.

To gather feedback on the designs we created a google survey that went out to 1000 Australians and asked them to choose their favourite design out of 7 designs (the 6 above and an image of the current Sydney Harbour Bridge). The images were shown without names so as not to influence their choice.

Davis, A. (2016). What the Sydney Harbour Bridge could have looked like: Historic bridge design reveals a very bizarre three-way structure. dailymail.co.uk

One photo, four seasons: a year in 8 places around the world