An often cited myth regarding the past is that most people never journeyed more than 20 miles from home. This is plain foolishness. As long as human beings have existed, they have travelled. And when people wander, they need a place to stay.

In Japan, the traditional inn culture (called “ryokan”) sprang up 1300 years ago. In the Middle East, the Turks developed “caravanserai” for merchant caravans. In medieval Europe, most would prefer to stay at a monastery, but inns were an important option for merchant towns. Some of these historical way-stops still exist to this day. Thus, we proudly present to you the oldest operating hotels in (nearly) every country. 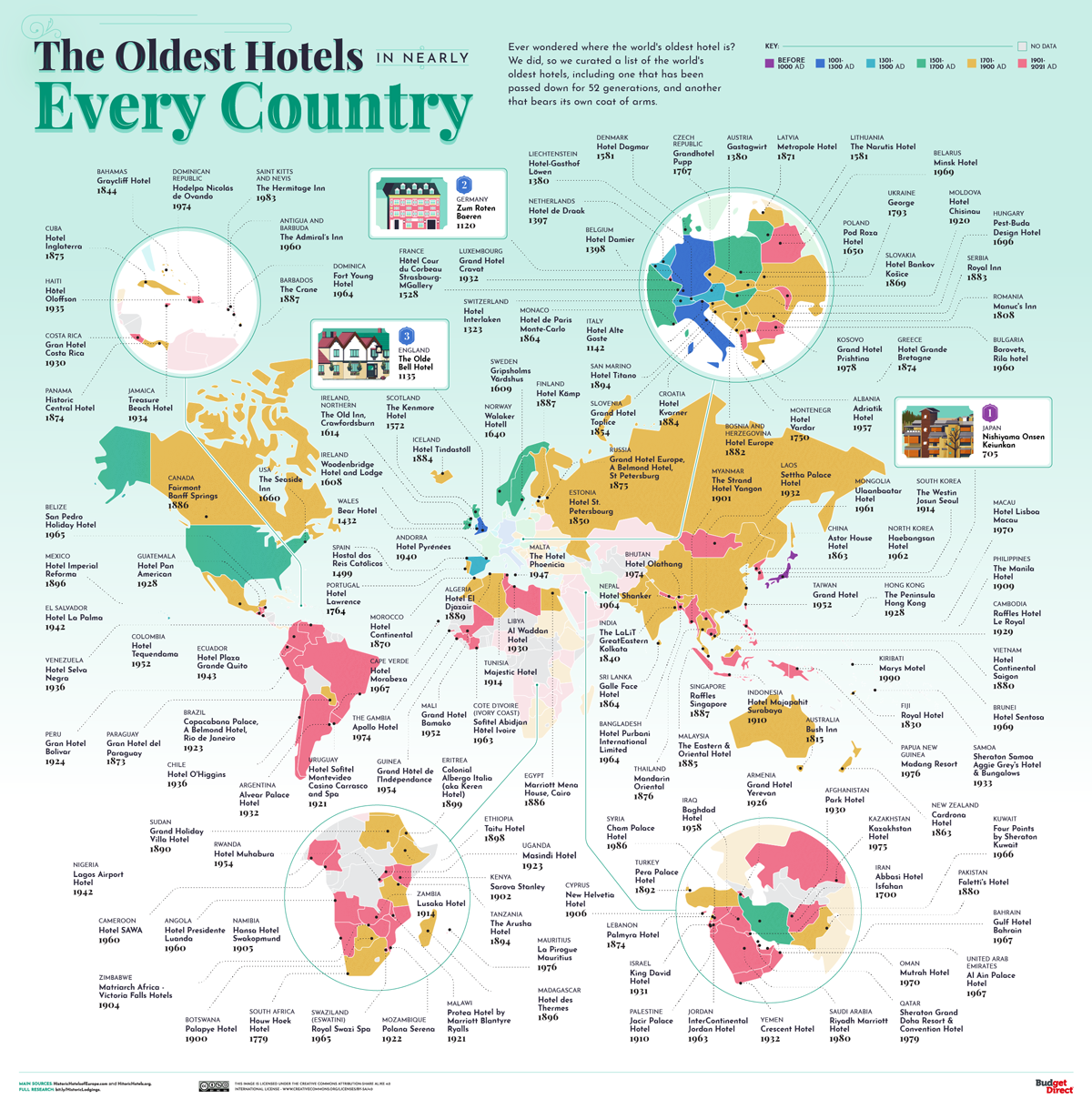 The Top Ten Oldest Hotels in Their Country

Explore the gallery to see all top 10

We partnered with artists to evoke the charm of the world’s most venerable hotels. Virtually explore these treasures of hospitality, from the monastic-inspired coziness of England’s Olde Bell to the fine wines of Liechtenstein’s Gasthof Löwen. Four centuries older than its European competitors, Japan’s Nishiyama Onsen Keiunkan takes the top spot. 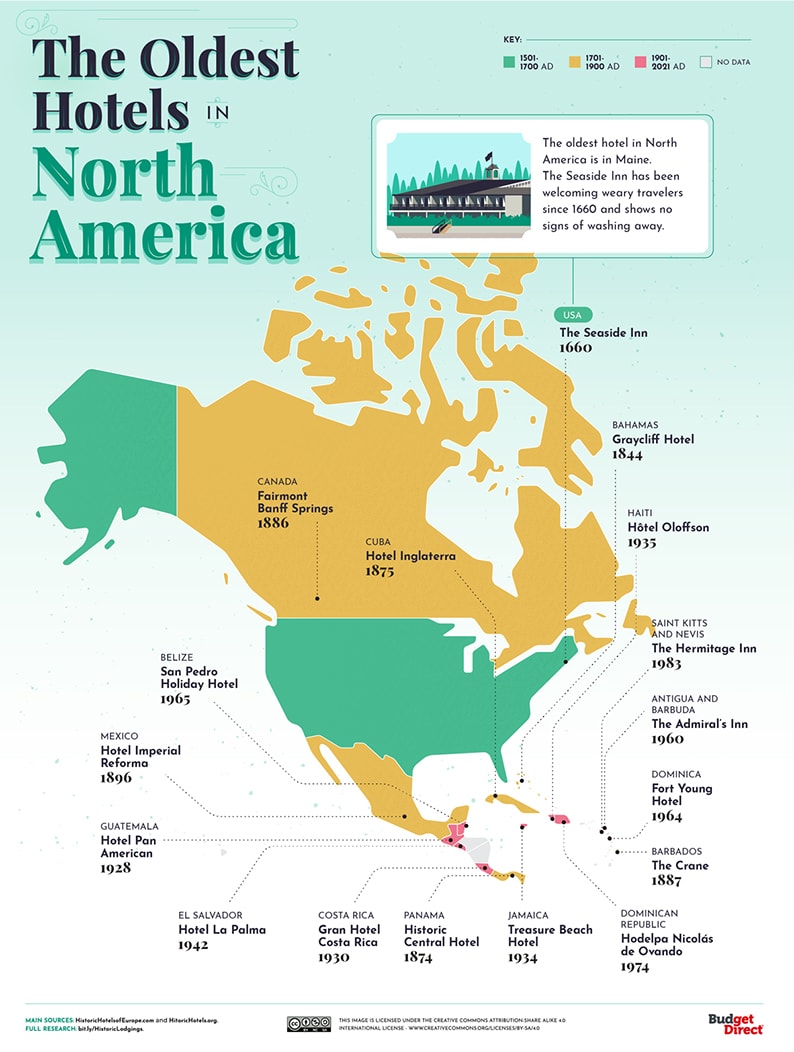 While it may seem like small potatoes compared to Japan’s ryokan, Seaside Inn of Kennebunkport, Maine, has been operated by the same family since 1756. The Gooch-Mason family is so established in Maine lore that their members appeared in Kenneth Roberts Revolutionary War novel Arundel. The inn itself is even older, dating back to 1660.

The oldest hotel in the Caribbean has an even more colourful history. First a 17th century Anglican Church, then a pirate captain’s mansion (so the story goes), Nassau’s Graycliff Hotel has hosted the likes of Winston Churchill, former King Edward VIII, and the Beatles. In 1873, Italian eye-doctor doctor Silvio Andrazzi emigrated to Paraguay and purchased a private estate for the purposes of founding a hotel. His establishment entertained Paraguayan presidents with its theatre, ballroom, and gardens; a dedicated rail line likely assisted in acquiring this prestigious patronage. Known as the ‘Cancha Sociedad’ under Dr Andrazzi, the Gran Hotel del Paraguay was given its current moniker in 1921.

Europe: Gasthaus zum Roten Bären Is an Old Friend with a New(ish) Face 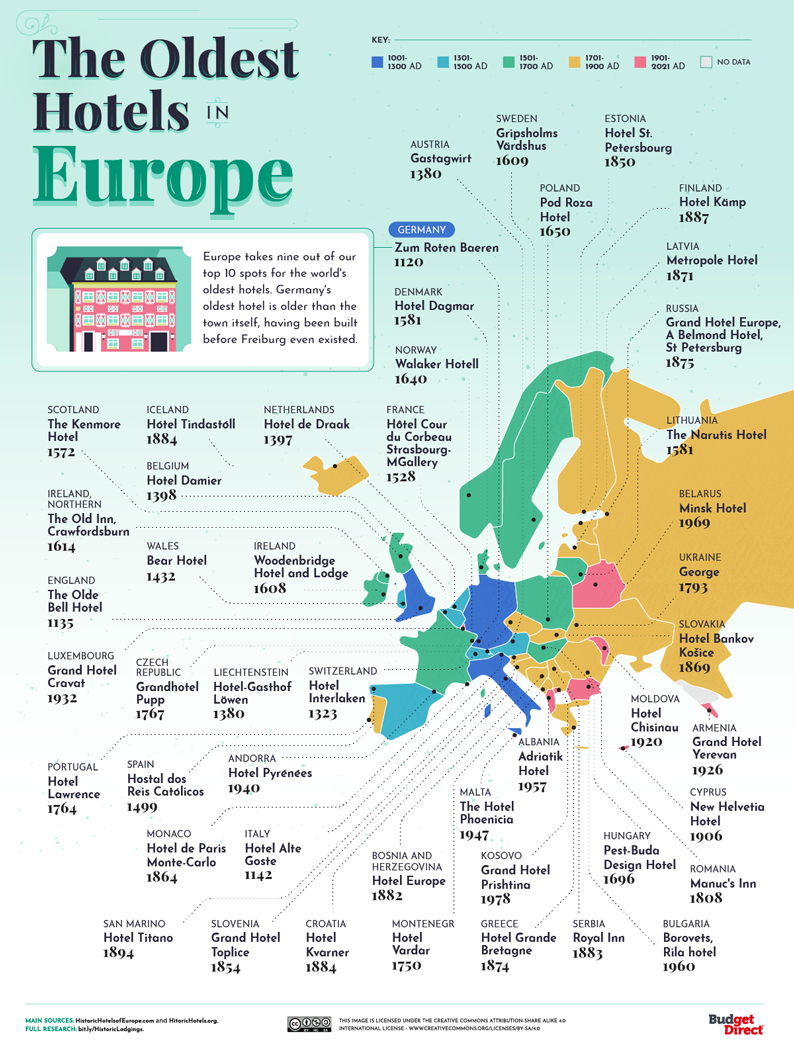 In the Black Forest of Germany waits an extremely hospitable bear. Parts of Gasthaus zum Roten Bären (“Red Bear Inn”) have existed since before the surrounding city was founded in 1120. Though most of the inn was rebuilt in 1718 (after suffering an unfortunate encounter with the French), it possesses a basement pillar that has stood for 1,000 years. There are records of the building operating as an inn since at least 1387.

On the European map, England and Italy’s oldest hotels also date from the 12th century. In fact, Europe rounds out nine of the top ten spots worldwide. 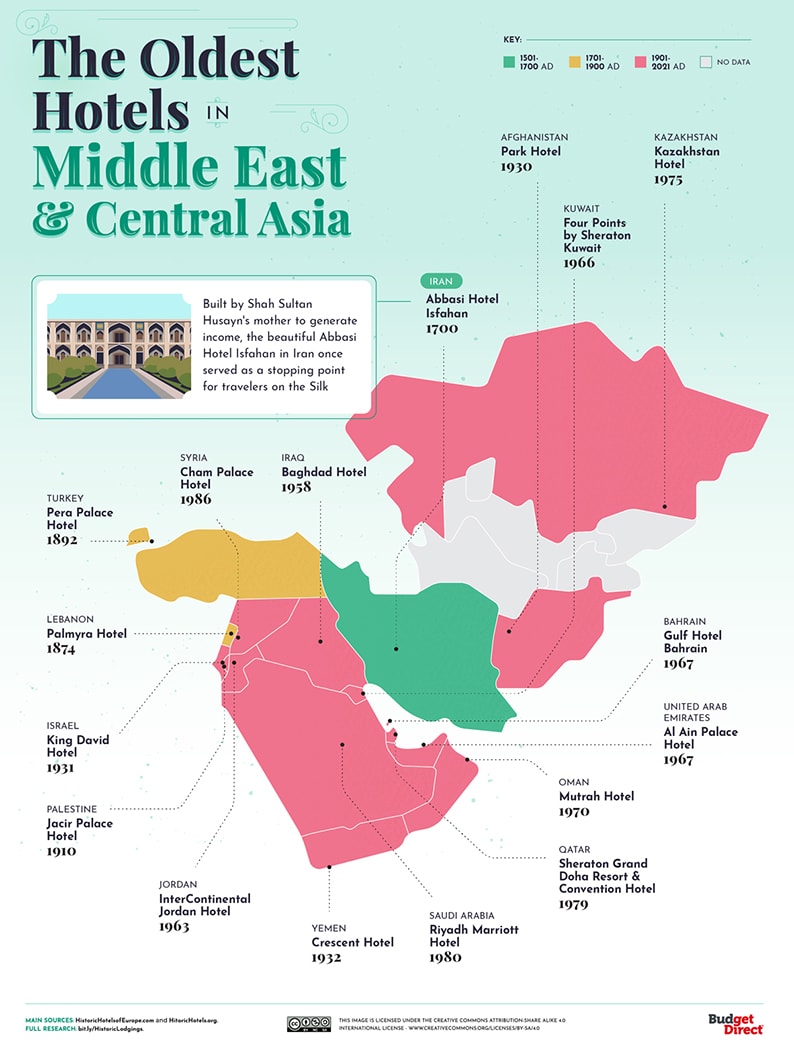 Nearly all surviving historic hotels in the Middle East date from less than 150 years ago. There is one luscious exception: Iran’s Abbasi Hotel. It was built in 1700 by the mother of Shah Sultan Hasayan, who would later donate it to a theological school. As it was built along the Silk Road, Abbasi was technically a ‘caravanserai’—that is, a traditional Middle Eastern inn with a central courtyard built to shelter caravans along trade routes.

Abbassi was renovated in the 1950s as a modern hotel. However, it still treats travellers to a truly dazzling display of traditional Iranian decor. 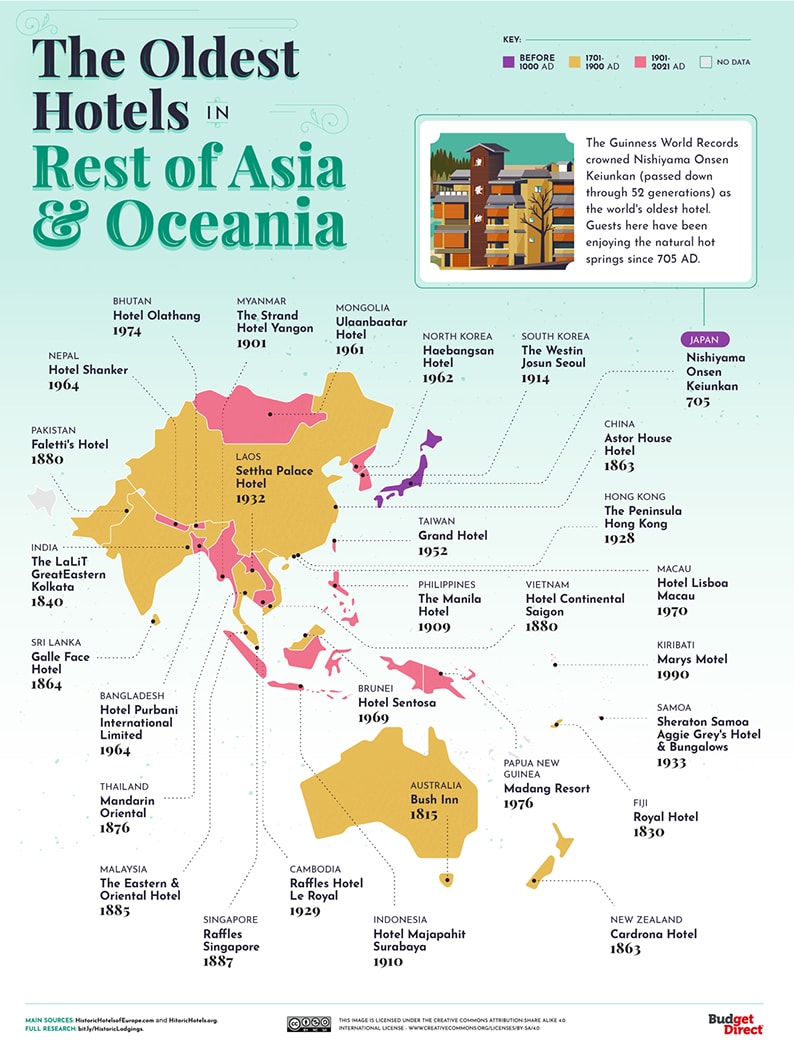 Asia boasts a strong showing of hotels from the 19th century, but Japan’s Nishiyama Onsen Keiunkan makes them all look like infants. Founded in 705, it has been operated by the same family for its entire history! For 1300 years, Emperors and Shoguns have luxuriated in the natural hot springs feeding the inn’s baths.Renovations in 1997 preserved the original layout. The inn offers guests a true ryokan experience—traditional woodwork, tatami mats, low Japanese seating…and no wifi. 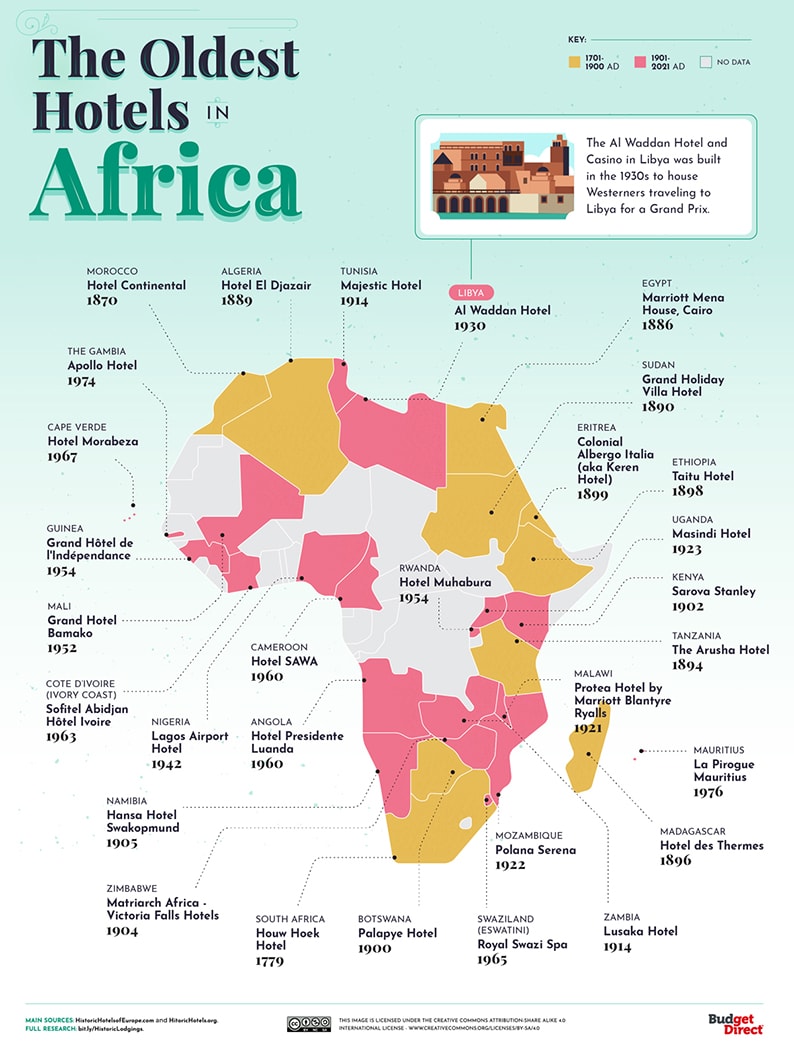 Africa’s oldest hotel is the Houw Hoek; it was built as a small inn for travellers heading to and from Capetown in 1779. Today Houw Hoek has expanded into a large complex of tennis courts, swimming pools, conference centres, and wedding venues. The centrepiece, however, remains a massive blue gum tree planted in 1850.

The oldest surviving hotel in North Africa got its start nearly a century after Houw Hoek. Tangiers’s Hotel Continental treats visitors to traditional Moroccan architecture, a lush common area, and a panoramic view of the bay.

Nothing compliments a hard day of raiding Spanish galleons or driving camel caravans like a rest at a luxurious inn. From sensational hot spring baths to humble seaside stays, hotels represent some of the most successful and enduring institutions across the world. Feeling the wanderlust of our historical forebears? Travel the paths of the past with our maps.

Senthamil, V. (2018). The world’s oldest hotel is in Japan and still open for business. architecturaldigest.in.

Seaside Inn. (2021). About Us. kennebunkbeachmaine.com.

Michelle. (2016). This Is The Oldest Inn Operating In Maine And It’s Truly Charming. onlyinyourstate.com.

All About Japan. (2016). The Three Oldest Hotels in the World. allabout-japan.com.

Yabai Writers. (2017). The History and Culture Behind Japan’s Unique Kind Of Inn; The Ryokan. yabai.com.