Spotify is known for its chilled playlists and calming study mixes. But what if you’d prefer the streaming service to take you on a musical adventure?

Our new Spotify world map shows the most popular songs with each country’s name in the title. We searched the app for every country’s name and picked out the songs with the most plays. Some are international hits; others are little known secrets of the musical universe.

The songs on our map are the unofficial national anthems that most caught the public’s imagination – and got our feet tapping. Where will your musical journey take you next?

The World In Song

One of the largest song titles on our world map is also the most-played track. China, by Anuel AA, has been streamed an astonishing 631,980,232 times. This reworking of Shaggy’s “It Wasn’t Me” doesn’t mention China in the lyrics, but “the original rhythm had strong Chinese elements, hence the name of the song,” claims Anuel AA.

Some countries lend their names to song titles more easily than others. Such places have famous mainstream songs like Voodoo Chile (Jimi Hendrix) and Russian Roulette (Rihanna) on our map. Other songs became popular due to their unique selling points, such as Don’t Cry For Me Argentina (made famous by the Evita musical and then Madonna) and Walk Like An Egyptian (which inspired its own dance craze). Some country names just aren’t made to become chart hits – after all, nothing rhymes with Kyrgyzstan. 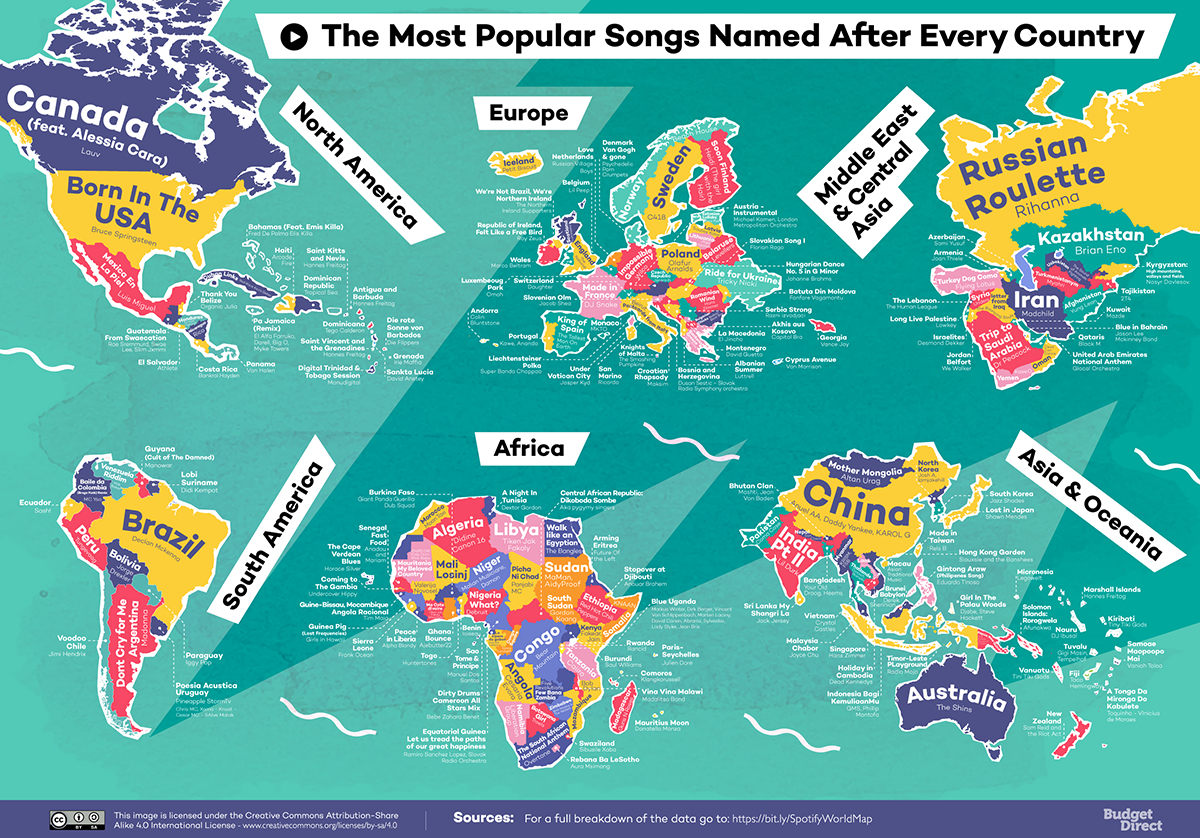 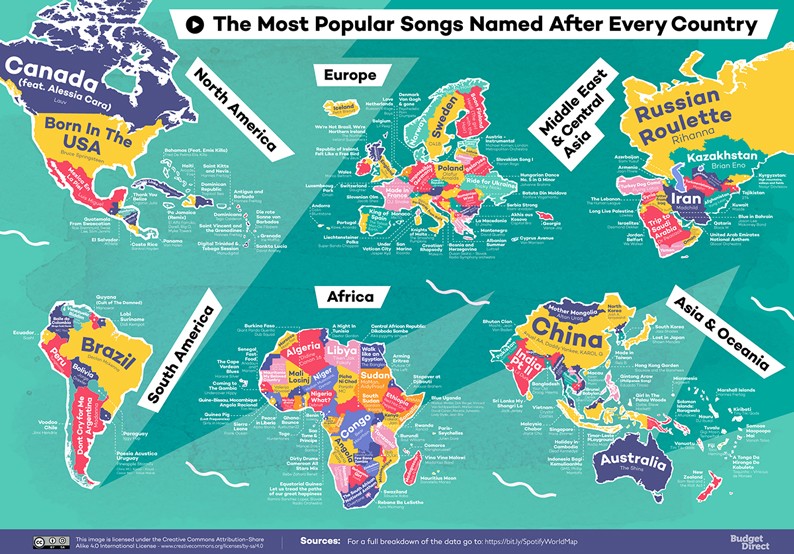 As you read on about the unofficial national songs across the continents, why not listen to the Spotify playlist we made to go along with our maps?

Every July 4th, tens of millions of Americans type “Born In The U.S.A.” into Spotify’s search bar. No wonder it’s the top song with ‘U.S.A.’ in the title! Rather than a celebration, though, Bruce Springsteen’s rousing anthem is actually a bittersweet reflection of the treatment of returning Vietnam vets and the plight of the American blue-collar class.

The most popular ‘national’ song in North America amounts to “way more than a two-dollar holla.” Guatemala, by Rae Sremmurd, was released shortly before the devastating Guatemalan volcano eruption of 2018. The song’s video became a focal point for fundraising operations in response to the disaster. 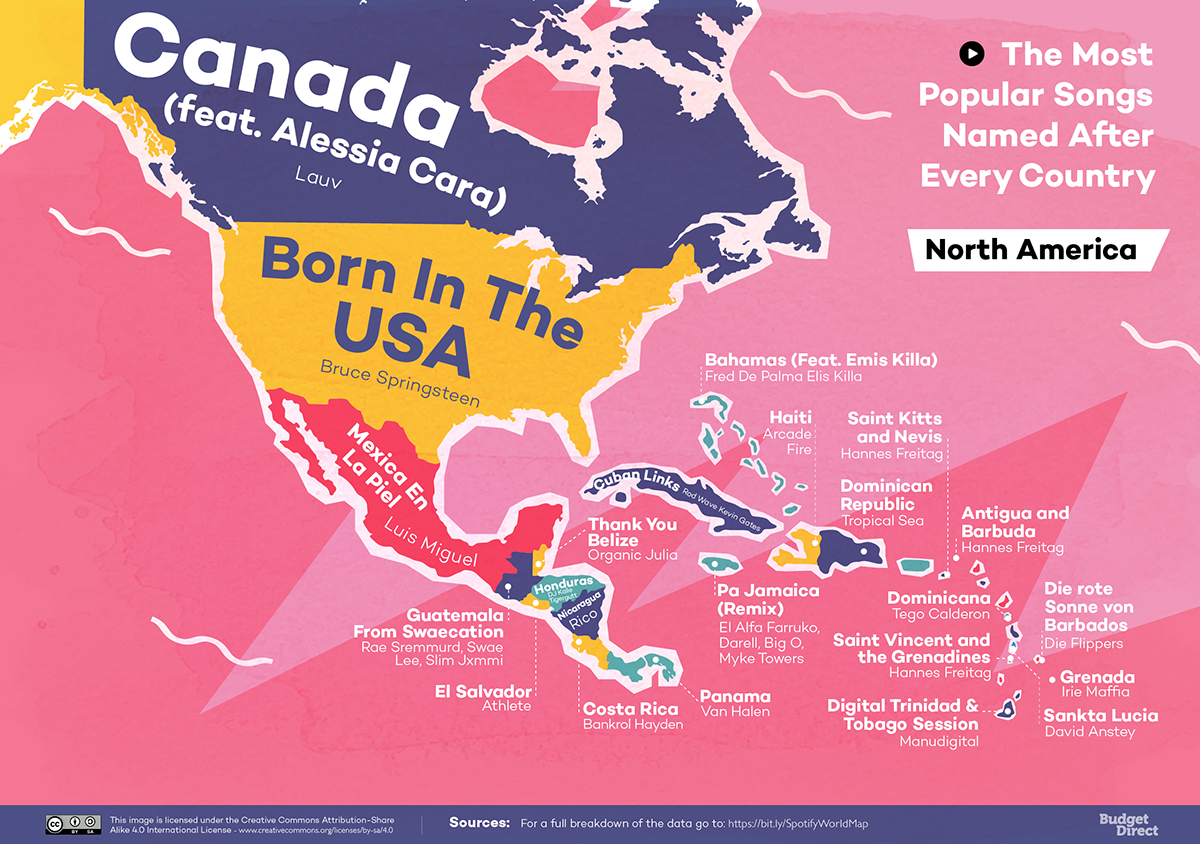 South America has inspired a lot of iconic music over the years. The ‘Brazil’ that represents Brazil is not the much-covered 1939 samba, but 16-year-old Declan McKenna’s response to the economic inequalities surrounding the 2014 FIFA World Cup. It has over 100 million streams on Spotify.

Iggy Pop, the “Godfather of Punk,” shows up in Paraguay thanks to the closing song of his 2016 album, Post Pop Depression. Listener discretion is very much advised, as the language is very colourful – and it isn’t Guaraní! All kinds of musicians have namechecked European countries, from rockers to Rihanna, and from film composers to the Slovak Radio Symphony Orchestra. The orchestra made it on the map thanks to their version of the national anthem of Bosnia and Herzegovina, the least-listened to ‘national song’ on our European map.

The most-listened-to in Europe is Georgia, by Australian singer-songwriter Vance Joy. It’s actually about a girl called Georgia, but maybe she’s from Georgia?

It takes a pioneer to go where other musicians dread. Brian Eno is the pioneer in question, and he solved the problem of ‘how to fit Kazakhstan into a song’ by writing an ambient instrumental piece with no lyrics. Eno’s Kazakhstan accompanied Asif Khan’s 2017 “We Are Energy” installation at the Astana Expo in the country’s capital, Nur-Sultan.

To the west, Jordan is represented by Spotify’s “#1 College Song” of 2015. Jordan Belfort by Wes Walker is named after Leonardo DiCaprio’s character in the movie Wolf of Wall Street rather than the Arab nation on the River Jordan. But that’s no reason for Jordanians not to get down to the hip-hop beat. 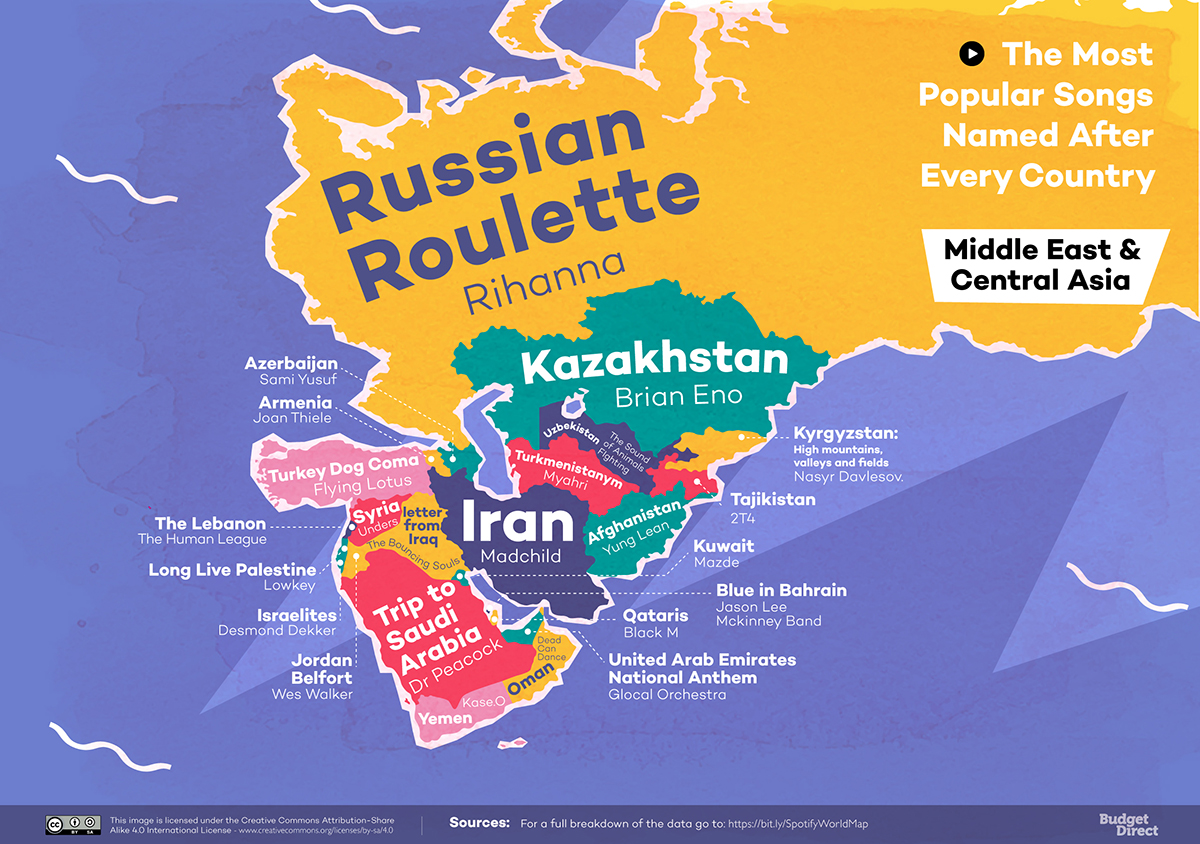 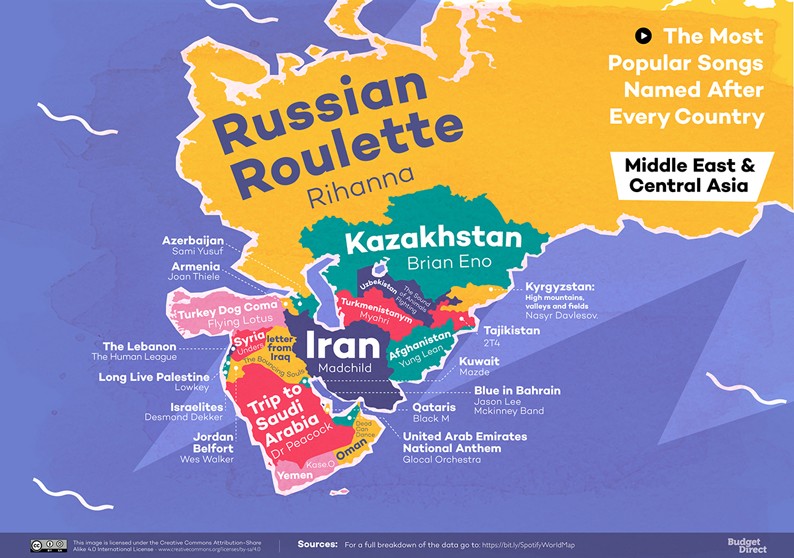 Australia is an epic experience for a lot of touring musicians, and the country has lent its name to numerous songs. The most popular on Spotify is Australia by The Shins, a pop-rock number about the drudgery of work. The song charted well in 2007, but its popularity later surged when it featured in the video games Project Gotham Racing 4 and Rock Band.

The Kingdom of Tonga is represented by one of the sweetest slivers of music on our map. A Tonga Da Mironga Do Kabulete is a short samba by guitarist Toquinho with the great poet Vinícius de Moraes. 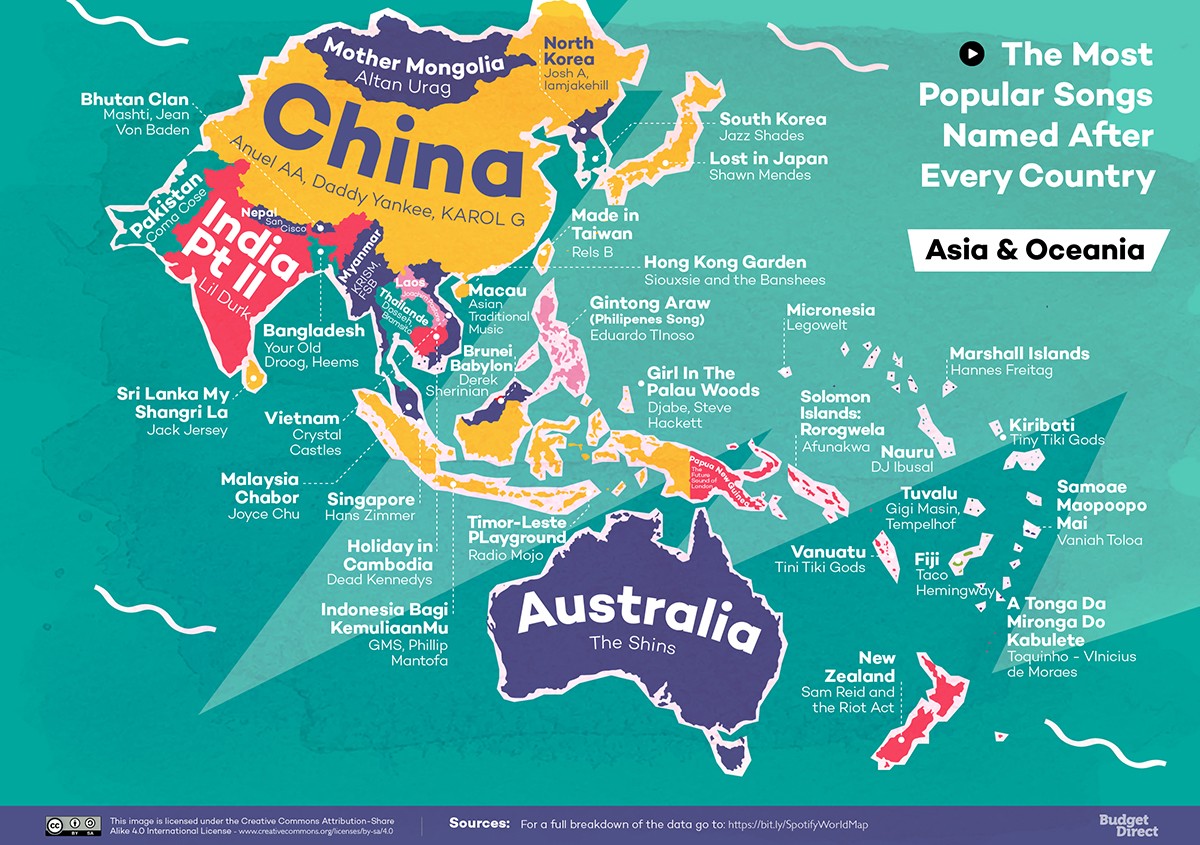 Equatorial Guinea has the honour of the least-played national song on our list. The national anthem has just 1,418 plays (and rising). The full title of the song is “Let Us Tread the Path of Our Immense Happiness,” but Spotify includes the country’s name in the listing. After all, there aren’t many songs named after Equatorial Guinea.

Aside from Walk Like An Egyptian, the most-streamed song on the continent is Frank Ocean’s saucy tale of a boy from Sierra Leone whose teen romance quickly turns to teen parenthood. Sierra Leone wasn’t released as a single but scored high thanks to the songs place on Ocean’s gold-certified debut album.

It’s only a shame our map doesn’t have songs for entire continents: Toto’s Africa is a bona fide Spotify legend! 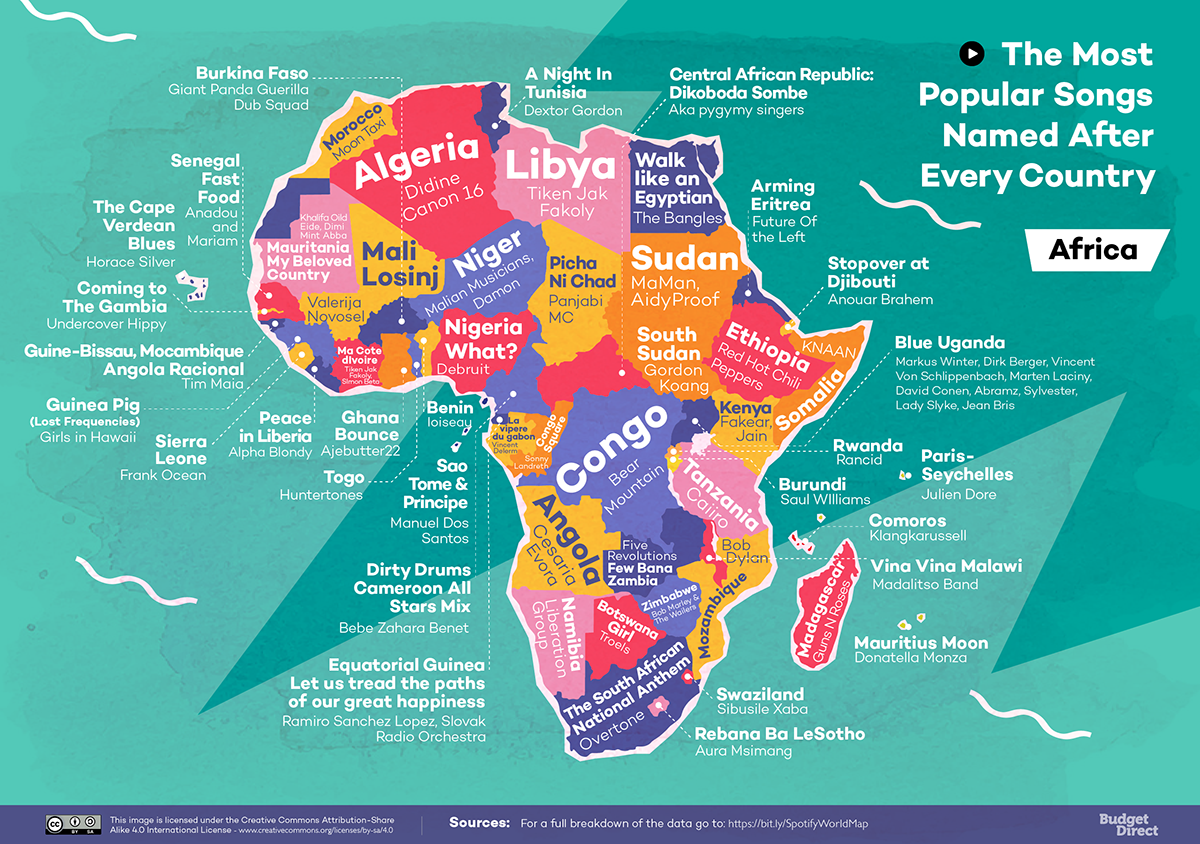 So, that’s what the world map would be like if it featured song titles instead of country names: a curious mix of national anthems, nostalgic bangers, cultural stereotypes, and wanderlust. But of course, the number of Spotify streams is just one way to measure each country’s ‘unofficial national anthem.’ Which songs would you replace if you could add your favourites?

To create these maps, we started by searching for each country’s name on Spotify, refining the search into just songs. Next, we selected the songs with the highest popularity and singled out the song that had the most plays for each country. We used the 2nd most popular song for countries that share a name (e.g., Republic of Ireland and Northern Ireland).

For a full breakdown of the data go to: https://bit.ly/SpotifyWorldMap