Hey, you down there! The world’s greatest architects spend hundreds of hours perfecting the visual impact of their buildings from every angle: inside, outside, from street level, and from the air. But who gets to see these incredible structures from above?

This is how it feels to look down on the Eiffel Tower, Sydney Opera House, and other iconic landmarks as daily life continues around them. Just watch out for low-flying spacecraft! 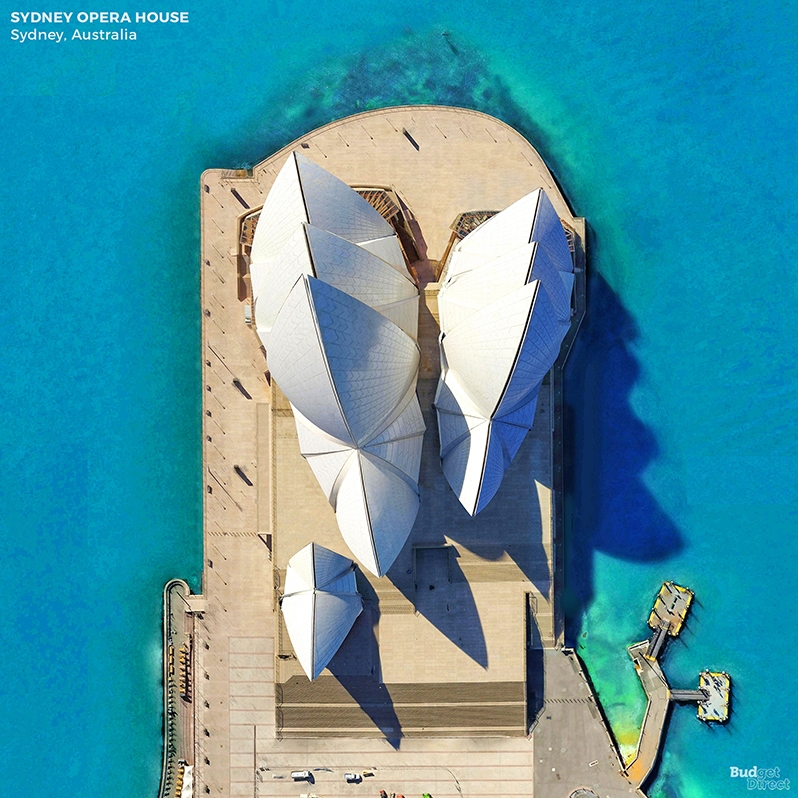 “With Kronborg in mind,” wrote Sydney Opera House’s architect, Jørn Utzon, “I was convinced that a new building in such a position as to be seen from all sides, had to be a large sculptural building.” Utzon was keenly aware of how the structure would occupy Sydney Harbour since he lived near Kronberg Castle, which occupies a similar position beyond a steep drop, sandwiched by the coasts of Denmark and Sweden.

“All sides” surely included the view from the top. Utzon designed the white tiles of the shells to reflect the sky’s changing hue throughout the day. As architect Louis Kahn described it, “the sun did not know how beautiful its light was, until it was reflected off this building.” 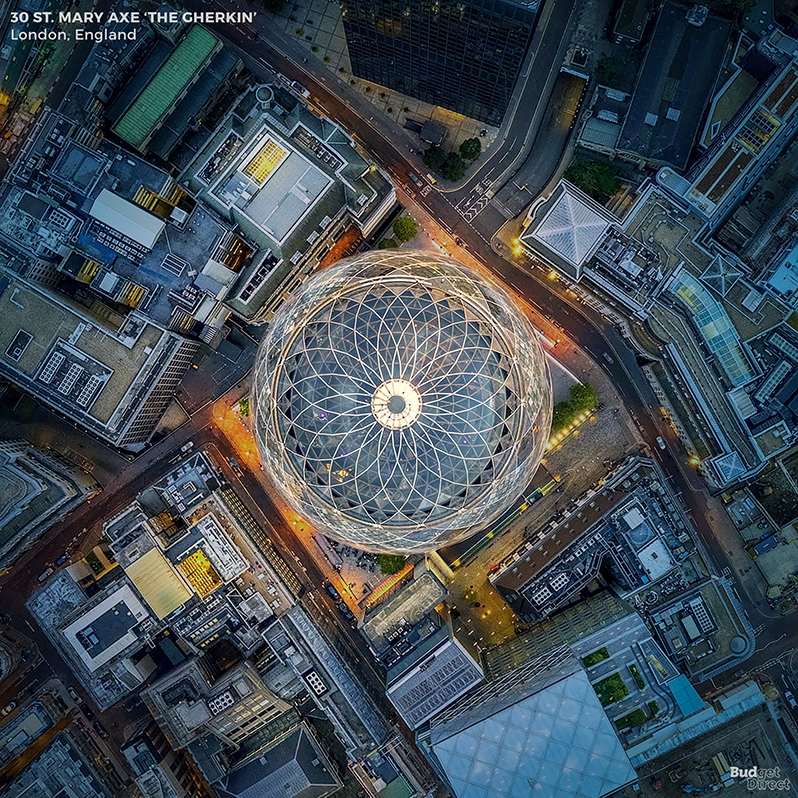 You need to levitate 180m to reach the top of London’s second-tallest building. On the way up, you’ll notice that the building puffs outwards and then inwards again from its circular ground-level footprint. This leaves plenty of space for people to mill about like ants down on the ground while allowing for 47,000m2 of interior floor space.

The only curved glass in the building is the dome you’re looking down on at the top, which houses a ‘club room’ with 360-degree views over the capital. By the way, the ‘Gherkin’ isn’t actually shaped after a pickle, but a marine sponge: the Venus’ flower basket. 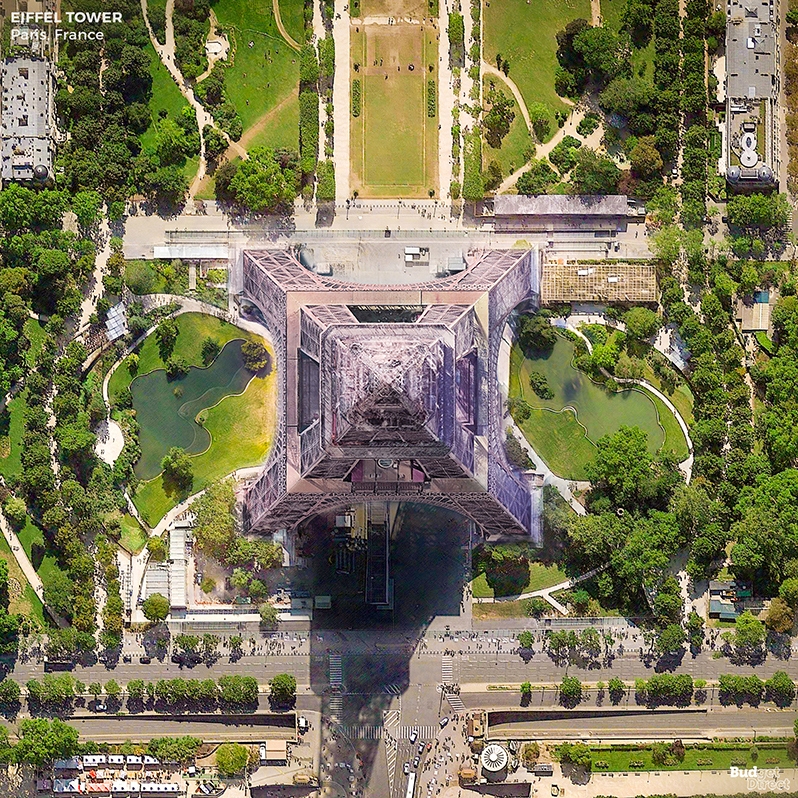 X marks the spot. Cuddled by kidney-shaped lawns at the tip of the Champ de Mars, it may take you a moment to identify the Eiffel Tower. The centre of the X is the meeting point of four iron lattice piers that begin on the ground 300m below.

But what we see from this privileged viewpoint is the tip, at 324m: a ‘bulbous filial’ designed by architect Stephen Sauvestre, Gustave Eiffel’s lead architect on the project. The tower was intended as a temporary ceremonial gateway for the Exposition Universelle de 1889, and Sauvestre was tasked with adding aesthetic flair to this incredible feat of engineering. 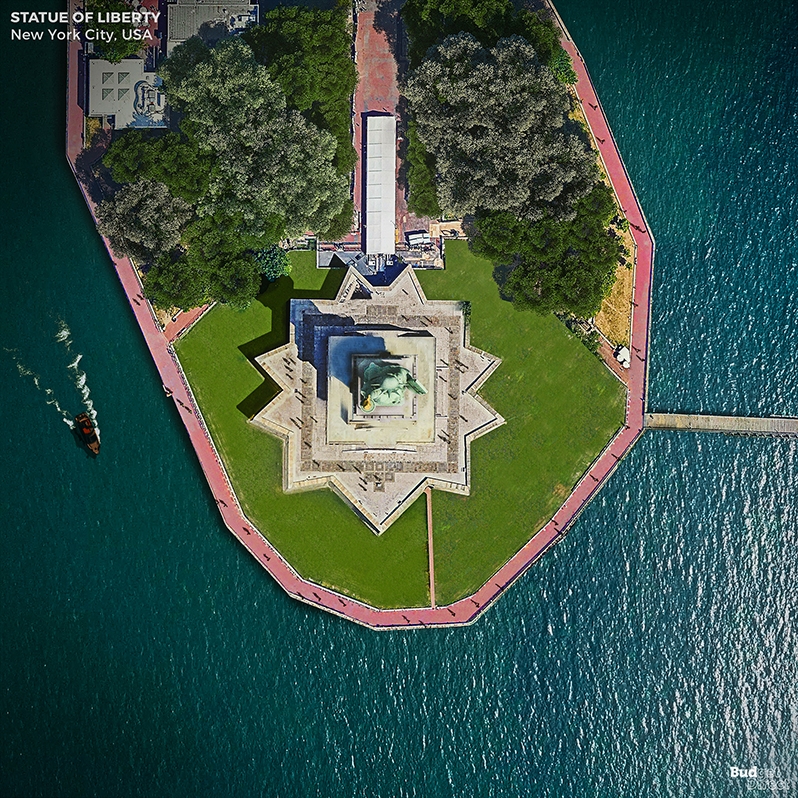 An aerial view of the Statue of Liberty offers a clear look at the 11-pronged star on which it sits. The star may look like it was designed for the purpose, but it is actually a former fort, built a year before the War of 1812 to protect New York Harbor. Tour boats and commuter ferries pass there today.

The statue was inspired by the abolition of slavery as much as the Declaration of Independence, and the torch represents enlightenment. Its flame was originally made of copper to shine in daylight, and over the years the panels were replaced with illuminated stained glass. However, your birds-eye-view reveals that today the torch – which was replaced in 1986 – is coated with 24-karat gold. 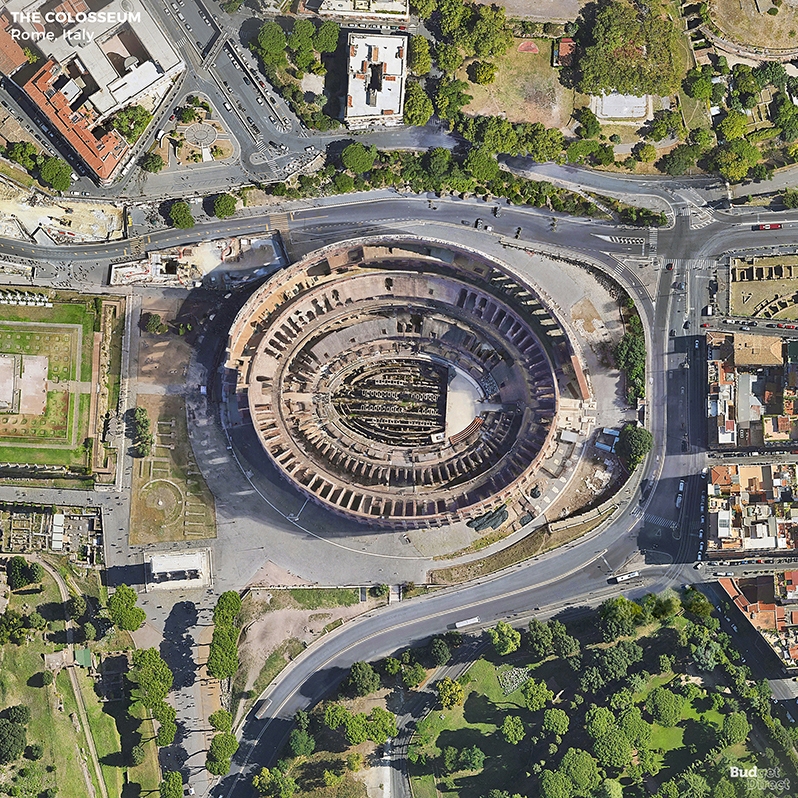 This head-down view of the Colosseum looks pretty different to when it was first built for animal hunts, executions, and gladiator battles, nearly 2,000 years ago. Somewhere between 50-90,000 people of all classes would have gathered here, protected from the sun by enormous vela (canvas awnings) wrangled by hundreds of strong men, probably from the Roman navy.

The Colosseum’s elliptical shape gave a good view of the games from any direction. However, the closer, lower seats were strictly for the upper classes. As blood sports fell out of fashion and the empire began to falter, maintenance was not kept up on the building. The decline began around the 3rd century CE, hastened by earthquakes and quarrying over the centuries. 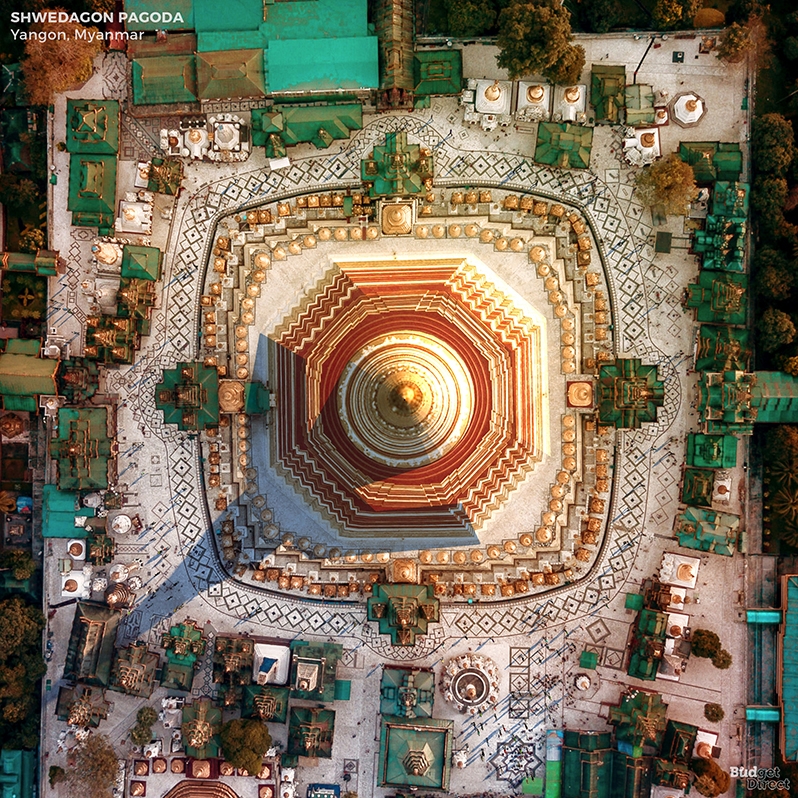 Legend has it Myanmar’s most sacred Buddhist stupa is 2,600 years old, making it the world’s oldest Buddhist stupa and the oldest landmark on our list. Scholars estimate it’s a remarkable 11-15 centuries old. Either way, the building has been enhanced over the years. The golden roof has been replenished by devotees, including the 15th-century Queen Shin Sawbu (BinnyaThau), who donated her bodyweight in gold.

The aerial view illustrates the pagoda’s ‘constellation.’ The pavilions, shrines, and bells are arranged according to Hindu cosmology. The gold structures surrounding the pagoda are stupas, and the four bigger monuments to the south (top), west, north, and east are statues of historical Buddhas. Between these are ‘cosmic pillars’ showing planetary positions in the zodiac.

The view from the top

Maybe we don’t give architects enough credit. On top of creating buildings that look stunning from ground level and spaces to live and work inside, it seems they cater to the aesthetic pleasure of the birds, too.

Seeing familiar buildings like these from the sky reveals how they function both architecturally and within their surroundings. Next time you wander past your own local landmarks, don’t forget to peer up and wonder how they must look from above.

The past, present and future of 7 cities in one photo