Going anywhere nice this year? Well… how about in the year 2046?

Vacation is a utopian prospect. Whether you want excitement or relaxation, a familiar resort, or an adventure into the unknown, tourism experiences are designed to cater to your dreams – within the realms of possibility.

But what if you could take a trip through time, beyond the realms of possibility?

We’ve gathered six inspiring concepts of how tourism might look in the future – according to the visionaries of the past. Scroll on to see how these retro-futuristic vacations look when recreated with the latest imaging techniques. 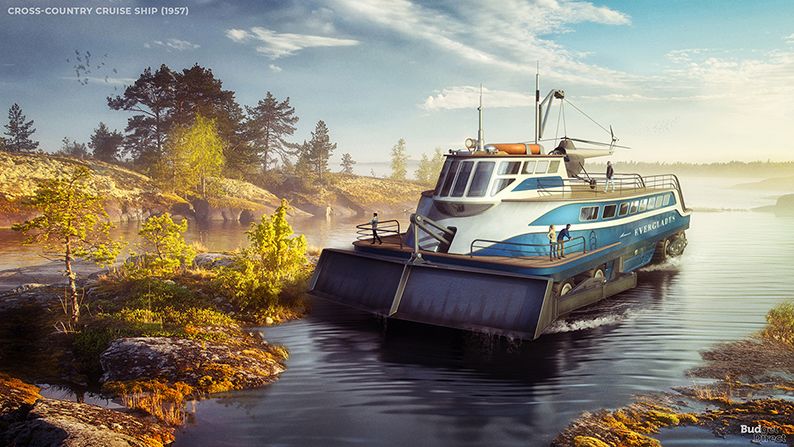 Don’t like the idea of being stuck on a boat at sea for weeks on end? Try a cross-country cruise! The cross-country cruise ship has soft “sausage-like” airbag tyres that can handle any terrain. And those weight-spreading wheels have an unexpected benefit if you’re unlucky enough to get run down: “servicemen and women who have tried it say it’s like a nice, beefy massage.”

This “crazy, mixed-up amphibious train” was invented by legendary pulp and sci-fi illustrator Frank Tinsley for Mechanix Illustrated magazine in 1957. But the “saggy bladder” wheel technology is based on William H. Albee’s real-life patented ‘Rolligon’ tyres. Albee had witnessed Eskimos carrying tons of meat across land on swollen sealskins, and he built a business offering similar solutions to industrial, military, and agricultural customers. Sadly, the tourism industry will have to wait. 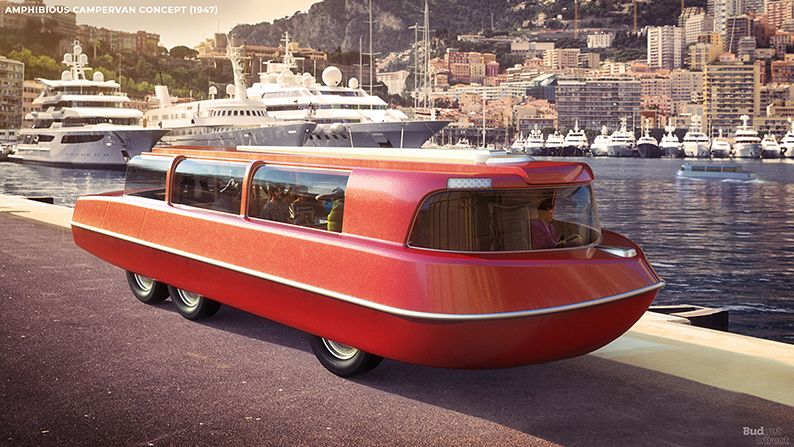 The industrial designer Robert Zeidman invented this “civilian amphibian” after seeing experimental vehicles emerging from the sea during World War 2. This luxury 34-foot campervan features a built-in bar, space for marine equipment, and a convertible lounge compartment that opens up at the sides to become a fishing cockpit. There is also room in the driving compartment to create a bunk for your chauffeur-pilot if you’d prefer to spend your journey watching the built-in TV rather than driving.

Look at the outside of the ‘Vacationer,’ and it’s clear Zeidman was a veteran of the military rather than, say, Chevrolet. But experienced yacht builders advised him on the interior, which is a model of post-war domestic convenience. It features cutting-edge lighting solutions and seats that conceal special heaters for keeping meals hot. 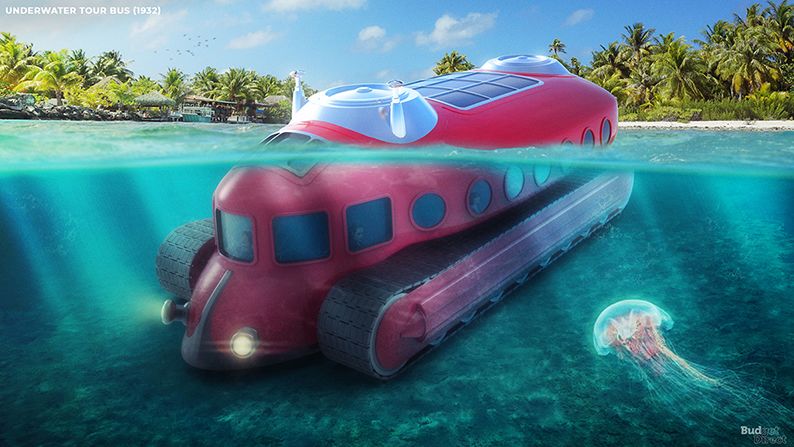 “Ocean marvels seen from underwater bus!” The Underwater Tour Bus rolls on tractor treads beneath the surface of shallow waters. But the claustrophobic tourist needn’t worry about getting trapped. The passenger compartment can be instantly released from the undercarriage to float to safety in case of breakdown.

The inventor was an engineer from Nice in the south of France who believed sightseeing trips like this were the way forward. He also developed an underwater railroad for cable-drawn carriages. And the all-important matter of oxygen? By bus or by rail, your air will be funnelled to you through telescoping pipes that reach above the waves. 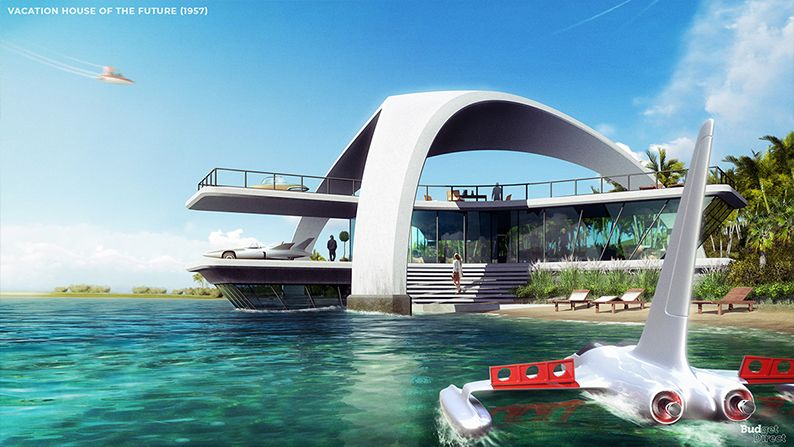 James R. Powers’ vision of a luxury ocean-side home is walled with glass and protected from the sun by an imposing concrete canopy. It features an underwater observation deck and a combination dining balcony/helipad. If built in the near future, all that glass would probably be coated with thin-film solar skin to energise the whole complex.

Celebrated designer Powers drew the house as a backdrop to his ideas about the vehicles we’d drive to get there (mostly of the ‘airphibious’ variety – designed for land and air). Powers worked at Ford’s Advanced Styling Studio and was encouraged to imagine future vehicles unhindered by the conventions of the day. Rather than dream up fancy cars in isolation, the studio’s designers made sketches or clay models that imagined the future roads where they’d be driven – and the holiday homes where they would be parked (or landed). 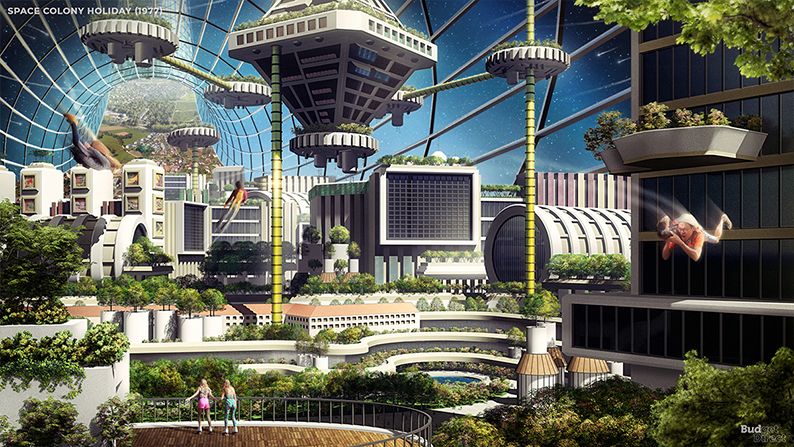 In the late 1970s, NASA was sure that colonization of the stars would be the next big thing, and the space agency commissioned artist Rick Guidice to illustrate their reports on large-scale space habitats. Guidice’s background in advertising led to truly inspirational illustrations of how we might live.

Space colonies would be used for off-world mining and the zero-gravity manufacturing of giant spacecraft. But all those blue-collar workers would need somewhere to live – and play. Guidice’s leisure-oriented city is lined with greenery just about anywhere you could fit a garden. Ponds, floating buildings, and enormous glass domes add to the sense of airiness and relaxation. And what future would be complete without jetpacks?

We live in troubled times, and many of us have trouble imagining when or how we might be able to get away from it all for a bit. Just like a vacation, dreaming about bright futures is a fabulous way to escape the confines of the present. What kind of vacation would you take if your only limit was your imagination?

We started by gathering interesting retro futurism images – images created by visionaries, artists, and inventors depicting what they thought things in the future might look like. We then researched each image further: who created it, where it was originally published and when, as well as any interesting facts or important features. Finally, we created new, realistic renders based on the original drawings.

(2018). 55 Depictions Of How People In The Past Envisioned Life Now. allthatsinteresting.com

Vacation House of the Future. vintagraph.com