There are lots of comforts that many of us would happily sacrifice for a cheaper plane ticket. Leave your luggage at home? Sure! Standing room only? Consider it money saved for beer and souvenirs!

But there is one detail where no passenger is prepared to compromise: the comfort of your pet.

We checked out the pet-friendly policies of the top 50 airlines in the world (as voted for by customers). We rated them out of 10 in categories such as cost-per-pet, cabin allowance, and openness to welcoming ‘unusual’ animals. Each airline ended up with a score out of 100, and we used these scores to rank the top 50 pet-friendly airlines on Earth.

Read on to see the winners!

Which airlines are best for travelling with a pet?

You can see plenty of puppies riding in bicycle baskets around the streets of the Netherlands, and it turns out Dutch pets like to travel by air, too. KLM Royal Dutch Airlines is paws-down the winner for pets on planes, with a score of 81.8/100. That’s nearly 5 points ahead of second-ranked Air France. A look at the chart shows that KLM scores strongly across all categories, while third-placed Air Canada scores high for their low travel fees (just $82 per pet) but falls behind with its limit of 45kg for pets who fly in the hold.

Where are the most pet-friendly airlines based?

The best airlines for pet travel are based across just three continents. Europe is a hub for jet-setting pets, with five out of the top ten pet-friendly airlines, plus Turkish Airlines and Russian Aeroflot in countries that straddle European-Asian borders. South Korea has two airlines in the top ten, and Air Canada is the only representative of North America. 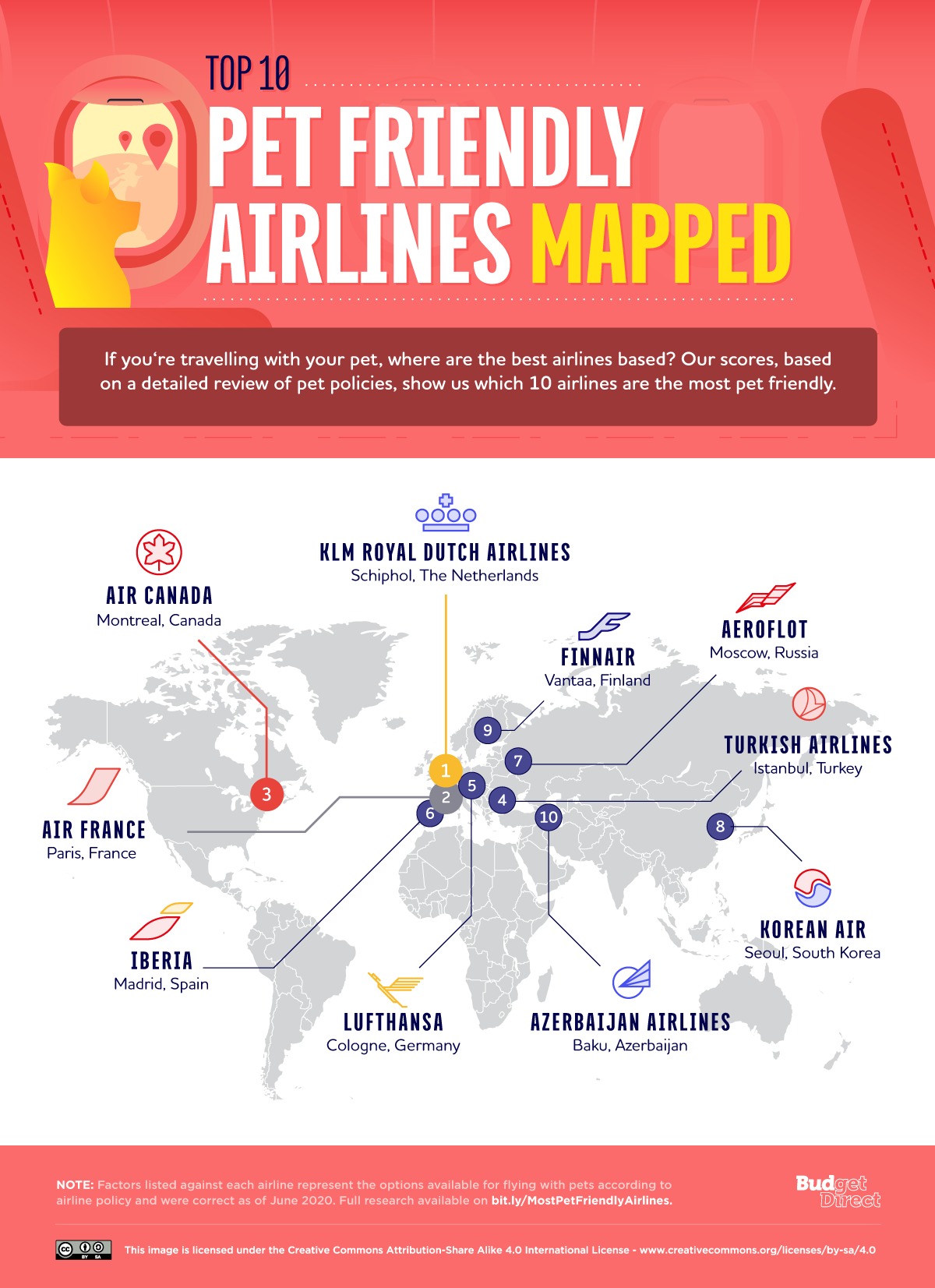 Who are the top and bottom-ranked airlines for pets on planes?

The airlines we reviewed were already highly rated for humans, so the high pet-friendliness scores of airlines like KLM and Lufthansa prove they have cross-species appeal! However, the airlines at the bottom of our pet-friendly chart seem to think much more highly of humans than of cats and dogs. Australia’s Jetstar Airways is in bottom place with a big fluffy zero because the airline “is not equipped to transport your pets” (although they’re kind enough to recommend ‘pet travel experts’ Jetpets to sort it out for you). 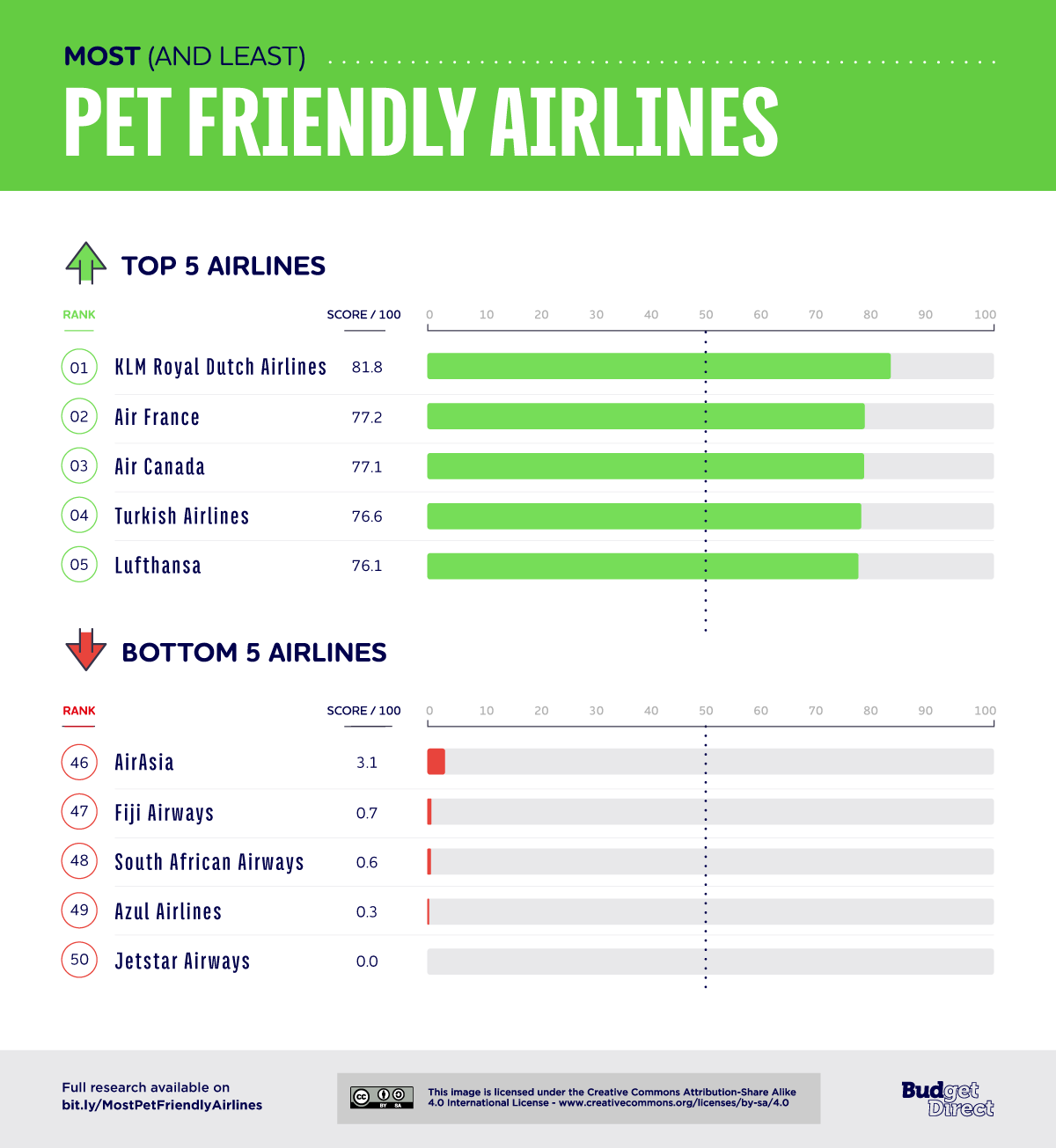 Pet-friendly airlines are the ‘bring your dog to work’ employers of the leisure industry. If one of these airlines is travelling in your direction, why not check in next time you want to travel with four-legged company; you’ll know your dog, cat, or emotional support alligator will be well looked after.

To create these charts, we conducted a detailed review of the pet policies of the top 50 airlines in the world, as ranked by the annual Skytraxx airline rankings in 2019. The information on the pet policies were sourced from the airlines’ official websites, and we used websites such as BringFido and Pet Travel to find additional information. We then scored and ranked each airline based on their policies.

Research was conducted between March 20th and April 1st, 2020. The full research behind this project can be found at bit.ly/MostPetFriendlyAirlines.

If 6 abandoned homes were renovated for the 21st century