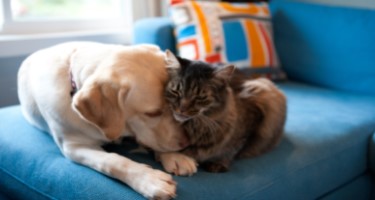 Find out the common costs of acquiring a pet, and keeping them healthy in Budget Direct’s latest survey into Australian pet ownership.

Fur families can be worth their weight in gold, for all the joy, companionship and laughter they bring. But from acquiring a pet to keeping it happy and healthy, how much do they really cost us?

We’ve surveyed 999 Australians through Pure Profile (weighted to represent all Australians who own cats and dogs), and collected data from Budget Direct’s Pet Insurance team to bring you:

Data compiled from Pet Secure and Canstar show that adoption and rescue shelters are by far the cheaper ways to acquire a pet. However, depending on the breed, availability, demand and appearance, pets from breeders can cost anywhere from $500 to several thousand.

‘Adoption’ typically refers to going through bespoke adoption services and agencies, whereas separate shelters can allow visitors to come and adopt an animal. Both processes involve rescuing an animal, and are therefore quite similar.

Data compiled from the Pet Insurance team at Budget Direct show that seemingly common, everyday occurrences can incur major costs. With no public health systems in place for pet (like there is Medicare for humans in Australia), owners are faced with the choice of paying these fees out of pocket, or looking to recover costs from their private pet insurance policy.

Throughout our survey results, options of viewing data by “age” or “gender” refer to the age and gender of the survey participant, not their particular pet/s.

3.1 Which of the following do you have?*

*Only dog and cat owners were surveyed in this study, therefore figures and percentages only represent Australian pet owners. Given users were able to select multiple options, values may not add to 100%.

73% of pet owners surveyed have dogs, whereas only 51% of pet owners indicated they have a cat. Interestingly, almost 50% of cat owners also have a dog, whereas only a third of cat owners also have a dog. This might suggest that those with cats will seek out dogs that are compatible, whereas some owners of dogs that aren’t compatible with cats simply can’t add them to their household.

While males and females responded as having the same rates of dog ownership, females were slightly more likely to own a cat.

3.2 How did you acquire your oldest/only pet?

By a cat’s whiskers, Australians responded as slightly preferring shelters as their means of getting a pet. However, dog owners tend to greatly prefer going through a breeder, with almost half of dog owners indicating their oldest pet came from a breeder. Almost 60% of cat owners, however, responded as acquiring their pet through either a shelter, or adoption program.

Females tend to be more likely to be gifted a pet than males, whereas males were more likely than females to get their pet from a breeder.

Over 70% of Australian respondents’ oldest/only pets are aged above 4, and over 28% were above 10. Those who went through a breeder, though were far less likely to respond as having an oldest/only pet above 10. This could be due to some breeder-acquired pets being bought young, but put up for adoption or sheltered before they reach 10 years of age. This would also give more opportunity for adoption/shelter-acquired pets to reach older ages.

There was no noticeable difference in ages between cat and dog owners. However, Australian respondents aged above 65 were far less more to have mature pets. Almost 94% of respondents over 65 had oldest/only pets aged above 4, compared to less than 70% of those aged 18-34.

3.4 What do you spend the most money on for your oldest/only pet?

Almost 15% of respondents aged 18-24 also suggested they spend more on toys, grooming or clothing than they would food, vet bills or medications.

3.5 What has been your highest vet bill to date? (prior to any pet insurance reimbursement)

Over 1 in 4 Australian pet owners surveyed have had a vet bill come to over $1,000 (not including pet insurance reimbursements), and nearly 4% have had bills over $5,000.

There was no noticeable difference in anticipated highest vet bills, depending on whether the participant went through a breeder, shelter, or adoption agency to acquire their pet. However, pets received as gifts tended to have far higher rates of having no vet bills, or lower rates of vet bills up to $15,000.

Dog owners and cat owners also surveyed as having similar rates on vet bills, with roughly 4% of each having experienced vet bills of over $5,000.

The figures shown do not include those who chose to not seek veterinary treatment for their pet.

**Only participants who mentioned in question 3.5 that they had previously had a vet bill were asked this question.

It’s important to note that these results come from surveyed Australians across a range of insurers. Different insurers have different exclusions, terms and limits on their Pet Insurance.

For example, most insurers completely omit any pre-existing conditions from their cover. However, if you can prove with the right documentation and veterinary notes that your pet’s pre-existing condition has been fully cured for 12 months, it may still be covered by Budget Direct Pet Insurance.

Of course, this is just a summary of the feature – for all the terms, conditions and details, please read the Product Disclosure Statement.

3.7 Would you be prepared to spend $10,000 to keep your oldest/only pet alive if they became sick?

Around 50% of respondents suggested they would pay $10,000 to save their oldest/only pet, with 50% suggesting they wouldn’t.

Owners of pets from breeders were also surveyed as more willing to part with $10,000 than lose their only/oldest pet. However, owners of pets from shelters, adoption agencies or a gift were more likely to not pay $10,000.

***Only respondents who answered in question 3.6 that they don’t have Pet Insurance were asked this question.

Most Australians who responded as having pets, but not having pet insurance cited their main reason as being the price – with 66% of those surveyed feeling it’s too expensive. Coincidentally, the younger the respondent, the more likely they seemed to be to feel pet insurance was too expensive. This seems to vary significantly from the results of 3.8, where younger Australian respondents suggested they’d be more willing to pay $10,000 to save their pet.

Can you afford to not have Pet Insurance?

With Budget Direct Pet Insurance, you’d not only have the added security of cover for a variety of accidental illnesses or injuries. You’ll also have the added benefits of:

Check out Budget Direct’s Pet Insurance Calculator to see just how much you could save on vet expenses for common pet ailments.

Disclaimer: This survey was conducted by Pure Profile on behalf of Budget Direct in October 2021. The survey was conducted online with a total sample size of 999, weighted and representative of all Australian adults (aged 18+) with cats and dogs. All other data on this page is the latest available from the named sources in the references above, and was obtained in October 2021. Auto & General Services Pty Ltd does not guarantee the accuracy or completeness of the data and accepts no liability whatsoever arising from or connected in any way to the use or reliance upon this data.