Is there any device that interior designers value more than the humble pin?

Not the real pin – the tiny, real-world tool used to hold fabric together. What designers covet the most is the virtual pin: getting their work ‘pinned’ on Pinterest, the internet’s mood board.

Getting your design shared on Pinterest shows that you have influence. And it grows your influence, as the pinned image spreads from board to board, bookmarked by design fans in search of inspiration for their next home decorating project.

If you’re looking for fresh ideas for your interior, Pinterest is a rabbit hole of possibility. In fact, without a map, it can all be a bit much. So, Budget Direct crunched the numbers to find which interior designers have the most influence on Pinterest – and which trends you should search right now to bring your home décor bang-bang-bang up-to-date.

The most popular interiors guru on Pinterest is a household name in the US. Joanna Gaines is one-half of the wife and husband team who became reality TV home renovators as the stars of Fixer Upper. The show itself was a big influence and is credited with the boom in farmhouse chic throughout America’s interiors.

American designers dominate Pinterest’s interiors scene. But we found a lot of European designers with five-figure pin counts, too. Belgium’s Axel Vervoordt is the only non-American in the top 10. Like Gaines, Vervoordt’s practice is founded on renovating without losing the charm of a dated interior. “I always was against restoring furniture,” says Vervoordt. “I think a piece with a base patina is contemporary art. It just took 200 years to look like that.”

Our next graphic illustrates the ten most popular design themes on Pinterest. Vintage comes out on top by a long way. Of course, there are heaps of vintage images available to pin because the theme stretches back through history. But vintage arrangements also become Pinterest hits because a good find has its own story and character. The trick is to balance vintage pieces with each other – and Pinterest has plenty of examples of how to do just that. 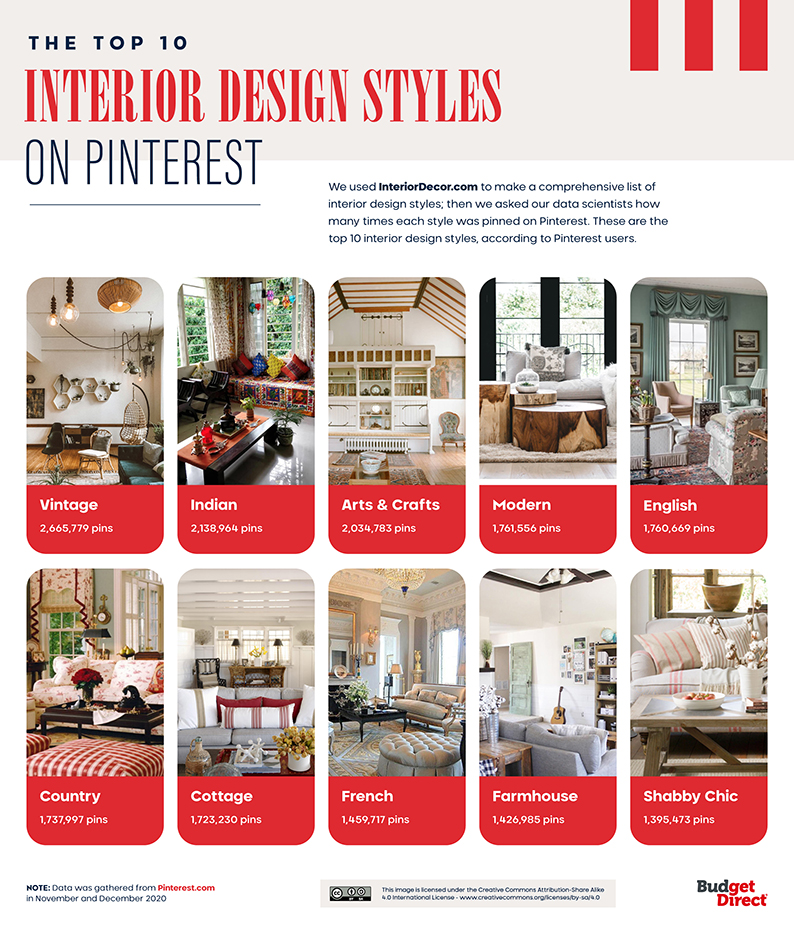 Indian-style interiors are a feast for the eyes. Generous use of colour, ornate wood furniture, bare spaces filled with knick-knacks, and of course the Indian use of pattern make this collection of styles a hit on Pinterest and in homes. And it doesn’t have to look old-fashioned.

We’ve seen that America’s fixer-upper, Joanna Gaines, is the most influential ‘Pinterior designer’ in the US and the world. Not too far behind her is Thomas O’Brien, whose Aero design studio and shop operate symbiotically in New York City. O’Brien is credited with taking the cold edge off of modernist design, being unafraid to add vintage touches or dabble in other interior styles.

But while Gaines and O’Brien may breathe life into American design, they look positively conservative next to others in the chart. The late Tony Duquette exhibited at the Louvre, designed sets for the movies, and decorated the homes of Elizabeth Arden and billionaires including J. Paul Getty and David O. Selznick. His company still provides “deluxe interiors of rarefied refinement” from Beverly Hills to Paris to Saudi Arabia.

The most Pinfluential British interior designer is Zaha Hadid. The Iraqi-born “Queen of the curve” re-drew the design rulebook, creating bold and futuristic interiors and buildings on a huge scale.

A glance down the ‘runners-up’ illustrates how British design is still revered both for its imperial-era classicism and the chintzy tearoom charm exemplified by Nina Campbell. “Act out sitting, reading and entertaining in the house,” advises Campbell. “Problems such as a dingy corner or a poorly placed towel rail will immediately become clear.”

The top Australian interior designers demonstrate a passion for extravagance that’s never afraid to ask for more. This feel is personified by number one, Greg Natale, who puts an avant-garde spin on Australian maximalist design. Natale describes his own home as “contemporary and tailored with monochromes featuring strongly, highlighted by pops of pink and metallics… I also can’t live without art on walls.”

Meanwhile, Melbourne’s Fiona Lynch brings a fine art background and a touch for texture to her otherworldly interiors. One of Lynch’s recent textural mood boards is described thus: “An olive velvet curtain adds minted drama, while concrete columns etched with graffiti provide a gritty urban edge.” If Pinterest lacks one thing, it’s the ability to reach out and touch the designs!

With millions of pins to explore, ‘interior design Pinterest’ is a handsome place to get lost for a while. But once you gather a few pins of your own from out in the wild, you’ll soon start to see a pattern take shape. Drawing influence from many top designers and Pinterest curators can help you find the look that is unique to you and your home.

How did we gather our data?