Television unites a nation – or at least it did when there was just a handful of channels from which to choose. But have film and TV streaming really atomized our national viewing habits? Or are audiences around the world now unified by their favourite Netflix Originals?

We used Google data to identify the most-searched Netflix-produced titles in every country over the past 12 months. Drawing our list of Netflix Originals from the Flixable online database, we divided our findings according to Flixable’s genre categories. This gave us the most popular overall Netflix Original TV show and Netflix movie in every country, as well as the top picks across the most common genres.

And like good TV geeks, we used the results to create a series of new maps, illustrating the overall most popular Netflix Originals and genre titles around the world. 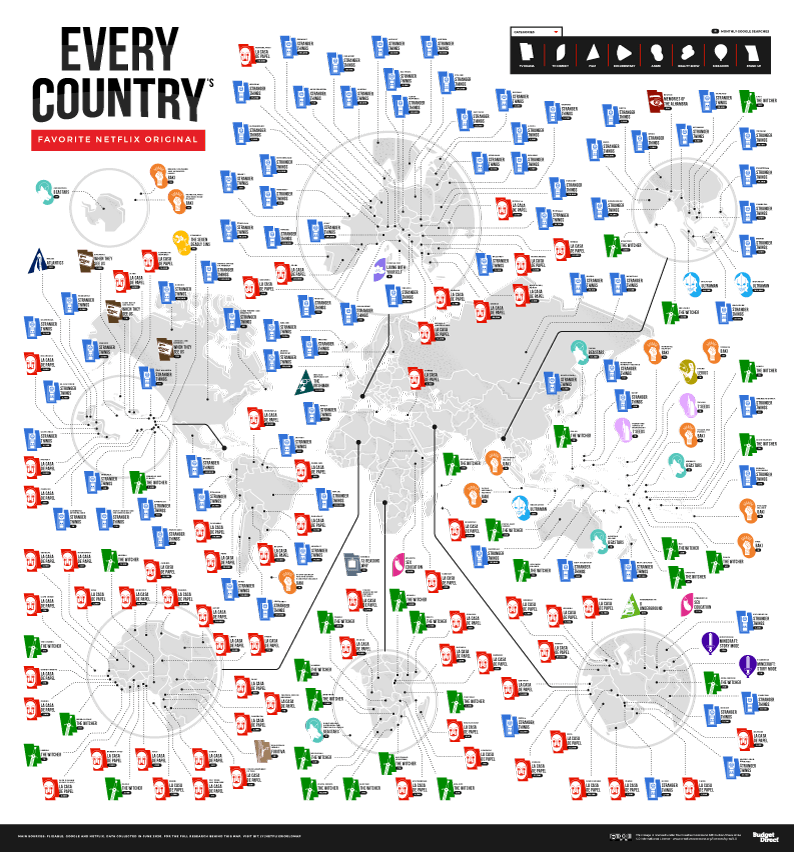 North Americans mostly search for two outstanding Netflix Original series. Stranger Things is the favourite Netflix Original of the States and Mexico among other territories. The third season got the lowest ratings yet from viewers, but 18m American households watched the whole thing in its opening weekend. The other hit series is La Casa de Papel, aka Money Heist, most popular in five North American countries.

Honourable mention goes to When They See Us, the most-searched Netflix Original in Antigua and Barbuda, Saint Kitts and Nevis, and the Bahamas. Ava DuVernay’s show is based on the true story of five Harlem teens falsely accused of an assault on a Central Park jogger.

Only two European territories have a favourite Netflix Original that is neither Stranger Things nor La Casa de Papel. One is Vatican City, where the top show is Living with Yourself. Paul Rudd stars as a copywriter who checks in for a futuristic spa treatment only to be replaced by a ‘better’ clone of himself. It has been searched just 10 times from the Pope’s neighbourhood. 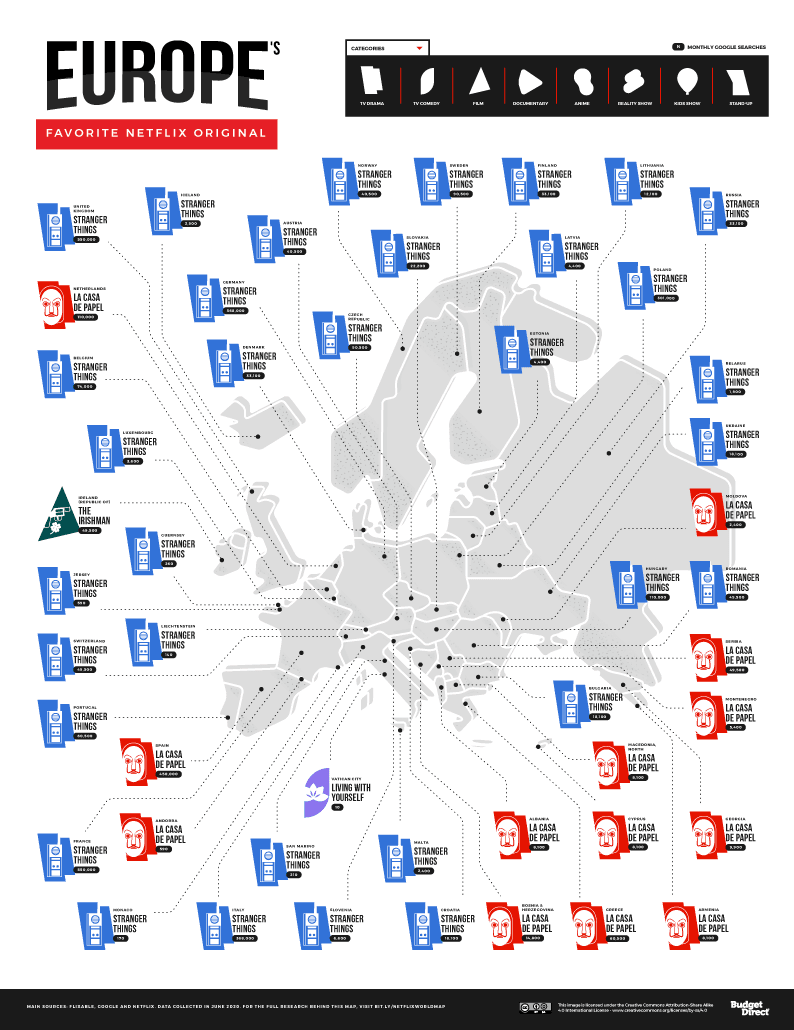 The Irishman is the favourite Netflix Original of… Ireland, with 49,500 searches. The film’s director, Martin Scorsese, has often spoken out against the home viewing experience. “I’m concerned about pictures being suggested by algorithms,” says Scorsese. “The usual end result of that—and it’s happened to me—is pretty much binge-watching.”

Every country in South America claims either Stranger Things or La Casa de Papel for its favourite. Netflix acquired La Casa following its run on Spanish terrestrial TV 2017, commissioning extra episodes with higher budgets. The Tarantino-esque series follows a gang that breaks into the Spanish mint to print billions of euros to steal. 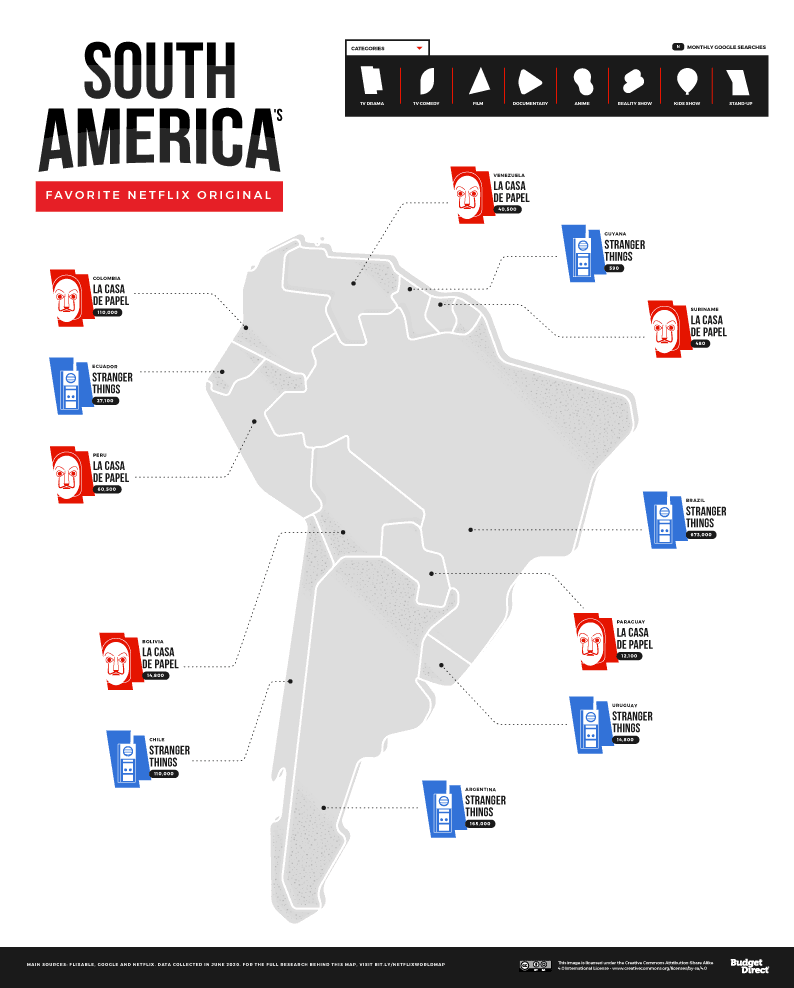 Stranger Things boasts 673,000 searches in Brazil. The young cast of the Goonies-inspired science-fiction horror show are megastars in Brazil and have a huge following on Instagram. “What do I do with my enchanted heart with this adorable human?” asked one follower after Millie Bobby Brown recorded a special message for her Brazilian fans.

The most searched Netflix Original in both Kyrgyzstan and Tajikistan is Minecraft: Story Mode. This “five-episode interactive narrative series” is based on the sandbox video game of the same name. Viewers ‘play’ the show by making choices for the characters as they watch, creating their own version of the series. 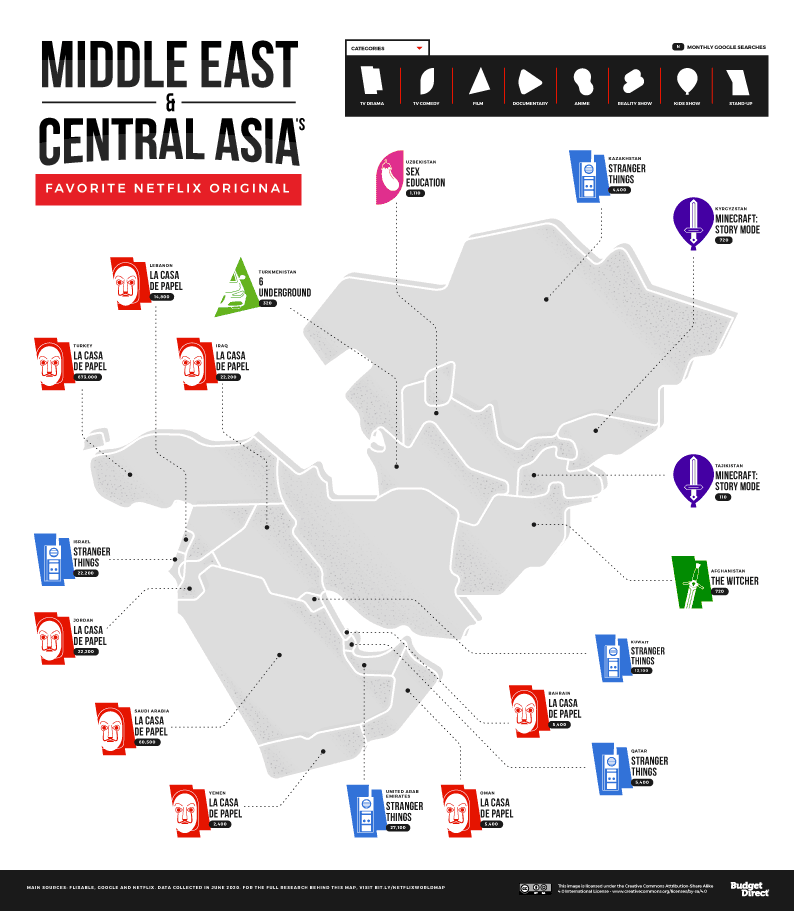 Sex Education is big in Uzbekistan, where actual sex education is not provided in schools despite high teenage sexual activity and pregnancy rates. The British comedy stars Gillian Anderson as a sex therapist and Asa Butterfield as her teenage son, who sets up an alternative sex advice business with a classmate.

Stranger Things is the most widespread hit in this region. It is the most-searched Netflix Original in Australia (165,000 searches) and India (368,000) among others. The manga sequel Ultraman is big in Indonesia (368,000) and Malaysia (40,500). The original show was a hit tokusatsu (effects-laden live-action production) in Japan in the 1960s. 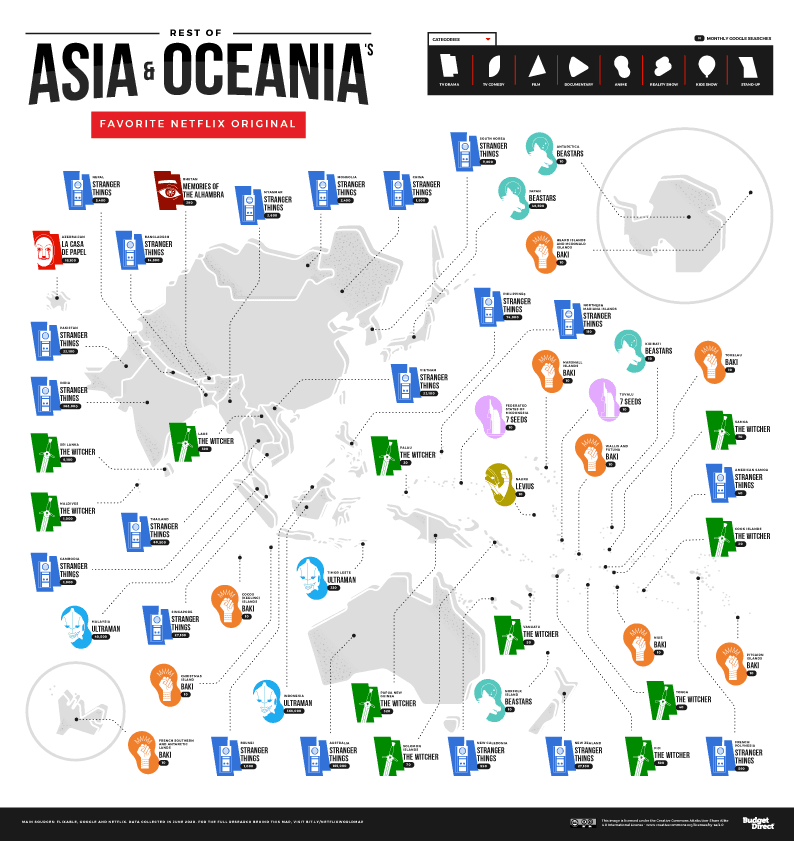 The Witcher is the top Original in nine territories, including Fiji and Sri Lanka. This adaptation of a series of Polish fantasy novels was first going to be a single feature film until Netflix suggested splitting it into a serial. Wonder how many times Game of Thrones came up in that conversation?!

Africans aren’t quite as smitten with the retro-Hollywood antics of Stranger Things. Instead, La Casa De Papel is the favourite Netflix Original in 32 of the 54 African countries for which we could find data, including Egypt (110,000 searches), Morocco (60,500), and Algeria (49,500). The Witcher is the clear second-place favourite across the continent, with 40,500 searches in South Africa, for example.

Equatorial Guinea has its own favourite: Fugitiva. It’s another Spanish crossover hit. Paz Vega stars as a domestic abuse survivor who fakes a kidnapping to escape her husband’s vengeful enemies.

Every country’s most popular Netflix Original by genre

Our final series of maps illustrates the most-searched genre titles in every country. Click to flick from genre to genre. Some shows dominate their genre across the world. For instance, The Seven Deadly Sins is the most searched anime in 127 countries. The fantasy is based on a Japanese manga series about the Holy Knights of medieval Britain.

The international appeal of Netflix Originals

Netflix Originals such as Tiger King, Stranger Things, and Money Heist have provided the thrills while much of the world has stayed home to stay safe over recent months. The movie and TV streaming giant may use algorithms to maximize viewership, but clearly Netflix’s creatives have a sense of what people want to see. With few exceptions, audiences in nearly every country of the world are looking for the same irresistible shows. Which international hits haven’t yet shown up on your radar?

We collated our list of Netflix originals from Flixable and included feature films and TV series produced by Netflix and/or deemed to be Netflix Originals. Genres for each title were derived from their categorisation on Flixable. For the top documentary and stand-up categories, we included both TV series and full-length features/performances.

Search totals were gathered using Google Keyword Planner. The figures represented the monthly average based on the last 12 months. We gathered search totals both for titles alone (e.g. “stranger things”) and titles with “netflix” appended to a keyword (“stranger things netflix”) to counteract the skew in figures for generic terms such as “love”, “ibiza”, “easy”, etc. To determine the most-searched film or tv series in a given country, adjusted search totals were used. For each genre category, the TV series or film with the highest adjusted search total in a given country was deemed the most-searched in that country.