Australian architecture, at its best, is designed to cater to the local way of life and to withstand the unforgiving climate. While the nation’s buildings are famous for their iconic, no-nonsense exteriors, it is essential for the interiors to be appealing and highly functional, too. After all, you can’t spend every day outdoors.

But not everyone gets a chance to see inside some of those most celebrated buildings. Even online, cross-sections of Australian architecture are few and far between. We decided to fill that gap with seven brand-new cutaway images of Australia’s most astonishing structures.

Jørn Utzon’s “array of concrete shells” is one of the most recognizable buildings in the world – from the outside. But what lurks beneath those shells? Most notably, a skeleton of concrete beams (up to 49-metres long) support that tremendous roof – an ingenious way to prevent the need for imposing interior columns. The beams were a late addition made as an engineering solution but were considered important enough to be integrated as a key aesthetic element in some of the building’s 1,000 rooms. 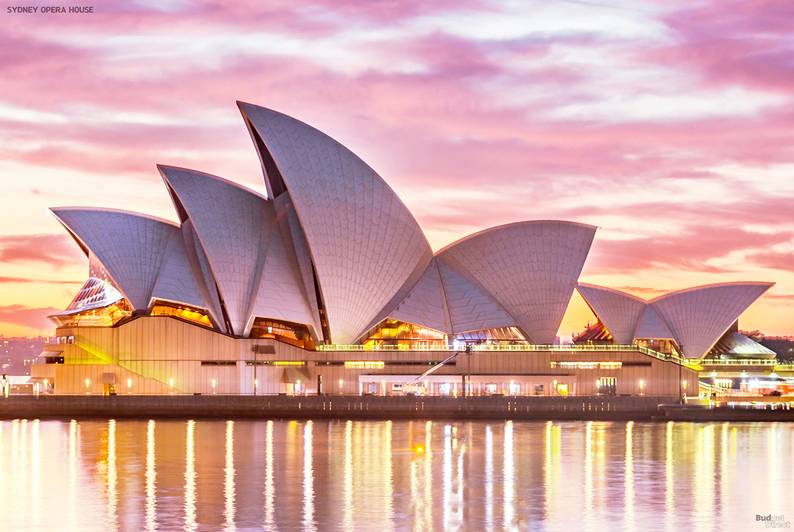 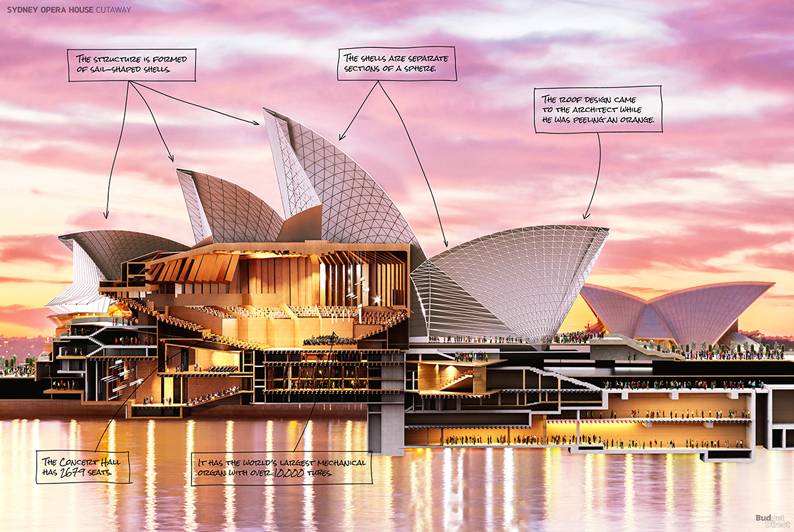 The temperature in the Concert Hall has to be kept at precisely 22.5 degrees to keep the instruments in tune. Cold seawater from the harbour circulates through 35 kilometres of pipes to power the building’s air conditioning and heating.

Australia’s first city rail station launched Australia’s first steam train journey on September 12th, 1854. The famous station building was completed in 1909, following an architectural competition that was won by James Fawcett and H. P. C. Ashworth. For a while, in the 1920s it was the busiest station in the world. Today, its French Renaissance-style façade, domes, and proudly arched portal make it a true cultural emblem of Melbourne. 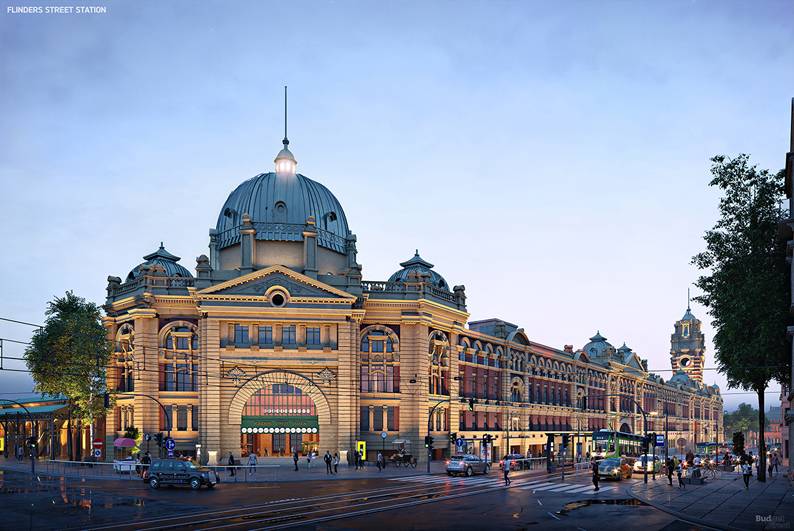 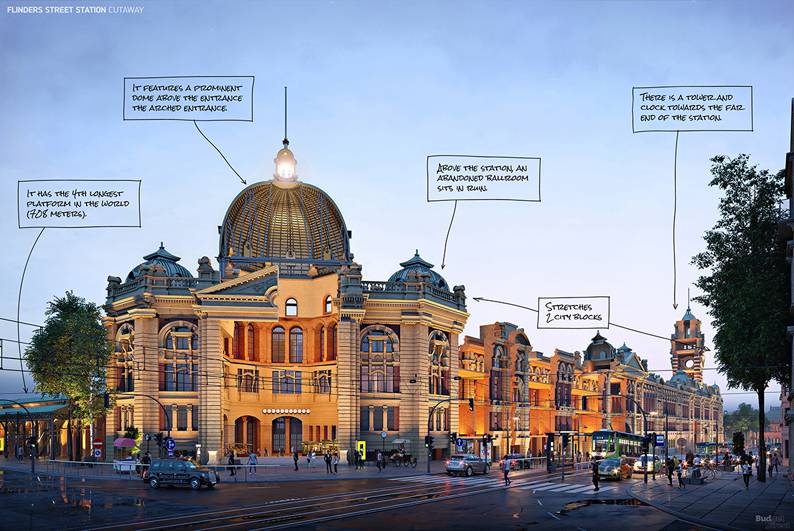 The expansive interiors have served several unexpected purposes. Perhaps most famously, there is an abandoned ballroom on the third floor. It started as a Victorian Railways Institute lecture hall. At that time, the building also housed a lending library, billiards room, and private gym with a boxing ring, all for the betterment of railway employees. There was even a 440-yard running track on the roof. The smaller domes have been the site of a Camera Club and a Radio Room over the years. roups like the Australian Railway Historical Society and the Melbourne Roller Canary Society used to meet in obscure rooms in the roof, reachable only by a narrow staircase.

Australia’s parliament building is a perfect 300m x 300m square. At its busiest moments, up to 5,000 people work in Parliament House’s 4,500 rooms, across more than 250,000m2 of floor space. Two curved, 460-metre-long walls separate the interior into four main zones. The House of Representatives chamber is on the east side, and the Senate chamber on the west, each with their associate offices. Additionally, a central zone provides space for ceremonial use and public access, while the south end houses the executive government wing. 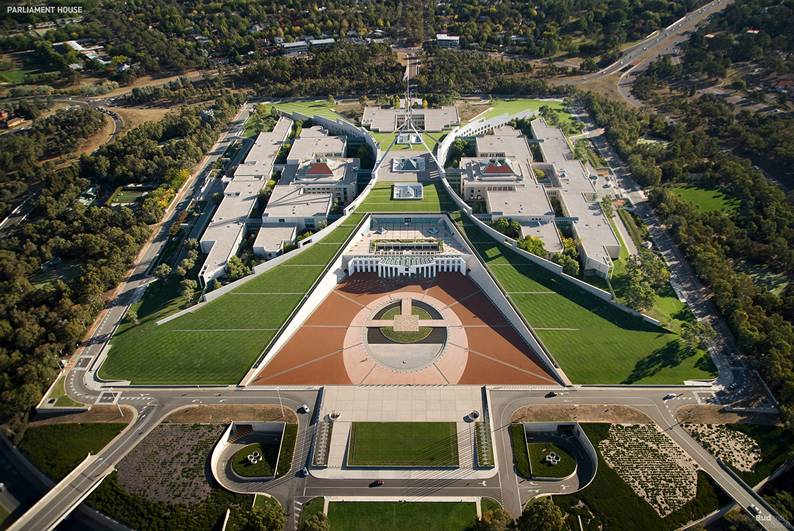 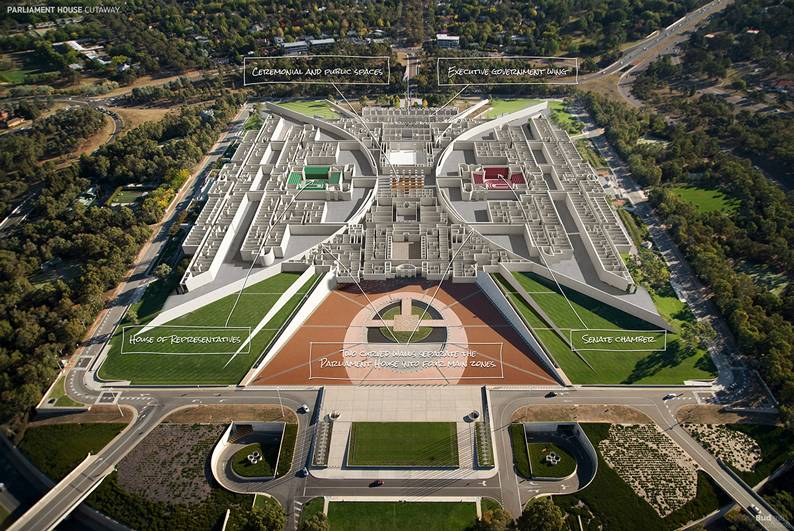 This high level of organization continues through the colour scheme. As with the British Parliament, the Senate chamber is red, and the House of Representatives is green. The particular shades used were chosen to evoke the familiar colours of iconic Australian native plants. “There must be a slow and deliberate fusion of the spaces, materials and surfaces into an environment in which all elements read together in a rich and mutually descriptive way,” said architect Romaldo Giurgola during construction.

Cape Byron Lighthouse was built on the site of a ‘dancing circle’ belonging to the Arakwal Bumberlin Aboriginal tribe in 1901. It is just 22 metres high because it is already situated 94 metres above sea level. Inside, a concrete spiral staircase leads up to the cylindrical tower, which is built from precast concrete blocks. 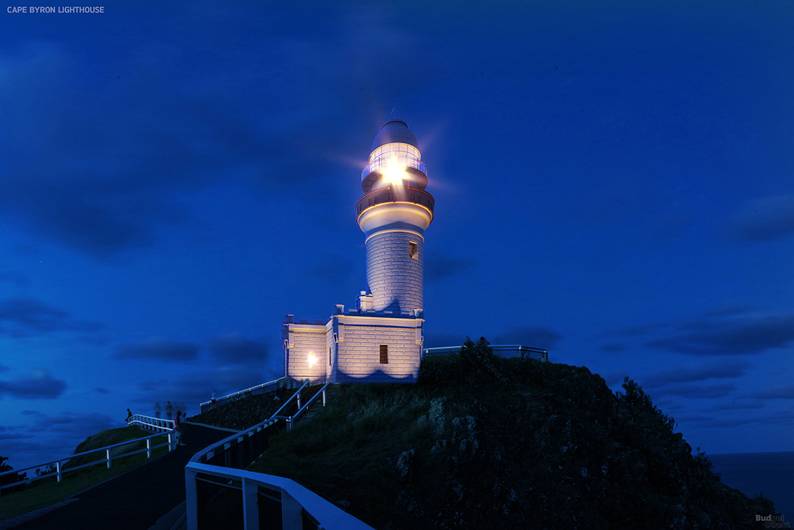 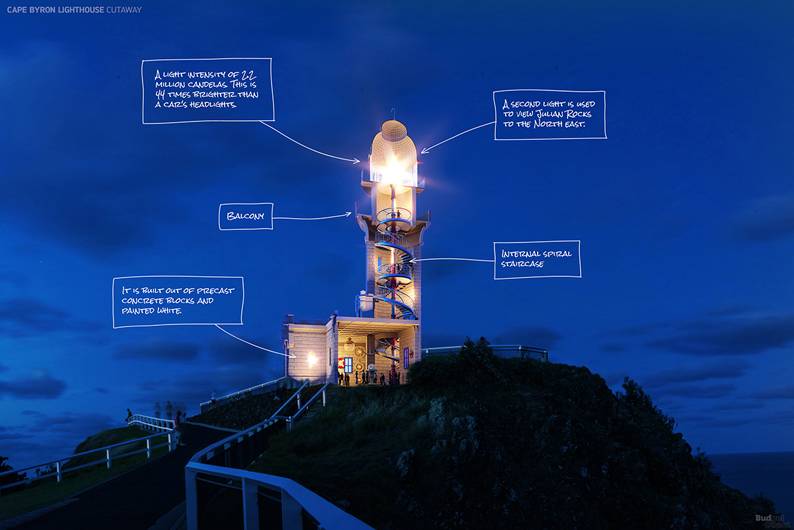 Lighthouse enthusiasts take note: the original six-wick kerosene burner has been upgraded to an eight-ton dioptric first-order bivalve double-flashing lens containing 760 pieces of polished prismatic glass built by the French Societe des Establishment. Today, the light system is automated, and it is possible to stay overnight in one of the Victorian Georgian style cottages where the lighthouse keepers used to live.

The new City of Perth Library was designed by Kerry Hill Architects and completed in 2016. Its circular design is both elegant and democratic in approach. The building’s tilted shape and intermittent vertical stone cladding were designed to maximize natural light. The shape also makes more space and light for nearby historical buildings that were overshadowed by the building that previously occupied the site. 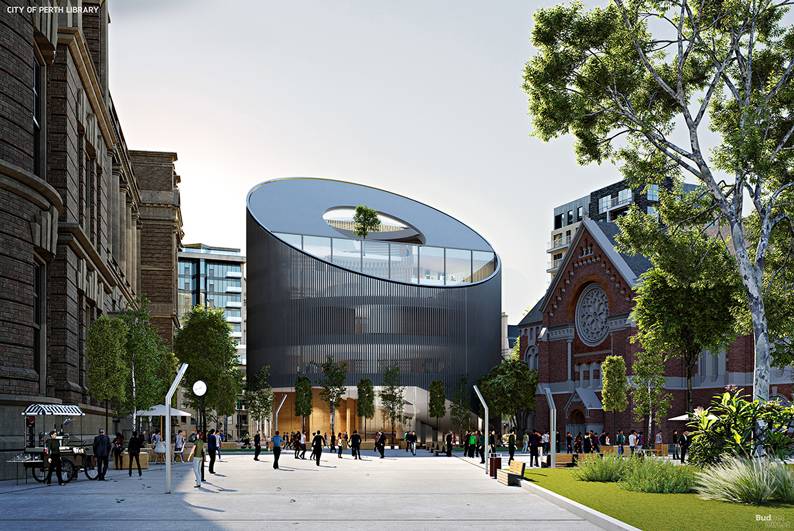 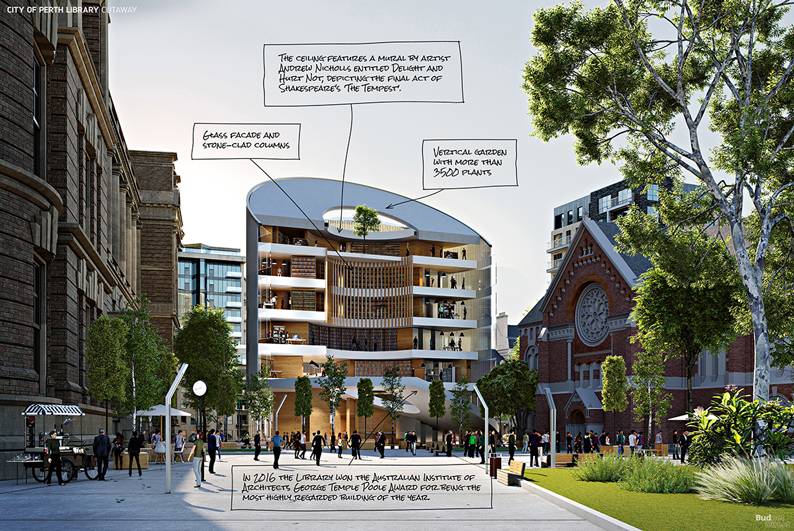 A curved staircase wraps around the seven floors. At the building’s core is a three-storey-high ‘void’ that adds a sense of space and grandeur. A mural inspired by Shakespeare’s The Tempest adorns the ceiling, and a 13-metre vertical garden brings the space to life with more than 3,000 plants.

“The most iconic building on the Gold Coast” was the world’s tallest residential building for the first six years of its existence, at 322.5-metre (1,058 ft) tall. Peel away the exterior, and you’ll find 1331 steps leading from the ground floor to Level 77 (and an express lift that makes the same journey in 2.7 seconds). Once there, the SkyPoint bar offers 360-degree observation-deck views over the Gold Coast. 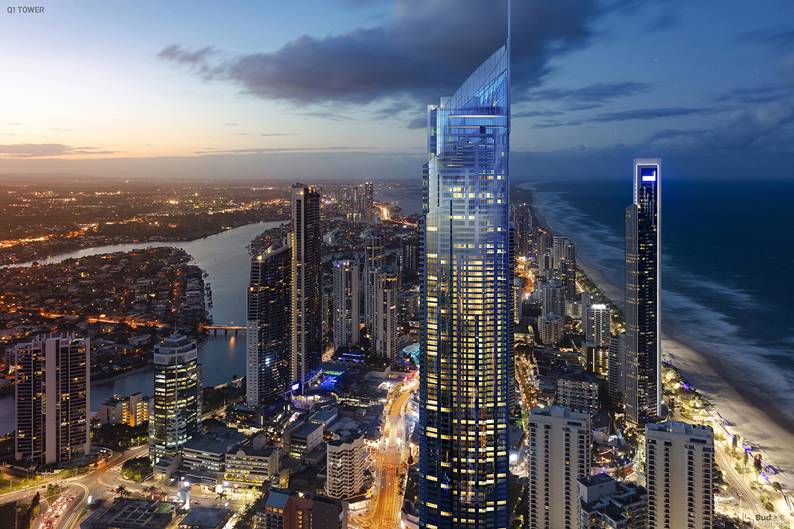 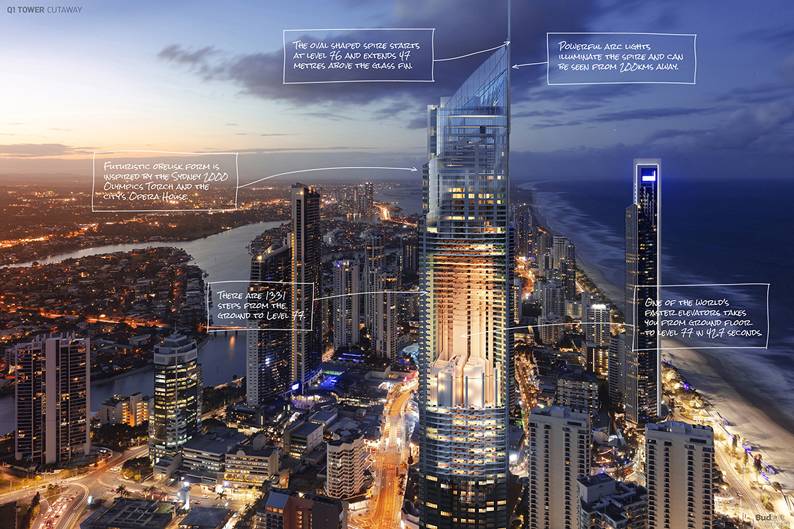 The highest of the building’s 526 state-of-the-art serviced apartments is on the 74th floor. It is known as the Presidential Penthouse. It is 225 metres above sea level, but if you’re desperate to swim, you can just use the suite’s heated swimming pool.

The latest addition to Brisbane’s skyline is divided into three stacking residential ‘precincts.’ Water is the theme, with a façade that is intended to look like a rippling column of water and a crowning, 89th-floor infinity pool – the highest one in Australia. Just like real neighbourhoods, there is a community centre with a swimming pool inside each precinct. 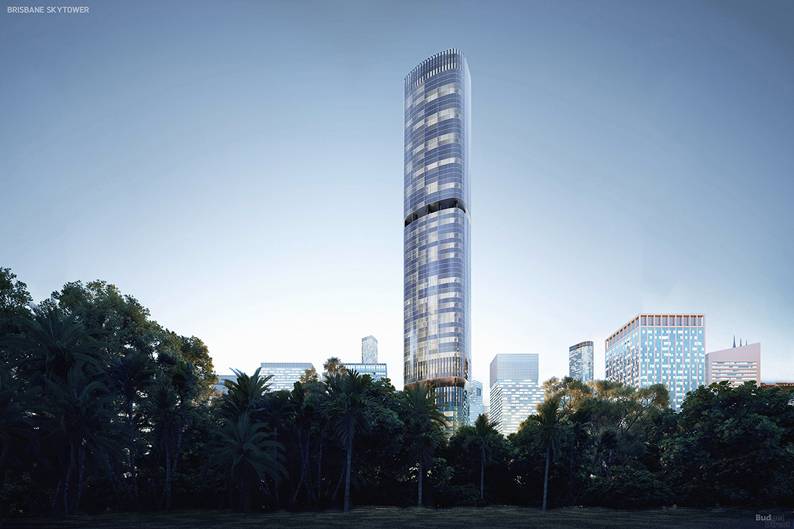 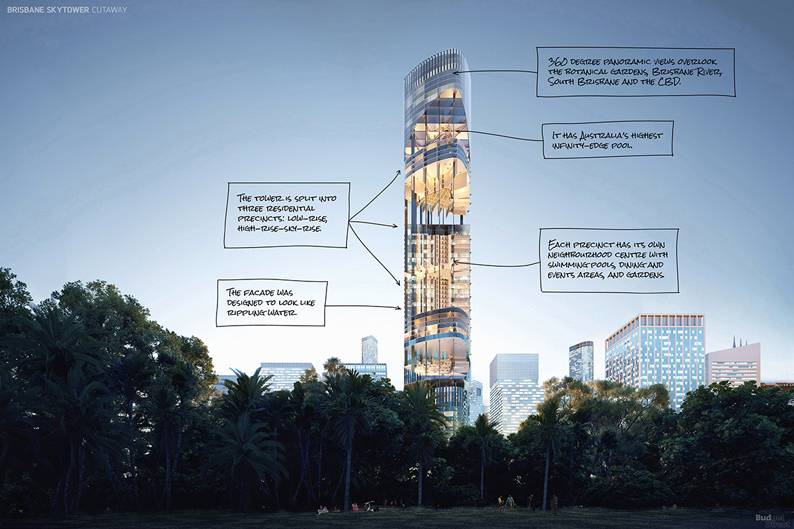 The structure has an equilateral triangle footprint but is actually formed of multiple towers inside. “The ground floor is essentially double-height volumes up to level 2 and will have four lobbies for the separate residential towers,” said Noel Robinson, whose architecture firm designed the tower. The 269.7-metre (885 ft) skyscraper is just five metres short of Brisbane’s height limit.

Australia’s most iconic buildings are even more exciting with their façade removed than they are in their postcard view. Which one would you like to go inside?