Australian roads, safer or
more dangerous than ever?

A new survey has revealed that the majority of Australians think our roads are more dangerous now than they were a decade ago. But are they?

Nearly 70% of Australians surveyed think that our roads have gotten more dangerous in the last decade and nearly a quarter (23.8%) of the respondents think the roads are much more dangerous. But is this actually the case? 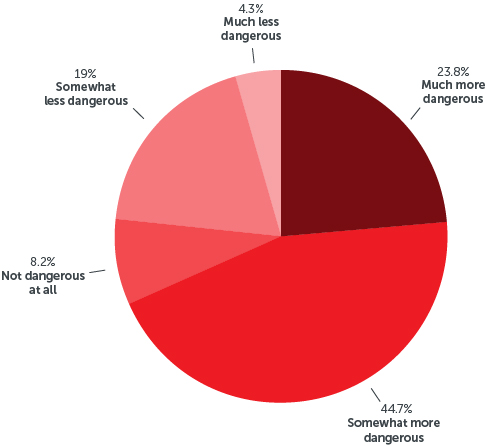 Data from the Australian Bureau of Statistics shows that road accident fatalities in Australia have actually decreased in the past decade by 14.7%1. And to make this reduction in fatalities even more impressive is the fact that there are now more vehicles travelling on our roads than ever before. In the decade from 2008 to 2017, the total number of vehicle registrations increased by 23%1.

So it could be more accurate to say that our roads are ranked between ‘somewhat less dangerous’ and ‘much less dangerous’ than they were a decade ago, but only 23.4% of respondents felt that Australian roads are safer now.

Interestingly, 8.2% of all the respondents said that they didn’t feel that Australian roads were dangerous at all. While the reality of the safety of our roads might be better than the average person might think, they are by no means perfect, with 12,920 fatalities happening on our roads since 20082.

The Northern Territory, while having the smallest percentage of Australia’s population (1%), had 3.5% of all Australian road fatalities in 20172. The rate of road deaths per 100,000 vehicles is also four times higher in the Northern Territory than the national average3.

The ACT on the other hand, had the highest average response with 81.8% of those surveyed thinking the roads were more dangerous now, which contradicts their dramatic reduction in road fatalities in the last decade.

When looking at the results broken down by age group, an interesting trend emerged. 71.7% of younger drivers aged between 18-24 said they felt the roads were more dangerous now than they were in the preceding decade. This was in spite of the fact that most of the respondents would not have been driving themselves in the preceding decade, or only driving for two or less years for the older respondents. This could indicate that these drivers have only become aware of potential dangers on the road after having gotten their license and started driving.

The ‘more dangerous’ response rates dropped down to 63.5% for the respondents aged 25-34 and then down again to 60.3% for the 35-44 year olds, which was the lowest percentage for any age group. This suggests that growing familiarity with driving increases the driver’s confidence in handling dangerous road situations, therefore changing the way they perceive how dangerous the roads actually are.

A potential reason for this higher response rate from older drivers could be the fact that there are notably more vehicles travelling on our roads now. This might be more perceptible to older drivers who have the most experience driving on Australian roads. 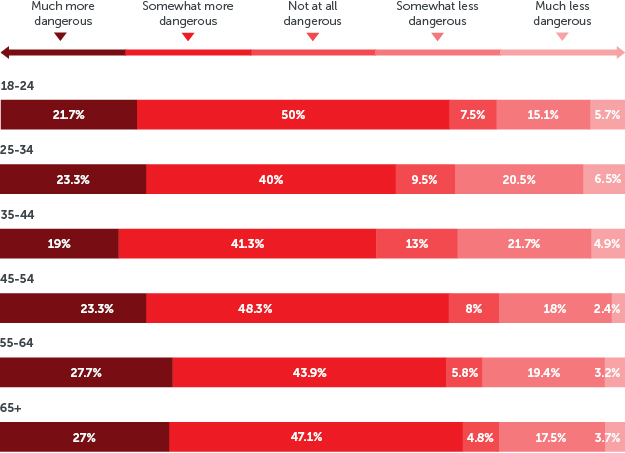 So what potentially is influencing the public’s perception that roads are actually getting more dangerous?

There is a common perception that people are becoming more pessimistic than they were before and this misconception about the safety of our roads could be just one case of this.

Worldwide, trends in overall lifestyle and health are in better shape than at any other point in human history, child mortality is lower, education and literacy rates are higher than ever before and less extreme poverty4. But still people all over the world are under the impression that the world is in the worst state it has ever been in.

There is the popular theory that the media are to blame, that they put too much emphasis on the negative aspects and details of modern life without highlighting the good5. ‘Bad news sells’ and ‘if it bleeds it leads’ can seem to be the mottos of every newspaper, news program and article that appears on social media. Whereas positive developments and improvements are often gradual and slow to happen. With the media’s focus on single events, the good news can often be overlooked.

But the important takeaway is the fact that our roads are in fact safer than they were a decade ago thanks to the implementation of more comprehensive road safety plans being carried out across the nation. And with the steadily decreasing trend of fatalities averaging a 2% reduction each year6, there are strong indications that this decrease in fatalities will continue.

Australia lags behind in driverless cars race
Give way rules - Who goes first?
Road Safety Around Heavy Vehicles
Using a mobile phone while driving
Drink driving in Australia: Who’s to blame?
Microsleeping, how common is it?
Australian roads, safer or more dangerous than ever?
Australia’s need for speed
Are Australians ready to buy cars online?
Distracted driving study proposes a promising way forward
Car Insurance Claims – Not My Fault
Driving safety tips
Can I ride a scooter with a car licence?
Does Car Insurance Cover Rental Cars?
How Much Does Car Insurance Cost?
Electric car survey
How to turn on Do Not Disturb While Driving