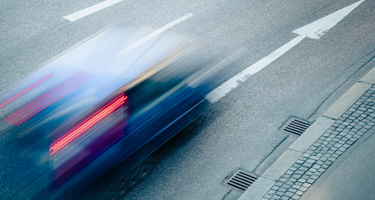 How common is speeding? Does the average Australian think our speed limits should be increased? We’ve conducted our own research to find out everything there is to know about speeding in Australia.

As drivers, one of the first laws we become familiar with is the speed limit. We know that every road has a speed we can go, and you shouldn’t dip over it. But as we become more experienced drivers, are we forgetting the dangers of speeding? And is it becoming more habitual?

It’s worth taking a moment to take our foot off the pedal, and consider the real implications of speeding. To help you understand everything there is to know about speeding in Australia, we’ve put together a guide covering:

What counts as 'speeding'?

There are two ways we can think about speeding. The first is in relation to the road’s speed limit, and the other concerns the conditions of the road.

Once your car is travelling faster than the posted speed limit of the road, you’re classified as speeding. This is typically what police will use to determine the safety of your driving.

Speeding can also occur when you drive faster than is safe. If you are faced with wet weather, fog, changed traffic conditions, roadworks or other interferences, it’s important to reduce your speed to suit the conditions.

The risks of speeding

It’s common knowledge that greater speeds carry greater dangers. This is because faster cars require greater distances to slow down, and the potential impacts themselves can be far more damaging.

Chance of survival for a pedestrian being hit by a car

*Assuming the pedestrian is a young adult. Data courtesy of the NSW Government.

Speeders in Australia risk a combination of three different punishments if caught, namely –fines, demerit points, and potential automatic licence suspensions. For a more specific view of your state's punishments, you can click a state's title to remove it from the graph.

*Above 25km/h in Victoria, they start issuing automatic licence suspensions.

*Most states and territories have laws in place where automatic suspensions can be applied for serious driving offences, at the discretion of the courts.

Fines and licence penalties have been calculated assuming the driver does not have a provisional/learner licence, they are driving a regular car (under 2.5 tonnes), and they are not in a school zone.

In a study of 1,010 Australian drivers conducted by Budget Direct, we found the following results:

Have you had a speeding fine in the last 12 months?

Only 8% of Australians have indicated they have received a speeding fine in the last 12 months. This rate almost doubles for those aged between 18 and 24, who showed a 16.3% rate of receiving speeding tickets. However, the rate for those aged 55 to 64 was around half that of the total population.

What do you think is the main contributing factor to speeding on the road?

The most common reason Australians gave for explaining why people speed was a lack of attention being paid. Men seemed almost twice as likely as women to think “habitual” speeding was to blame, whereas women were more likely to blame a sense of “urgency to get somewhere faster”.

What tactics do you think are most likely to deter people from speeding?

Most respondents of the Australian Capital Territory think that more speed cameras are the most effective way to deter speeders. This aligns with their fine rates, having the nation’s most expensive speeding tickets for speeds less than 10km/h over the limit.

Western Australians seemed the most convinced that increased fines would deter people from speeding. Coincidentally, for low-level speeding infringements, Western Australia has one of the lowest fines in place (costing as low as $100 for a speeding fine).

What do you think should happen to the speed limit on Australian highways, freeways, and motorways?

See more of the results from our survey on speeding.

What you should consider on the road

Speeding doesn't save you as much time as you think

In 2010, Associate Professor Eyal Peer published a study showing how speeders often think they’re saving far more time than they are. This effect was called the “time-saving bias”, where drivers think that their speeding is more effective than it really is. In reality, you might shave a minute or two off a long drive – but nowhere near as much as you’d think.

No matter how much attention we might be paying, humans make mistakes. Perhaps someone will pull out without properly looking, or maybe they’ll change lanes without checking their blind spot.

Quite often, it won’t be you that causes an accident. But if you’re speeding, you also might not be able to prevent it.

You won't know what's dangerous until it's too late

Maybe you’re used to going 10-15km/h over the limit, and you’ve never felt in danger. That is, until the day that it’s a little damp, and suddenly your grip isn’t quite as good as it needs to be. All of a sudden, what should have been a safe turn sees you swerve off-road, or into oncoming traffic.

The risks of speeding are sadly all too well-known, and it’s worth considering that even if you’ve never felt the danger first-hand, it does exist. For the sake of saving a matter of minutes on your drive, it’s not worth it.

Disclaimer: This survey was conducted by Pure Profile on behalf of Budget Direct in April 2021. The survey was conducted online with a total sample size of 1,010, weighted and representative of all Australian adults (aged 18+) with driver’s licences. All other data on this website is the latest available from the named sources in this article, and was obtained in April 2021. Auto & General Services Pty Ltd does not guarantee the accuracy or completeness of the data and accepts no liability whatsoever arising from or connected in any way to the use or reliance upon this data.