The hiatus of the Supra from the roads, tracks and quarter-miles of the world has only seen its legendary status grow. The memory of this semi-mythical beast had been surviving through Gran Turismo, the Fast and the Furious franchise and all-too-rare sightings at cruise meets. Until now that is, as the Supra is about to be reborn, incubated and hatched in the white heat of BMW’s Z4 production facility in Austria.

While we’re ecstatic about the return of this icon of speed, its manufacture location and the collaboration with BMW got us wondering about what work of auto-art could have been sculpted if Toyota had gone for a different partner. The options were endless but here’s a taste of the different directions that things may have gone in if 8 car brands collaborated with Toyota to build the 2020 GR Supra, instead of BMW.

Aston Martin is the ultimate in British cool, but what kind of car would they create if James Bond had to go undercover at an illegal drag race? Well a Vantage-Supra cross-breed obviously. We imagine it being based on the Aston’s chassis but with the front end pinching slightly creating the Supra’s bow wave effect. Naturally if 007 was to really fit in on the scene, along with ditching the suit and martinis, he’d definitely have to keep the LED strips over the headlights.

Apart from the visual aspects, the Aston Martin Supra would still need to be a performance beast, so the Supra’s cooling front intakes would be a must, though combined with a tougher, Vantage-esque front grille. 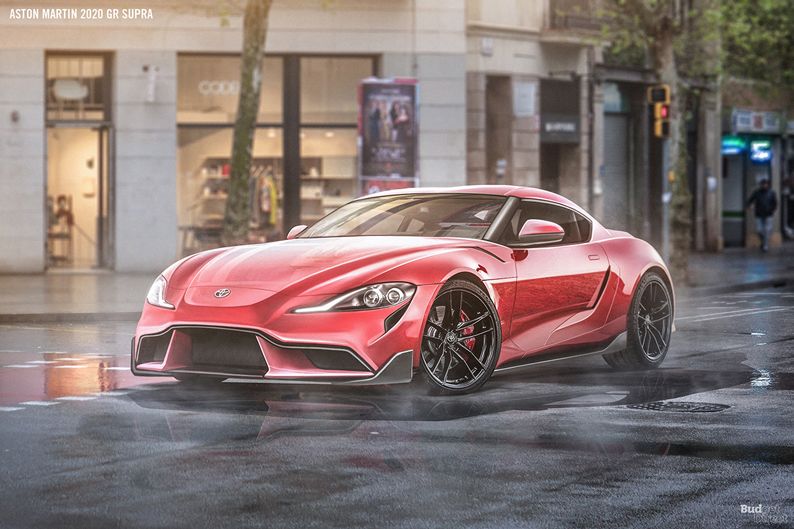 Considering their national rivalry, it’s likely that Mercedes would feel that whatever BMW could do, they could do better. By bringing their high-performance AMG design team into the picture we wouldn’t be surprised if they did too. With the base for the collaboration being the AMG GT roadster, the body would already suit the Supra’s flow and lines. The front would be flattened out in line with the Merc but opt for the Supra’s sleek and aerodynamic front end.

With their greater motorsports knowledge, Mercedes would want to make this a track battle. So their version of the Supra would focus heavily on streamlining and reducing drag. Though the Supra was defined by its straight-six it’d be hard to resist sticking the AMG GT’s V8 turbo up front to really push the limits of speed and sound. 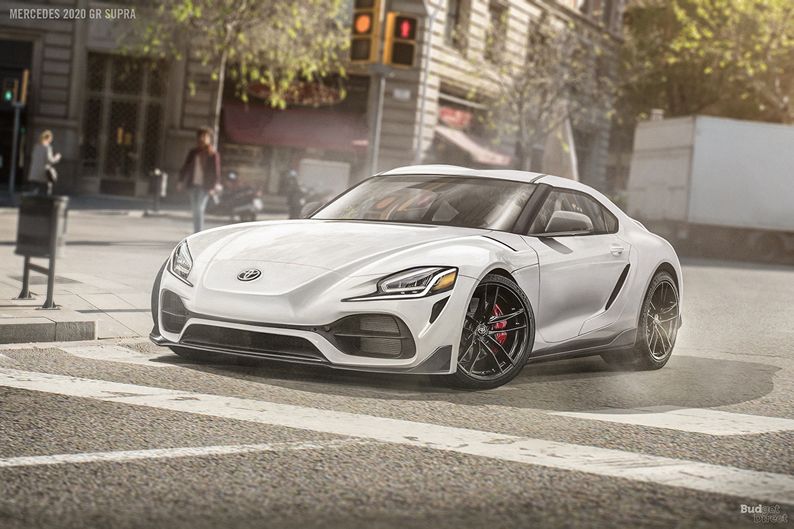 If Toyota had wanted to quest for the ultimate sports car with the new Supra, then the match-up made in heaven would have to be with Ferrari. With the 812 Superfast there are already plenty of cross-overs with the front-engine, rear wheel drive layout but the major impact of Ferrari’s design input would be on performance and aesthetics.

The deeper, full length side intakes would increase underbody airflow, reducing drag and supplying front intakes for cooling the brakes. Looks-wise, the bonnet would be wider in line with the car’s extended width, curving up at the sides like the hunched shoulders of a tiger ready to pounce. 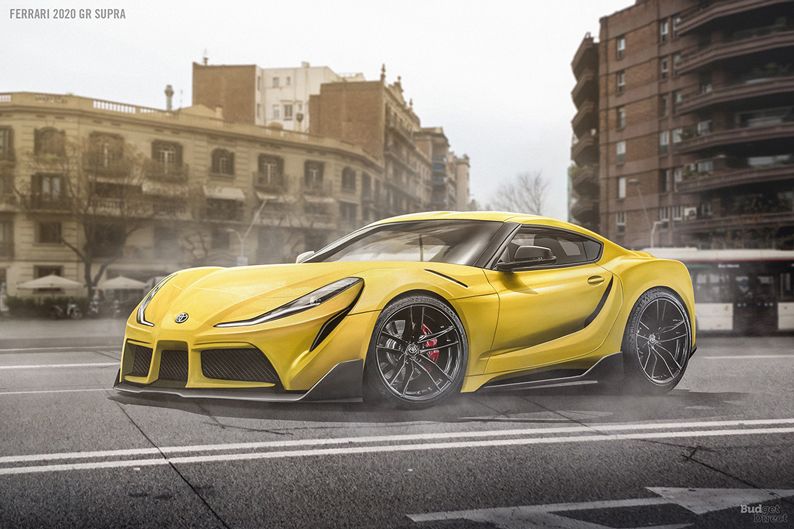 Though it’s always nice to dream of the potential purring power reverberating through the Supra, one of its original charms was the fact that it was, relatively, price-accessible to your average speed-jacked Joe. So, what’s sporty, good-looking and cheap as gold-plated chips… A Peugeot 208!

While the supermini would be converted to a two-door, a lot would also have to be shaved off the standard Supra long front, but they’d still manage to keep the Toyota’s dipped nose and sportier grille. The lights would have to get an upgrade as well, going from your bog-standard supermarket illumination to a sleeker, LED-fuelled “supermarket carpark” look. 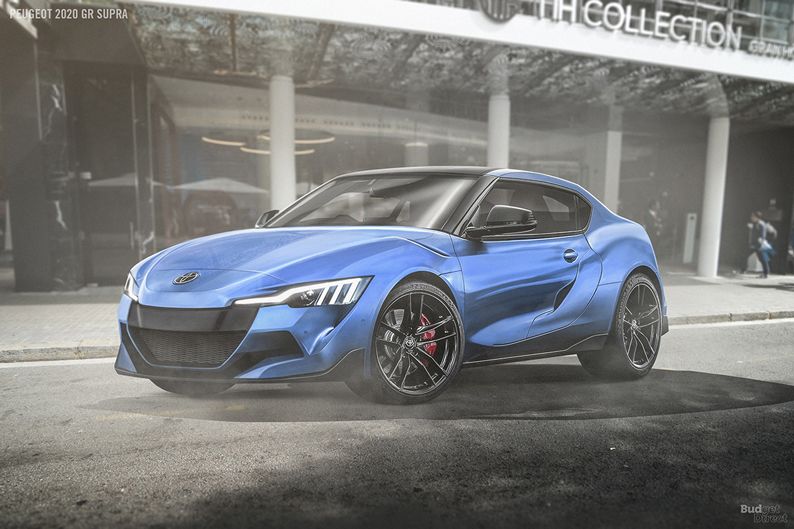 Though long-time rivals for dominance of the Japanese car industry, Toyota coming together with Nissan to create the new Supra would give us a favourite national monster right up there with Godzilla, except instead of laying waste to skyscrapers the Nissan Supra would stick to tearing up track.

It would keep the unmistakable Supra style of the stretch headlights and door vents but, being based on the chassis of Nissan’s 370Z speedster, it would be a bit shorter than a Supra might be expected to be. Its front would start out with the Supra’s curves but flatten out towards the nose, taking its lines from the GT-R.

Any list of Supra collaborators would be incomplete without the intervention of some American muscle and nothing represents the beefy brawn of Motown better than the eternal Corvette. Of course, the chassis would have to be widened significantly to make way for the new C7’s 6.2L supercharged V8 but that’s a compromise most would be happy to make.

It would also mean getting lower to the ground than a passed-out limbo dancer as the Corvette Supra would need to harness as much downforce as possible to help it handle its newfound power. Naturally that kind of heat would have the engine gulping for air so a traditional Corvette hood scoop intake would have to come as standard. 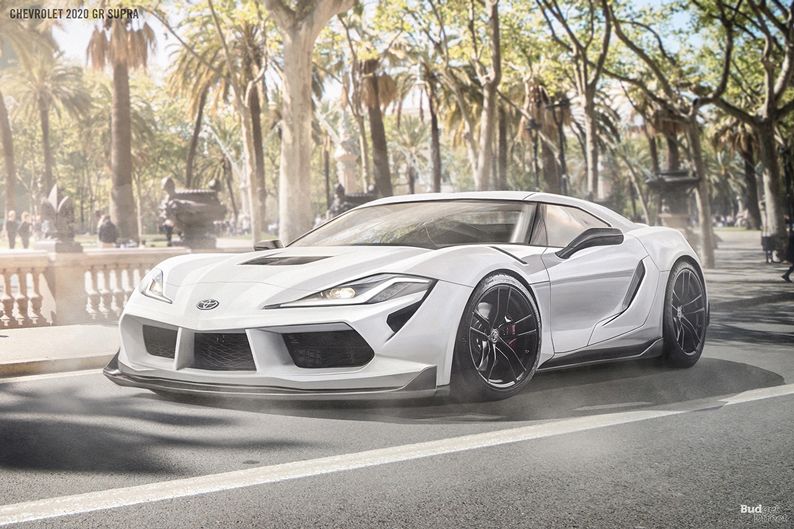 Undoubtedly the most dramatic change Toyota could have made with the new Supra, apart from maybe adding jet engines or a sidecar, would be to ditch the inline-six and make the entire powertrain electric. This would naturally horrify the traditionalists but, hang on, hear us out.

Firstly, the acceleration, not necessarily the Supra’s strongest suit, would be like lightning. Secondly, the design additions drawn from Tesla’s Model S would definitely fit the bill. The rather striking closed front of an electric would come in, as well as a glass roof, which overall would give the Tesla Supra a look of understated minimalist class while still having a sporty feel. 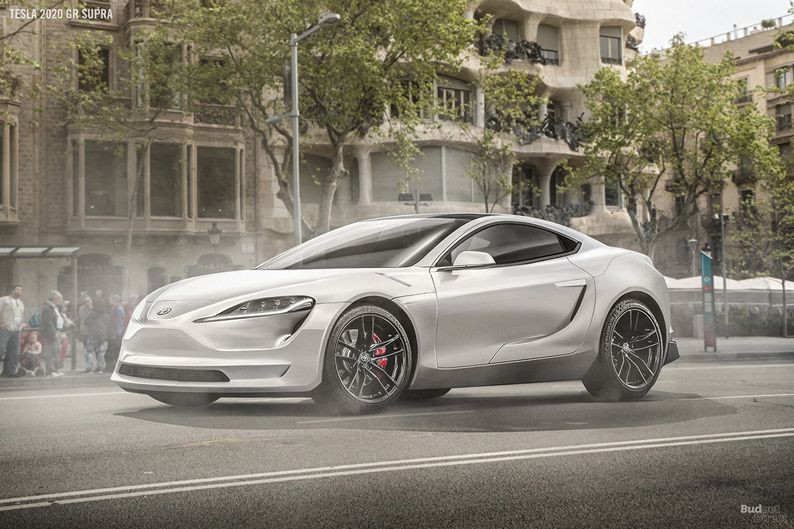 While most Supra drivers were more speed nuts than safety nerds, they’ve probably grown up since the Supra was last in production. Maybe they’ve changed, having different priorities and less of a devil-may-care attitude. In which case it wouldn’t be extraordinary to imagine that for its newest iteration, Toyota could have brought Volvo on board. Not that this snug functionality would take away from the class and stereotypical good looks the Swedes would have brought to the mix.

Modelled on the sturdy lines of the V60 the car would still retain its sporty spirit with a piercing front nose and pinched midriff. The Volvo can easily be seen in the sturdy shoulders and strong boxed rear but the Supra’s curved, drag-reducing body would make sure speed is still the paramount concern. 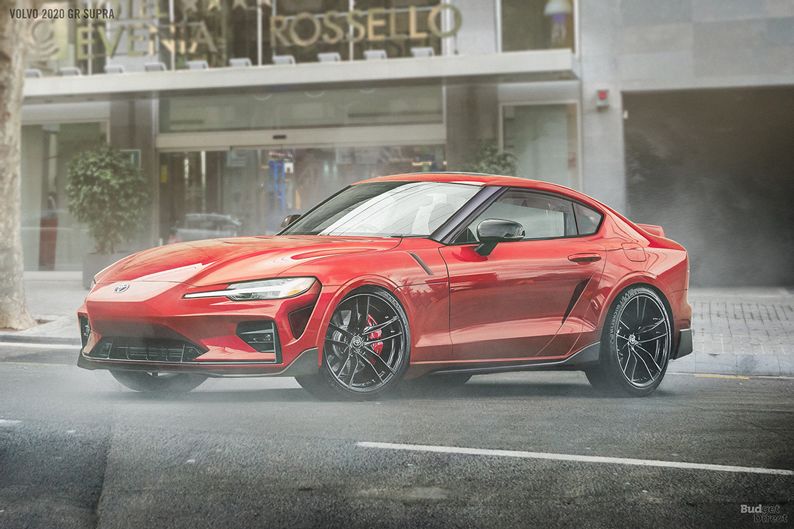 It’s taken far longer than three days but the Supra is finally coming back, and not only that, it’s being reborn with the help of rival marque, BMW. This news was a bit of a surprise and has got us curious about how the legendary track star could have turned out if Toyota had swiped right on someone else. We’ve mixed it up a bit, showing what would happen if 8 car brands collaborated with Toyota to build the 2020 GR Supra, instead of BMW. But the options are still practically endless for awesome match-ups. Who do you think would have made the wildest partner for the new Supra?