It’s relatively easy to make a splash in the motoring world. Hitting the highest speed or engineering a lightning-fast 0-62 will make you flavor of the month for the industry magazines, but making a more permanent, genre-defining impact takes something much greater. We should probably disregard most of the temporary splashes because it’s the waves that matter and when it comes to sports cars, the most powerful and definitive force of nature has been rosso corsa-coloured and made by a prancing stallion.

Everyone has an almost tangible idea in their head of what Ferrari means, but how has it managed to actually achieve its position of preeminence in a crowded field? Through persistent innovation in both style and driving experience, that’s how.

This consistency of sublime sports car perfection only becomes clear when one casts their eye across the entire breadth of Ferrari’s production over almost 80 years. What has been created here is like a time-lapse video illustrating the constant birth, rebirth and evolution of car manufacturing’s finest marque over the course of eight decades. It is a fascinating visual experience for all car fans and, indeed, aesthetes in general, to see every Ferrari ever made.

The GT concept was focused on the idea traversing a continent with style, speed and comfort. Naturally, Ferrari, beginning with the divine 166 Inter in 1948, has set the benchmark for excellence in all three. The list of Ferrari’s classic GTs reads like a motoring Hall of Fame and its latest models show that the marque is still fully intent on pushing boundaries rather than resting on its laurels.

Ferrari works hard to cultivate the loyalty that makes its fans and collectors the most dedicated in the world. One of the benefits of being a true super-owner is that every once in a while, the Ferrari production team will invite them to take part in creating a completely unique ‘One-Off’. The results can vary, but if you’re an obsessive collector (like Eric Clapton with his classy SP12 EC), nothing can compare to literally having a Ferrari made just for you. 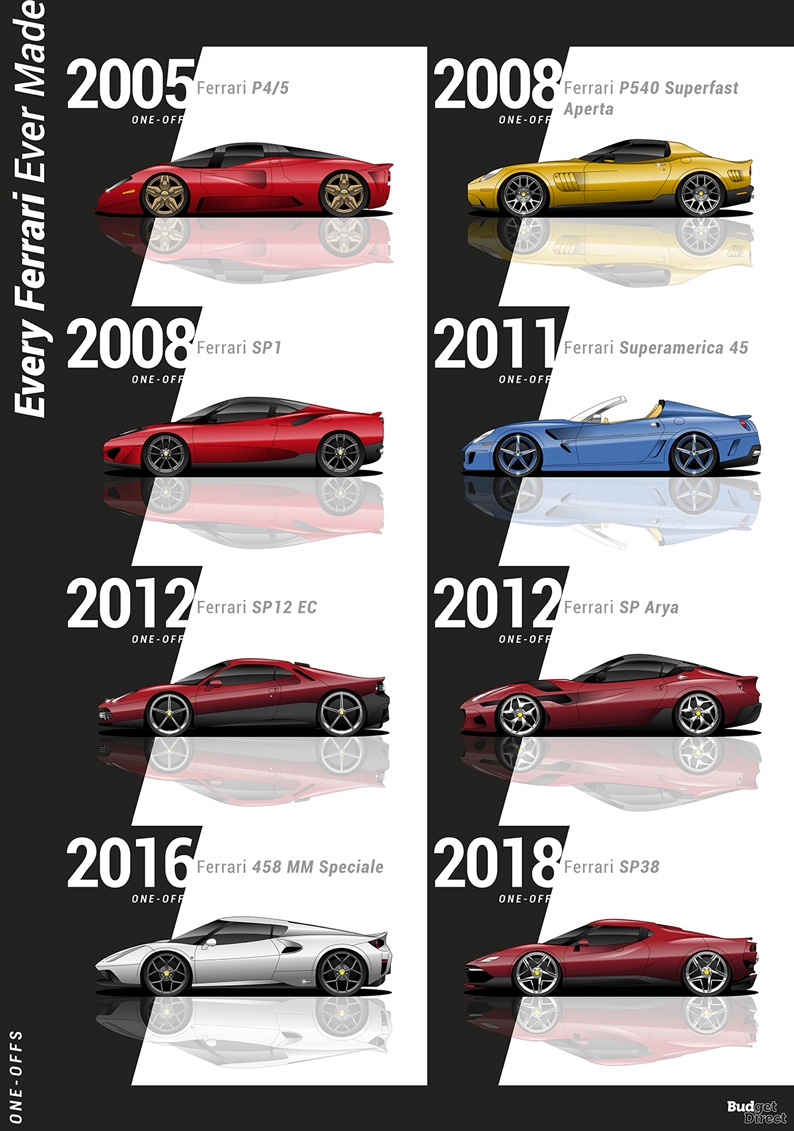 Ferrari’s Sports Prototypes were, historically, the car marque’s top-of-the-line racing cars. Due to regulations, entrants to most races (such as Le Mans) needed to be based on the chassis of a production car. Though the foundations of the Prototypes may have been “standard”, everything else was pure racing magic.

The innovations that Ferrari introduced to racing, such as aerodynamics, engine mechanics, and steering were all pioneered through their Sports Prototypes. Here you can see how all of those original creations grew and evolved year to year. 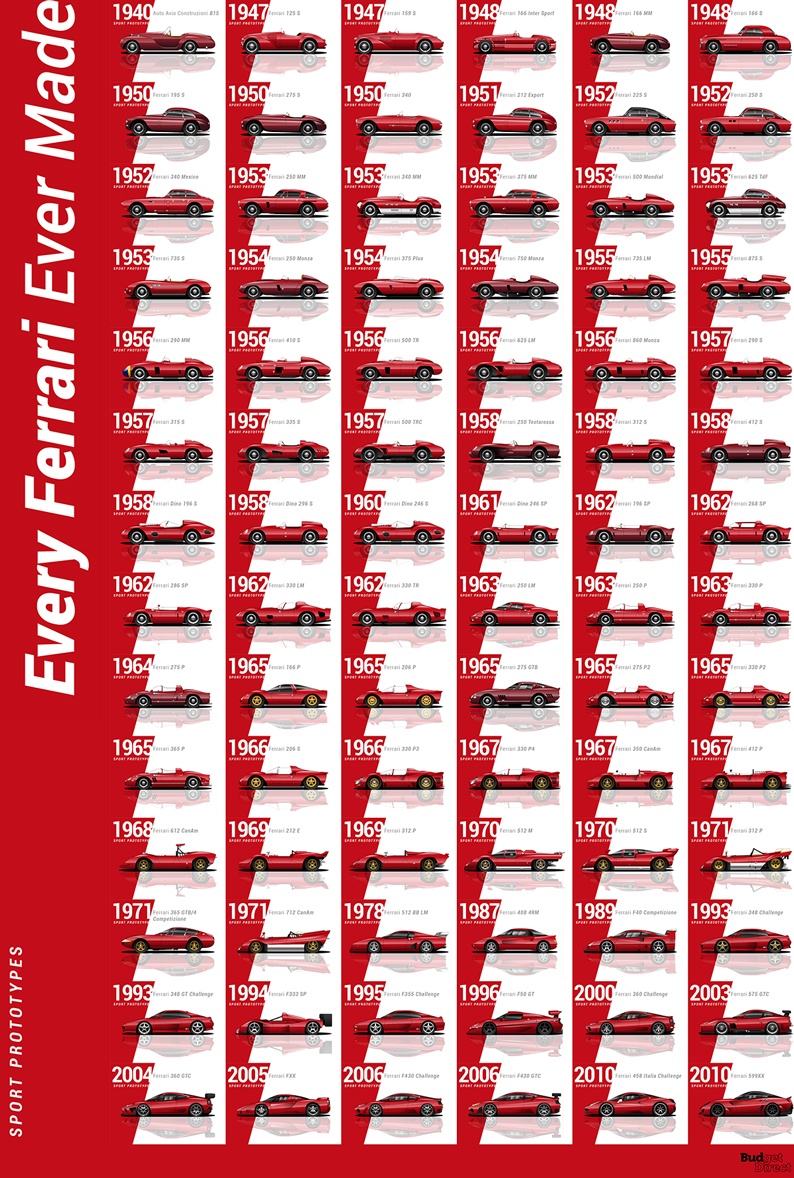 Ferrari has created many masterpieces throughout its existence but despite more than 200 models being produced, no two cars are ever the same. Other car makers could be accused of striking on a definitive look that they constantly reproduce but Ferrari has always been notable for its willingness to tear up the blueprints and create something bold and radically new. To see how they have achieved this over the span of eight decades is to look upon work of true motoring genius.

This side-by-side comparison of more than 200 models ranging from prototypes to grand tourers to unique, one-off specials, allows us to observe the inception and development of the defining concepts of motoring brilliance over the years. It truly is a wonder to see every Ferrari ever made. 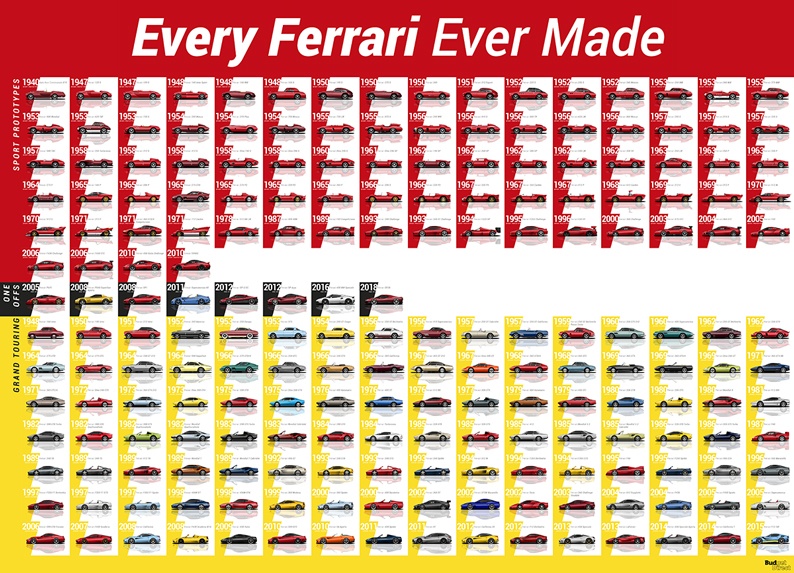