Each October, the Bathurst 1000 pits the highest-performance ‘street-legal’ supercars head-to-head on Mount Panorama. This thrilling contest has come to be known as the Great Race. The history of Bathurst is a story of extraordinary vehicles – the kind you might see on next door’s driveway, or even save up for yourself.

The race started in 1960 as the Armstrong 500, a 501-mile endurance race designed to celebrate the speed and durability of Australian-built cars. After the vehicles pounded the original Phillip Island Grand Prix Circuit into submission, the contest was shifted to Wahluu (also known as Mount Panorama) in 1963. The course was extended to 1000 kilometres (621 miles) in 1973 due to faster cars, fiercer enthusiasm, and – ahem – decimalisation.

As the decades progressed, changes in the course, the culture, and automotive engineering led to new classes of vehicles getting the call to participate. But Bathurst remains a “people’s race” of powerful, everyday motors. You can even drive your own car on the course since it’s a public road – but make sure to keep to the 60 km/h (37 mph) limit as the police are watching closely!

When the Great Race was first run on Phillip Island in November 1960, the cars were divided into five classes according to engine capacity. No ‘overall winner’ was to be declared. However, the first car to pass the winning line was a baby blue Vauxhall Cresta driven by John Roxburgh and Frank Coad, in the 2001cc-3500cc category.

Roxburgh and Coad are (controversially) considered to be the first (unofficial) winners of the Great Race. But some claim the Russell/Anderson/Loxton team covered the ground quicker in their Peugeot 403, which joined the race 30 seconds later than the Cresta due to staggered starting times between classes.

The race moved to Bathurst in 1963, but the first winners at the new course were familiar. Harry Firth and Bob Jane had taken the honours in ’61 in a Mercedes-Benz 220 SE and ’62 in a Ford Falcon XL. They made it three-in-a-row at Bathurst in a Ford Cortina GT. The Bathurst course would come to be seen as a battle between small, agile cars that take bends well, and faster, less manoeuvrable cars that excelled on the straights. The Cortina was decidedly the former – but nippy enough, too. 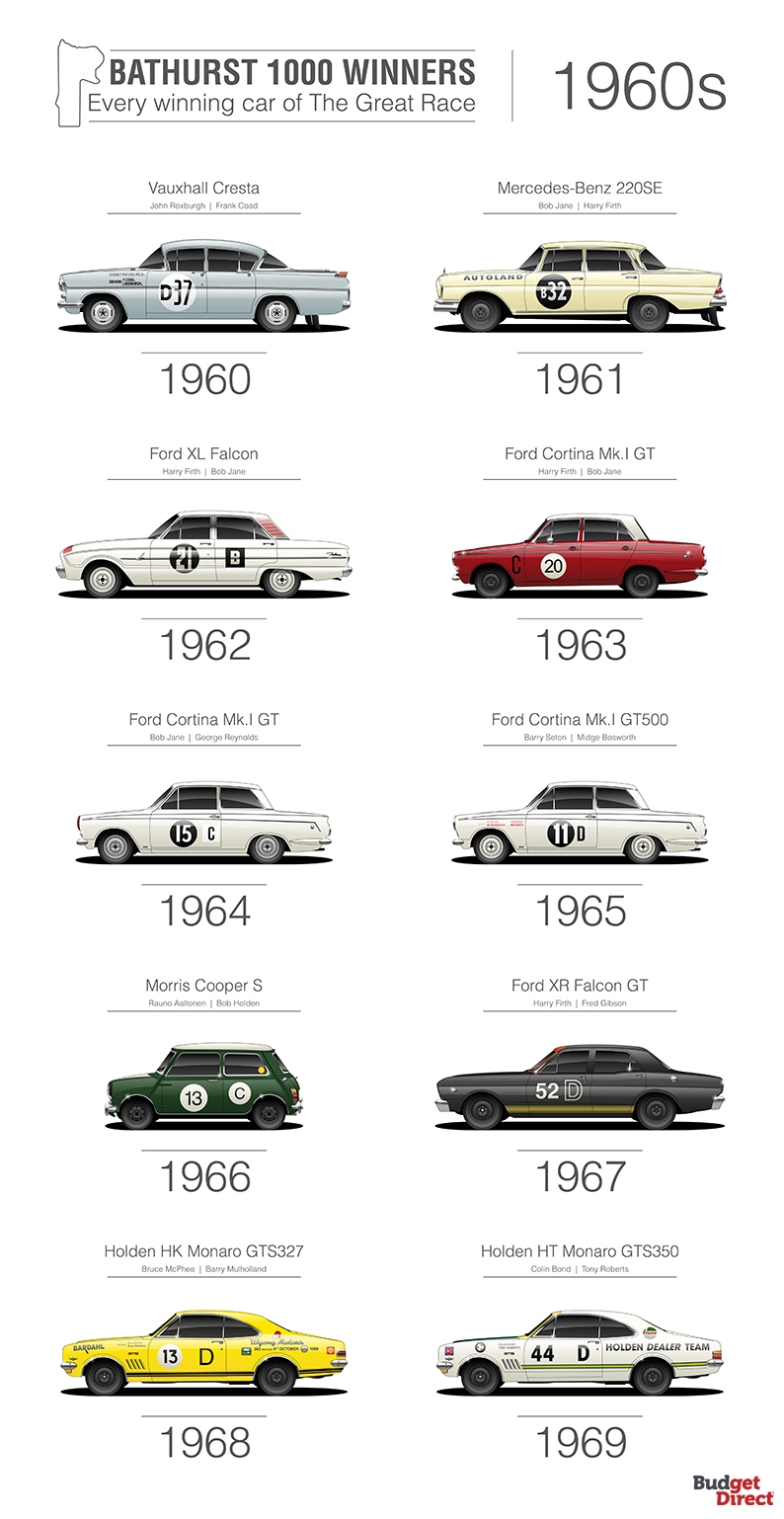 The dawn of the 1970s came with a new rule stating that single-driver teams were now eligible to compete. Canadian-Australian driver Allan Moffat took full advantage, winning the ’70 and ’71 contests in a Ford XW Falcon GTHO Phase II and Phase III, respectively.

Phase III was a distinct advance on the II, with an upgraded engine, four-speed top-loader gearbox, and 36 imperial gallons (164 litres) fuel tank. It was the world’s fastest four-door production car, capable of speeds up to 228 km/h (142 mph). There are probably fewer than 100 complete Phase IIIs in existence – and one sold for a record AUS$1,030,000 in 2018.

Moffat won ’73 and ’77 in a Falcon, too, but the rest of the 1970s would be dominated by Holden’s 308 cubic inch, V8-powered Toranas. This was the dawn of the Torana as a legendary, truly Australian performance car – Torana is an aboriginal word meaning, “to fly.” 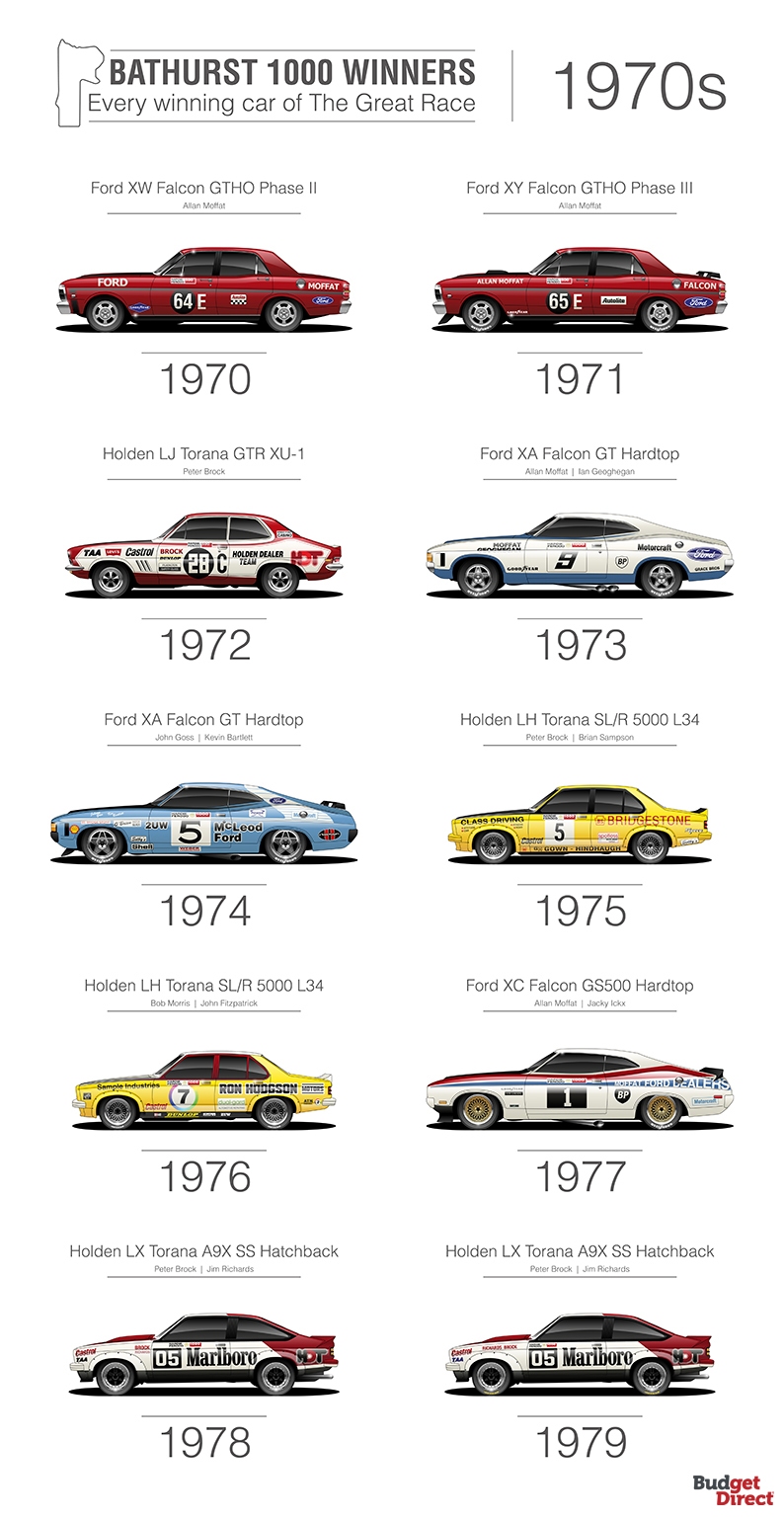 The eighties continued the battle between Ford and Holden. Holden switched up the Torana for a series of Commodores, while the Falcon gave way to the Ford Sierra towards the end of the decade. It would not be the last we would see of the Falcon.

Bathurst adopted international Group A regulations between 1985 and 1992. The first to take advantage was Scot Tom Walkinshaw’s three-car factory Jaguar team, complete with imported mechanics and spare parts. This was a big change from the days when drivers had to resolve their own mechanical problems using just the tools that came with the car.

The plucky Australian-built Group A models, still under development, stood little chance against the powerful V12 engine of the winning Jaguar XJ-S. However, this is the last time Jaguar has won Bathurst to date. 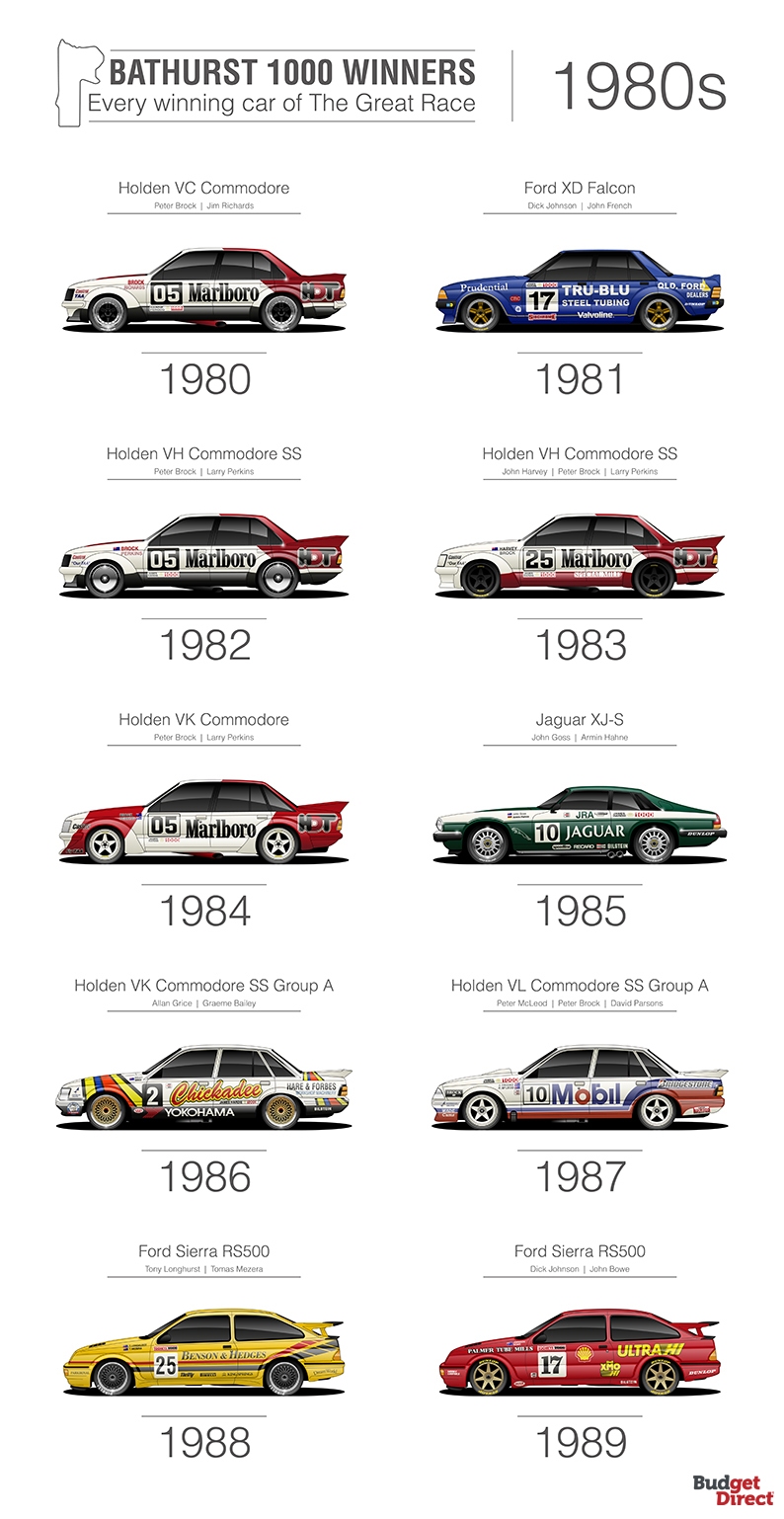 Nissan made an imposing debut in 1990, fielding a twin-turbo Nissan Skyline GT-R with four-wheel drive and steering and a 2.6-litre six-cylinder engine. After figuring out the course in ’90 and pulling up in 18th position, Jim Richards and Mark Skaife piloted the Skyline to first place in ’91 and ’92.

But Nissan’s dominance was short-lived. The new Group 3A category in 1993 effectively reduced the contest to a battle between Ford’s Falcon and Holden’s Commodore, although a two-litre sub-category kept bigger cars eligible for a secondary prize.

Multiple races were run in ’97 and ’98 due to a dispute about broadcasting rights. All the winners are today considered legitimate in the records. Paul Morris and Craig Baird soared to victory in a BMW in 1997, although their prize was forfeited to the second-place car – also a BMW 320i – driven by Geoff and David Brabham.

A Holden Commodore took the trophy every year from 1999-2005 as the model evolved right through the Commodore’s ‘third generation’ from its VT series to the VZ. Greg Murphy set a lap record of 2:06.8594 in the VY edition in 2003.

The main changes between the previous year’s VX and the record-breaking VY were cosmetic, so Murphy is to be admired for pushing the car to new heights – and he looked pretty good establishing “the lap of the gods.” Many fans and experts reckon it the greatest lap in motorsport history.

Craig Lowndes and Jamie Whincup won back some dignity for the Falcon over three consecutive wins, 2006-8. But the noughties were unarguably the decade of the Commodore. 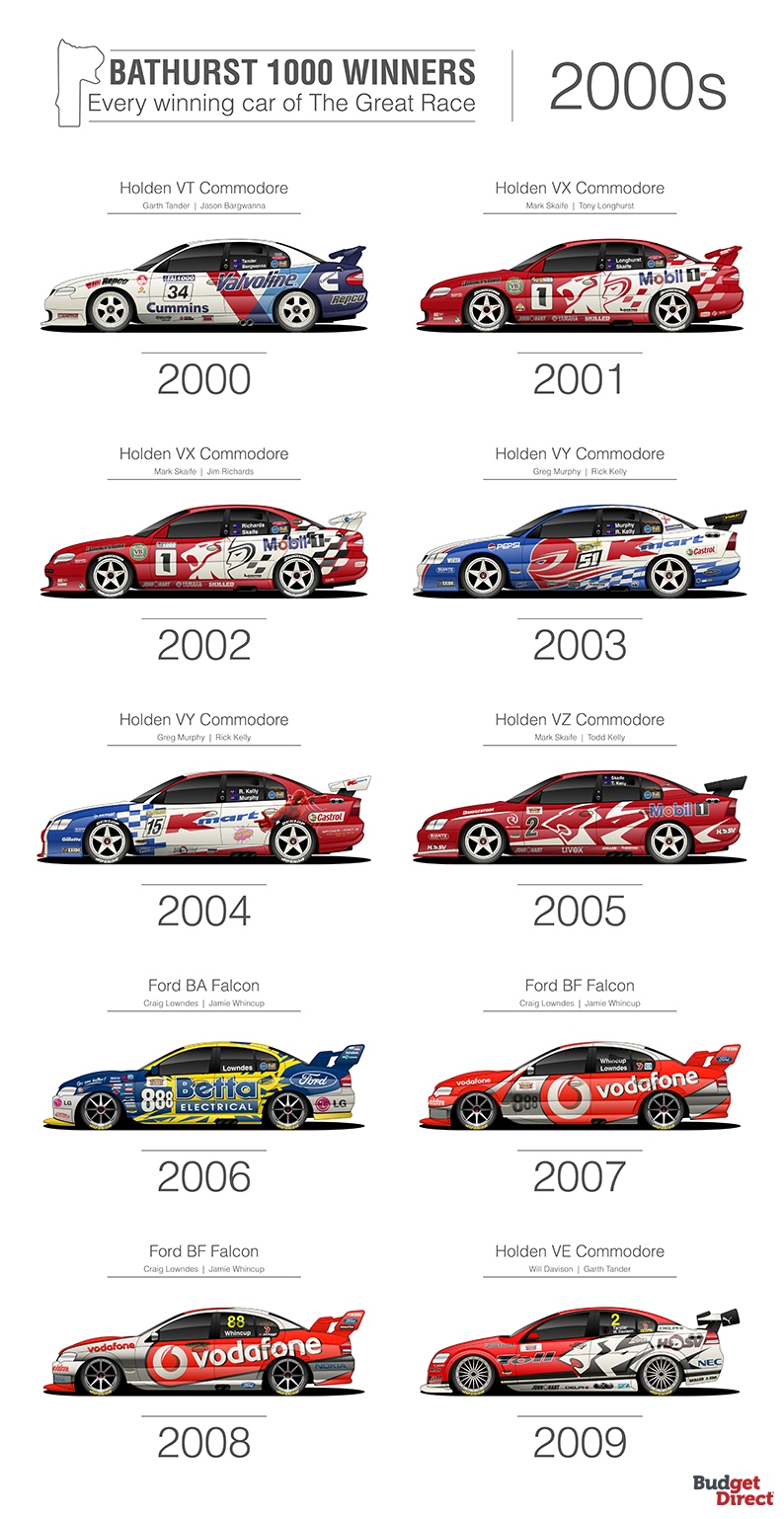 The Great Race reached another turning point in 2013, with the introduction of New Generation V8 Supercar regulations. Makes other than Ford and Holden came back to the race, although Ford’s Falcon set a new track record to narrowly pip a trail of five Commodores to the post. The highest-placed ‘other’ make was a Mercedes-Benz E63 AMG. It came in 54.2 seconds behind first place.

The ‘Supercars Championship’ era was inaugurated in 2016 and taken by a Commodore for three years in a row. However, 2019 became the first year that no Australian-built car raced the Bathurst 1000. The Falcon was discontinued in 2016 and replaced with the Mustang, while production of the Holden Commodore now happens in Germany.

A Mustang S550 driven by Scott McLaughlin and Alexandre Prémat took the honours in 2019. It was the first time a Mustang has been number one at Bathurst. 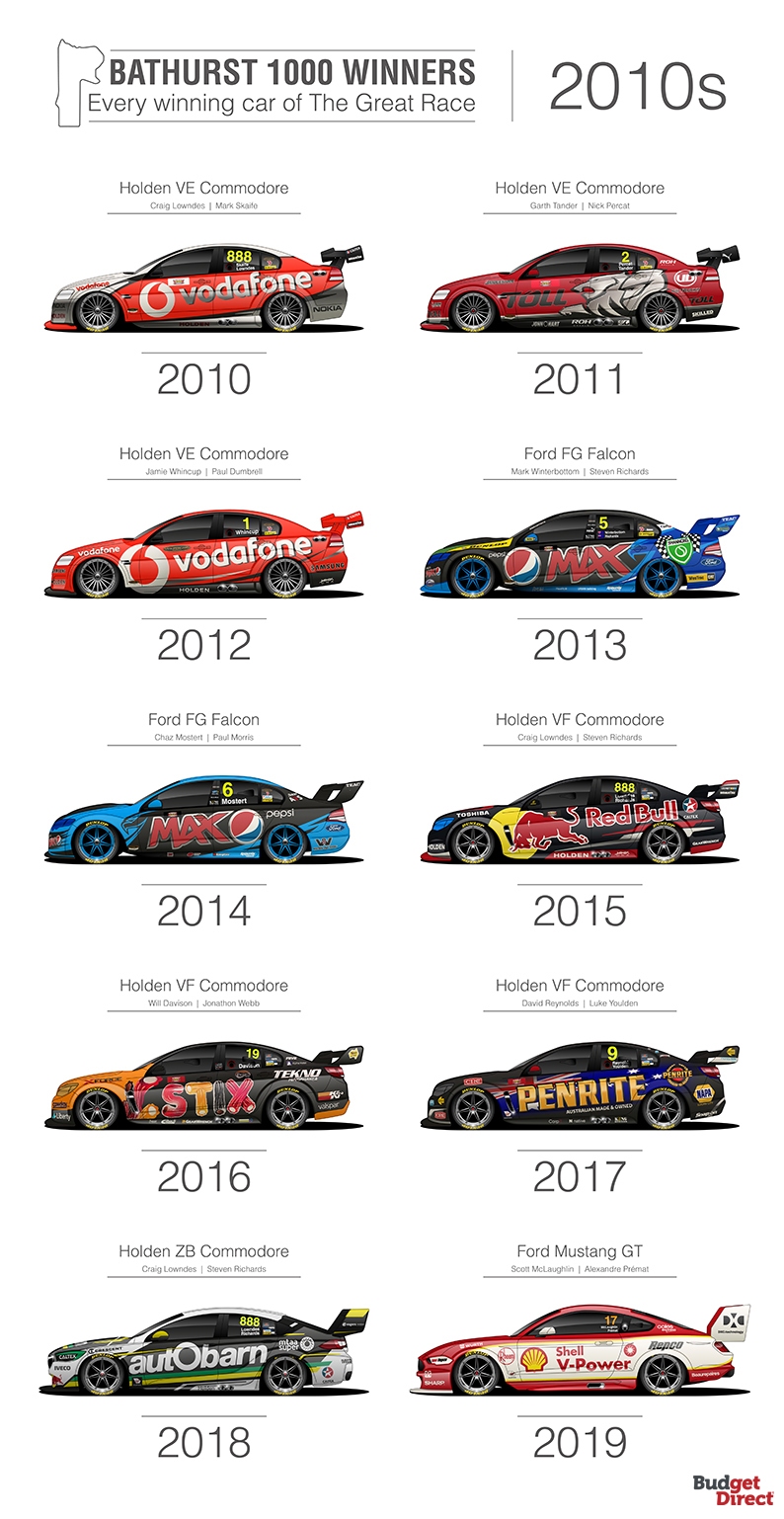 The Bathurst 1000 reaches the grand old age of 60 in 2020, but it gets faster every year. Tweaks to the rules and cars mean the Great Race is not quite as ‘no frills’ as in the early years. But the winning cars remain superb, powerful examples of the kind of vehicle an ordinary racing fan might actually keep in their garage. 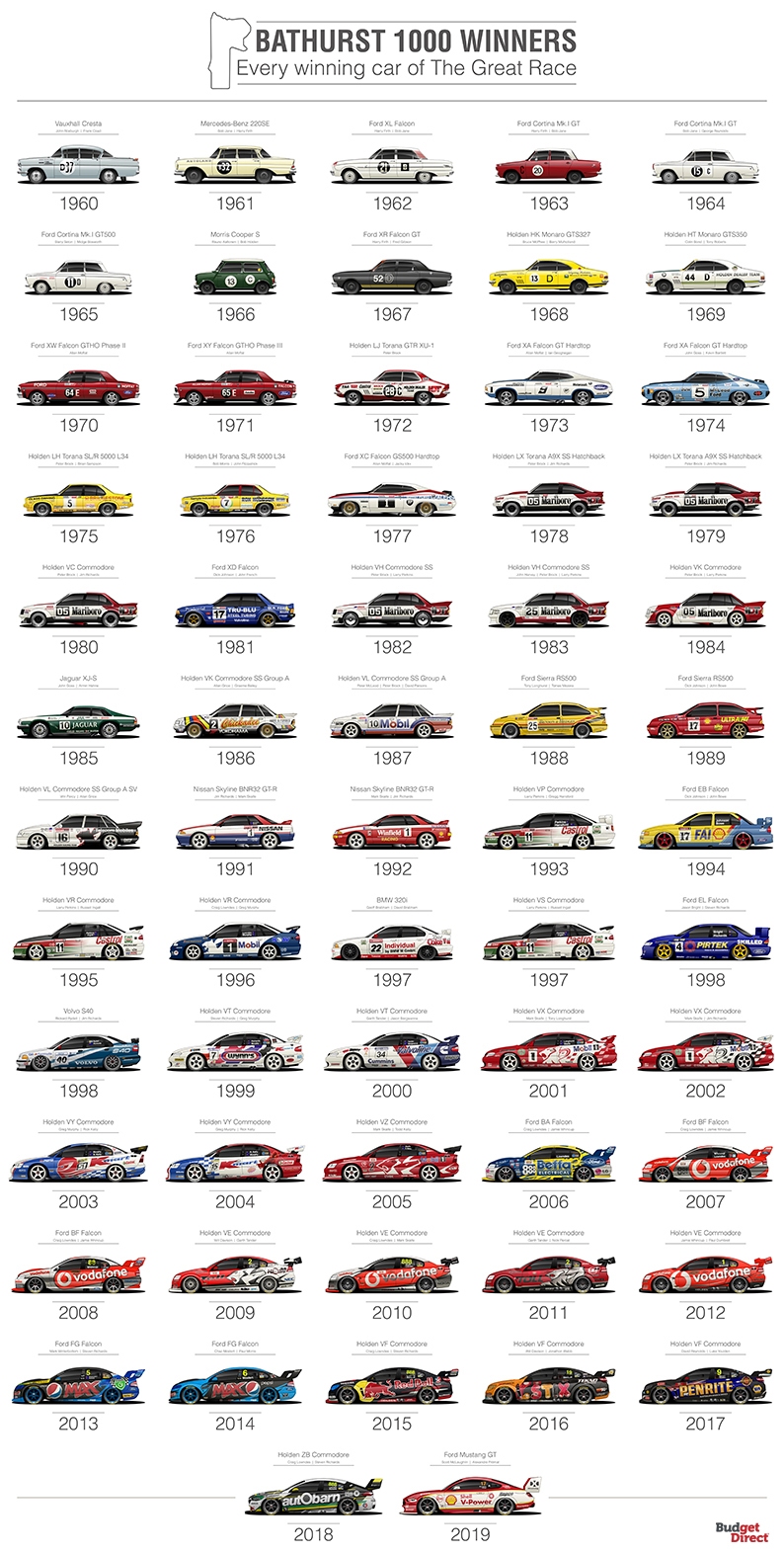 To see the sources behind this piece visit – bit.ly/Bathurst1000Winners