The mouthwatering prospect of a merger between Renault and Fiat-Chrysler Automobile (FCA) was recently put on the menu by the two companies, but in a case of ‘too many cooks spoiling the broth’ it was whisked off again a few weeks later as the respective chiefs failed to agree on how such a fusion would be achieved.  For a few weeks however, car fans were salivating at the prospect of the new crossover creations that could have emerged from the manufacturer.

The merger plans would have seen the combined group become the third largest car manufacturer in the world (possibly the biggest if Renault’s alliance with Nissan was carried over), delivering massive savings from joint purchasing agreements as well as a meeting of creative minds on battery technology. However, it was a crossover of some of the world’s most iconic vehicles that would have got car lovers everywhere excited.

To help lessen the disappointment of this failed merger, we’ve decided to create images of what we imagine would have been some of the coolest combinations to come out of the merged superpower. 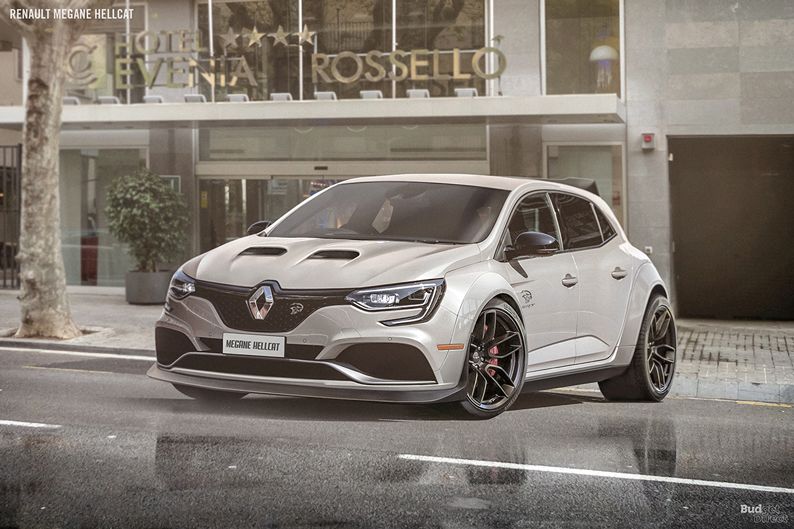 The first crossover collaboration question fans of sporty hot hatches everywhere would have been: What would happen if you crossed a Challenger Hellcat with the already pretty nifty Megane RS? The biggest change would obviously be under the hood, with a supercharged Hellcat 6.2L V8 leaving similar models to admire the new Megane Hellcat’s rear design changes rather than actually compete with it.

Of course, to keep this hot hatch from becoming a fire hatch some more Hellcat elements would need to be brought in, namely a double bonnet scoop air intake to cool down the furious V8. Other track-favouring features appropriated from the American classic would be the downforce-delivering lowered lip and broader nose, though the more aerodynamic curves of the original Megane keep it sleek and sporty rather than just making it look like a muscled-up French car on steroids. 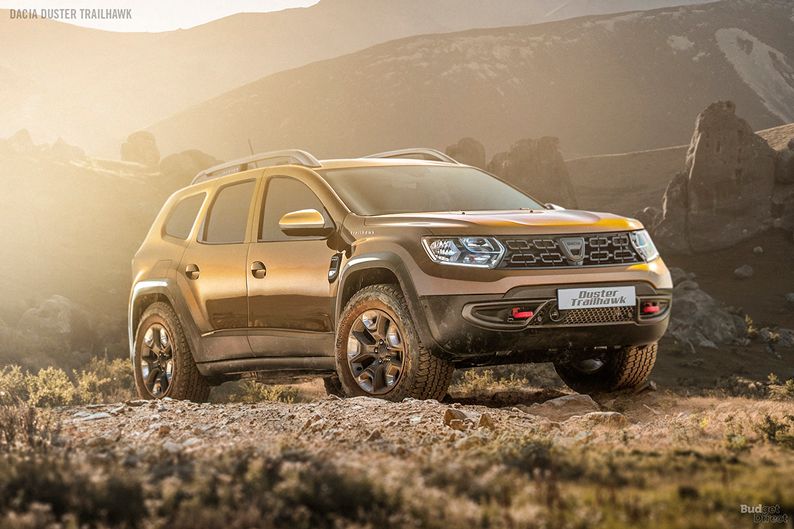 Trailhawk is Jeep’s trail-tested, off-road version that gets your standard SUV into the mood for going walkabout. For the Dacia Duster, a solid, if uninspiring mid-range family SUV, a Renault-FCA tie-up could have catapulted it into the outback with the suspension to handle the landing.

The new Duster Trailhawk would be lifted to get more ground clearance and have some proper off-road wheel flares covering P245 all-terrain tyres. Skid plates, quite unnecessary for rambling around suburbia, would also be added to give peace of mind for all the blows to the undercarriage an off-road experience throws up, while tow hooks let everyone know that this Duster means business, especially if that business is pulling lesser models out of trouble. 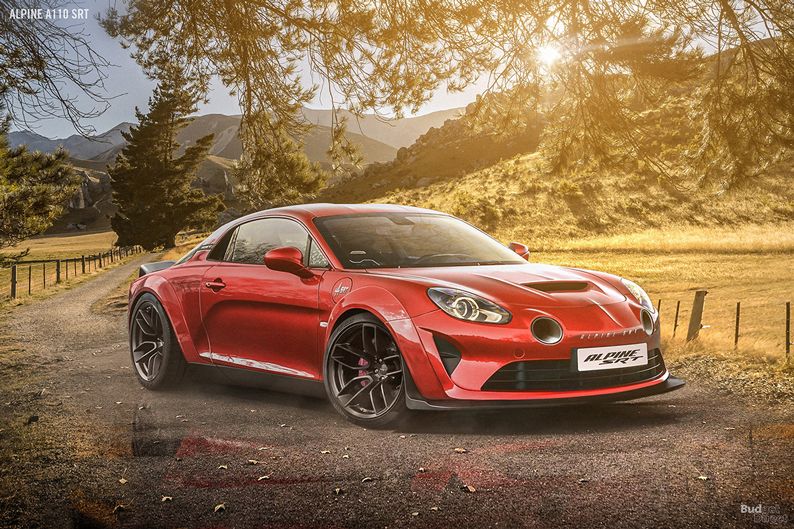 The Alpine A110 sports car, a 60s classic revived by Renault-Nissan, is already a serious machine and rival of the Porsches and Audis of its class. Something that could have pushed it into another stratosphere however is getting a tune up from Dodge’s Street & Racing Technology division.

It would get a meaner look with the flaring fenders from the Challenger SRT and the bonnet scoop from the Charger coming in, but to fit in the Viper’s supercharged V8 engine even greater innovation would be needed. We imagine the SRT team would more than rise to the challenge by integrating the fogs into the headlights and using that space as two extra air-cooling intakes. The Alpine was built little and light to challenge the big boys, but with Dodge’s powertrain and styling it could become quite a monster. 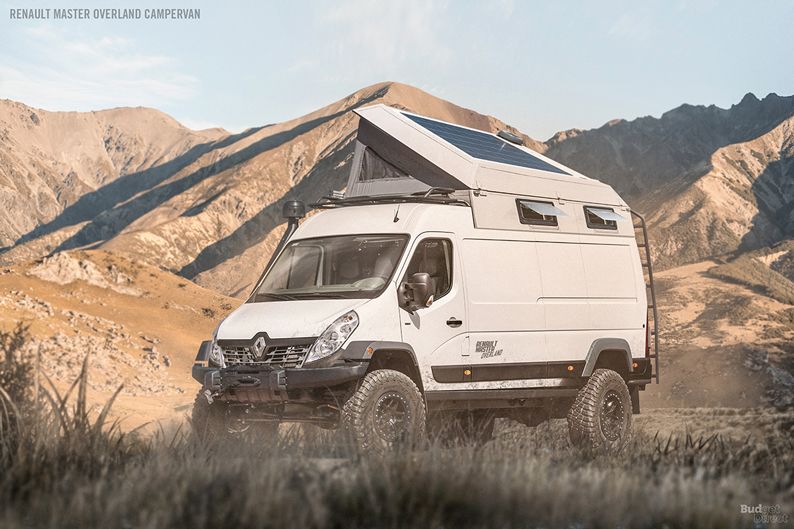 With the ruggedness of the Grand Cherokee Overland and Renault’s relative finesse, the merger could have been a perfect chance to pull off that very rare vehicle, a campervan that people would actually want to be seen in. Built on the base of the Renault Master, the Overland Campervan would take the Jeep’s off-roading tires along with its heavy-duty bull bar and towing winch, perfect for pulling stray mountains out of the way of an otherwise flat camping spot.

Of course, in today’s connected age the battery technology that Renault excels at would really come into play with adjustable tilt solar panels on the roof. The camping experience would also be full on with a bunk bed style ladder up to the pop-top upstairs bedroom which would be perfect for some stargazing before bed. One of the biggest synergies being promised by an FCA – Renault hook-up was working together on the electric vehicles of the future. With pressure coming from regulatory authorities, car companies need to come up with a big response, and there would be few bigger statements than turning one of the world’s most iconic gas-guzzling pickups, the Dodge Ram, electric.

Though some may consider it vehicular blasphemy, the battery technologies developed by the Renault-Nissan research labs, could be applied to fit the famous ram’s head with a bionic body over a combustion-fuelled one. There would have to be big changes to go Zero Emissions, with the hulking 6.2L V8 being out on the scrapheap for one, which means the Ram’s previously intimidating bonnet would be smoothed out noticeably.

Dropping a few inches and getting shorter at the nose, the new Ram could risk falling between two ideological stools, too small to outmuscle its American pickup competitors yet still too big for European streets. Well, at least any eco-friendly off-roaders out there will finally have a vehicle big enough to take them to the woods but quiet enough not to ruin anyone’s picnic. 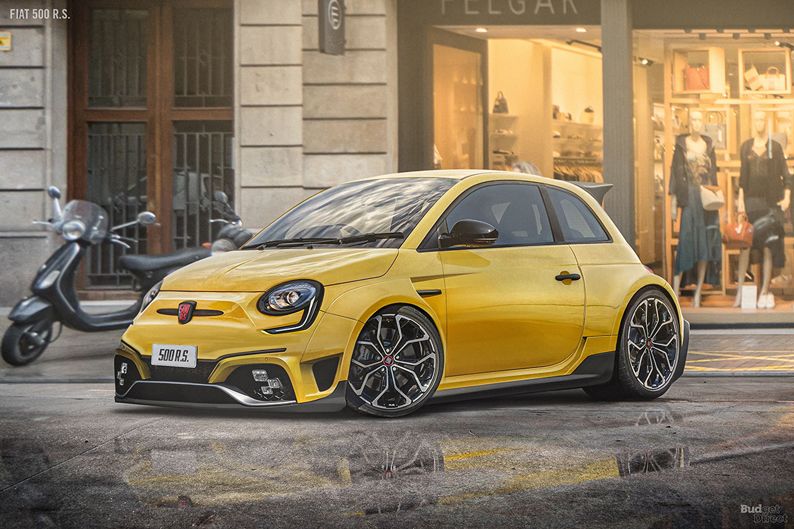 Another possible route to go for the Renault Sport-upgraded Megane would be a crossover with the Fiat 500, giving its Italian cousin a souped-up makeover. The chic little city-car would instantly become a neighbourhood-divider, a hero to the flash but frugal, and the scourge of light-sleepers.

The fenders would get stretched out, quite a necessity if they’re to fit anywhere near the RS’s top-spec 19” alloys. Though this also gives it plenty of space to go wild with its lighting layout, bringing in the ultra-sporty C-shaped headlights and lower DRLs (blue tints being a highly recommended option!). We imagine it would also take on the Renault’s classier rear-diffuser and spoiler, while the brash yellow is a must for making this once meek Fiat 500 into a menace. Where Renault could really do with some help is in building a sedan that people actually notice. We imagine handing its little-known Talisman over to the Dodge design team would have created something that sparked an automatic “Oh, that’s slick, what is it?” from passers-by. We figure they’d definitely do what they do best, making it a widebody in the mould of the Challenger Hellcat and giving it a beefier look with more muscular fenders to account for its new, wider wheels.

The whole front would get a meaner muscle-car look with the addition of a hood scoop. Though it’d be as much out of necessity as aesthetics as its newly fitted 6.2L HEMI SRT V8 would take a heck of a lot of cooling. Finally the Talisman might live up to its rather presumptuous name.

One of the most phenomenal SUVs ever created saw Chrysler take the 6.2L Dodge Hellcat V8 engine and stick it in a Jeep Grand Cherokee. This so-called “Trackhawk” treatment could supercharge the Renault Koleos and lift it from the middle-class misery of being a suburban tractor to having the track chops to outpace an Aston DBS or Audi RS5. The new, 707bhp, 2.5t Koleos would be going 0-60 in about 3.2 seconds and be capable of topping out at 180mph, which would certainly help when trying to trim a few minutes off the school run.

Visually, changes would also be made to let people know that the Koleos had gone to bootcamp and wasn’t going to be pushed around anymore. It would ditch the slender slopes of its front in favour of a brawnier brow with added cooling intakes, to give it the more appropriate look of a snorting bull. The wheel arches would also be stretched out to accommodate the 20” wheels, but at least they would hold onto the swisher C-shaped headlights to prevent it going all the way muscle. Renault’s Twingo looks very much how its name sounds (seemingly a mashup of twist, swing and tango), likely to get washed away if someone dropped a drink behind it and constantly being outpaced by inhabitants of the cycle lane. Which is exactly why it is in need of a makeover from Dodge’s legendary SRT design team.

The new SRT Twingo would be built for the drag strip, with a lower profile body and side skirt, as well as a bonnet scoop and a racy rear spoiler giving it the look of a feisty terrier who truly believes that size doesn’t matter. As a V8 engine would quite possibly turn the driver to jelly on such a small chassis, the Twingo would be mounted with the slimmer 3.5L V6 last seen in the 2010 Dodge Challenger. This Dodge Twingo would certainly have the looks and power to at least have a shot at selling in the States.

Unfortunately the merger of Renault and Fiat-Chrysler didn’t come off, seemingly due to differences between the French government and Johan Elkann, head of the Agnelli family who control Fiat. Still, this won’t stop us from letting our imaginations run wild, dreaming of what might have been cooked up had it all gone through. The mix of suave French styling, American muscle and a sprinkling of Italian flair could have created a line of cars ready to take over the world. For now though, we’ll have to make due with these very pretty pictures.