Modern crossovers and mid-sized SUVs are most likely riding atop of an existing sedan platform, and that’s how it’s been since the SUV craze started in the mid-90s. Of course, we’re not referring to truck-based utes and large SUVs based on a dedicated ladder frame chassis, but you get the point.

We started daydreaming, what would it look like if we re-designed the most popular SUVs as sedans, and then we went ahead and actually did it. We didn’t take the easy route, either. We only included particular SUVs that didn’t resemble their four-door sedan siblings. For example, we resisted the urge to create an Audi Q7 sedan because it already exists in the form of, well, any other Audi sedan in the market today.

We chose the most unique-looking SUVs of the modern era and reinterpreted each one as a four-door family sedan. Are you ready? Here are 7 SUVs reimagined as sedans. 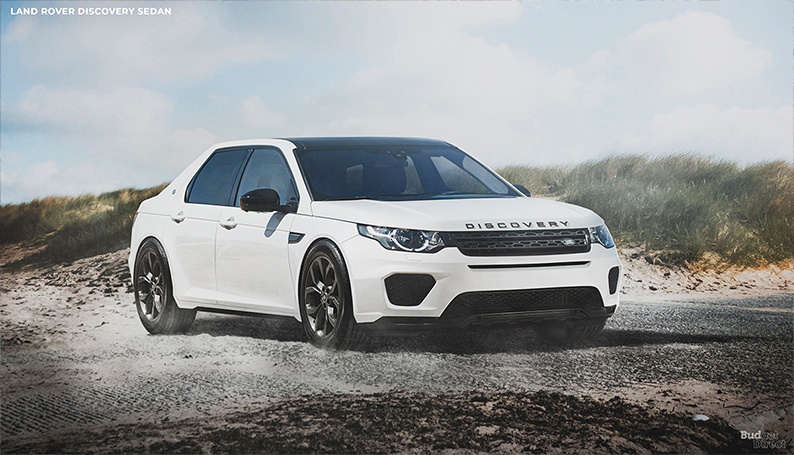 We could have chosen the all-new Land Rover Defender, but where’s the fun in that? And besides, Land Rover is marketing the Defender as a new-age adventure vehicle (a.k.a. an aluminized body-on-frame mountain goat) while the new Discovery is an SUV for the street. It can still do the off-road thing, but it offers balanced capabilities in both on and off-road performance.

So, we created a Land Rover Discovery Sport sedan. The adventure DNA is still present with recognizable headlights and a standard front grille, but the front bumper is shortened to give it the proportions of a sedan. Also, the roofline is a direct ode to the Discovery SUV, although the boxier rear proportion means expansive room for both rear passengers and cargo. 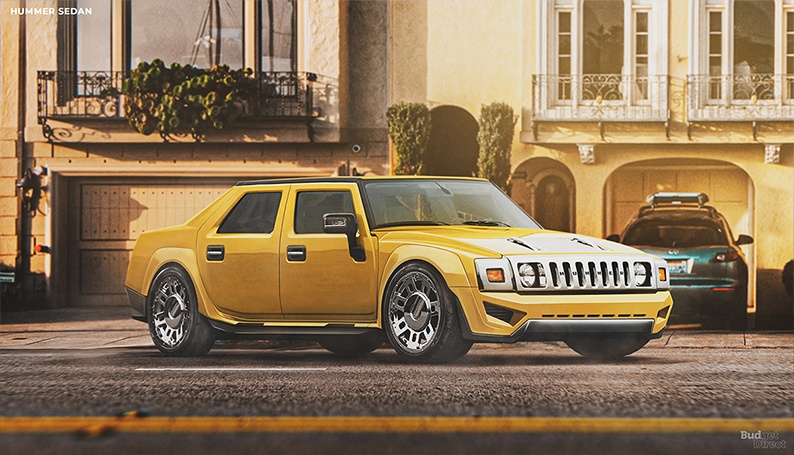 How do you create a Hummer sedan? Easy. You start with a Hummer H2 and chop off the pillars to create a lower roofline. Next, it’s better to tone down the wheel arches to give it a more dignified aura. And of course, lower the ride height and presto! What you’re seeing now is our imaginary Hummer sedan.

It still sports the shiny Hummer front grille and round headlights in a square frame. The large wheels have the same chrome finish as the grille, making this sedan a proper bling machine. The angular front bumper was also redesigned to give it the flowing lines of a sedan. We retained the large wing mirrors mounted on the doors to give it the unmistakable appeal of a Hummer. 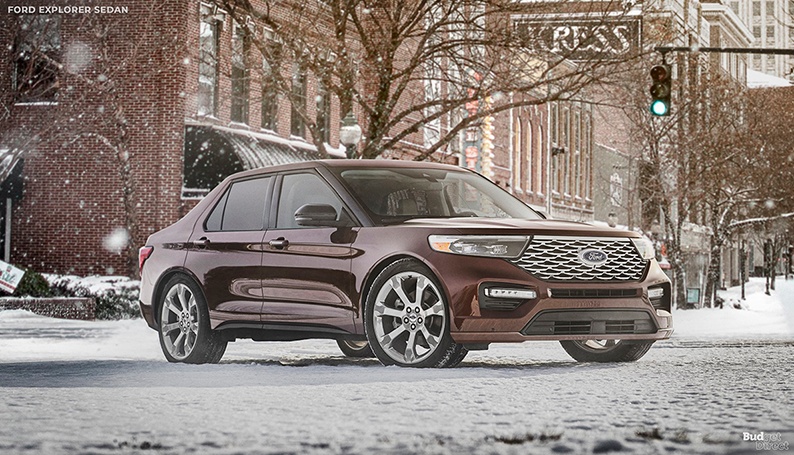 Is it a Ford Explorer sedan, or is it a reincarnation of the now-defunct Taurus? We admit the Explorer sedan ended up looking like a crossover-inspired Taurus, albeit with a more rugged appeal. The massive front grille and large headlights were lifted directly from the Explorer SUV. However, the shorter front bumper is complemented with a new lower front lip like a proper sports sedan.

It has a slightly upright greenhouse with larger windows and a low beltline like in a ‘90s sedan. The large wheels are also lifted from the Explorer SUV. Apparently, the shiny wheels and lower profile tires were enough to fill in the wheel arches, giving our Explorer sedan a sportier vibe. 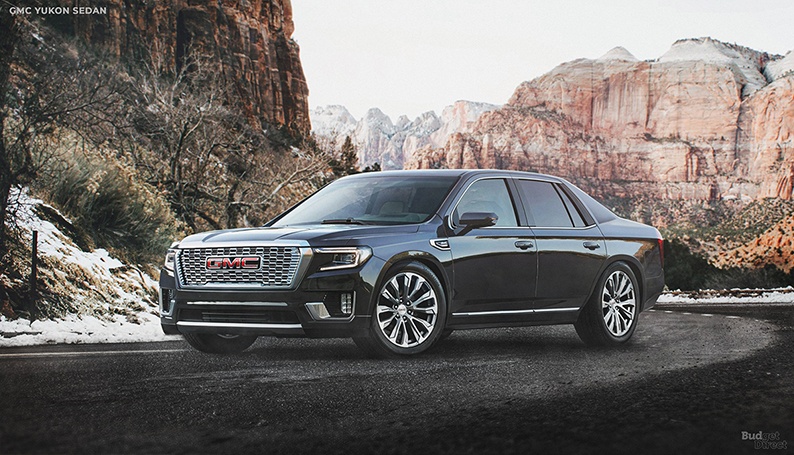 The GMC Yukon is a prime-and-proper family SUV. It has the right levels of toughness and luxury, and the same holds true for your GMC Yukon sedan. Right off the bat, this sedan means serious business. The familiar GMC Yukon grille and headlight design are present, albeit toned down to match the proportions of a full-size luxury sedan. And yes, it has the aura of a Chrysler 300 C, but the boxy pillars and curved roof is very much original.

Our GMC Yukon sedan exudes a strong sense of solidity. It has a long and sculpted hood, a long wheelbase, and a shorter front overhang – all the qualities of a Rolls-Royce. It looks as robust as an SUV and yet as stately as a proper limousine. 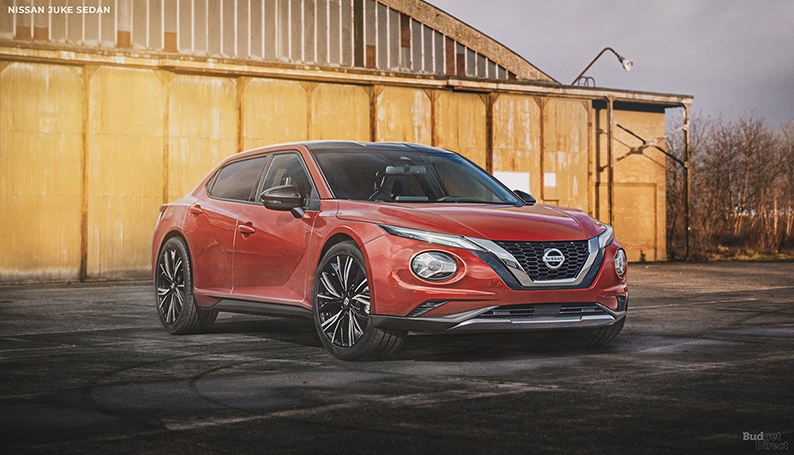 Depending on your point of view, the Nissan Juke is either funky and super stylish, or just a bit weird and googly. Whist its design might not be pleasing to everyone, we think most would agree it translates well in sedan clothing. Nissan’s trademarked V-motion grille dominates the front, but the biggest eye-catchers are the LED indicators and large headlights on the front bumper.

There’s no mistaking the Juke sedan for anything other than a Nissan. But from the A-pillar and back, it’s pretty much a Juke with a wagon-like rear end. Dare we say this Juke sedan looks good enough for production? Attention Nissan, here’s your next car. 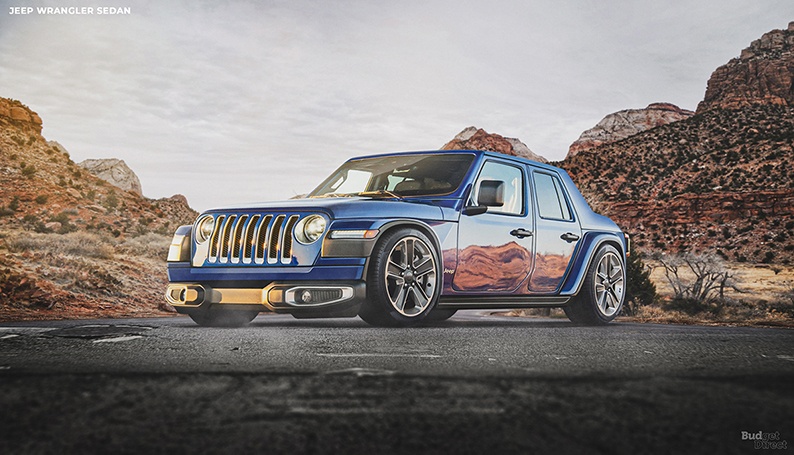 Whoa there, is that a hot rod or a lowered dune buggy with four doors? Whatever the case, we know now what a Jeep Wrangler sedan would look like, and it’s awesome. The first order of the day was to round up those fenders for a sleeker look. The flat Wrangler doors are retained along with the iconic vertical grille and round headlamps, but we angled the windshield to give the vehicle a lower roof.

And despite having a sloping windshield and lowered roof, the roofline is straight as an arrow and dramatically slopes downward to form the boxy rear end of the vehicle. With a slammed-down look and rugged vibe, this Jeep Wrangler sedan is ready to rock the streets. 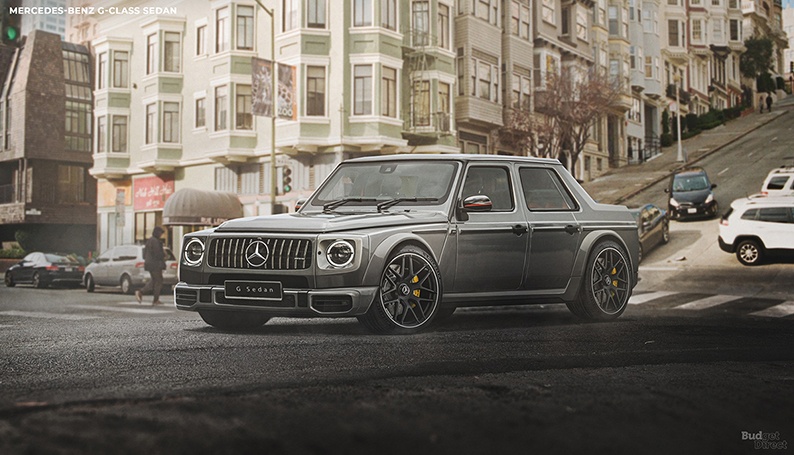 The Mercedes-Benz G-Class is a modern SUV with a retro body style. The G-Class (or more popularly known as the G wagon) is also oozing with power and sophistication. However, the G-Class sedan ended up being the boxiest of the lot, but it doesn’t mean it’s less desirable in sedan form.

The powerful hood, aggressive Panamericana grille, and classic G-wagon headlights are there. And instead of creating an entirely new front bumper, the G sedan makes do with a Lilliputian version of the G-Wagon’s bumper. The AMG wheels fit well under those resculpted wheel arches. In fact, our Mercedes-Benz G sedan could serve as the blueprint for an AMG pickup truck, doesn’t it? All it needs now is a growling turbocharged V8 motor.

As we went on to create renderings of 7 SUVs reimagined as sedans, we immediately found out the task of creating a sedan from an SUV is not an easy one. And while some of the designs are not feasible from a production perspective, you have to admit each vehicle is unlike any sedan you‘re likely to see on the road today. Which one is your favorite?