We miss ogling at concept vehicles during car shows. For some manufacturers, concept cars are mere flights of fancy. But for the most part, futuristic concept vehicles symbolise the future design direction of a particular brand.  And in most cases, concept vehicles are essentially pre-production versions of the cars we see on the road.

Since we’re longing to feel the excitement and adrenaline rush of previewing a concept vehicle for the first time, we took seven longstanding nameplates from famous carmakers. Next, our creative juices took over as we previewed what those seven cars will look like thirty years from now – particularly in 2050.

Here’s what we came up with.

This was a tough one. The current C8 Chevy Corvette is an all-new model. It’s also the first Corvette to have a mid-mounted engine. Hence, our Corvette concept is based on the general evolution of America’s homegrown supercar. But since we’re talking about the future, our 2050 Corvette is purposely designed to accommodate two or four electric motors and a long-range battery pack.

Yes, our Corvette concept is an all-electric model. This gave us greater reign in conceptualizing a futuristic, low slung body style. We retained the mid-engine architecture while including some large air vents on the rear flanks. But instead of feeding air to a massive V8 engine, those air vents are responsible for cooling the high-output rear electric motors and battery pack. 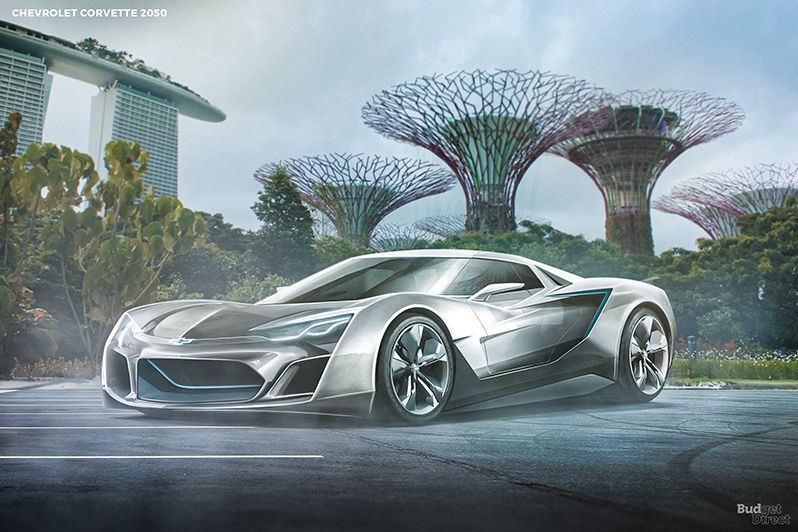 At the front, we gave the electric Corvette a snazzy pair of headlights and large air intakes to provide some much needed cooling air to the front electric motors. The overall structure is sharper and lower than the C8 Corvette, and it also has a wraparound windshield design like in a Koenigsegg.

Like the Honda Civic, the Toyota Corolla is a perennial bestseller in the compact sedan category. And while the current tenth-gen Corolla is gifted with a more athletic stance, Toyota’s car of the future is the Concept-i with scissor front doors and reverse scissor rear doors. We took the Concept-i and reimagined it for the year 2050. The result is our Corolla concept car. 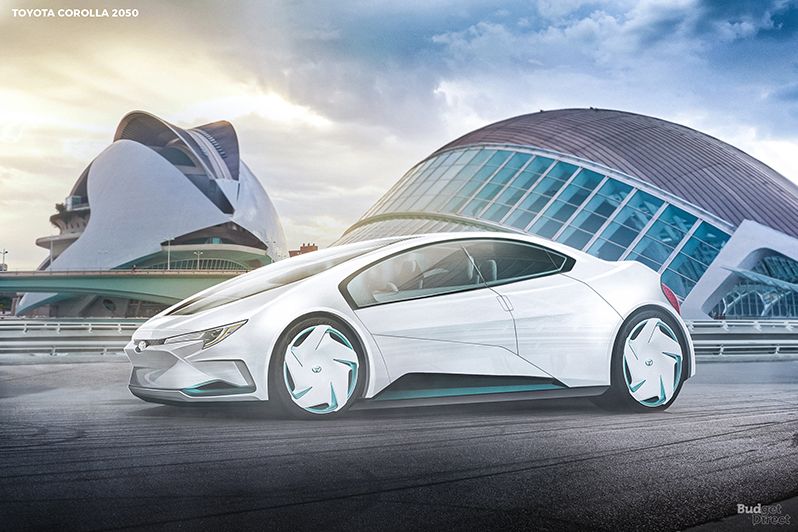 Yes, our Corolla concept is an all-electric model. This allowed us to give it a unique cab-forward design with a low and pointed front end along with a rising beltline. It has a massive, forward-pointing greenhouse that stretches towards the roof near the B-pillars. We also borrowed the wheels of the original Concept-i to complete the futuristic vibe.

We’ve all seen renderings of a mid-engine Ford Mustang, but we did something better. We took inspiration from the front clip of an all-electric Mustang Mach E crossover and gave it a genuine fastback silhouette with two proper doors and a muscular stance. And yes, our Mustang concept is an all-electric model like the new Mach E. 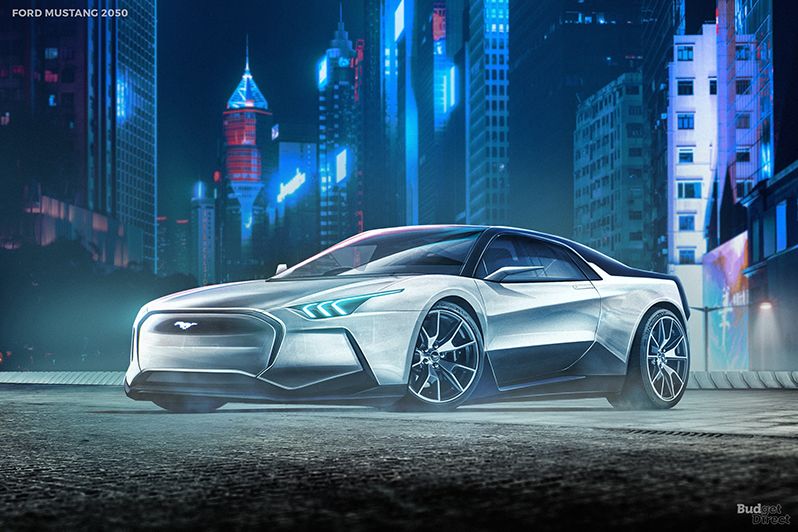 But unlike the current-gen Mustang S550, our electric pony car has sharper lines and a shorter hood. It also has pointed side mirrors and a floating roof design courtesy of blacked-out A-pillars and C-pillars. If we’ll have our way, this Mustang concept will have twin rear-mounted electric motors to deliver a genuine rear-drive sensation, although we’re not discounting the possibility of a four-motor muscle car.

The Jaguar XJ is an excellent luxury car. It has the space, pace, and grace of a true Jaguar. However, Jaguar made it clear the next-gen XJ is an all-electric model and will be the second all-electric production Jag after the award-winning I-PACE electric crossover.

However, we shied away from the I-PACE’s rounded silhouette. Instead, we went for sharper lines, broader shoulders, an angular windshield, and a ridiculously sloping roofline for more athleticism. Most noticeable are the angular front fenders, slimmer headlights, a radical front bumper (which gives the impression of a floating front grille), and a transparent rear diffuser panel. 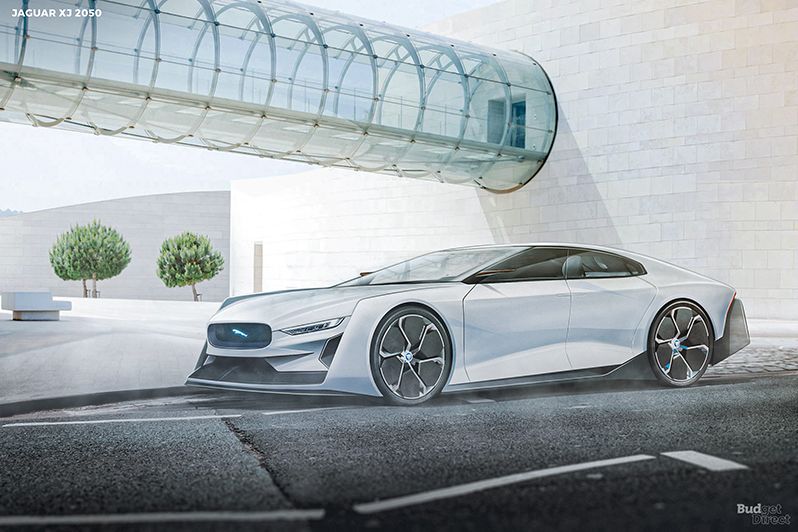 We also gave our Jaguar XJ concept a nice set of suicide rear doors and massive alloy wheels wrapped in low-profile high-performance tires. Our XJ concept wouldn’t look out of place on a racetrack, but it remains a proper sport-luxury saloon with its longish wheelbase and short overhangs.

The Mercedes-Benz SL is dead – or so we thought. Apparently, Mercedes is working on the next-gen SL-Class, which is slated to arrive in early or mid-2021. The new SL will ride on a platform shared with the Mercedes-AMG GT sports car. It’s essentially a return to form, so to speak, as the SL moniker stands for ‘Sport Leicht’ or Super Light.

For our Mercedes-Benz SL concept, we took inspiration from previous concepts like the Silver Arrow and AMG Vision Gran Turismo. Our futuristic Mercedes SL has oversized wheels, a large Panamericana front grille mounted lower to the ground, slim headlights like in the Vision GT concept, and those iconic three air vents on the side.

And since we’re still referring to a proper Mercedes-Benz SL, our concept has a long hood, a cab-back design with smoother lines and rounded corners, and a folding hardtop roof. Again, the blacked-out rocker panels are pointing to a massive battery pack on the floor.

The original two-door Mini is an icon. When BMW debuted the new Mini in 2001, purists were quick to point out the new model is not a genuine Mini. It looks like a Mini and it drives like a Mini in one way or another, but it’s way too big and way too complicated to be considered a proper mini car.

With that in mind, we gave our Mini Cooper concept a smaller footprint than the current model. We also gave it an almost non-existent A-pillar design with a vertically-oriented windshield and large side windows to improve visibility. And since our Mini concept is all-electric, this gave us the freedom to install a massive blank front grille with an embossed Union Jack flag. 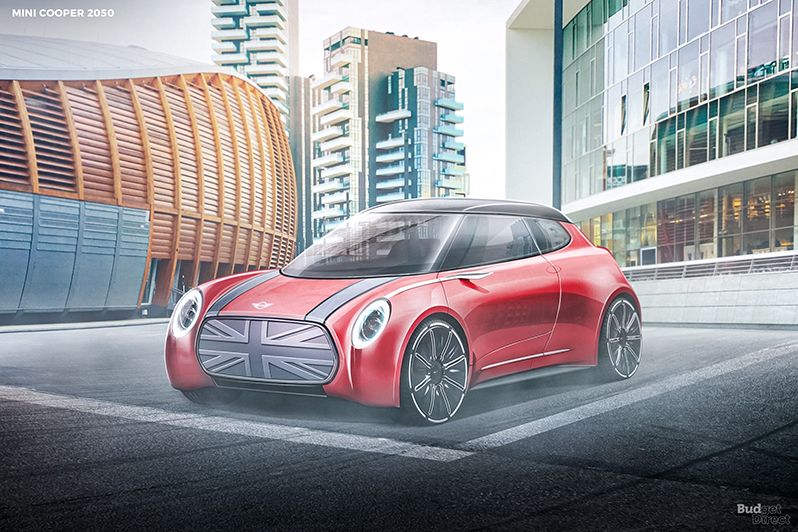 Despite the booming popularity of crossovers and SUVs, the automotive landscape will always have a place for new-age compact cars like the Honda Civic. For our Civic concept, we took Honda’s Gundam-robot styling idiom and took it to a different level. For starters, it has wraparound front fenders that literally frame the hood and the entire front end of the car. It also has broader shoulders and a hatchback rear design lifted from the Honda CRZ. 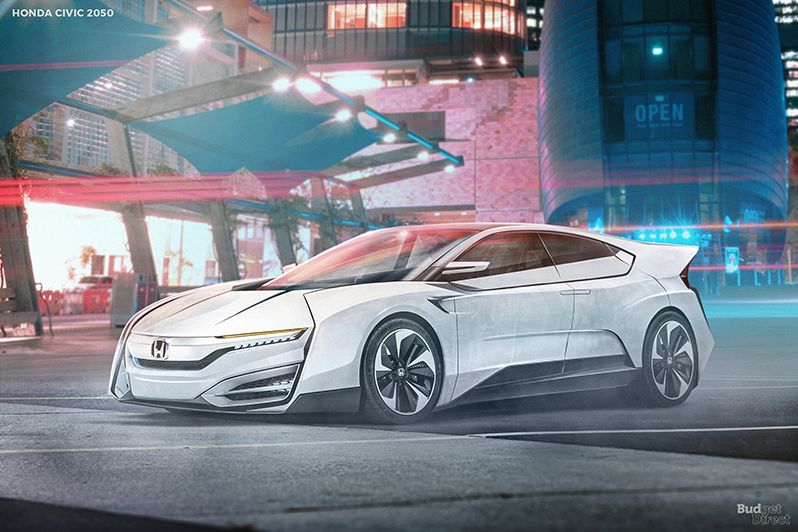 Our Honda Civic concept has cleaner lines than the current model. It’s also lower, sleeker, and has a more angular windshield for better aerodynamics. Did you notice the blacked-out rocker panels? It connotes the location of our Civic concept’s battery pack, which is mounted lower to improve its center of gravity.

Futuristic car concepts often range from the out-of-this-world to the downright ridiculous. But they need to be like this to help push the industry forward. Concept cars are not meant to be proven successes with small iterations, they need to be big, bold leaps forward that inspire.

Japan travel guide: 19 things you should know before travelling to Japan