People can get very attached to their belongings, especially to belongings that they have invested in financially, or belongings that serve a very useful function. The practice of giving human characteristics to nonhuman objects is so common in fact there’s even a term for it; anthropomorphism. And giving belongings names is one of the most popular forms of this.

A new survey by Budget Direct Car Insurance has found that 30% of Australians have named their cars.

And cars are certainly an object that serve a useful function and they’re likely to be used for a number of years. It’s easy to assign personality traits to objects that you use on a daily basis and might have their own quirks or ways of working. Like that old back window that needs a little help winding back up, or if your brakes are a little finicky after you’ve been on the road for a few hours.

You also take care of your car. You make sure it’s fed when it’s empty, cleaned when it’s dirty and (hopefully) service it regularly to make sure it stays healthy. You even take out insurance to protect it in the event of an accident. After investing so much into your vehicle, it makes sense to name it, as an acknowledgement of the bond you share and the time and money you’ve spent.

Naming your car is such a popular practice these days there are even websites dedicated to car name generators, where you can answer a series of questions about your car and your motoring likes and dislikes to help you hone in on the best name. There’s even a day of the year dedicated to the practise, October 2nd is national Name Your Car Day.

When looking at the data, there wasn’t too great of a difference between men and women’s naming preferences. Women were only slightly more likely than men to name their vehicles at 32.8% compared to the 26.4% of men that indulged in this anthropomorphic behaviour.

This could indicate that women were more likely to form an emotional connection to their vehicles, or perhaps were looking to build trust in their cars. A study conducted in 2014 published in the Journal of Experimental Social Psychology found that the act of naming a car leads to an increase of trust in the vehicle(1).

There also seems to be a distinct preference for bestowing cars with female names as opposed to male or gender neutral ones. Historically this seems to be part of a larger trend of naming things after women, such as storms, ships and boats. Although the most popular name in Australia, The Beast, is gender neutral and very versatile.

Some of the more popular nicknames were 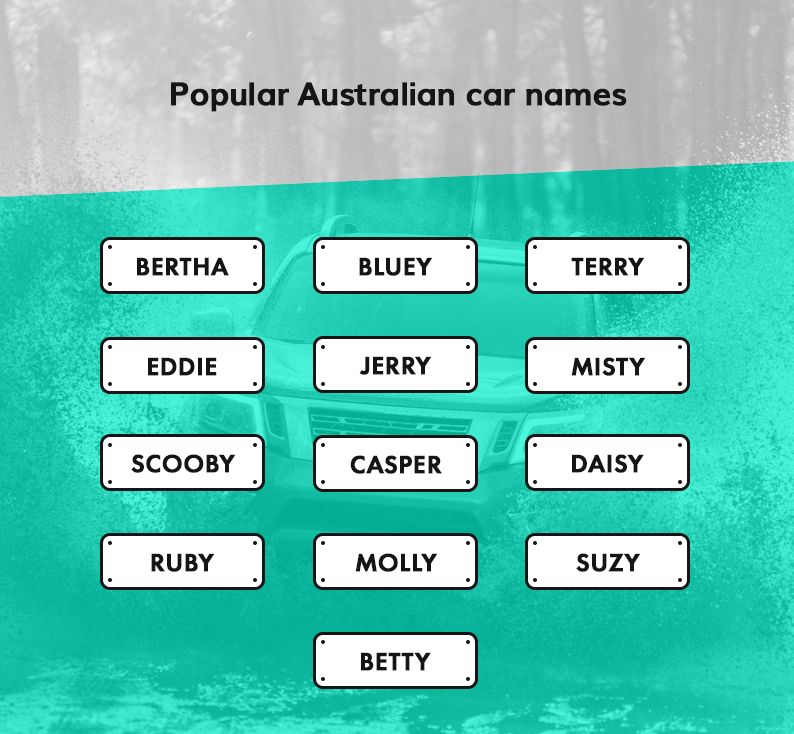 It was the younger generations leading the way with naming cars, with nearly half, 47.2%, of 18-24 year olds gracing their vehicles with names and a close 45.5% of 25-34 year olds following suit.

Australians aged 65 and over were the least inclined to name their vehicles at only 11.1%, which could indicate that the trend of naming cars is becoming more common and that people are feeling more and more connected to their vehicles. 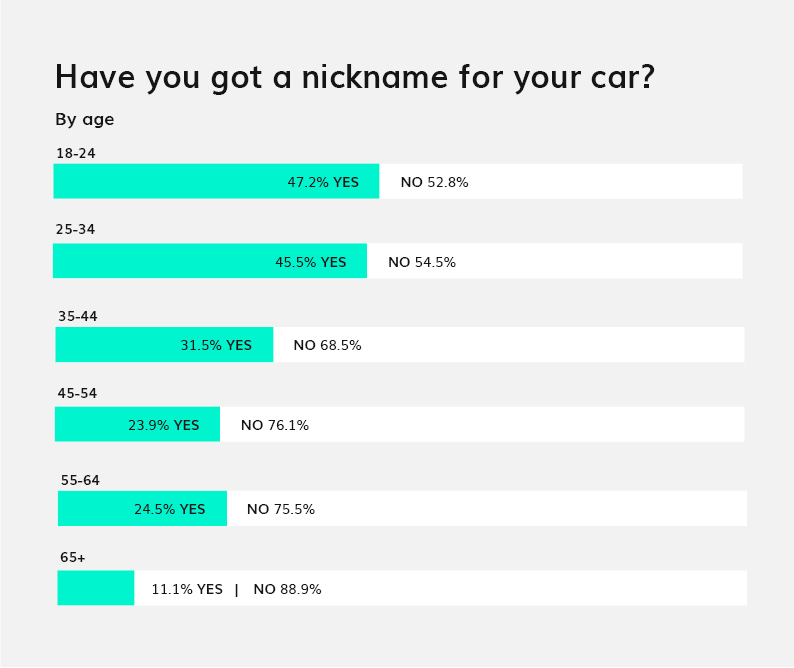 But there’s also the darker theory that people who name their cars are more lonely than those who don’t(2). Several studies suggest that people who lack social connections with other humans seek to compensate by creating connections with nonhuman agents, including naming them. Whether you subscribe to this theory or not, it is undeniable the cars can seem to have personalities of their own. None more so than ones who are given particular names that stand out from the rest.

While these names might not be winning the popularity contest, they certainly won points on uniqueness and creativity. 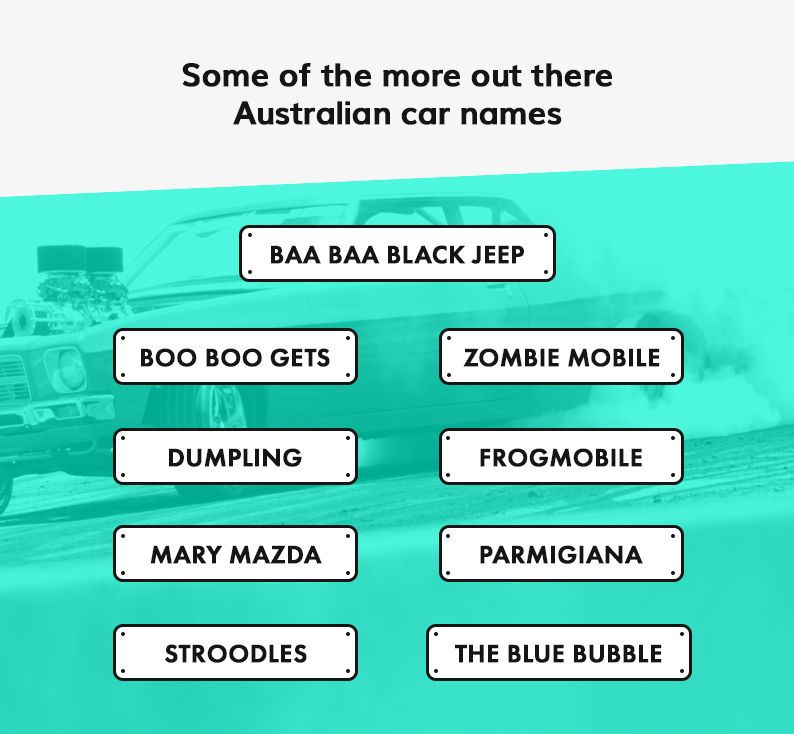 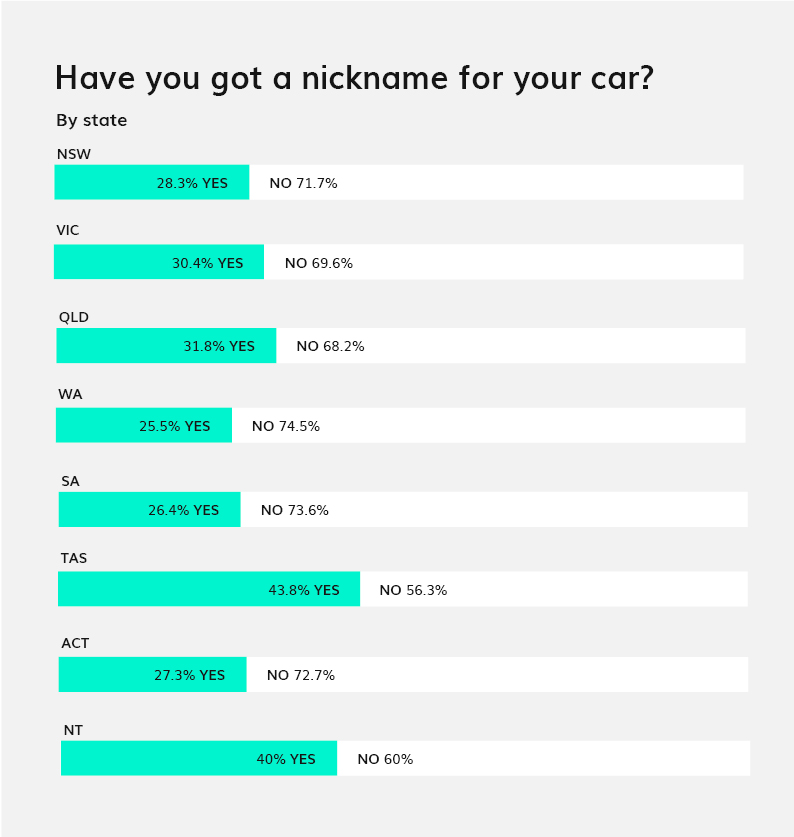 So if you are looking to name your car but don’t know where to get started, check out our article on tips for naming your car.

Progress in your personal finances this International Women’s Day

Simple Spring Cleaning Ideas That Can Transform Your Home

Where Should I Travel Next?