It’s been less than 250 years since the First Fleet of 1,485 settlers first arrived in New South Wales on January 26, 1788 — a date we now celebrate annually as Australia Day.

In that relatively short time, Sydney has developed into one of the world’s largest, most cosmopolitan cities, with a population of over 5 million and a unique mix of Aboriginal, British, Asian, and European cultural influences.

To gain a better understanding of how Sydney became the modern metropolis it is today, we’ve analysed dozens of maps of Sydney from the National Library of Australia and other sources from the years 1770 to 2020.

We identified important buildings and infrastructural developments in the city’s history using information from the Office of Environment & Heritage of the Government of New South Wales, Sydney history and travel guides, and other sources, and identified maps that best reflect those changes.

We then designed our own maps combining information and features from the historical maps. These maps formed the basis of the animation below that traces the most important developments in the city’s history.

In its relatively short history, Sydney experienced near starvation, rebellion attempts, a gold rush, trade booms, the Great Depression, two world wars, and hosted the Summer Olympics. These maps depict the major infrastructural, architectural, and demographic developments that resulted from these dynamic periods in Sydney’s rich history and more. Additionally, some of the older maps displayed here were chosen for their historical significance and the important role they played in the early settlement of the city.

When Captain James Cook and the HMS Endeavour set off for the east coast of the Australian continent in 1768, little was known about the land that would become New South Wales. Until then, European knowledge of the existence of Terra Australis Incognita — or “unknown southern land” — was largely based on the theory that the great landmasses of the northern hemisphere must be balanced out by equally large landmasses in the southern hemisphere. Cook and his crew made landfall at Botany Bay on April 29, 1770, which he named “Sting-Ray Bay” at the time due to the presence of stingrays. Upon the return of Cook’s surveying expedition, the British government would decide to establish a penal colony at Botany Bay. 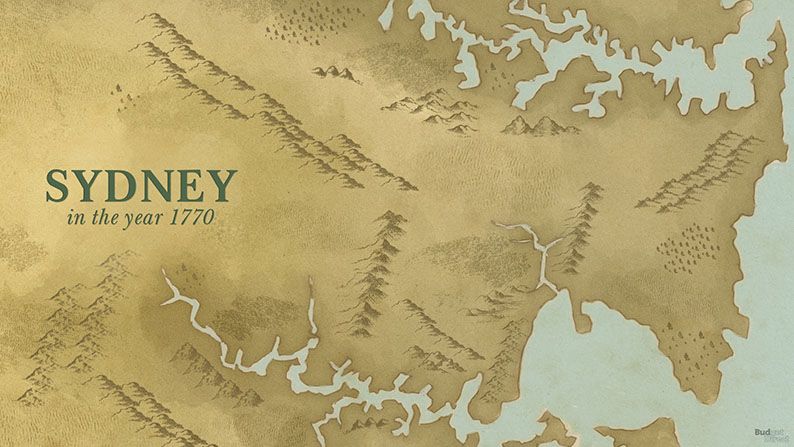 Shortly after landing at Botany Bay on January 20, 1788, the First Fleet, led by Captain Arthur Phillps, decided that a site a few miles to the north — Port Jackson, described as “the finest and most extensive harbour in the Universe” by one crewmember — was much more suitable for settlement. This map, drawn some three months after the First Fleet shifted anchorage to Sydney Cove in Port Jackson, shows a penal colony in the making. There are men’s prison camps, women’s prison camps, a governor’s mansion, and a farm, as well as the 11 ships of the First Fleet, which departed the bay 1789. 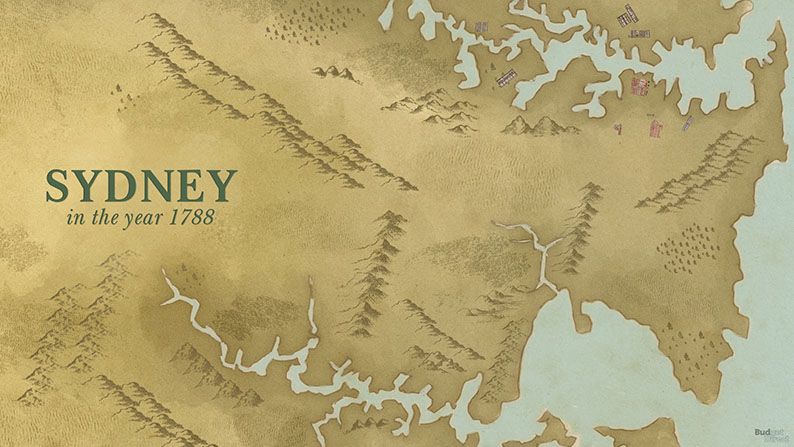 3. A topographical plan of the settlements of New South Wales – 1799

This map was made by legendary surveyors and explorers Charles Grimes and Matthew Flinders to showcase the progress of exploration and inland expansion in Sydney since 1788. The map shows civilian settlements in the modern-day suburbs of Concord, Ryde, Gladesville, Lane Cove, and substantial development in Parramatta, which was initially the preferred settlement due to its fertile terrain and which in 1792 had 1,970 inhabitants to Sydney’s 1,170. Construction on a house for the Governor was completed in Parramatta in 1799, which is today the oldest surviving public building in Australia. 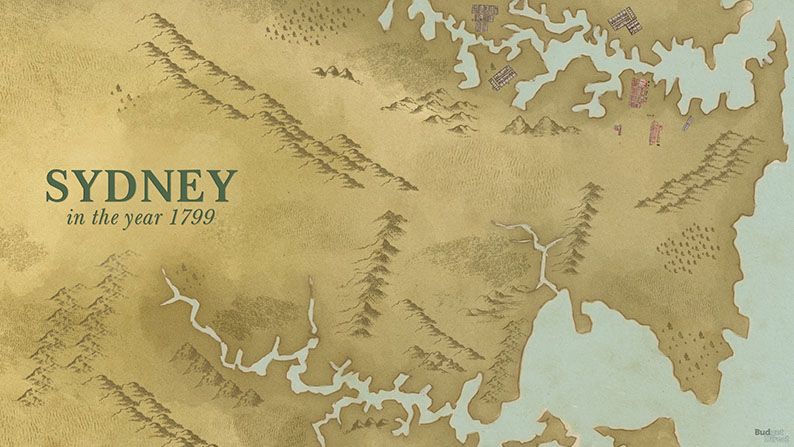 This map was drawn by Charles Alexandre Lesueur during the Voyage de découvertes aux terres Australes, a French scientific expedition whose purpose was to observe the geography and natural history of New South Wales and — according to some — to gather intelligence on the nascent British settlement. The French expedition saw the early penal colony at a time of hardship and ruggedness, where convict labour was used to establish roads and construct buildings and the entire settlement was governed by strict military rule. This map shows gallows where the modern suburb of Glebe is located, as well as a prison, officers’ lodgings, and Parramatta Road, which today aligns with the M4 motorway. 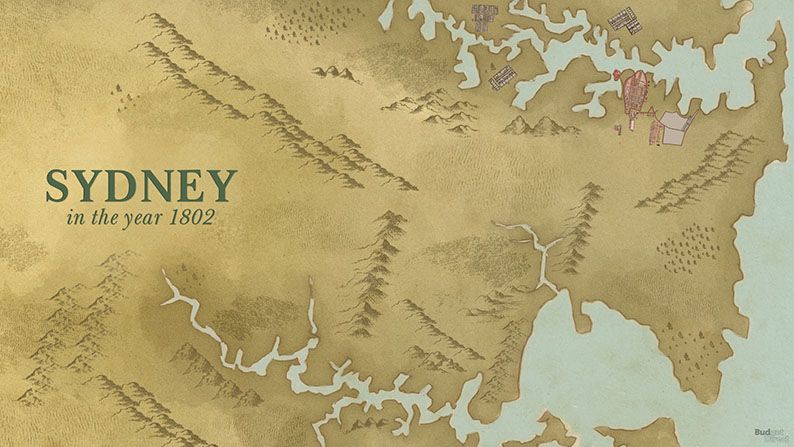 Due in no small part to the pioneering reforms of Lachlan Macquarie, Governor of New South Wales from 1810 to 1821, by 1822 the transformation of Sydney from a penal colony into a fully fledged city was well underway. Under Macquarie’s direction, civic institutions and landmarks such as the Court House — today the Greenway Wing of the Supreme Court of New South Wales — and the Royal Botanic Garden were constructed. Macquarie also extended the road system and gave many of the streets in Sydney’s central grid their present names.

In 1851, gold was discovered near Bathurst, west of the Blue Mountains, sparking one of the largest gold rushes in history. This map documents many of the changes that resulted from the gold rush and its consequent population boom. The Australian Gas Light Company, located at the Kent Street and Gas Lane, was responsible for first bringing a grid of gas street lights to Sydney in 1841. Other major developments around this period include the founding of the University of Sydney in 1850, the opening of the Australian Museum at its current site in 1857, the construction of the first Pyrmont Bridge in 1858, and the establishment in 1848 of the Garrison Ground — today the site of the Sydney Cricket Ground. 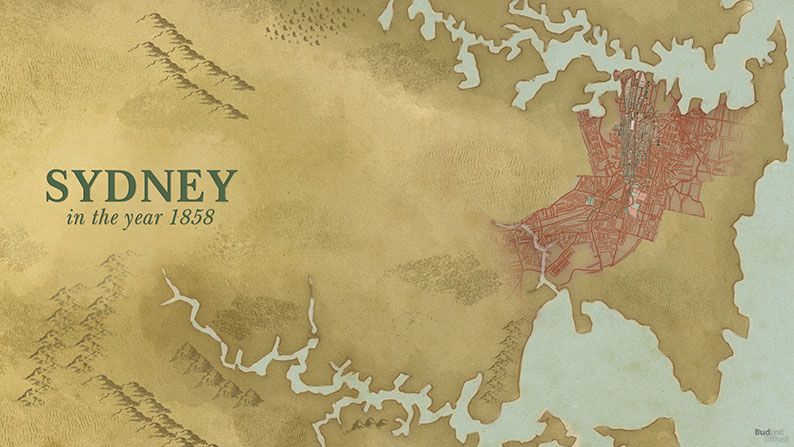 This map was published as a supplement to the Sydney Mail magazine to show the growth and development of Sydney from 1802 to 1873. It depicts the major population growth and increasing population density that occurred in the wake of the discovery of gold in New South Wales in the 1850s. Other major developments that took place in Sydney in that period include the Sydney Grammar School, founded by a special Act of Parliament in 1854, the Sydney Observatory, opened in 1858, and the construction of Cowper Wharf in the early 1870s. 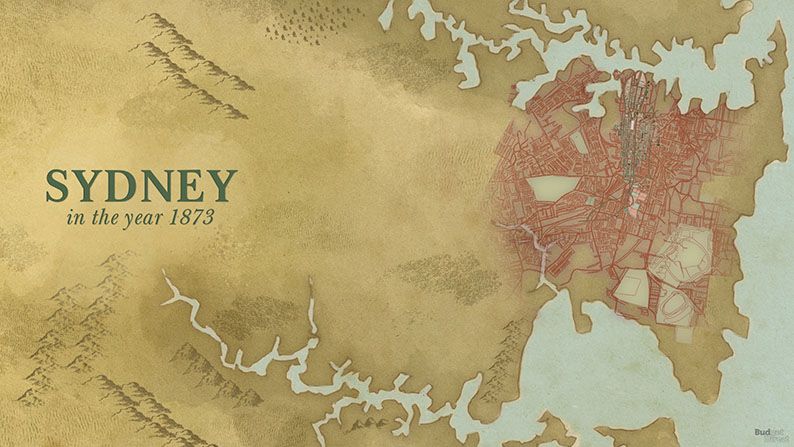 Sydney’s first steam tram was introduced in 1879 and ran along Elizabeth Street from Hunter Street to Central Railway. This map depicts Sydney’s early tram system, which at one point was the most extensive tram system of any city in the British Empire other than London. Other important buildings and infrastructure introduced around this time include the Strand Arcade, opened in 1892, as well as the Suburban, Great Western, Great Southern, Great Northern Railways. 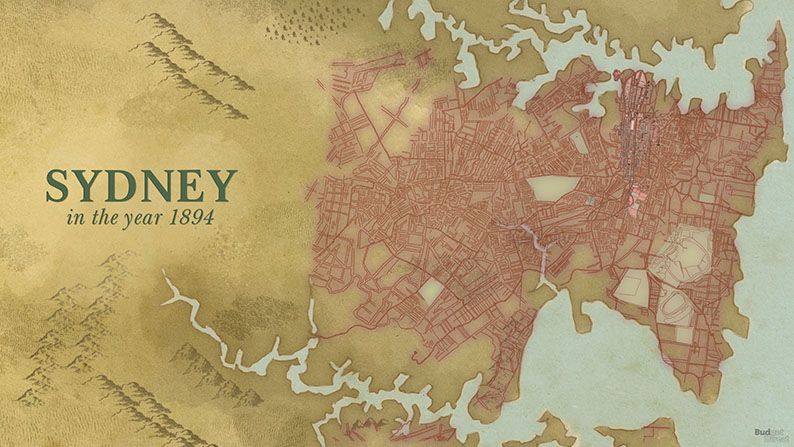 By the early 1930s, the major market economies of the world were in the midst of the Great Depression. Despite the hard economic times — unemployment peaked at 32% in Australia in 1932 — Sydney was able to construct some of its greatest public works in the period between the two world wars. The first portion of what would become the Pacific Highway route between Sydney and Newcastle opened in 1930, followed by the Sydney Harbour Bridge in 1932. Other major buildings and public works built between 1894 and 1934 include the Queen Victoria Building, opened in 1898, the 14-storey Culwalla Chambers — the first high-rise in the city — in 1912, and Taronga Zoo, in 1916. 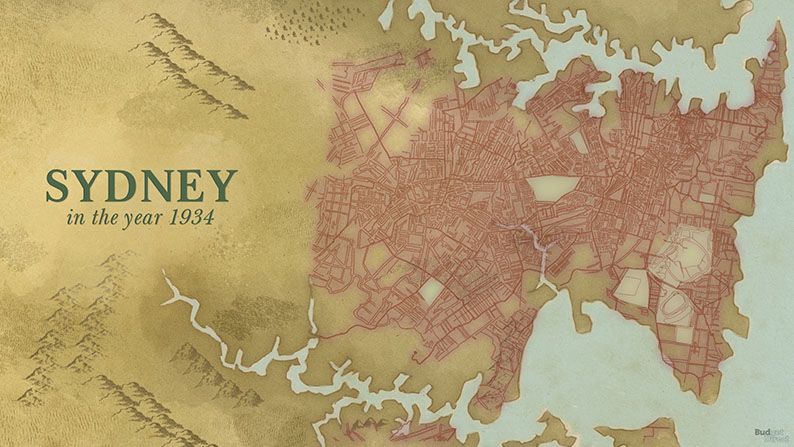 In 1948, the Cumberland County Council developed a planning scheme meant to act as a framework for the rapid growth Sydney was to experience in the wake of World War II. The resultant plan and map made provisions for a green belt and radial expressway network around Greater Sydney and is reflective of a city on the verge of major change. The map depicts increasing urbanisation as well as the development of Sydney’s road and rail network. Other important features originating in this period include Luna Park, opened in 1935, and the AWA Building, completed in 1939. 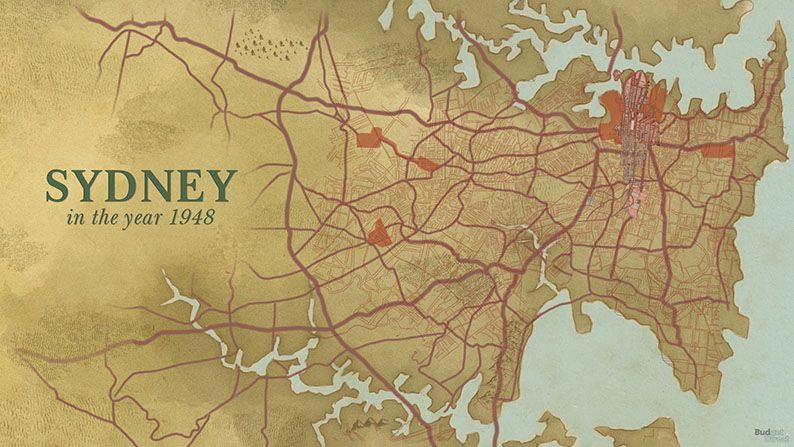 On the 200th anniversary of the landing of the First Fleet, the Government of New South Wales released its new metropolitan planning scheme for Sydney. The plan, titled “Sydney Into Its Third Century,” meant to accommodate for the city’s growing population — 1.7 million residents in 1950 to 3.4 million in 1985 — and encouraged job and housing growth in the outer suburbs of Greater Sydney. It also depicts the development of important roads and railways, such as Cahill Expressway, opened in 1958, and the Eastern Suburbs Railway, in 1979. Other landmark developments built between 1948 and 1988 include Westfield Sydney, opened in 1972, and the Sydney Opera House, in 1973. 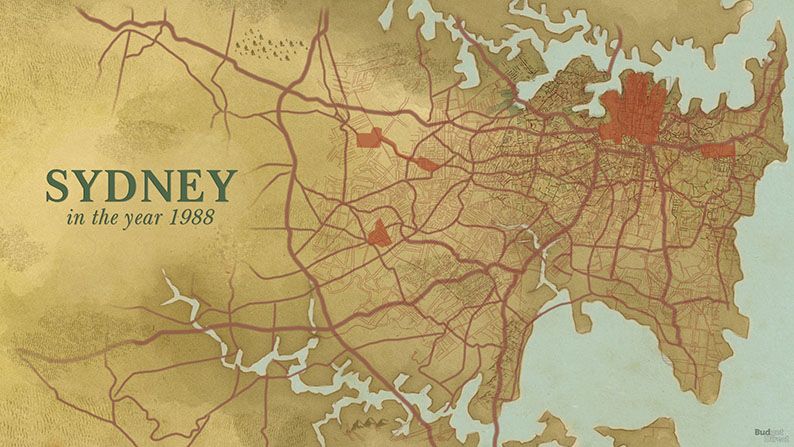 In summer 2000, Sydney hosted the Millennium Olympic Games. To facilitate the complex logistics challenge of hosting the Olympics, the Transportation Management Centre of New South Wales created 16 Olympic day maps for internal use using GIS technology. The maps show the major infrastructural impact the Games had on Sydney, as well as other significant developments over the last dozen years. Important features constructed between 1988 and 2000 include the Sydney Harbour Tunnel, opened in 1992, Chifley Tower, in 1992, Governor Philip Tower, in 1993, and the M2 Hills motorway, in 1997. 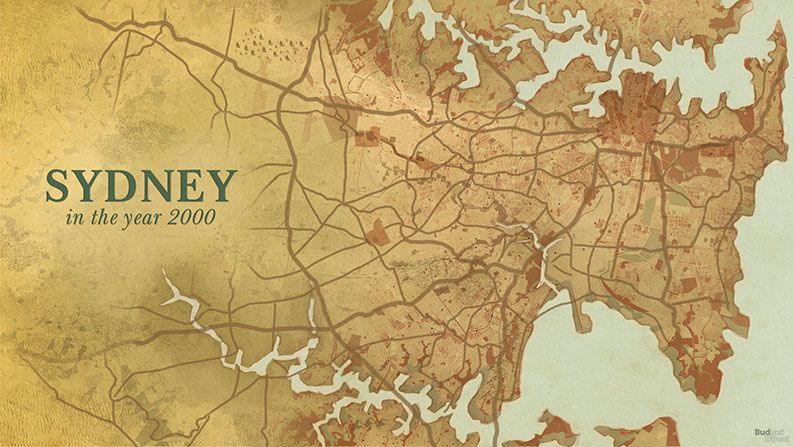 One major theme of the last 10 years in Sydney’s development is the construction of new high-rises and the redevelopment of old blighted industrial areas into mixed-use commercial, residential, and recreation centres. Recent examples include Barangaroo, an old shipping port in an industrial district, and Harold Park, an abandoned horse track and tram depot. Other major developments in Sydney from 2000 to 2018 include the opening of the M5 motorway in 2001 and the Westlink M7 motorway in 2005 — the southernmost and westernmost portions of the Sydney Orbital Network — Deutsche Bank Place in 2005, and the International Convention Centre in 2016. 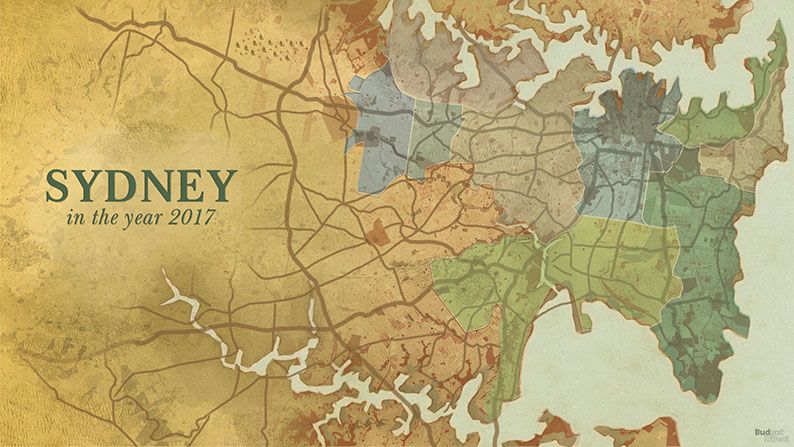 Once described by a First Fleet crew member as “the finest and most extensive harbour in the Universe,” Sydney today ranks as the third most liveable city in the world, according to the Economist Intelligence Unit.

As Sydney continues to grow — the UN World Urbanization Prospects projects the population will increase by nearly 1 million residents over the next 15 years — the city will continue to require bold vision, civic pride, and a unique pioneering spirit, just as it has for the last 250 years. 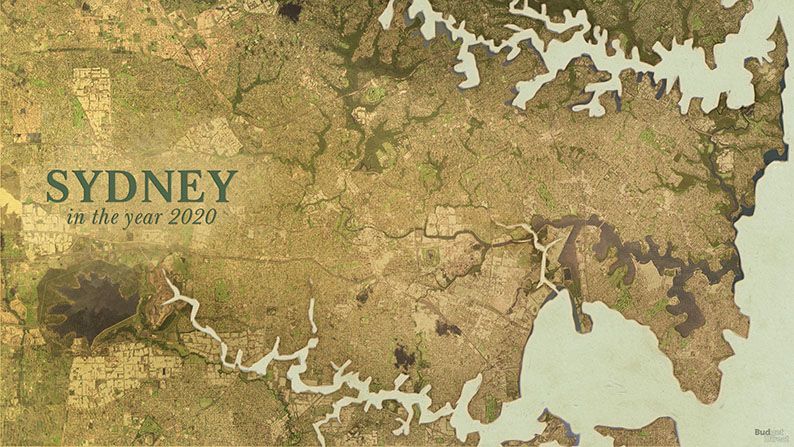 Newton, L. (2018). Sydney once had the biggest tram system in the southern hemisphere. abc.net.au

History of Sydney. (2016). The Strand Arcade – City Haven for a Hundred Years. historyofsydney.com.au