All of a sudden, you’re working from home. The water cooler’s been replaced by a dripping kitchen tap. Your legs are your desk. The office gossip is your toddler. It’s wonderful – but it’s not ideal.

You need a space to work. You need it to be comfortable and inspiring and moderately professional. But it can look however you like. Stylish. Characterful. Cinematic? Rather than flick through interior design magazines for ideas like everyone else, why not draw inspiration from the unique aesthetic of your favourite film director?

A little while back Budget Direct brought you six baby nurseries as though they were designed by popular children’s authors. Now it’s the grown-ups’ turn. We’ve created seven digital renders of home offices to die for: studies with interior design how Sofia Coppola, Wes Anderson, and other highly visual film directors might conjure for their remote working heroes. 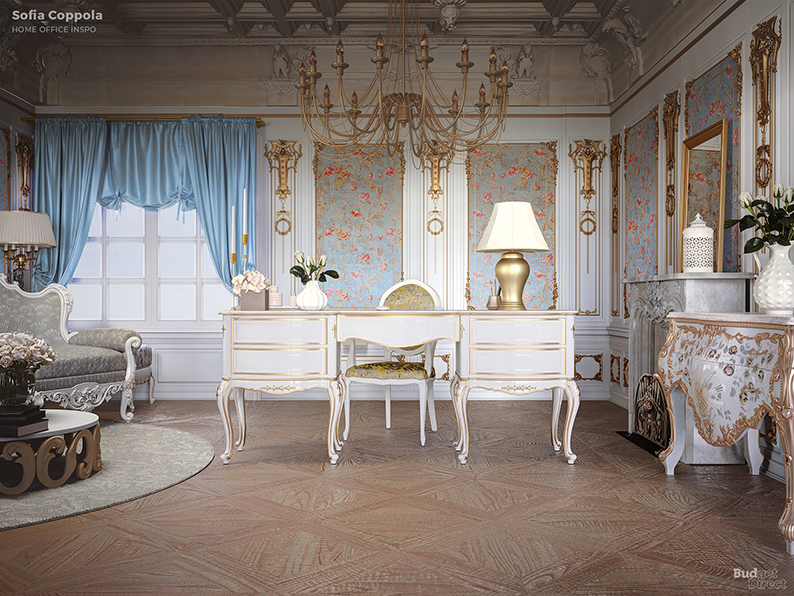 Interiors-wise, Sofia Coppola is best known for the dark, deluxe modernism of the hotel suites in Lost In Translation. But picture-for-picture, Coppola has developed a soft focus vintage look populated with pastel colours and an eye for exquisite bling.

Sure enough, Coppola’s own home look is pale and fey. “My apartment is pretty calm and restrained,” says the filmmaker. “I like a clean white backdrop set off by masses and masses of pink peonies.” We’ve erred towards Coppola’s professional aesthetic: a vintage dressing table desk, baroque curves, and plenty of baby blue and gold. 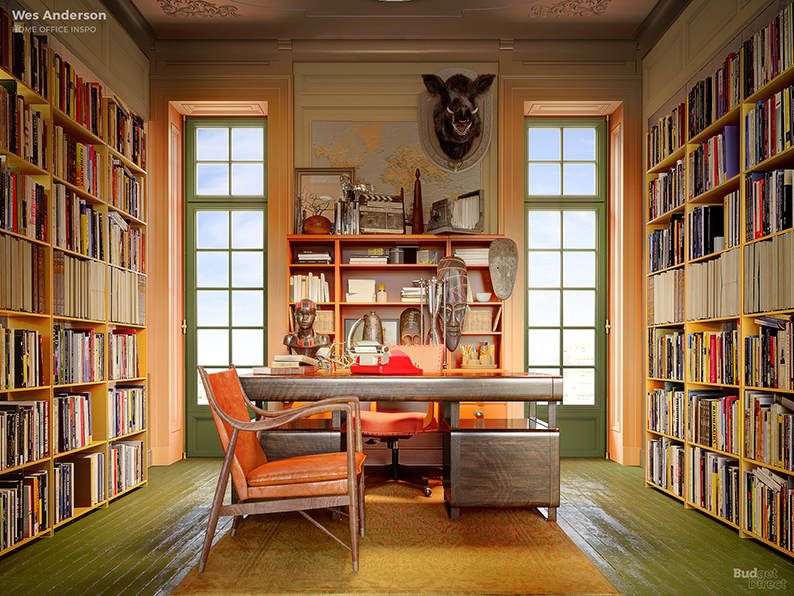 Wes Anderson becomes less of a filmmaker and more of a designer with every film he makes. Today, the Rushmore director is the ultimate architectural filmmaker. Anderson shapes the space of his film sets with symmetry and flat composition to present his characters in a world that is part theatre stage, and part expressionist dream world.

Our Wes Anderson home office dials it back to The Royal Tenenbaums era. We’ve combined organic colours and curated clutter with meticulously angled furniture. The back wall says, “this is where I’ve been.” The books and records say, “this is who I am.” And that vintage desk, aimed squarely at visitors, says “looks like I’m here to stay.” 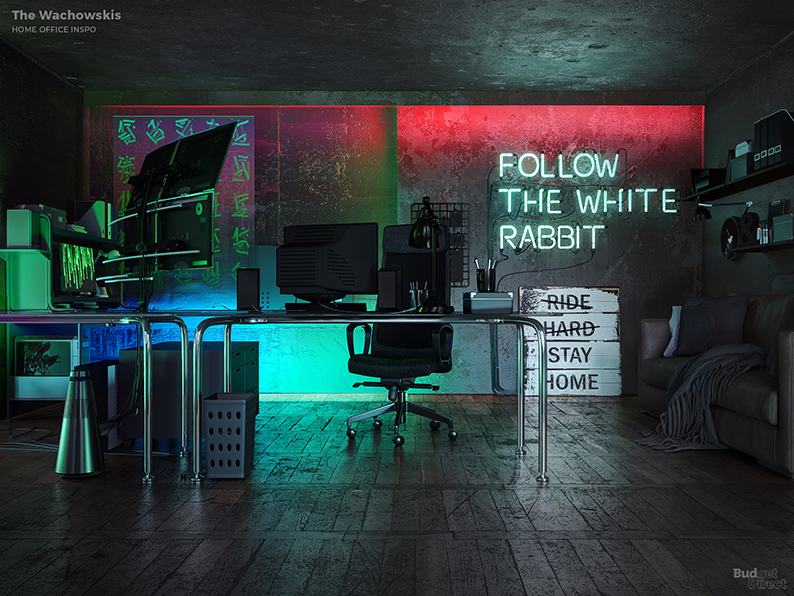 The Wachowskis shot to success and helped define our image of the 1990s with The Matrix, their second film. The movie and its sequels share a cyberpunk aesthetic that has become fun and iconic just because – as it turns out – the internet age doesn’t really look like that. Well, it can if you want a Wachowskis-themed study.

Our Wachowskis office represents the collapse of everything. Spot the post-industrial fixtures and fittings, abandoned 1980s office furniture, and repurposed wood and signage, for example. The Matrix home office makes a cool DIY project for an upcycler with an imagination. 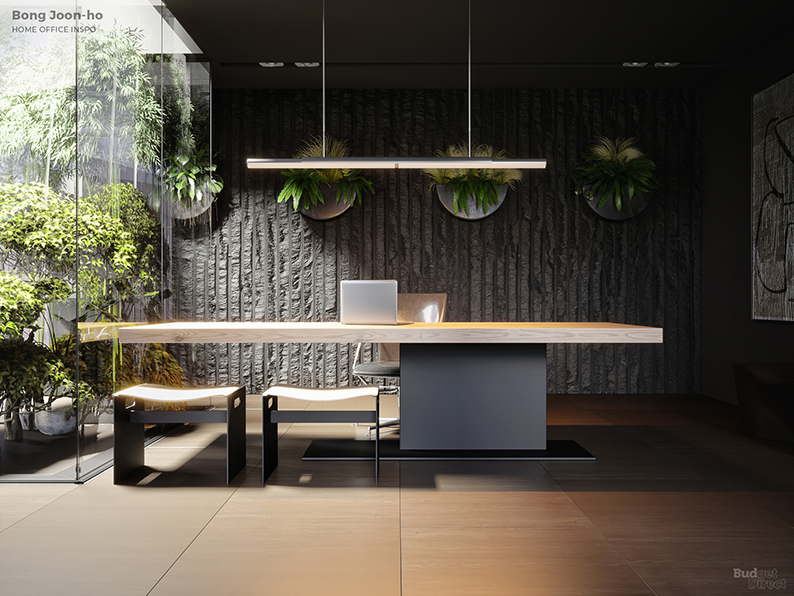 Korean director Bong Joon-ho achieved international fame in 2019 when Parasite became the first non-English-language film to win an Oscar. But cultured film-lovers were already familiar with his work, from the cool, satirical Memories of Murder to the Kubrick-tinged sci-fi of Snowpiercer.

Joon-ho’s diverse filmography has not prevented him from developing a consistent visual style. Glassy modernism with a hint of the wild is the way to go, with careful attention to light sources: large windows with natural light, glowing screens, and statement fittings. ‘Accidental’ geometry and textured surfaces add a touch of class. 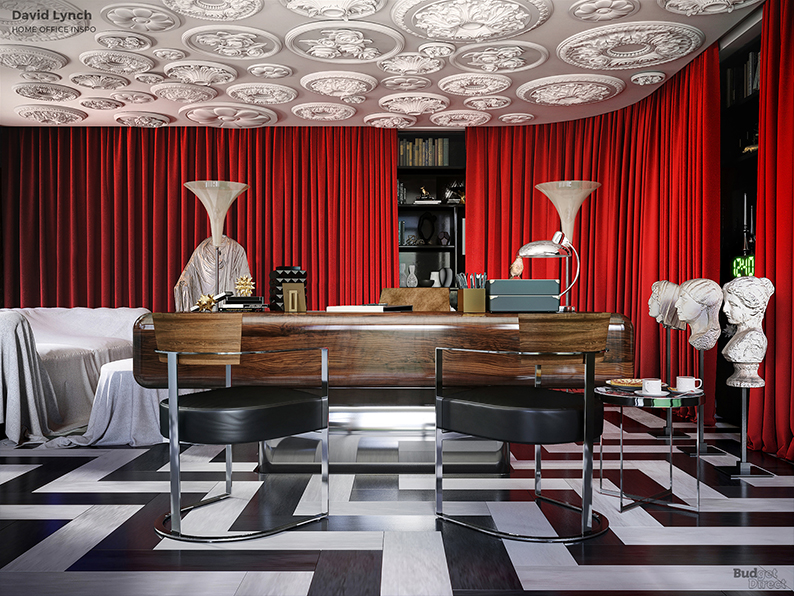 Of course, we know exactly what David Lynch’s home office looks like thanks to the Twin Peaks creator’s daily Weather Reports. And it sure looks Lynchian. However, if you’re after something with a bit more space and colour, you’re better off taking a cue from his films.

Yes, Lynch’s first features were in black and white, and Dune – although a colour movie – was obsessed with black. But since Blue Velvet, the filmmaker has shown us how to make basic prime colours equally stylish and creepy. To get that extra-dimensional look, start with the Twin Peaks red room, add a little 1950s Americana, and record your voicemail greeting backwards. 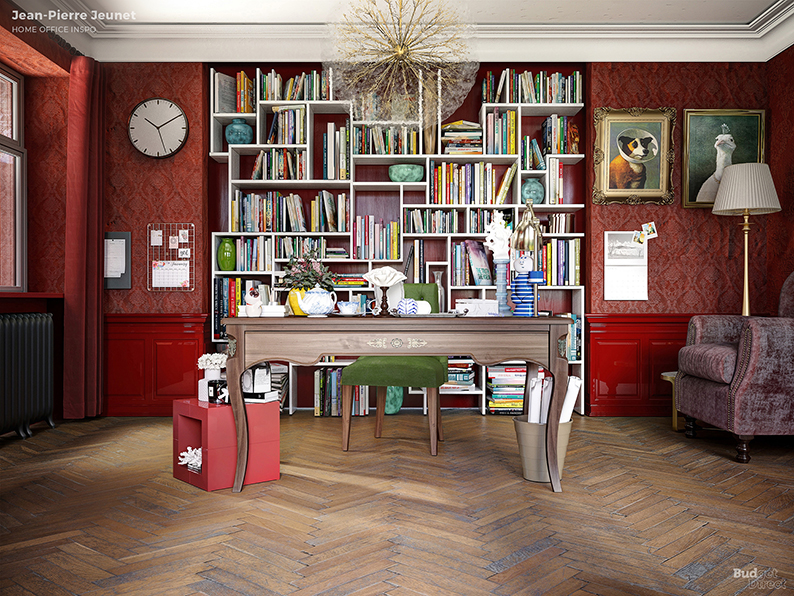 Jean-Pierre Jeunet’s worlds aren’t always places you’d want to live and work. But his bitter bubble-gum sci-fi City of Lost Children and post-apocalyptic odd-house comedy Delicatessen are as inventive as they are gloomy. With Amélie, Jeunet finally had homeowners reaching for the paint rollers.

Amélie took the grim visual motifs that made Jeunet’s films stand out, made them lovely, and applied them to a Paris coated in sepia. To design your own Amélie-style home office, start with a strict Christmas tree colour scheme for the fixtures and fittings, and then trawl op shops, Etsy, and eBay to find objets d’art with a life of their own. 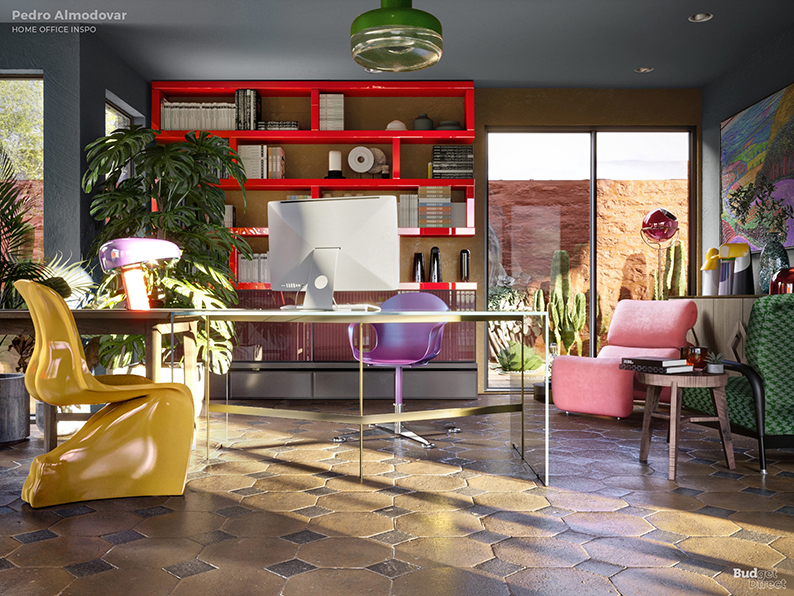 “I wanted a pop-art kind of set, with pastel colours,” says Spanish film director Pedro Almodovar of his 1988 breakthrough, Women on the Verge of a Nervous Breakdown. “If I’d had the money and the contacts, I would have asked David Hockney to design it.” But in the three decades and 14 features since then, Almodovar’s aesthetic has become unattributable to any artist but himself.

The pop art element is still there, but Almodovar’s is a look both swarthy and slick, raw and pushed to the excesses of sophistication. The interior design in his latest, Pain and Glory, demonstrates the filmmaker’s over-the-top philosophy: if every element sticks out, no element sticks out. For our Almodovarian home office, that means the unifying principle is “anything goes” – as long as it’s fabulous.

The directors in our study might not be interior designers, but they excel at creating a unified, captivating look for each film and across their careers. They know how to add not just style, but character, story, and drama to a room. If you’re making or redecorating a home office where you live, far away from your colleagues, these are vital elements that you won’t find in the Home & Garden section of the Sunday supplements. And your Zoom background has never looked so cinematic.