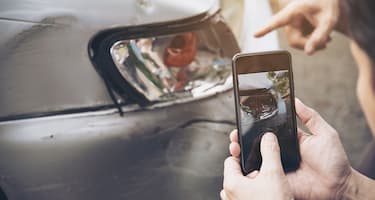 Find out just what causes car accidents in Australia, how often they occur, and Australians’ attitudes toward them in our latest survey and statistics analysis.

Car accidents are a sad, yet common part of life. In fact, “land transport accidents” were one of the leading causes of death among Australians aged from 1-24[1]. And yet, in a country as vast as Australia, driving is an essential part of life.

The key to avoiding accidents shouldn’t be avoiding car travel – rather understanding the specific triggers, and ensuring our habits are as healthy as possible.

To help understand the current rates, causes, and attitudes regarding car accidents, we collected government statistics, and surveyed 1,000 Australians with driver’s licences to bring you:

Drivers can be easily distracted by phones, eating/drinking, smoking/vaping, applying makeup, and plenty of other common day-to-day things.

“Fatigued sleep” can be due to a lack of quality sleep, a lot of time spend driving, a lack of stimulation, or a busy social/work schedule.

1-2 standard drinks can be all it takes to push people above the legal blood alcohol concentration (BAC) limit.

2.1 Causes of road fatalities in each state

Number of road fatalities from each cause[2]

2.2 Road fatalities per 100,000 registered motor vehicles in each state/territory

To determine the car accident rates of each state, the total road fatalities were measured for every 100,000 registered vehicles in that state[7][8]. The general trend across Australia from 2016 to 2020 was that crash rates per vehicle on the roads decreased by 21%. However, Queensland and South Australia saw minor uplifts in this rate, meaning that road fatalities grew at a greater rate than the number of vehicles registered.

Data from BITRE shows the five local regions (SA4s) with the highest numbers of road fatalities[7]. Wide Bay (a region around Bundaberg and Gympie in Queensland[9]) had 45 road fatalities in one year – averaging nearly one a week. However, it’s also worth remembering these regions will vary in size, and these figures don’t represent your overall safety driving in any area.

Of the top 11 SA4s for car accidents in 2020, 5 were in Queensland. Western Australia, Tasmania and the Australian Capital Territory did not feature in the top 10.

3.1 How frequently do you drive on congested roads?

Western Australian respondents seemed to have the highest rate of driving in congested conditions of any state or territory in Australia. On the other hand, Tasmanians and New South Wales-based participants had the lowest rates of suggesting they often drive through congestion.

3.2 How many car accidents have you been in? (regardless of if you were driving or if you were at fault)

Around 64% of Australian respondents indicated they had been involved in at least 1 car accident before. However, this rate rose to around 69% in Victoria, and over 71% in Tasmania.

Male respondents also have a higher rate of having been in an accident before (65%) than women (62%).

3.3 Which of the following types of car collisions have you been involved in?*

*Only respondents who had indicated they had been involved in car accidents before were given this prompt. Respondents could also select multiple options, meaning answers may not add up to 100%.

3.4 Which of the following scenarios do you worry about most?

3.5 What do you believe to be the leading cause of car accidents?

By asking all Australian respondents to order each cause of car accidents from most to least likely, the list above represents the average placements of each cause. Speeding was voted the most likely cause of car accidents, followed by distracted driving, aggressive driving, drink driving, fatigued driving, and several other driving behaviours. Interestingly, Australians do feel that the fault lies with the driver (not the roads), voting poorly designed roads / intersections the least likely cause of crashes.

These results closely match trends across Australia, which show that speeding has been the greatest cause of road fatalities. However, drink driving and fatigued driving are often the two most common causes[2], which our respondents didn’t consider to be as risky as distracted driving, or aggressive driving.

3.6 Which roads do you feel safest driving on?

Interestingly, the average Australian result showed that country/rural roads were voted as feeling the least safe roads to drive on. 41% of respondents voted for “Motorways/freeways” as their safest roads, and another 16% felt it was their second-safest road option.

This might seem obvious, but road laws are only there to help keep drivers safe. Things like speed limits, blood alcohol concentration (BAC) limits, road signs – they all help ensure drivers have the best chances possible to avoid accidents.

Aggressive driving only increases your chances of being involved in an accident. Tailgating, gestures, and risky acceleration all create scenarios where your reaction times are limited, and your chances of avoiding a crash are reduced.

Fatigued driving is an obvious contributor to road accidents across Australia. If you feel yourself getting tired on the road, it’s never worth pressing on. Finding somewhere to stop and recharge will always be the smartest way to avoid an accident.

[1] Australian Institute of Health and Welfare, 2021, Deaths in Australia.

Disclaimer: This survey was conducted by Pure Profile on behalf of Budget Direct in August 2021. The survey was conducted online with a total sample size of 1,000, weighted and representative of all Australian adults (aged 18+) with driver’s licences. All other data on this website is the latest available from the named sources in the references above, and was obtained in August 2021. Auto & General Services Pty Ltd does not guarantee the accuracy or completeness of the data and accepts no liability whatsoever arising from or connected in any way to the use or reliance upon this data.