Whether you dream of a beautiful beach house in Bondi or you crave the urban chic of a Manhattan loft space, there’s no escaping the fact that all great homes are shaped by their surroundings.

To celebrate the diversity of interior design trends around the world, we asked people on Reddit to describe their city in a few words.

Some of the answers were a little tongue-in-cheek, but from the ‘greige’ of New York to the ‘samba’ of Rio De Janeiro, we brought these word clouds to life, by designing 8 rooms for 8 cities.

Have a look at the rooms below to see how we’ve channelled the energy and the architecture that make each of these cities feel like home to the people that live there. 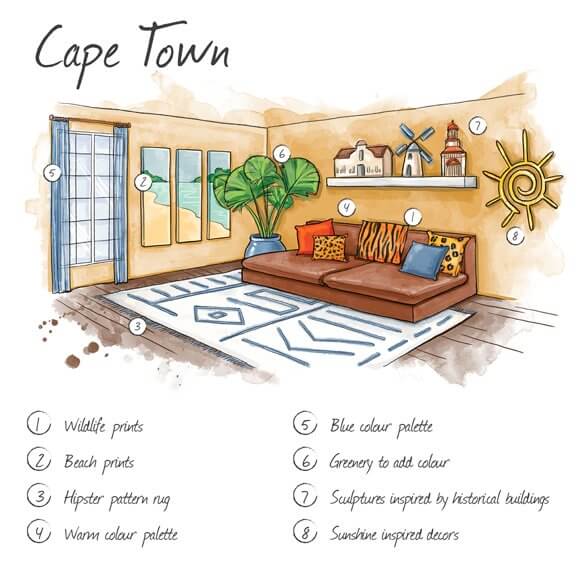 Cape Town is renowned for its waterfront, which is made more inviting by its bright, warm climate. With a landscape like this, it’s hard to believe people stay indoors! So, when they do, their interiors should be as serene as the nature that surrounds them. Residents of the capital used words like ‘sunshine,’ ‘relaxing’ and ‘wildlife’ to describe their home place, illustrated here by warm hues, botanical touches and animal print fabrics. 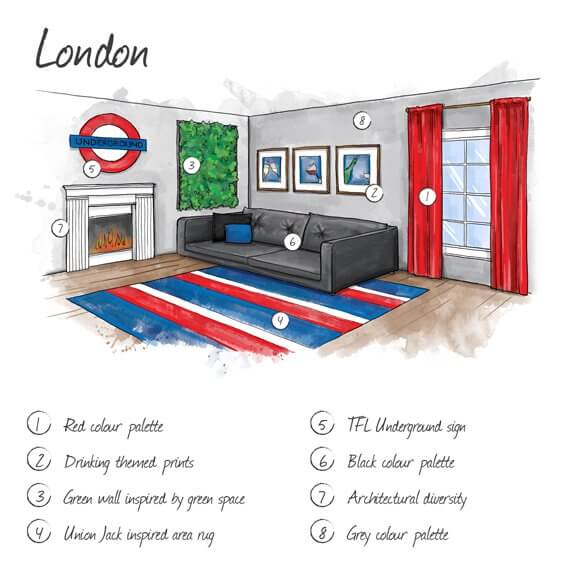 It’s believed that Londoners spend around 107 hours a year commuting, so when asked to describe their city, it’s hardly surprising that the London Underground sign popped up! The quintessentially British red white and blue sign is unforgettable— for many reasons! But fear not, they also used ‘green spaces’ to reflect upon their home, with many flocking to the Royal Parks to rejuvenate on weekends.

What is Sydney without its gnarly surfers and long spanning beaches?! Bringing in the outdoors, this tropical hut riffs on the famous opera house’s unmistakable silhouette for a lamp shade, and uses rugged drift wood a plenty. Locals also conjured up the bright purple jacaranda trees which can be seen on the canvas, and in full bloom across October to November, filling the city with lavender leaves! 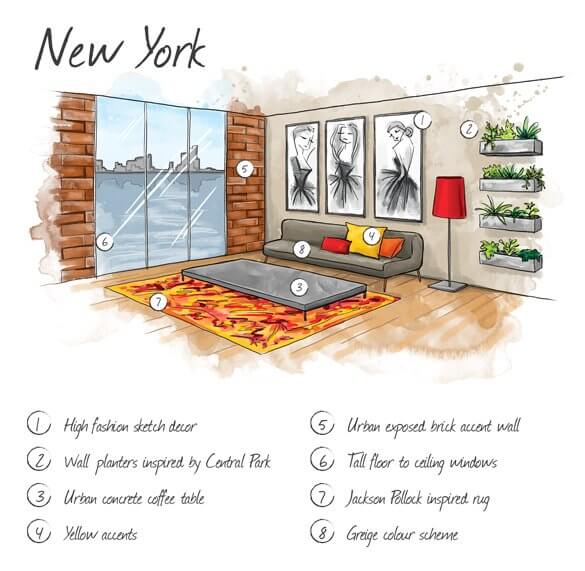 Art and fashion: two words that New Yorker’s love about their city. This tall concrete jungle was described by Redditors as ‘Griege,’ a blend of grey and beige. Yet, the colours which really stand out for people in the Big Apple are the fiery reds and oranges of an Autumn day in Central Park, which are signified here by the burnt browns of industrial exposed brick. 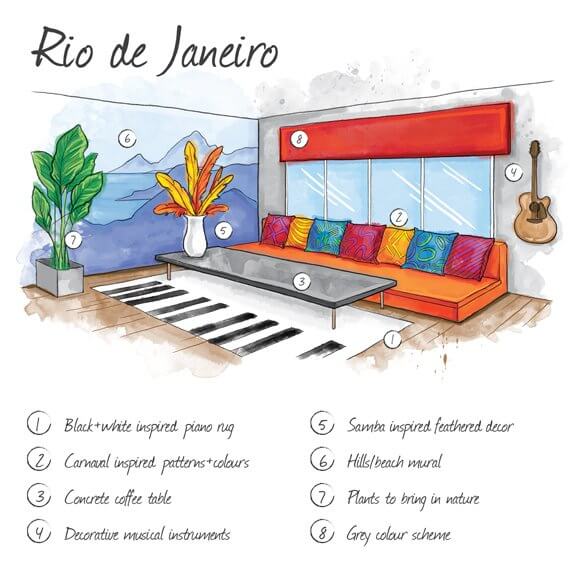 This interior epitomises the spectacularly colourful carnivals and musical heritage that Rio de Janeiro knows and loves! ‘Samba’, ‘green’ and ‘gold’ are all words representative of Brazil’s vibrant, bustling, city, offset against the black and white of the piano rug, which pays homage to the upbeat sounds of Bossa Nova, one of the words that Redditors associate with the city. 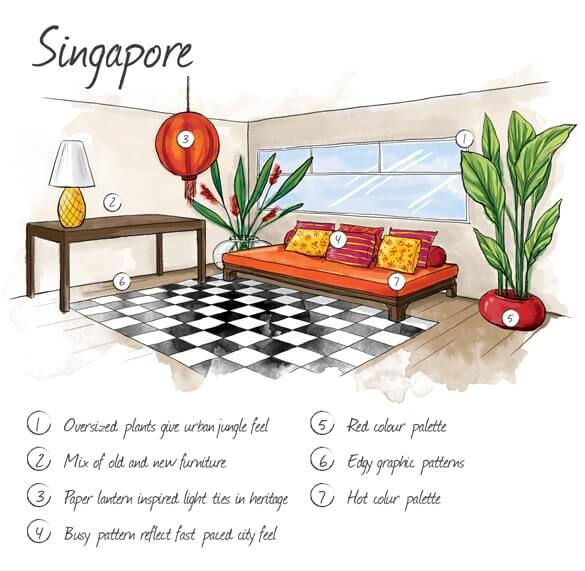 Different shaped furniture and pottery give this room its ‘edgy’ characteristic, which many native residents associate with the city. The clashing patterns of the rug and cushions reflect the fast-paced urban lifestyle that the city evoked for its inhabitants.  However, the stripped back flooring and lantern were chosen to reflect the marrying of Singapore’s old and new traditions. This room is as grand and decadent as the luxurious hotels that span central Paris. The sofa places a modern twist on a vintage classic, something that Paris’ residents drew upon. The grey and silver furnishings are homage to the cast-iron found across the capital and the draping curtains are a nod at the artists Christo and Jeanne-Claude, who famously wrapped some of France’s most famous landmarks! 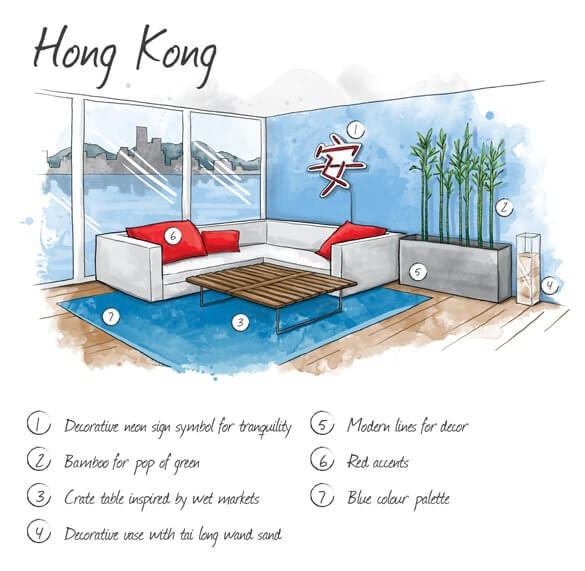 The modern landscape of Hong Kong is complemented by its efficient apartments, attractive in their practicality. Neon light floods the streets and often lights up homes through large glass windows. When asked what colours their city meant to them, Redditors drew upon blue and red—the latter, a culturally iconic colour reflecting wet markets and their fresh meats, red taxis, and the red glaze of delicious Char Siu!

The Difference Between Food Allergies and Food Intolerance