Are Aussies doing the right thing when it comes to the recycling bin? We surveyed 1000 of Australia’s finest bin users to find out.

Disclaimer: This survey was conducted by Google Surveys on behalf of Budget Direct in October 2019. All figures are from this research unless stated otherwise. The survey was conducted online with a total sample size of 1,000 weighted and representative of all Australian adults (aged 18+). Auto & General Services Pty Ltd does not guarantee the accuracy or completeness of the data and accepts no liability whatsoever arising from or connected in any way to the use or reliance upon this data.

The average Australian generates 540kg of household waste every year which equates to roughly 1.5kg of waste a day. From 2016-2017 Australia accumulated around 67 million tonnes of waste, but sadly only a third of this waste was recycled. Now those are some pretty scary facts, so here’s the good news! More and more Australians are making efforts to reduce their household waste and recycle their old stuff such as their clothes and phones. We’ve asked over 1000 Aussies about their recycling practices and the results are in, the yellow bins are going out.

Have you done anything in the last 12 months to reduce your household waste?

Over half of Australians (62%) have made an effort to reduce the amount of waste in their homes. Three quarters of people aged 65 or over had made efforts to reduce their waste while only 55% of 18-24 year olds had made similar efforts. 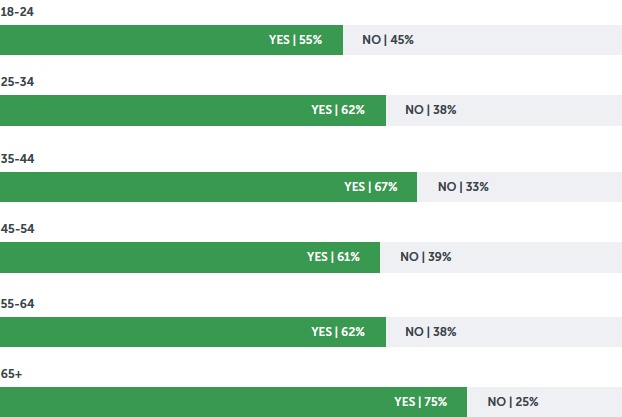 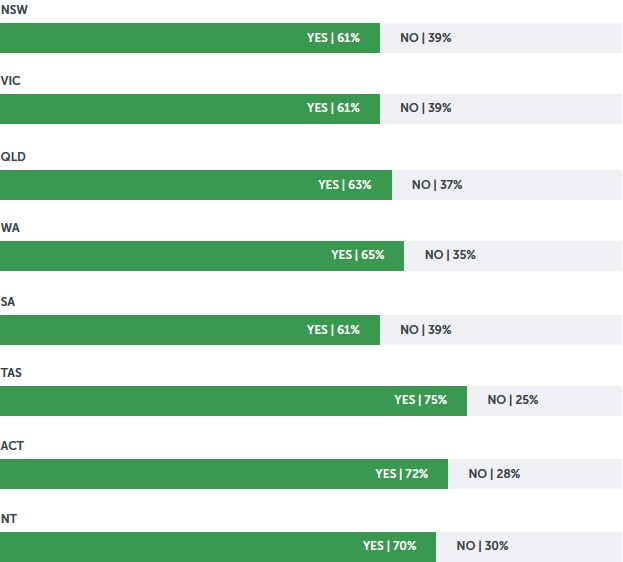 Has your workplace done anything in the last 12 months to reduce waste? 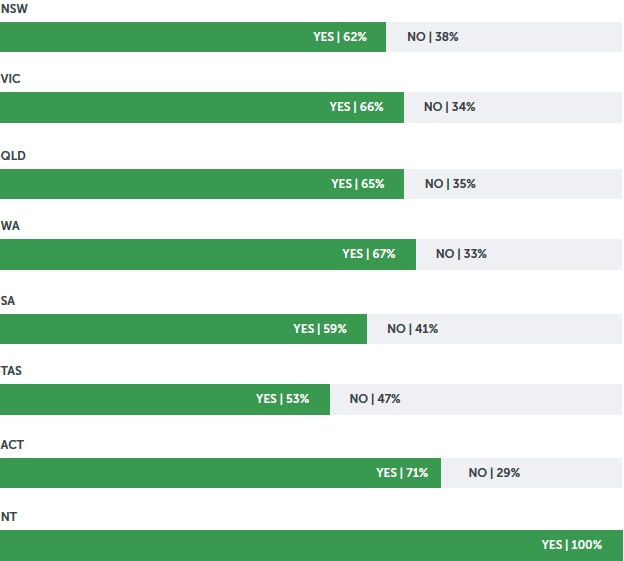 Are you confused about which items should/shouldn’t be placed in the recycling bin?

Only 20% of Australians aren’t confident they know what items go where when it comes to rubbish and recycling. People aged 18-24 were the least confident they knew which items should and shouldn’t be recycled at 31%. People who were the most confident in understanding proper recycling practices were aged 45-54. 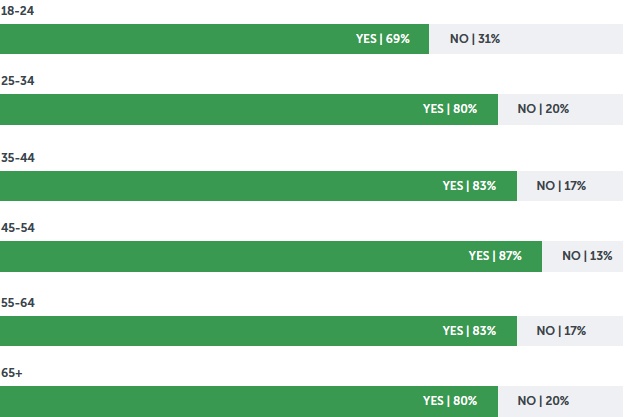 The state taking the cake for understanding what goes where for recycling was the Northern Territory, with 100% of respondents replying that they were confident in their recycling know-how. Victorians were the most unsure, with 26% of respondents claiming they weren’t 100% on which items should and shouldn’t be recycled. 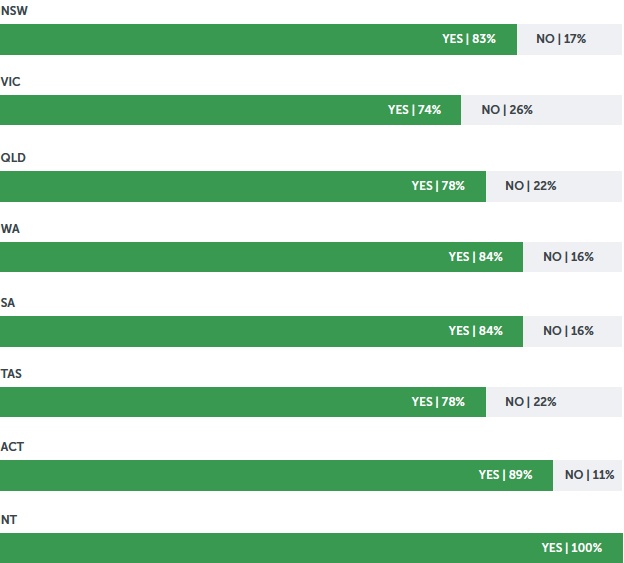 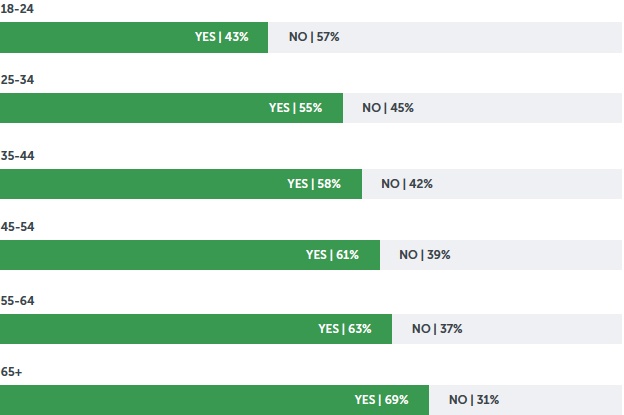 Tasmanian respondents were the biggest on recycling their old tech at 78% while people from the Northern Territory were the least likely to recycle their obsolete technology at 26%. 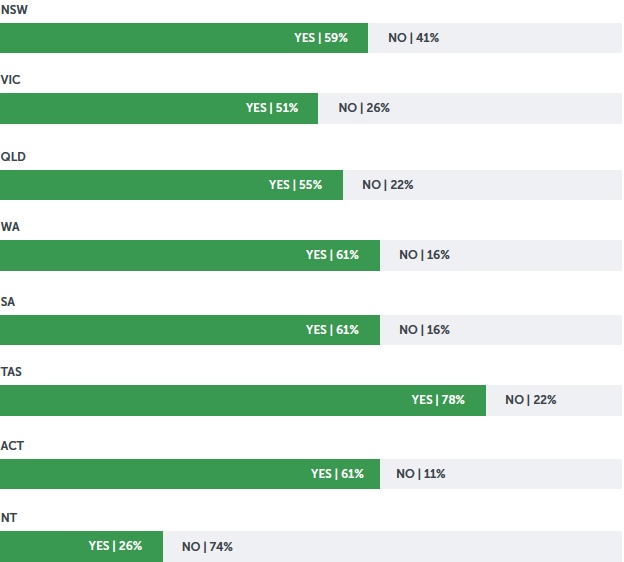 Do you donate used clothes to opportunity/charity shops regularly? 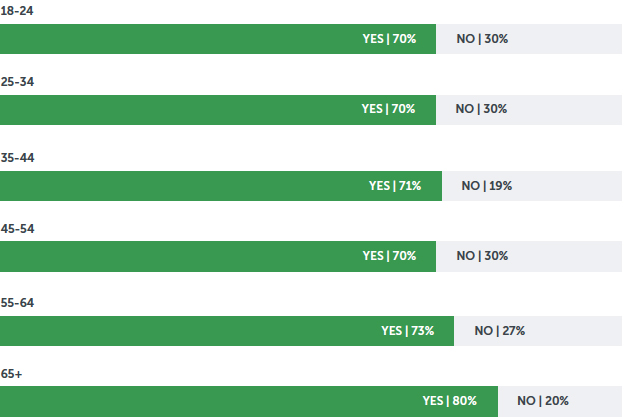 Females were by far more likely to donate their used clothes than male respondents by almost 20%. Whether they are donating the clothes of just themselves or for the whole family is unknown.

Do you use reusable shopping bags?

85% of Aussies are using reusable shopping bags. With the introduction of the ban on single use plastic bags at the two major grocery stores in July 2018 in most states, the majority of Australians needed to make the switch to reusable plastic bags. Females however were still more likely to remember to bring their reusable shopping bags than male respondents, with 92% of females versus 78% of males.

Which of these reusable products do you use regularly? 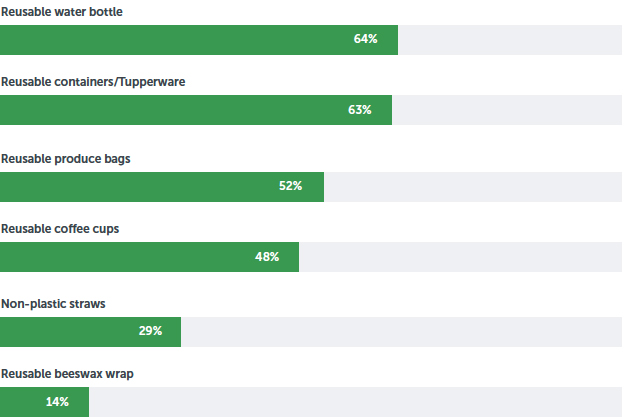 84% of Australians are using reusable products to reduce their impact on the environment. The most commonly used reusable item was a water bottle, with 64% of respondents saying they owned one.

Do you use plastic recycling services such as REDcycle to recycle your soft plastics?

29% of people use REDcycle and other recycling services to recycle their soft plastics (such as bread bags, chip packets, glad wrap etc). People aged 65 and over were the most likely to use recycling services for the soft plastics with 39% saying they used REDcycle and other programs like it. People aged 45-54 were the least likely to use them at 25%. 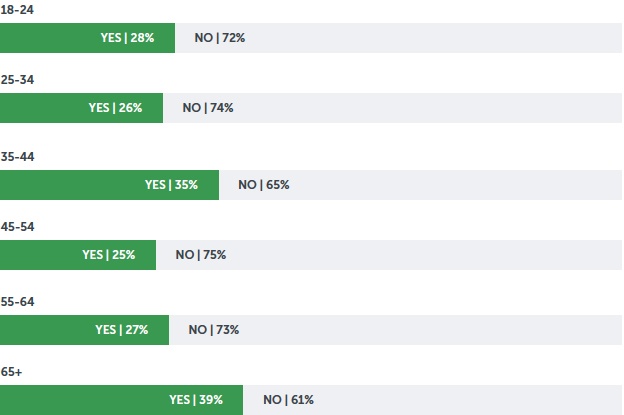 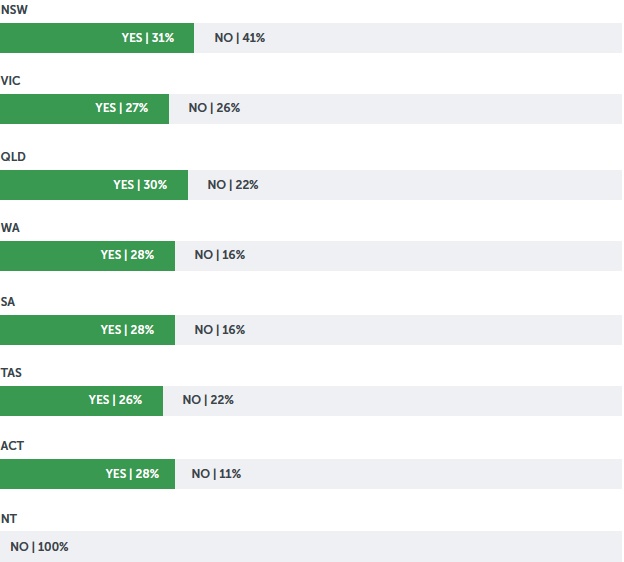 Do you partake in your states’ waste reduction incentives?

Just under half (48.5%) partake in the waste reduction incentives in their states and territories. People aged over 65 were the most likely to take part in their states waste reduction incentive schemes with 65% of them saying yes. People aged between 18- 24 were the least likely to take part in the programs with only 44% of respondents saying they used the incentive programs. 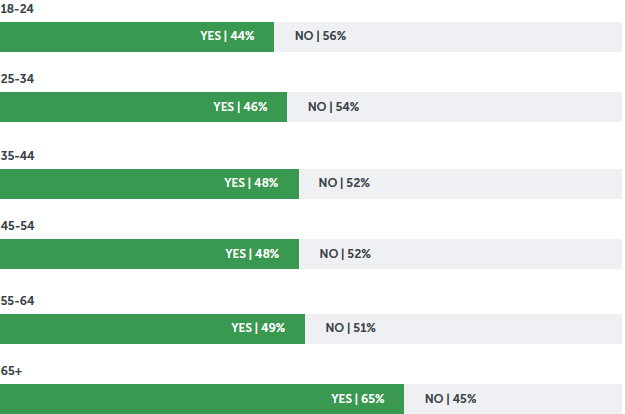 Respondents from Victoria were the least likely to take part in their state’s waste reduction incentive with only 35% saying they used the incentive schemes. People from the Northern Territory were much more likely to take part in their Territory’s incentive scheme, with 100% of those surveyed saying they used the incentive programs. One potential reason for this is a result of the fact that the Northern Territory’s container deposit scheme was introduced in 2012, while states like Queensland only had their container deposit scheme introduced in 2018. What prevents you from recycling?

One conclusion the survey results suggest is that further education and resources are needed to help the Australian public understand the importance of recycling and the best and different ways everyone can contribute to the national recycling effort. While 14% of Australians just aren’t remembering to recycle, for the 20% of Australians that are just not bothered to recycle or who don’t understand how to recycle properly, further education is the best means of encouraging more and better recycling practises.