These days, ‘Alexa’ and ‘Siri’ feel like old friends you’ve known for years, while the phrase ‘OK, Google’ is firmly entrenched in the common lexicon. Why? Two simple words: smart devices. More specifically, smart home devices. Love them or hate them, smart home devices have been taking Australia by storm, with their inexorable rise showing no signs of slowing down any time soon.

While many people view this as a significant technological advancement, privacy and security concerns have left others less convinced. Accordingly, a new survey by Budget Direct Home Insurance provides insight into surveyed Australians’ attitudes, concerns, and purchasing intentions for smart home devices. The survey used a used a sample size of 1,000 people weighted to be representative of Australian adults aged 18+. 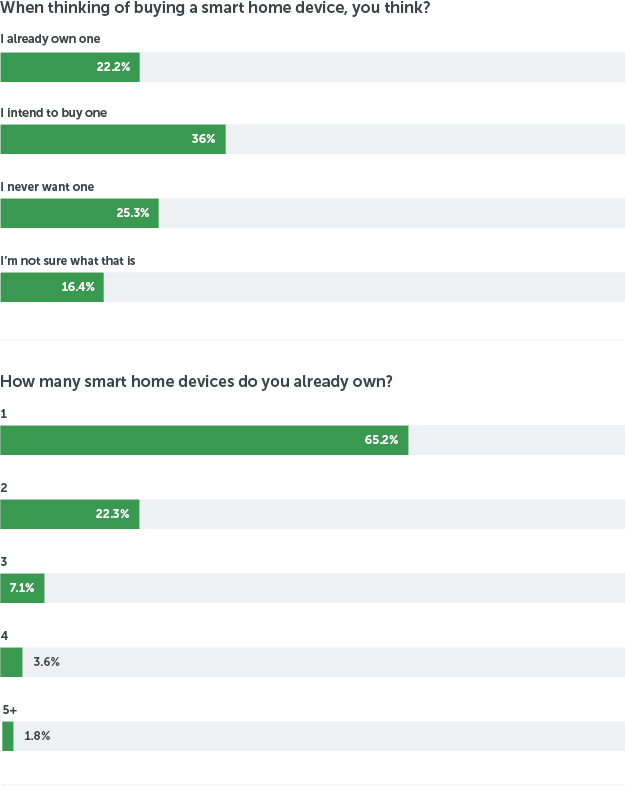 While one might assume that younger, more technologically savvy people would be more likely to own a smart home device, actually, there was little difference between the surveyed age groups. 25-34 year olds were the surveyed age group most likely to own a smart home device with 28.2%. At the other end of the scale, 65+ year olds were the least likely with 18.3%, with most other age groups hovering around the overall average of 22%.

Nevertheless, this generational gap widened when it came to respondents’ intentions to purchase a smart home. Once again, surveyed 25-34 year olds led the way, with 47.3% saying they intended to buy a smart home device. This percentage decreased for every subsequent age group, reaching a low of just 17.3% of surveyed 65+ year olds.

Operations Manager at Get Smart Home Vinny Sareen elaborates, saying, “it’s somewhat natural and intuitive to overlook the power of smart home technology, especially if a user has had limited experience with it.” As such, it is possible this generational gap will narrow as smart home devices become more common. 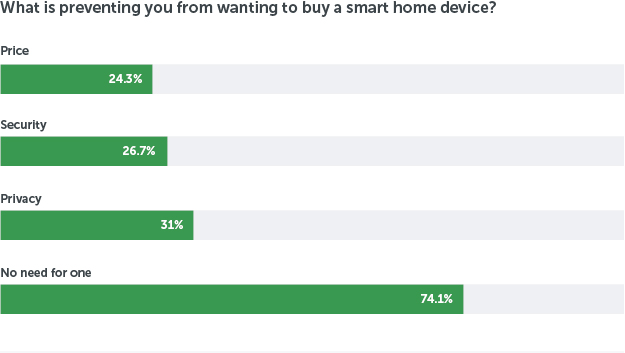 When the 25.3% of respondents who said they never wanted to own a smart home device were asked to explain why, several concerns became apparent. Most notably, 74.1% said they simply had no need for one, including a massive 91.6% of 65+ year olds. Even so, Vinny Sareen argues that smart home devices have many practical uses, saying, “a reliable and smart home system setup, if done correctly, has the potential to improve the safety, connectivity, and convenience of how an average household member connects with their home.”

He continues, explaining that smart homes have more uses than the average person is aware of, “the scope of capability of our smart home automation hubs is ever expanding - from lighting, power control, safety, and security - your entire home ecosystem is allowed to explore its full potential by lifting the connectivity within itself and being able to do some cool and useful stuff.”

Just as notable were the 31% who cited ‘privacy’ as a concern, as well as the 26.7% who cited ‘security’. Therefore, more than half (57.7%) of respondents were concerned about privacy or security.

Product Manager at SmartHome Brad Arthur agrees with these findings, acknowledging privacy/security is a “very real issue and concern.” Despite this, he offers hope for potential smart home buyers, saying, “my best advice is to talk to an expert if [you] have concerns regarding security and smart home devices - there are ways to achieve very secure smart home systems that an expert can assist with.”

Similarly, 45.5% of 18-24 year olds were concerned about privacy, compared to just 19.3% of 65+ year olds. One possible explanation is that younger people reported higher intentions to buy smart home devices, and were therefore more attuned to related news, research, and controversies.

Elsewhere, 24.3% of respondents said price was preventing them from buying a smart home device. Still, as smart home devices become more common, it is likely that prices will drop, meaning this may not necessarily be a long-term concern.

72% are satisfied with their smart home device 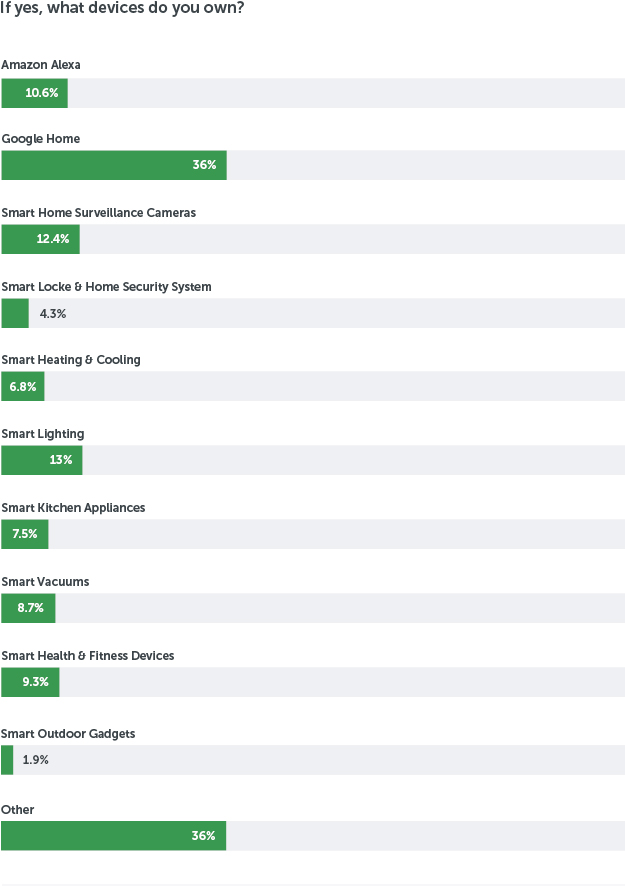 While privacy, security, and price are all justifiable concerns, the good news is that 71.9% of people who already own a smart home device were satisfied with their device(s), while another 17% were satisfied to some degree. This might not be enough to convince the holdouts, but it’s certainly an encouraging sign. Only 1.8% of respondents said they weren’t satisfied with their device(s), with the remaining 9.4% still getting used to the technology. Google Home was by far the most popular (36%) smart home device among respondents, with other options splitting the vote fairly evenly.

On a more light-hearted note, 18-24 year olds were actually the surveyed age group who struggled the most (13.8%) to get used to smart home technology. Yet, 18-24 year olds are often seen as more ‘tech savvy’ than their older counterparts. When it comes to operating smart home devices, it seems that age really does equal wisdom.

Despite security issues, privacy concerns, and even a few problems adjusting to the technology, 55.9% of respondents were excited for the future of smart homes. However, this enthusiasm comes with an important caveat. Once again, a major generational divide emerged.

This survey was conducted by Pure Profile on behalf of Budget Direct in October 2018. All figures are from this research unless stated otherwise. The survey was conducted online with a total sample size of 1,000 weighted and representative of all Australian adults (aged 18+)

How to take inventory of your home contents for insurance
Your guide to decluttering and living an organised life
Smart home survey reveals generational divide, privacy concerns and more
Should I consider Accidental Damage Insurance?
What is a certificate of currency?
Does home insurance cover water leaks?
How to Switch Home Insurance Providers