A billion two-ton lumps of metal hurtle up and down the world’s roads every day.

Each one carries at least one human life. So, while the majority of drivers are working full-time to avoid colliding with others, it should hardly be a surprise that 1.35 million people die in road crashes every year. More than half of these deaths are among pedestrians, cyclists, and motorcyclists.

Perversely, the ‘quiet time’ of pandemic lockdown only made things worse. Empty roads encouraged racy driving, and blood spilled: in the US, road deaths rose by 8% even though mileage was down by 13%.

However, some roads – like some drivers – are better made for safety than others. Budget Direct enlisted Neomam to put on their research safety helmets and go looking for the most dangerous road in every country for which accident rates were available. 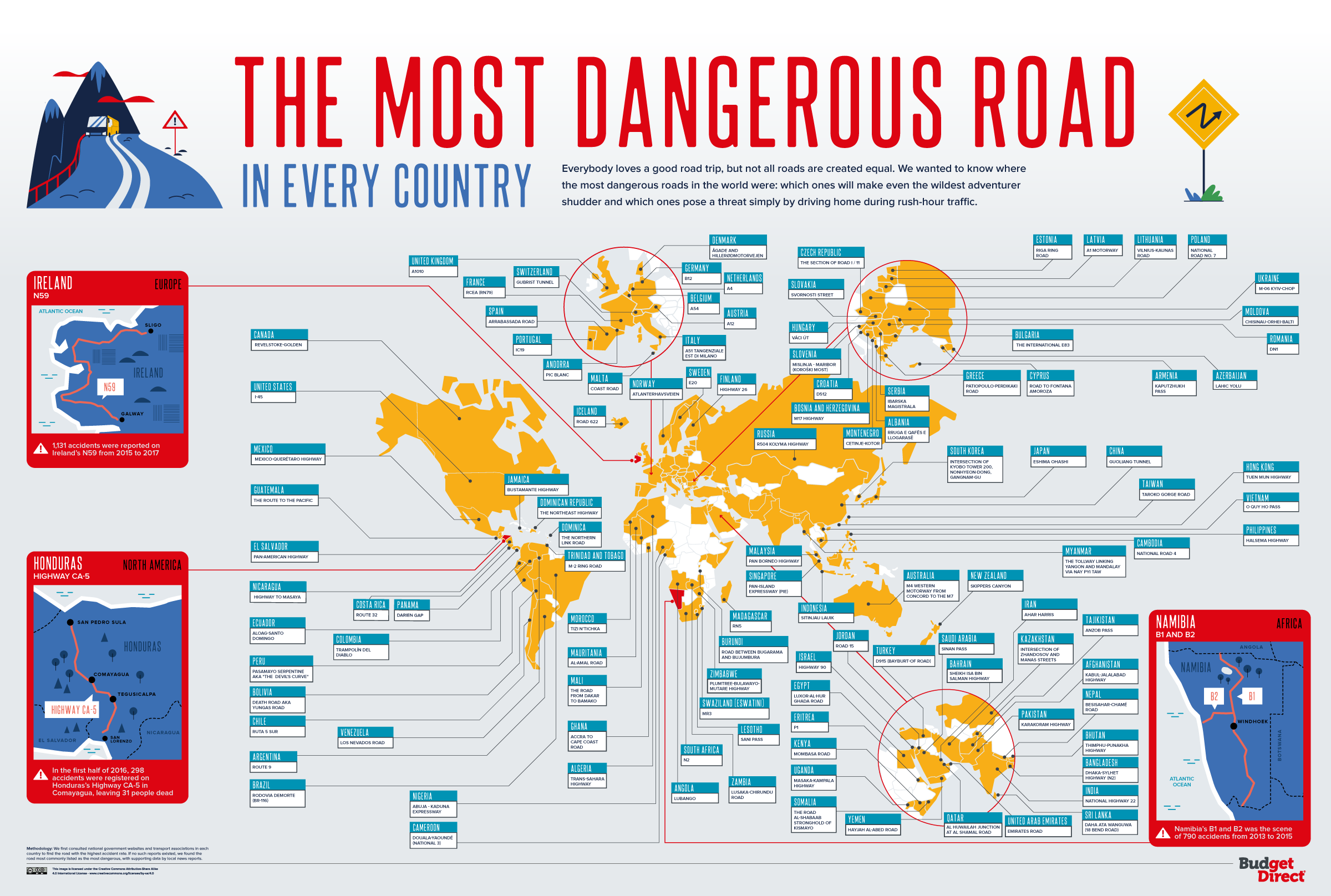 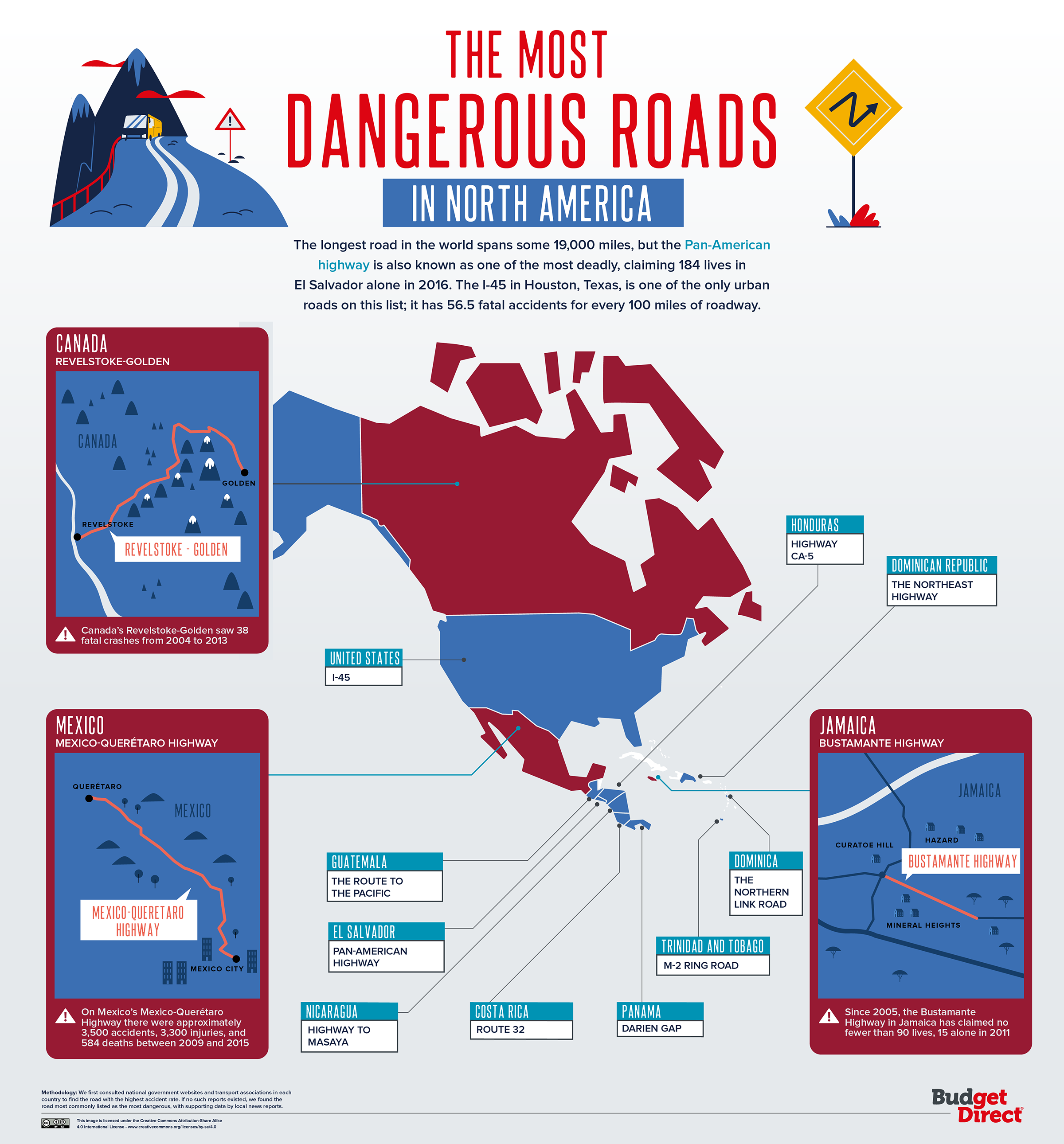 The most deadly road in the United States is Interstate 45, running north from Galveston to Dallas through Houston, Texas. This road has seen 56.5 fatal accidents for every 100 miles of roadway, thanks to a combination of busy, urban stretches and driver complacency. Harris County is currently suing the Texas transportation department to prevent a planned expansion of the deadly road.

Nicaragua’s roads are among the most dangerous in the region “due to pedestrian recklessness, disrespect for traffic signals, and blunders of design,” according to local commentary. In a single year, sixteen people died on a 12 km stretch of the NIC-4 where it meets the NIC-20 on the route to Masaya. 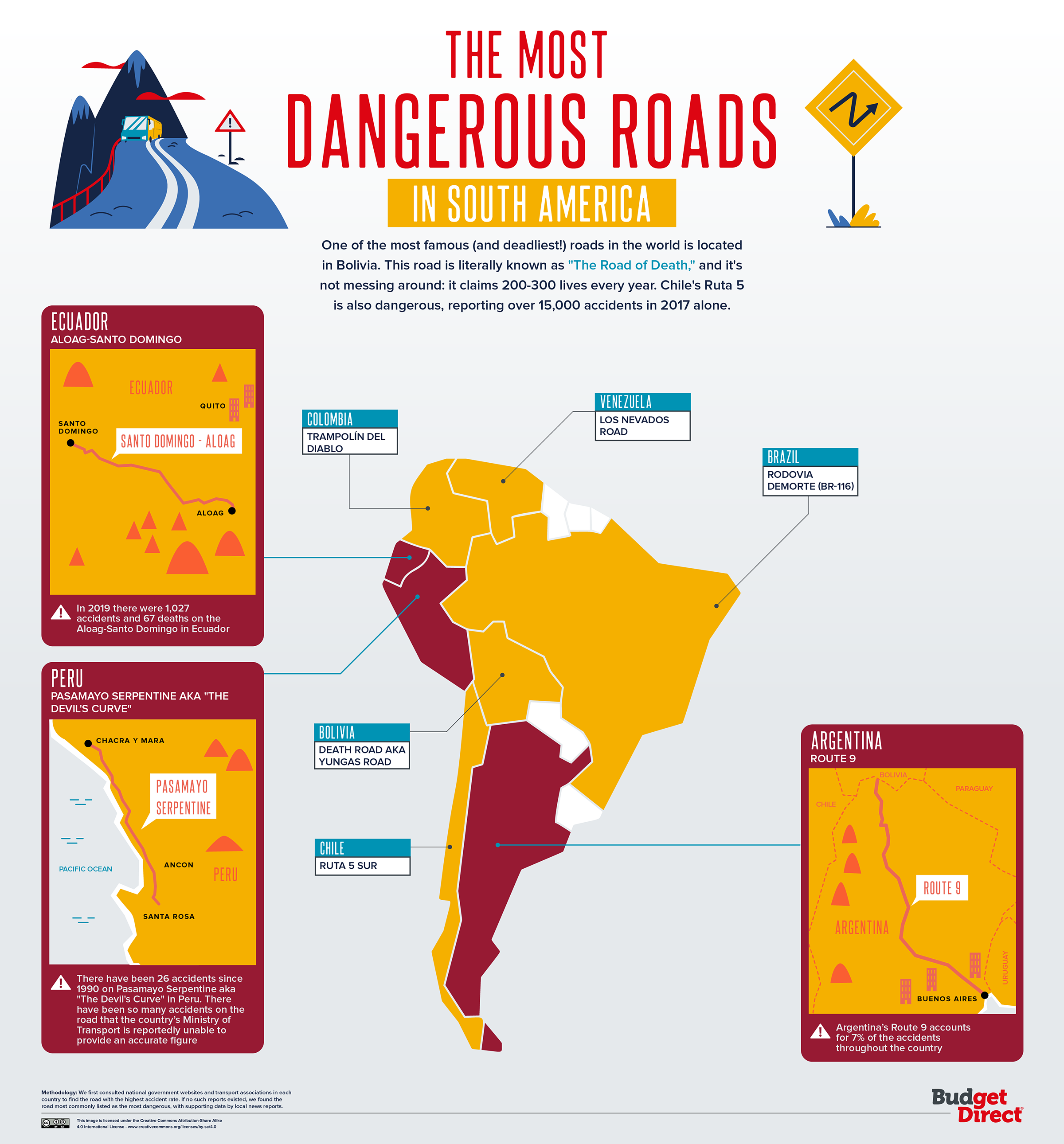 Would you take a route known as Death Road if there was an alternative? Bolivia’s Yungas Road through the Cordillera Oriental mountain chain is such a road. This winding route is mostly less than three meters wide, against a sheer drop of 600m where the road was cut into the mountains in the 1930s.

Mudslides, rocks, and fog loom from above, while there might always be a rogue cyclist coming at you round the next bend. Plus, it’s the only place in Bolivia where cars must drive on the left – a safety measure (so you can see the edge of the road), but hardly reassuring. Thankfully, with 200-300 perishing here each year, Bolivian authorities built a safer alternative route, and Death Road is now reserved for thrill-seekers. 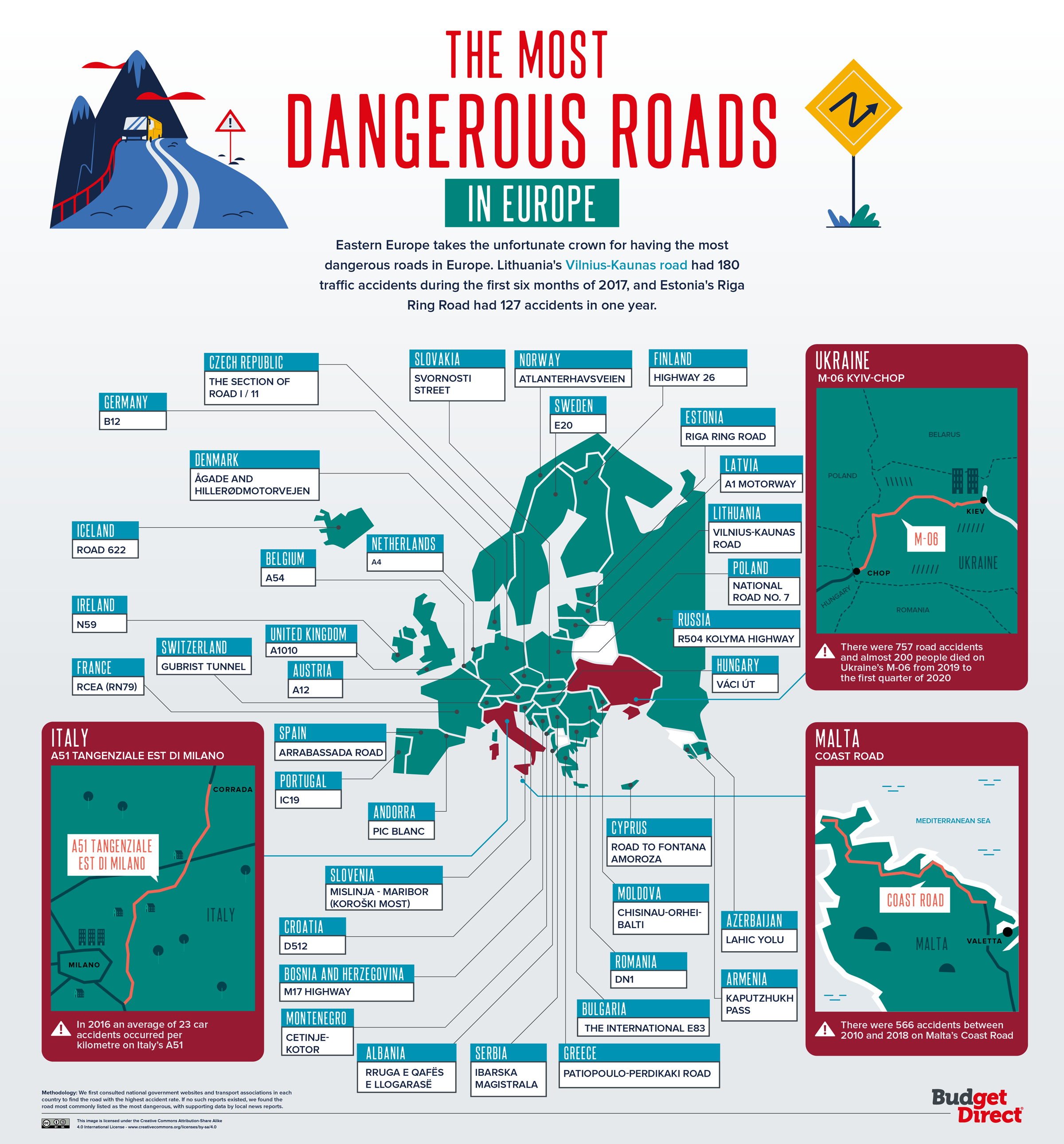 Route 622 along the Northwestern Icelandic coast is like something out of a mythological world. Cliffs lurk over you, the Dýrafjördur and Arnarfjördur fjords lick at your wheels, and the weather gets so extreme that the road is closed altogether for half the year. And that’s just when you’re moving – break down in the middle of nowhere and you’ll find no human life and no phone signal to call for help.

Over half of the UK’s most dangerous roads pass through London. And the worst of all is reckoned to be the A1010 from Tottenham to Waltham Cross, with a rate of 12.7 accidents per one million vehicle-miles driven – nearly nine times the national average. 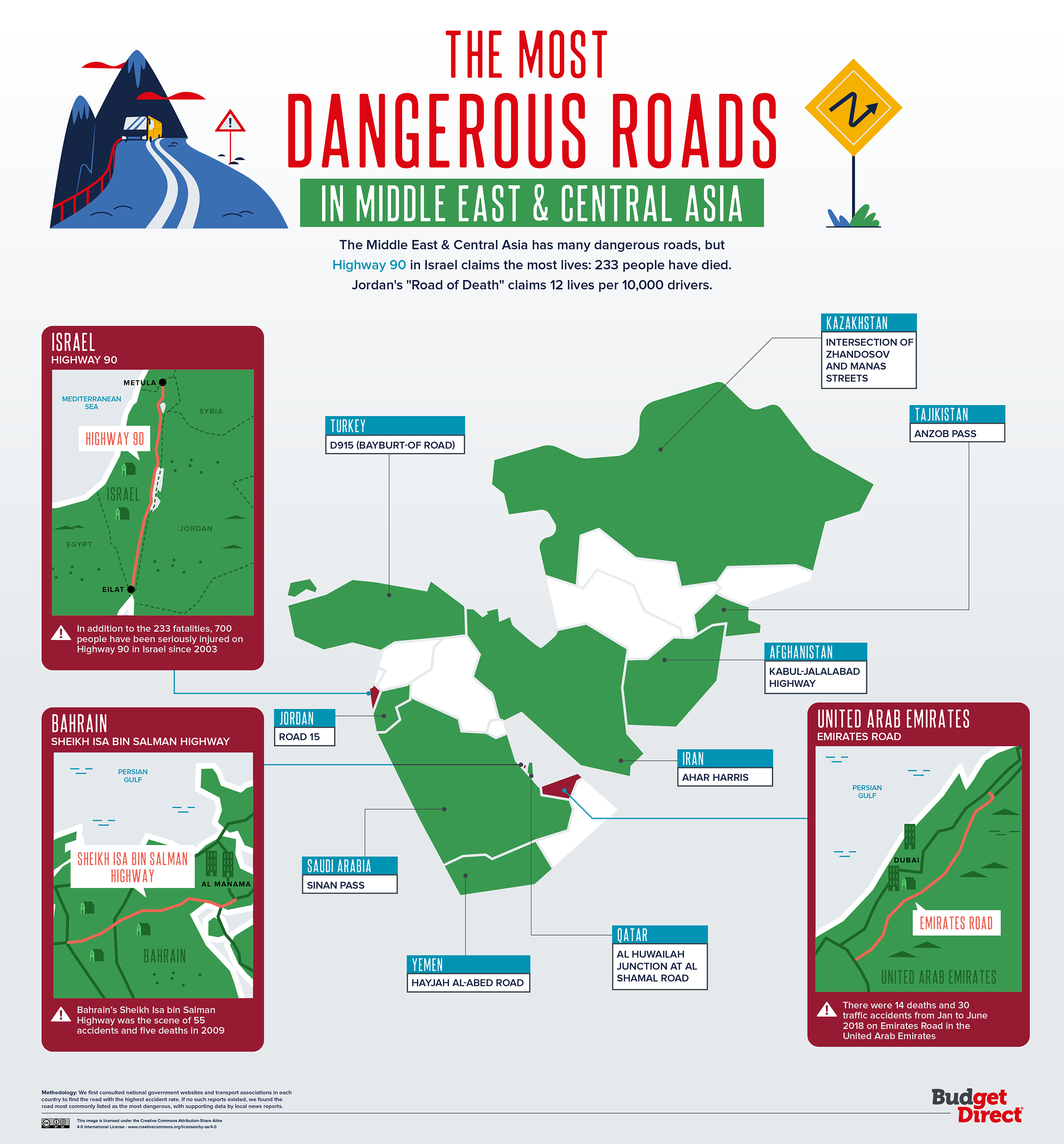 Another road with death in the name: Dead Sea Highway, part of Israel’s Highway 90, is named after its locality, but the name reflects the danger. During one two-week period in 2018, 17 people died here. The road is low, bleak, and old; the newest part built in the 1960s. The lanes are busy, with no barriers between left and right. A casual mistake that you might walk away from on another road will more likely prove fatal on the 90.

“Highway 90 continues to claim lives as a result of poor infrastructure, which is unforgiving to human error,” says Erez Kita, the head of a safe-driving NGO. “It’s a 50-years-old road, and its infrastructure should have been upgraded. It’s always easiest to blame the drivers, but not every mistake should end in death, and the infrastructure is meant to protect drivers even if they make a mistake.” 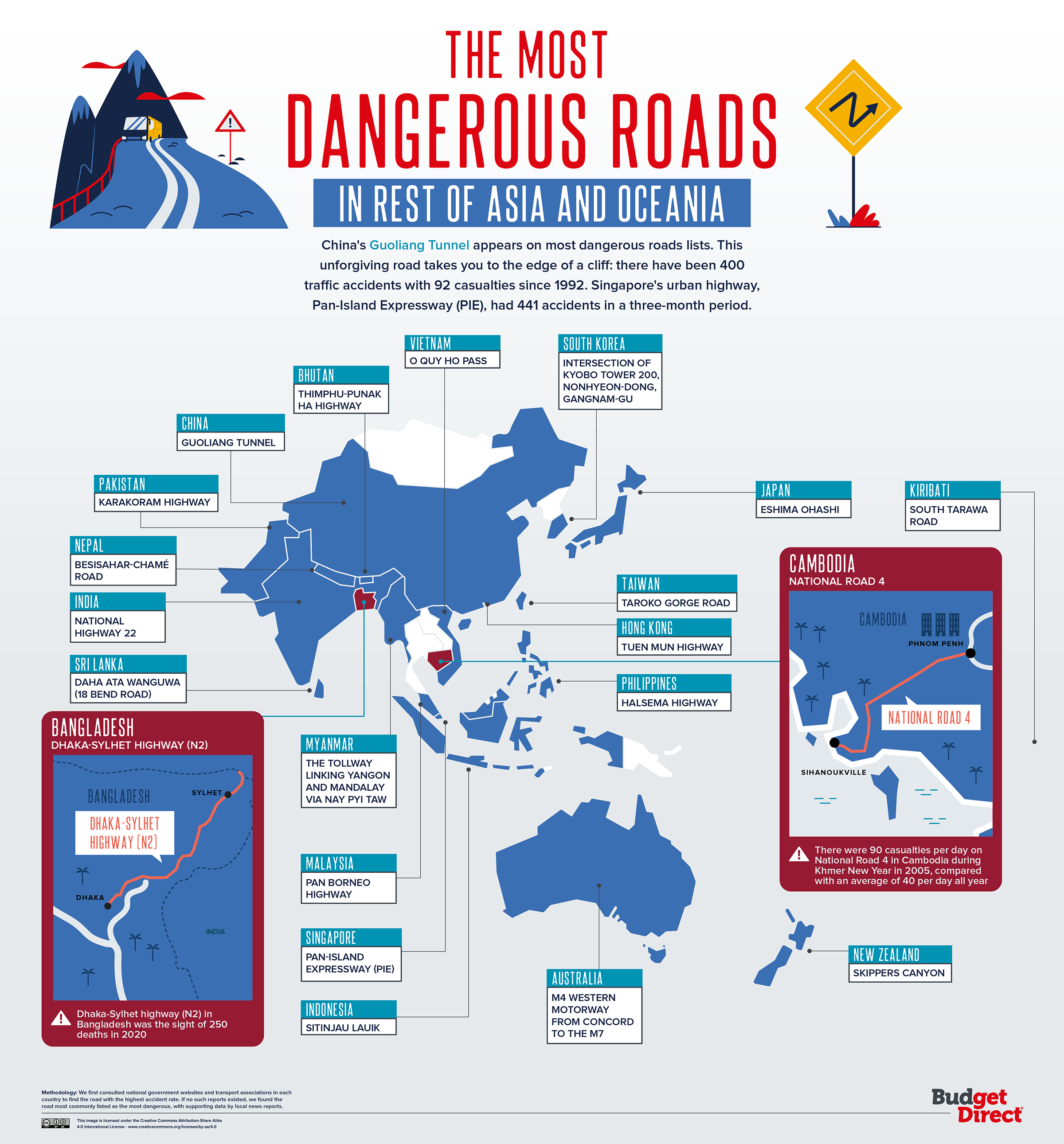 One hundred people die on Australian roads every month, with 2,500 or more seriously injured. The worst spot is the M4 Western Motorway from Concord to the M7 in Sydney. Around 94,000 vehicles drive this 24km stretch every day. It saw six deaths and 788 ‘casualty crashes’ in a five-year period, making it the ‘highest risk’ area – although the Hume Motorway/Freeway has the greatest overall number of crashes involving death or injury.

In 2020, 250 people died on the Dhaka-Sylhet highway (N2), out of 6,686 road deaths across Bangladesh. “There aren’t separate lanes on the Sylhet-Dhaka Highway to facilitate two-way traffic,” says the president of the Sylhet Road Transport Owners’ Workers’ Union. “The road doesn’t have a divider but has traffic from both directions, which is absurd. On top of that, the highway is very narrow.” However, police blame ‘overtaking, overloading, over speeding, and overconfidence.’ 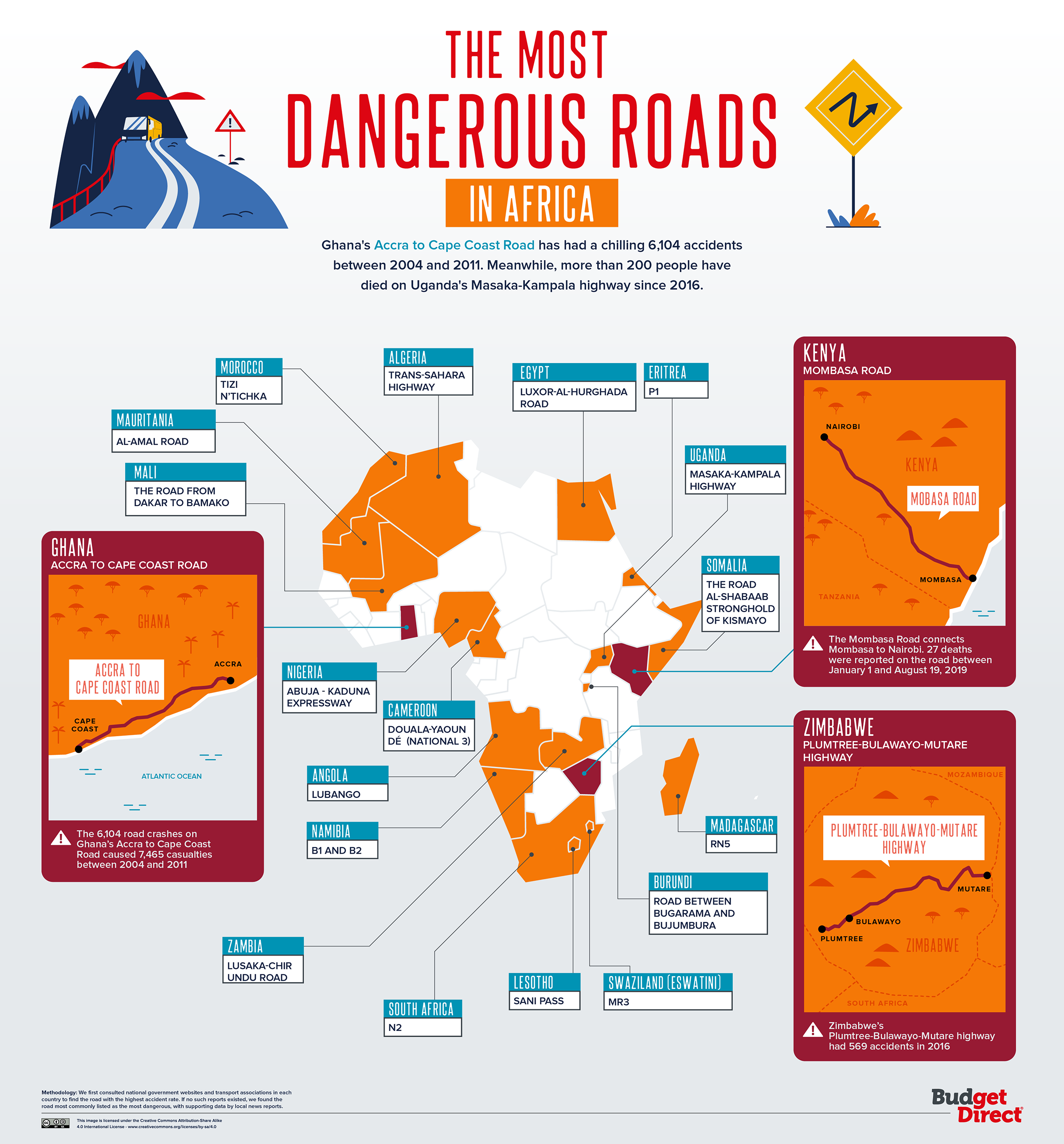 The names of the dead are commemorated on plaques where accidents took their lives on Cameroon’s Douala-Yaoundé road (National 3). Nearly one-third of the country’s 3,000 annual accidents occur on this road. The United Nations classified the National 3 as one of the most dangerous roads in the world in 2014.

In just an eight-month period of 2019, 27 people died on the Mombasa Road to Nairobi, Kenya. During this period, 2,181 people died in total from road crashes across Kenya – and 839 of these were pedestrians. The National Transport and Safety Authority (NTSA) found that the tuk-tuk was the vehicle least likely to be involved in an accident.

Look at our Data

The development of smart road networks and self-driving cars may make the roads safer over the forthcoming years. But their distribution will be uneven, and some countries will always have more dangerous roads than others. Ultimate responsibility falls to us each in our personal and professional capacities as motorists, politicians, and citizens to do our part in keeping the roads safe for our families and everyone around us.

For a look at the data on the most deadly road in every country, check out our interactive table below.

We enlisted Neomam to consult national government websites and transport associations in each country to find the roads with the highest accident rates on our behalf.   Where no such reports existed, Neomam found the road most commonly listed as the most dangerous, with supporting data, by local news reports and publications.

Bendix, A. (2019). 7 of the most dangerous roads in the world. businessinsider.com

Bonnici, J. (2020). CONFIRMED: Coast Road Is The Most Dangerous Road In Malta. lovinmalta.com

Dubai OFW. (n.d.). 5 Most Dangerous Roads in the UAE. dubaiofw.com

Duhalde, F. (2017). The Most Dangerous Routes to Travel in Argentina. carburando.com

Economic Times. (2017). Five most dangerous roads of the world. economictimes.indiatimes.com

Lopez, J. (2017). What are the most deadly roads in the country due to accidents? historico.elsalvador.com

Metro Ecuador. (2020). The Alóag-Santo Domingo is one of the most dangerous roads in Ecuador. metroecuador.com.ec

Rivera, L.  (2017). IMAGES: These are the most dangerous roads in Honduras. oncenoticias.hn

Rodriguez, C. (2021). 10 Of The Most Dangerous Roads In The Mexican Republic. webfleet.com

Ruya News. (2016). Learn about the 10 most dangerous roads in Jordan..A photo report. royanews.tv

The Economic Times. (2017). Five most dangerous roads of the world. economictimes.indiatimes.com

The Local. (2017). The most dangerous road in Italy is a motorway near Milan. thelocal.it

Tiks, J. & Plukk, A. (2020). INTERACTIVE SCHEDULE Three reasons why the Riga Ring Road in Tartu is the most dangerous intersection in Estonia and one reason why Tammsaare Road is even more dangerous.  delfi.ee.

Visicom. (n.d.). A map of the most dangerous roads in Ukraine has appeared. api.visicom.ua

Withnall, A. (2016). Uganda’s Masaka-Kampala highway: Is this the world’s most dangerous road? independent.co.uk