New research has revealed forced annual leave impacts a majority of surveyed Australians, while many also felt too restricted to use all their leave.

Permanent full-time Australian workers are entitled to four weeks of paid leave per year. On a global scale, this means we rank pretty highly, putting us on par with Italy, Germany, Switzerland, Ireland and New Zealand, all of whom offer employees 20 days of paid annual leave. In fact, we’re only beaten by a handful of European countries, such as Sweden, France, Austria and Denmark, where employees are entitled to 25 days of paid leave annually.

Despite this, Australian workers seem more reluctant than ever to actually take their leave. The Australian Centre For Future Work found that, in 2015, Australians failed to use 48 million days of leave, worth $11.1 billion.1 Additionally, 2.4 million Australians have gone more than one year without taking any leave whatsoever, with 86% of these experiencing work burnout as a result.2 So, why are we leaving so much leave on the table?

According to a new survey conducted by Budget Direct, which used a sample size of 1,000 employees weighted to be representative of Australian adults aged 18+, guilt; having too much work to do; not getting your leave request approved; and forced annual leave all contribute to this growing issue, with 53.8% of surveyed employees saying work commitments restrict their ability to take annual leave.

Do you feel restricted by work commitments for when you can take annual leave?

More than half said work commitments get in the way of taking annual leave. While Fair Work Australia stipulates employers cannot “unreasonably refuse”4 annual leave, this is a tricky situation, as employees may feel too restricted to even apply for annual leave to begin with.

A closer inspection of the results reveals women are more likely to feel restricted by work commitments than men, with 57% of women surveyed feeling restricted, compared to 50% of men. The OECD ranks Australia 21st out of 38 member countries for gender inequality among employees who work very long hours (50+ per week), meaning Australian women are more likely than men to feel pressured to work very long hours to stay on top of their workloads. With this in mind, it’s little surprise that female employees feel more restricted by work commitments than their male colleagues.3

Thankfully, there’s good news too: the problem improves somewhat with age. A huge 61.8% of surveyed 25-34 year olds said work commitments restricted when they could take leave. One explanation for this is that people in this age group are more likely to be starting out in their careers and are therefore eager to demonstrate their dedication and work ethic by not taking too much leave. On the other hand, only 49% of those surveyed in the 45-54 age group felt restricted, proving seniority has its perks.

Employees in the Northern Territory and South Australia felt more restricted than others, with 70% and 61.4% of people surveyed in these locations saying work commitments restricted their ability to take leave. At the other end of the scale, Tasmania leads the way with just 42.9% of surveyed employees feeling restricted.

These results tie in closely with how much leave we’re actually taking, with fewer than half of those surveyed (48.5%) taking their full allocation of paid annual leave last year.

Last year, did you take all the paid holiday days you earned?

While there’s no law that stipulates Australian workers must take their full allotment of paid leave every year, we all know the benefits of a well-timed holiday. Sometimes, returning to work refreshed, relaxed, and reinvigorated can be just what you needed. In fact, studies5 have shown that for every 10 hours of leave taken, employee performance improved by 8% in their subsequent performance review.

Unfortunately, Aussie workers seem to feel too restricted to take advantage of this. Once again, the gender divide is evident: only 44.4% of women surveyed took all of their annual leave last year, compared to 52.6% of men.

35-44 year olds were the only age group where more than half (57.2%) of surveyed employees took all of their paid leave last year. By this age, it’s likely that employees will be well settled into their careers, allowing them the freedom to take all of their leave. People in this age group are also likely to have families and young children, so it’s possible they wanted to take all of their leave to spend extra time with their families, take care of their children, and avoid missing important milestones.

Actually, nearly half of Australians surveyed (49.6%) are planning to do exactly this, saying they were saving their leave for future use. This sentiment was shared pretty evenly between demographics. Who doesn’t like a nice, long holiday, after all?

More concerning, however, are some of the other reasons why Australians didn’t take their full allotment of leave - with guilt featuring prominently.

What was the main reason for not taking your annual leave days last year? 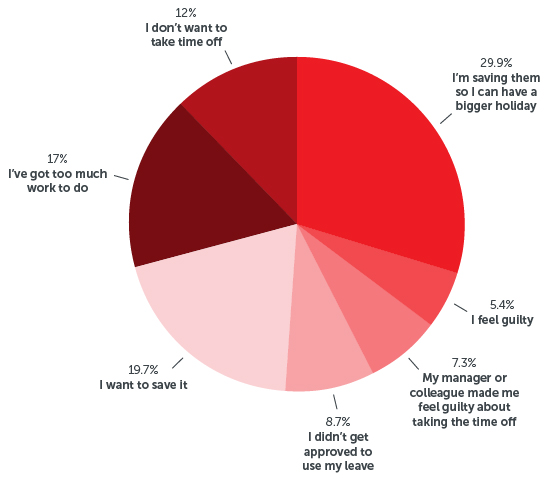 Just over 1 in 5 (21.4%) surveyed said they either felt guilty about taking leave, were made to feel guilty by a manager or colleague, or didn’t get their leave approved. The reasons for this guilt could be manifold, with potential explanations being that employees felt guilty leaving their workload to be covered by colleagues, worried about the amount of work they’d have to catch up on when they returned, or even worried their bosses would punish them in some way for taking leave.

Once again, guilt and unapproved leave was far more common among women than men, with over a quarter (26.8%) of women surveyed experiencing this, compared to just 14.9% of men. Younger workers were also vulnerable, with 29.3% of surveyed 18- 24 year olds experiencing guilt or unapproved leave. This figure halved to just 15.6% among 45-54 year olds.

Tasmania and New South Wales had the highest percentages of unapproved leave, with 16.7% and 13.5% of surveyed employees respectively, while Victoria led the way in this regard with only 3.4% not having their leave requests approved. Given all Australian states are governed by the same annual leave laws, there’s no particular reason that this should be the case, although it may make you seriously consider clicking ‘Apply’ the next time you see an ad for your dream job in Melbourne.

Yet, regardless of how overworked you are or how desperately you want to save all of your annual leave for that dream trip, forced annual leave is a reality that 51.5% of surveyed Australians had to contend with.

Have you ever had to take forced leave (e.g. Christmas Shutdown?)

Location had little impact on forced leave requirements. QLD and the Northern Territory were the only areas where less than half of those surveyed were forced to take leave, with 48.7% and 30% respectively. The quantity of leave that workers were forced to take didn’t vary greatly between genders, ages, or locations, suggesting it’s an issue most Australian workers have to deal with.

This survey was conducted by Pure Profile on behalf of Budget Direct in October 2018. All figures are from this research unless stated otherwise. The survey was conducted online with a total sample size of 1,000 weighted and representative of all Australian adults (aged 18+).

Holiday Maximiser
Expert tips for sustainable tourism
Is forced annual leave impacting your holiday plans?
The majority of surveyed Aussies check work emails on holiday
Which industry has the best work life balance in Australia?
Work life balance by job level in Australia
Are you making the most of your frequent flyer rewards?
Is contact with work disrupting your holidays?
Is 4 weeks annual leave enough? Most surveyed Aussies don’t think so
Half of surveyed Australians work on holiday

Get a travel insurance quote online