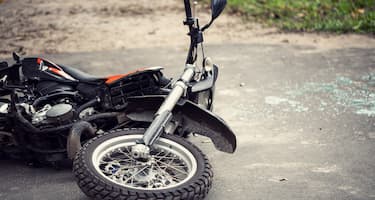 View the latest statistics on motorcycle accidents, as well as Australian perceptions of motorcycle safety in Budget Direct’s latest survey.

While motorcycle fatalities have been trending downwards in recent years, a lack of understanding from motorists continues to impact riders’ safety and increase their risk while on the road.

To help understand the impact of motorcycle accidents as well as Australians perceptions of motorcycle safety, we have compiled the latest laws, government statistics, and our survey data to bring you:

In Australia, motorcyclists, and their passengers (including sidecar passengers) are required to wear an approved helmet that complies with Australian (AS1698 or AS/NZ1698) or European standards (UN ECE 22.05 or 22.06), with a label or mark on the outside of the helmet indicating compliance with the standard.[1]

Helmet visors and goggles are the only forms of adequate protection from the weather, insects, and stones thrown up by other vehicles. Under Australian standard (AS1609), all visors and goggles should be shatterproof, equipped with clear lenses for use at night, and clean and unscratched.[2]

In Queensland, the Government recommends that motorcycle jackets, gloves, pants, and boots should all conform to European Standards and carry a ‘CE’ symbol. However, they are not legal requirements.[1]

1.2. Guide to lane filtering and splitting

Lane filtering is when a motorcycle rider moves past stationary or slow-moving vehicles safely at a speed of 30km/h or less.

Lane splitting is when a rider moves past vehicles at an unsafe speed of more than 30km/h.

Read our guide on Motorcycle lane filtering to learn more.

The Australian Government has released detailed accounts of all motorcycle fatalities from 2011 until the end of 2020.[3]

Here’s the purpose of each road type:

The 40–64-year-old age group had the highest number of fatalities, peaking in 2016 with 119 motorcycle fatalities in one year. Motorcycle crashes involving riders over 40 are more likely to occur in non-urban or regional locations where there are higher levels of leisure or recreation.[4]

New South Wales consistently experienced the highest number of motorcycle fatalities out of all states from 2011-2020.

As the highest-ranking LGA, Brisbane is a high-risk area for vulnerable riders. As a metropolitan area riders under 40 are more likely to experience motorcycle fatalities due to higher levels of daily commuting.[4]

3.2. Do you know the difference between lane splitting and filtering?

Conversely, those who responded as not owning a motorcycle were far less likely to know the difference between the two motorcycle manoeuvres.

3.4. Where do you think most motorcycle accidents occur?

These responses align with government data (as seen in 2.2) where the highest number of motorcycle fatalities occurred on local roads, followed by high-capacity arterial roads (urban main roads).

It seems that male respondents (30.9%) are also far more concerned about suburban streets than female respondents (21.2%). While motorcyclists are more worried about highways (29.5%) than main roads (27.3%), probably due to the high risk they pose to vulnerable drivers.

3.5. Which of the following Personal Protective Equipment do you think is legally required for motorcyclists to wear?

There seemed to be some uncertainty around other PPE. In contrast, most motorcyclists surveyed still feel that all of these protective elements are still required.

Female respondents are far more likely to think that added PPE is legally required than their male counterparts. This may be because women tend to be more risk-averse than men.

Out of all the states Tasmanians have the most conservative views around PPE, with the highest safety expectations.

3.6. Which age group do you think are most at risk of having a motorcycle accident?

All age groups came to the consensus that 18–24-year old’s are most at risk of having a motorcycle accident.

3.7. Which of the following statements do you agree with?

The data shows that there’s a correlation between the age of the respondent and their tolerance of motorcyclists. This may be due to older generations’ frustration at loud revving from motorcycles and lane filtering, especially during congested traffic.

3.8. What frustrates you the most about motorcyclists?

*Respondents could select more than one option, meaning answers may not add up to 100%.

Older Australians aged 55-64 seem to be the most frustrated by lane filtering. Lane filtering remains the second most common annoyance for those without motorcycles, even though only 24.5% of these people know what it is (seen in section 3.2).

Motorcyclists, on the other hand, are most annoyed by dangerous behaviours from other riders that are directed towards motorists.

Disclaimer:This survey was conducted by Pure Profile on behalf of Budget Direct in October 2021. The survey was conducted online with a total sample size of 1,000. All other data on this website is the latest available from the named sources in this references above and was obtained in November 2021. Auto & General Services Pty Ltd does not guarantee the accuracy or completeness of the data and accepts no liability whatsoever arising from or connected in any way to the use or reliance upon this data.