The earliest motorcycle started life as a Pierre Michaux pedal bicycle fitted with a Louis-Guillaume Perreaux steam engine. The result is the Michaux-Perreaux steam velocipede invented between 1867 to 1871. Since then, the design evolution of modern bikes we know today has basically adhered to the same basic formula: Two wheels (occasionally three or four), an engine underneath the seat, and a smiling rider straddling the handlebars on top.

However, there are a few iconic motorcycle designs that withstood the test of time. We cherry-picked five of the longest-running bike models in motorcycling history, each with its unique set of characteristic design traits. Next, we took a long and hard look at specific changes to both the mechanical components and the design of each model. It not only gave us some insight into the early beginnings of each bike, but it also gave us a new perspective on what to expect from future models.

German industrial giant BMW was in a conundrum at the end of WW1. The Treaty of Versailles means BMW is prohibited from manufacturing aircraft engines. Instead, BMW shifted its efforts to producing small, commercial engines. BMW merged with Bayerische Flugzeugwerke in 1922 and came up with the first BMW R 32 motorbike a year after. The R 32 was most innovative with its wet sump oiling system, a unique shaft drive system mounted to a three-speed manual gearbox, and an air-cooled, transversely mounted flat-twin petrol motor.

In 1938, the BMW R 61 ditched its hardtail design in favour of plunger shocks for a smoother ride. The R 51 also came with a long swing arm suspension unit with oil pressure shock absorbers. Around 1969, the BMW R 60/5 became a dual-seat machine. It wasn’t until 2016 when the R name was revived as a proper sport-touring bike in the R 1200 RS and RT. The latest R 18 model harks back to the original R32 with a low-slung single-seat configuration. 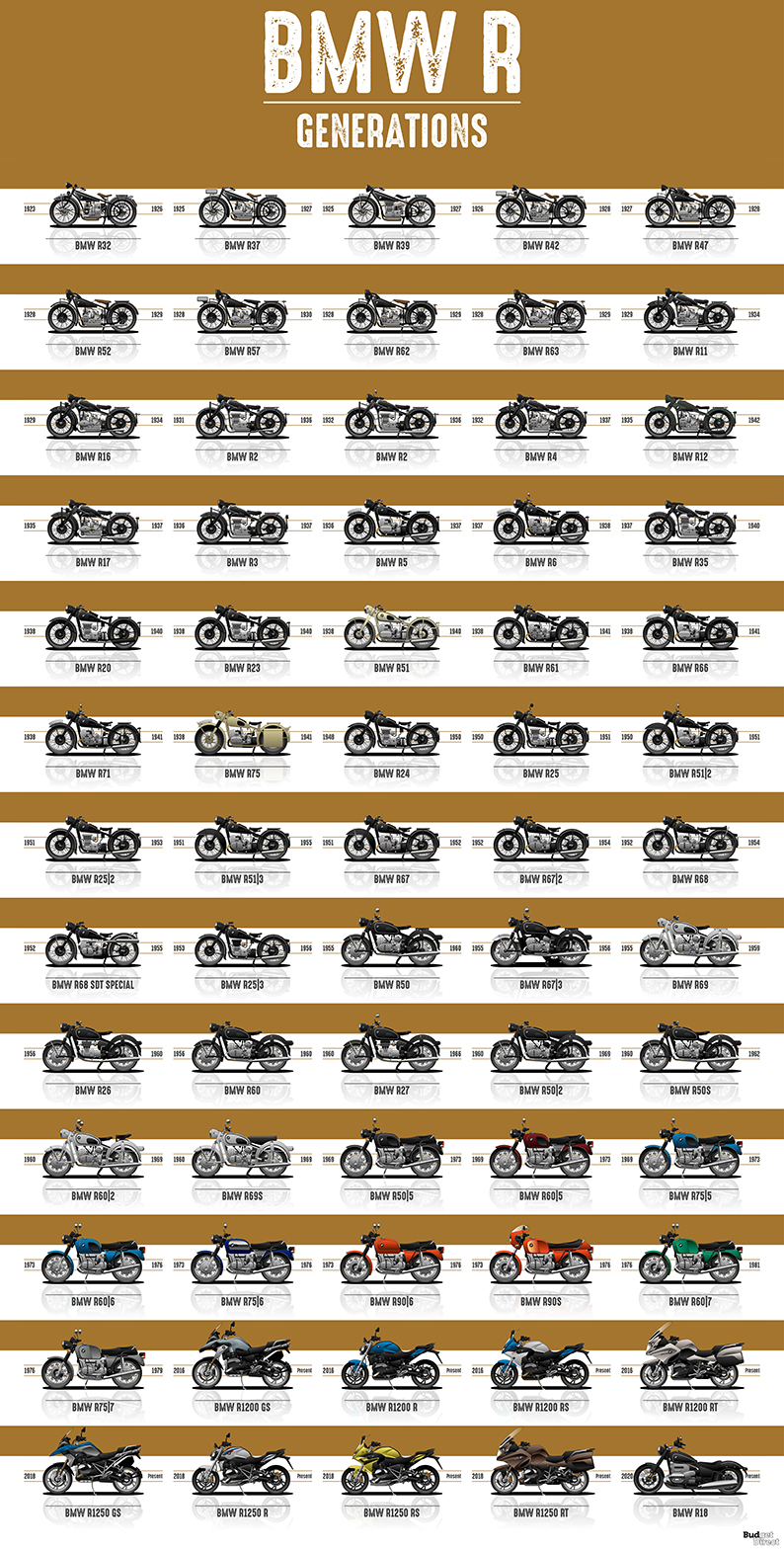 Honda motorcycles traditionally came with transverse inline-four motors like in the CB750, which is renowned in history as the original Universal Japanese Motorcycle. Nobody saw Honda coming with the VF and VFR series in 1986. Instead of having an inline-four, the VF and VFR came with a V4 motor, but it was a rough beginning. Early models had problems with the camshafts, and Honda acted quickly by installing gear-driven OHC cams on the first-gen VFR 750 in 1986.

The Honda VFR was originally designed to go head-to-head with the Yamaha FZ750 and Suzuki GSXR-R750 sports bikes. However, the 1990 VFR 750F established it as Honda’s premiere sport-touring bike. The Honda VFR’s first major redesign came in 1990 with a new frame, wider wheels, and narrower tail with its single-sided swingarm design. Meanwhile, the 1994 VFR 750 had new brakes, a slightly different riding position, a new adjustable rear shock absorber.

In 1998, the Honda VFR 800F entered the market with a 235 kph (146 mph) top speed. And by the year 2000, the VFR800FI Interceptor was lording it over lesser-endowed sport touring bikes with its aerodynamic shape, ABS brakes, and fuel-injected motor. Honda’s proprietary VTEC valvetrain saw action in the 2001 VFR800 Interceptor. VTEC operates two valves per cylinder at under 7,000 rpm. The system engages two additional valves per cylinder as the engine revs higher. This same technology is inherent in the current VFR800X but with better low-end torque and a new 4-2-1-1 exhaust system. 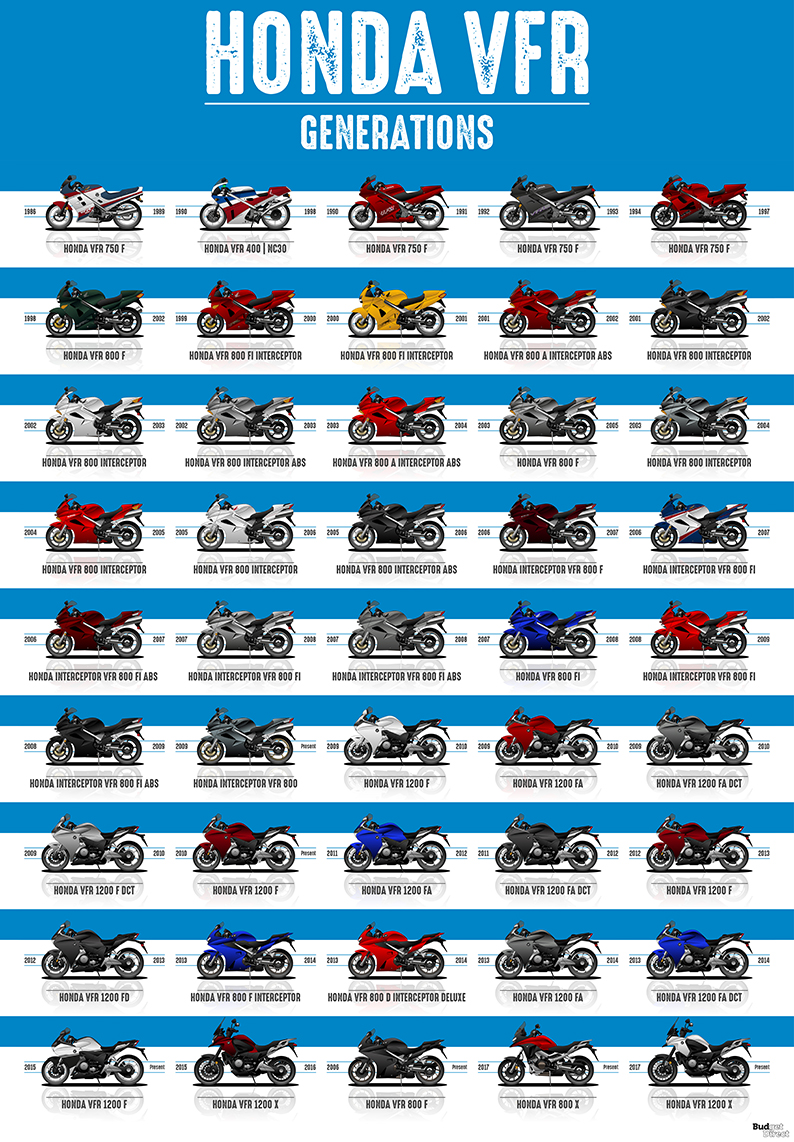 The original Indian Chief was introduced in 1922 and was based on the Powerplus/Standard. But the Big Chief garnered most of the attention in 1923 with its bigger engine. Also, the Big Chief became the most powerful and fastest motorcycle with a 90 mph top speed. Originally intended for sidecar applications, the Big Chief became a popular choice for solo riders with its large fenders, hardtail rear suspension, and pulled-back handlebars.

It wasn’t until 1940 when the Indian Chief grew larger fenders and a modified frame to accommodate a plunger rear suspension. But in 1953, the Indian Motorcycle Manufacturing company declared bankruptcy, and the last Chief made by Indian was released in the same year. The Indian Chief was consequently sold in various iterations by different organizations since then. It came with a host of new innovations including modern five-speed transmissions, four-stroke motors, and more horsepower for each iteration.

Polaris Industries purchased Indian Motorcycles in 2011 and consequently released the Indian Chief Vintage and Chief Dark Horse in 2012. The Indian Chief Classic debuted in 2015 with nostalgic styling elements (including those trademarked decorative fenders) and modern features like ABS brakes and cruise control.

The Yamaha YZF 750 came in standard R and single-seat homologation SP models, but the former was the only YZF model to arrive in North America. The original 1993 YZF 750R came with a 749 cc inline four-cylinder engine producing 120 horsepower. It also has a 6-speed sequential transmission. It wasn’t until 1996 when the YZF gained a proper 1,000 cc engine in the 1000R Thunderace or T-Ace.

The Yamaha YZF-R1 came in 1998 and quickly became the sports bike to beat, which the Suzuki GSX-R1000 Hayabusa managed to do in 2001. The YZF-R1 superbike came back in 2002 and had a smoother 20-valve inline-four engine, while the YZF-R6 conquered the middleweight division in 2003 with its new frame architecture. The year 2005 marks the third-generation R1, and Yamaha came up with the YZF 1000 R1 MOTOGP Replica with 180 horsepower.

Italian motorcycle manufacturer Aprilia was established by Alberto Beggio after World War II in 1945. But it wasn’t until 1984 when the company unveiled its first multi-character off-road bike in the ETX 125. It had an 18-horsepower 124 cc two-stroke motor and came with a 35mm telescopic front fork, racing livery, and a single rear shock absorber.

Two years after, the ETX 350 arrived with a 26-horsepower 349 cc air-cooled engine and five-speed manual transmission. The smaller ETX 125 is geared towards novice riders while the larger ETX 350 is meant for seasoned off-roaders. Through the years, Aprilia’s ETX series had few minor changes to its rugged design.

However, the current ETX 150 features a full redesign and an all-new chassis. It now has a sleeker look but retains the aggressive off-road capabilities of its predecessors with standard knobby tires, high mudguards, and a SOHC 149 cc four-stroke motor with a five-speed gearbox. 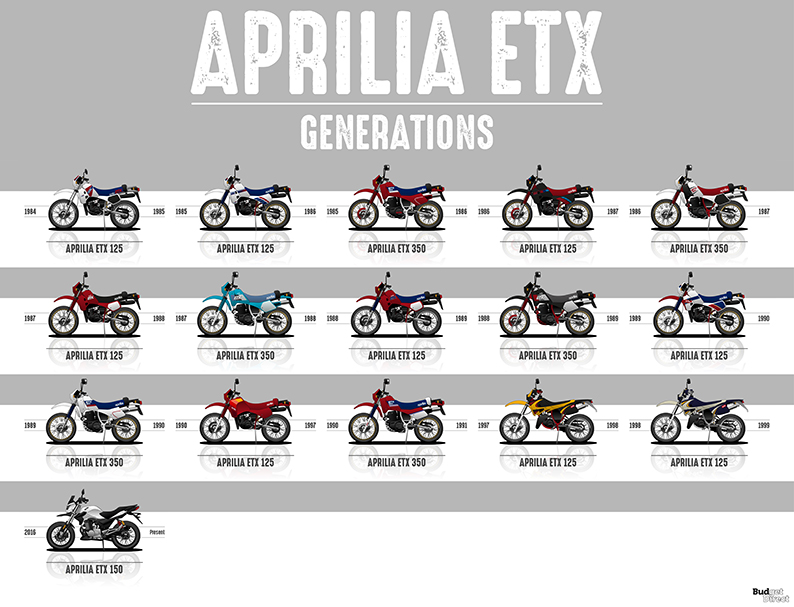 Despite having vintage-inspired body styles, new motorcycles have evolved greatly in terms of safety and performance features, lightweight materials, and new technology. Similar to new cars, the design evolution of these five motorcycles are prime examples of how bike manufacturers are looking to the future by respecting the past.