Supercars and superbikes go together like tea and biscuits, and many automakers periodically dabble in the motorcycling world. BMW, for instance, has not abandoned its two-wheeled roots, and Japanese carmakers Honda and Suzuki – purveyors of Japanese ‘Kei cars’ and global compact vehicles – are well known for making the fastest motorbikes on the planet.

This gave us an idea: what if seven supercar makers made superbikes? What if Ferrari made a superbike that is not a Ducati, or what if Christian von Koenigsegg suddenly woke up and made a Swedish version of the Suzuki ‘Hayabusa’ GSX1300R?

Here’s what we came up with.

If you’re not aware, Aston Martin and Brough Superior have created the astonishing AMB-001 superbike. Only 100 units will exist, and it inspired us to concoct a superbike version of the Aston Martin Valhalla hypercar. The Valhalla is the third car to debut under a partnership between Aston and Red Bull Advanced Technologies. And unlike its Valkyrie brethren, the Valhalla is a genuine road car.

Our Aston superbike has a one-piece, painted carbon-fibre upper body sporting the Valhalla’s aggressive grille shape and headlights. Meanwhile, the front and rear fenders are exposed carbon-fibre. The wheels are lifted directly from the Valhalla, while the side skirts are a direct nod to Aston’s most highly anticipated supercar to date. 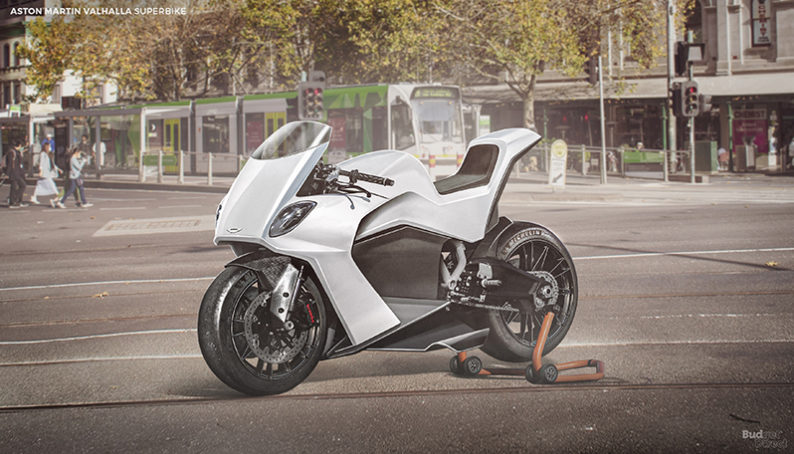 The F8 Tributo is the most potent V8-powered Ferrari in the carmaker’s long and illustrious history. It also has the most powerful V8 engine in a non-special series Ferrari.  Our F8 Tributo superbike has sharper headlights, a rakish windshield, and elegant side panels. Those star-shaped katana wheels were directly inspired by the actual car, while the F8 Tributo’s aggressive rear end is reinterpreted to form the bike’s seat and rear fender.

Aerodynamics plays a crucial role in a high-performance superbike, and our F8 superbike delivers. The side panels in front of the seat are responsible for routing cooling air to the engine and exhaust, while the spear-shaped silhouette seemingly pierces the oncoming air to smoothen the airflow. Bella moto! 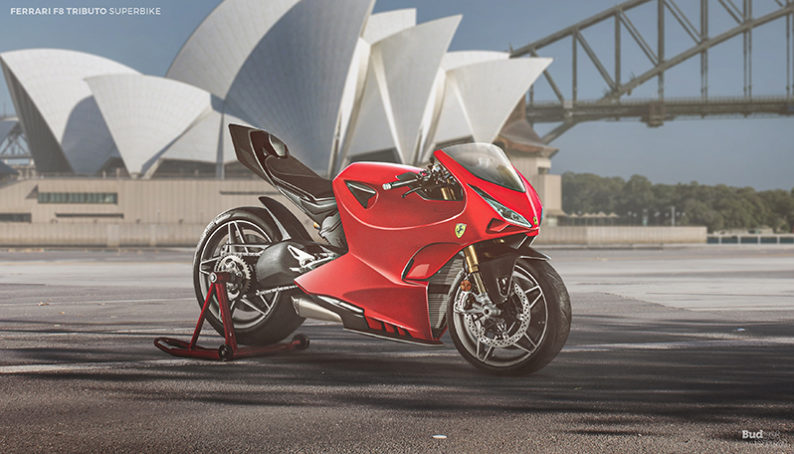 Jesko Absolut is the fastest car Koenigsegg will ever build, and Christian von Koenigsegg has put it succinctly that the company will ‘never endeavour to make a faster series-production road car, ever.’ Our Jesko Absolut is all about speed. For instance, the design adopts the slim headlights and front clip of the actual car, while the body’s general shape is angled to keep the bike from flying off the road. Speaking of flying, check out those sinister double fin spoilers in the rear.

And of course, no Koenigsegg should exit the Ängelholm factory without the Ghost badge, this time sitting neatly in the fuel tank. Unlike the hypercar version, our Jesko Absolut superbike has no removable roof for obvious reasons. But with aero-style rear wheels and a sleek Swedish vibe, you can bet the house it’ll go like stink. 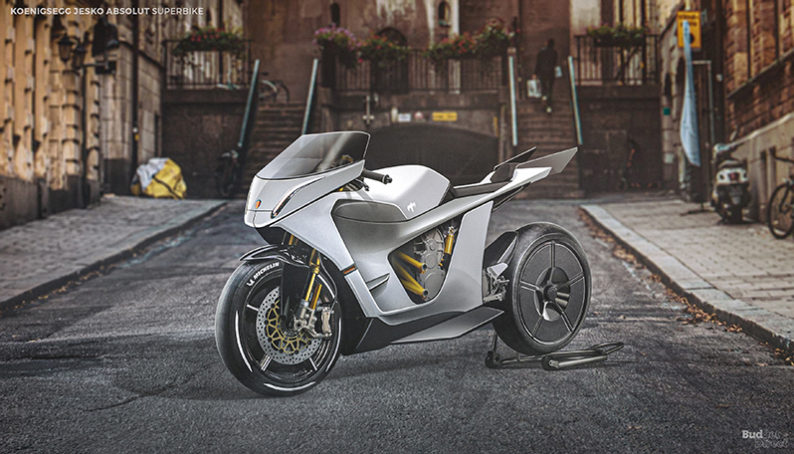 The Veneno is one of the ultimate Lamborghini poster cars. Created to commemorate Lamborghini’s 50th anniversary, only three Venenos are in existence and cost $4.6-million each. Underneath its wild and futuristic bodywork are the bones and beating heart of an Aventador, which essentially means our Veneno superbike is also a two-wheeled Aventador on steroids.

It has a pointy, conical nose and sharp boomerang headlights like in the production car. Fancy detailing includes red exterior trim, a futuristic front fork, and striping detail running from the front panel to below the seat – the latter is rendered in the green, white, and red colours of the Italian flag. 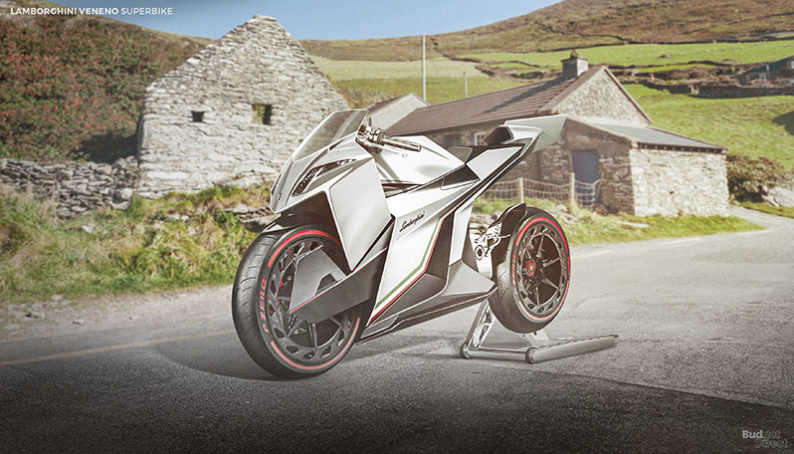 It’s hard to argue with a supercar named after the best Formula One driver ever to live. Ayrton Senna is larger than life, and it’s the same deal with McLaren’s Senna. McLaren calls it the ultimate road-legal track car, and it’s a potent track weapon in the hands of an experienced driver.  This philosophy is evident in our Senna superbike.

The front nose and headlights bear a striking resemblance to the Senna’s front clip, while the exposed front suspension elements are a nod to the road car’s mechanical aesthetics. And like the Senna supercar, our Senna superbike has exposed side glass panels to view those geeky engine and suspension bits underneath. It takes a while to sink in, but the innovative technical details (inverted brake calipers, side-mounted exhaust tips, etc.) are ready for primetime racing. 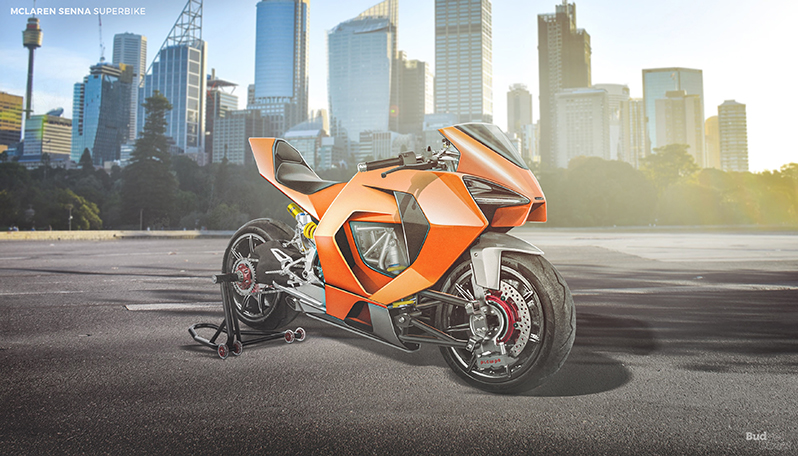 The Pagani Huayra is a love letter to dyed-in-the-wool driving enthusiasts. Huayra blends timeless Italian styling, materials quality, engineering, and craftsmanship with a Mercedes-AMG 6.0-liter V12 and manual transmission. The Huayra is a cacophony of noise, speed, leather, and carbon-fibre, all of which are the primary inspiration for our Huayra superbike.

The one-piece body panel is crafted from exposed carbon-fibre, while the gold wheels are a direct nod to the Huayra supercar. And while it may seem impractical at first, no Huayra superbike should have less than four exhaust outlets to unleash all those unburnt gasses. 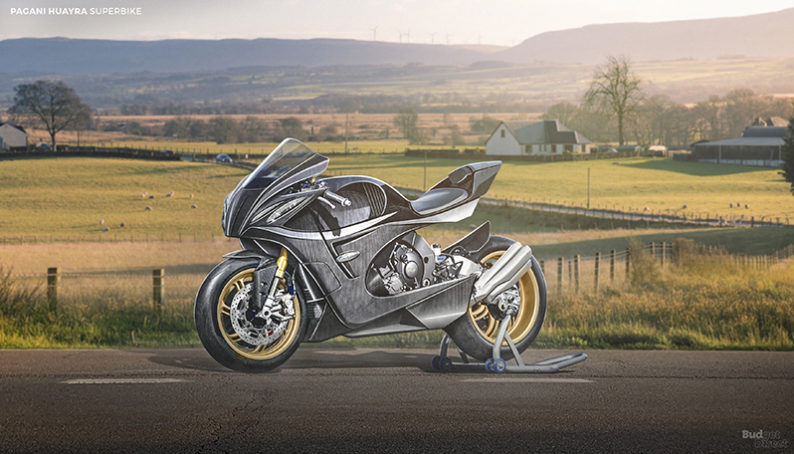 The Porsche 918 is nothing less of a technological masterpiece. But for all its strong performance credentials, the 918 remains unmistakably a Porsche in the style department. For our 918 superbike, we melded the design credentials of an old-school café racer with the 918’s iconic shape, and what came out made us hold our breaths.

We didn’t want to make it look like a touring bike with large twin headlamps, so we gave it a single headlight unit with the same four LED markers in a production 918 supercar. The aero-design wheels are what you’ll find in the 918, as well, while the upward-pointing twin exhaust tips pay homage to the actual car’s tailpipes. 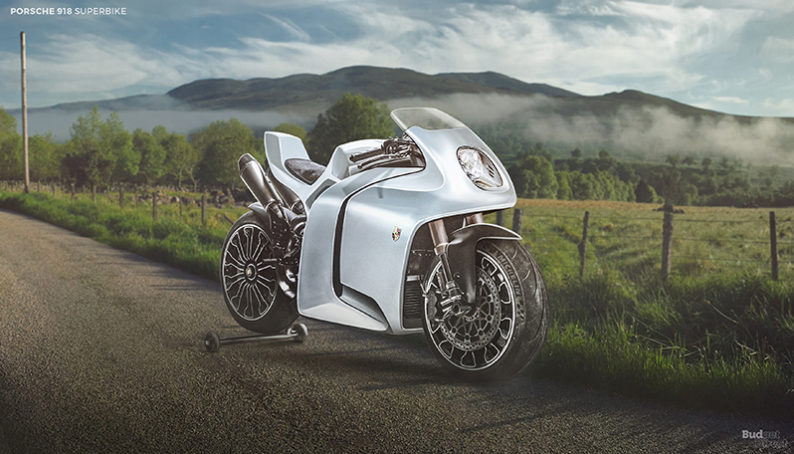 The Future of Superbikes?

It’s not difficult to transition from four-wheels to two in the styling department. But if these seven supercar makers did make superbikes, the most exciting part is powertrain technology. Will the bikes have state-of-the-art valveless engines or gas-electric propulsion like its four-wheeled forebearers?

The future of superbikes is looking bright, indeed.

Bali travel guide: everything you need to know