Electric car sales in Australia are the highest they’ve ever been but are still far below the average international electric car market sales.

Since the introduction of the first electric car, the General Motors EV1, in 1996, electric cars have seen tremendous technological advances and a rise in popularity. The first viable electric car became available for purchase in 2008 with Tesla Motors. The Roadster was an all electric vehicle using lithium-ion battery cells. Electric car sales in Australia only started to gain traction from 2011 onwards coinciding with electric car model availability.

Number of vehicles sold in Australia 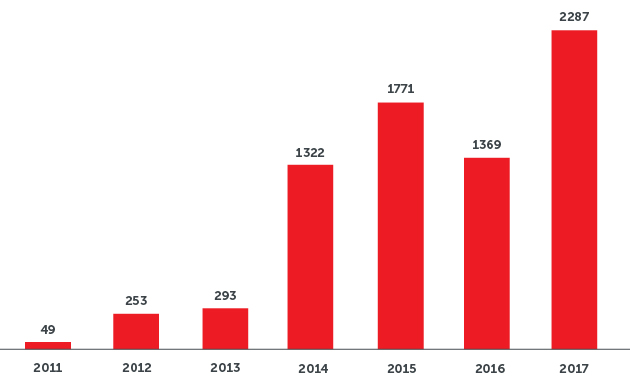 Victoria has the highest numbers of electric car ownership across the country with 1324 vehicles bought from 2011-2017, closely followed by NSW with 1,238 vehicles in the same time period.

Australia ranks very low internationally when comparing the total percentage that electric cars make up of total cars on the road. The three main factors that influence electric vehicle uptake in a country are consumer demand, pricing and incentives put in place by the countries government.

When it comes to the percentage that electric vehicles make up of the total vehicle fleet in Australia, the results have been underwhelming compared to global leaders such as Norway and the USA. Of the 36 OECD (Organisation for Economic Cooperation and Development) countries, 32 of them have higher sales rates for electric vehicles than Australia. The only countries with lower electric vehicles sales rates were Mexico, Chile and Turkey which are classified as emerging economies4.

Total percentage of electric cars on the road

Why Australia is lagging behind

The slow adoption of electric vehicles in Australia could be attributed to the lack of Government policies and monetary incentives rolled out in comparison to other countries. 30.9% of respondents in a consumer survey undertaken in 2018 said that they would be more willing to purchase an electric vehicle if there was more support, incentives and infrastructure in place.

Australian Parliament passed new regulations in December 2018 regarding the importation of vehicles Australia that will come into effect in December 2019 and will likely see more electric cars on Australian roads from 2020 onwards. The have made changes to the previous criteria for importing cars via the Specialist and Enthusiast Vehicle Scheme (SEVS). Now the only criteria are that the cars to be imported can not have been on sale in Australia, have been on sale for more than three months overseas and that the cars offer an ‘environmental performance significantly superior to mainstream vehicles in Australia’.

In 2018 there were 783 charging locations available, equating to roughly one charging station for every six electric vehicles.

Number of charging stations by state

With the lack of monetary incentives for the public looking to purchase an electric car, the price point on the available models can act as a barrier to average Australians. It is the higher priced electric cars that are showing the greatest growth in the Australian market, indicating that people are primarily interested in electric vehicles as luxury vehicles. 19 of the 23 available electric models are priced at over $60,000, when the average car cost in Australia is $27,9943. 35.5% of respondents in a consumer survey undertaken in 2018 said they would be willing to buy an electric vehicle if they were the same price as petrol or diesel options.

Another contributing factor could also be the lack of vehicle models available in Australia. There are a number of new models soon to become available within Australia which could potentially see electric vehicle ownership increase.

From 2018 there are 9 new models of electric cars planned for release: