The average funeral in Australia can cost between $4000 for a basic cremation to around $15,000 for an extravagant affair complete with casket, burial and flowers. Because of the many customisable elements in a funeral there are no fixed or set prices(1).

Funeral costs can be broken down into several main items: funeral director fees, transport, a coffin, death certificate, permits, burial/cremation, a cemetery plot, and additional expenses such as flowers [2].

When asked, the average Australian expected to pay between $4000 and $7000 for a funeral. In 2016 the Australian funeral industry was worth approximately $1 billion. The industry is dominated by InvoCare, a listed company with a 40% market share, mainly concentrated on the east coast[3].

Funerals in Australia are often sold as bundles rather than separate items, making it hard to know what the money is actually going towards. Given that the average person is judged to be in a vulnerable emotional state when organising a funeral, there has been considerable public demand for greater transparency for funeral costs.

Cost of cremation vs burial 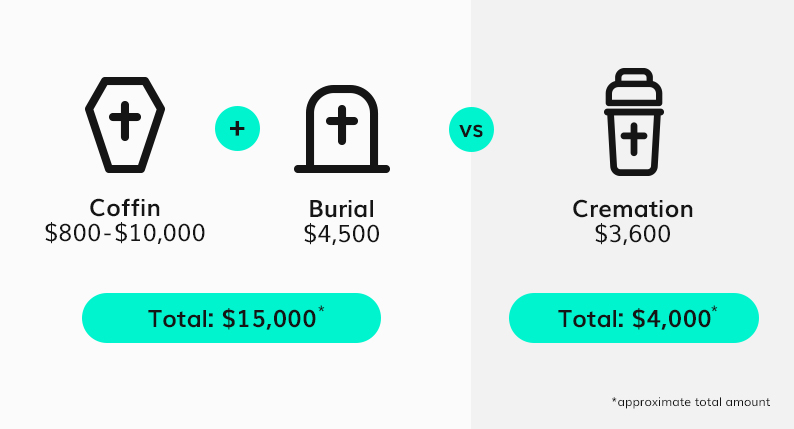 Studies have found that 66% of Australians would select cremation over burial when planning their own funeral. In contrast, only 20% would select burial over cremation, while 14% have no preference [4]. Given cremation is preferred by two in three Australians, it’s natural to wonder: how much does cremation cost in Australia?

The average cost of cremation in Australia is approximately $3,600, whereas the average cost of a burial is approximately $4,500 (excluding funeral coffin prices, which can cost up to $10,000) [5]. As such, cremation is typically cheaper than burial in Australia, though prices can vary substantially. While cost isn’t the only consideration, it is important to weigh up the cost of cremation vs burial when planning a funeral.

Cremation costs generally include use of the crematorium facilities and staff labour during the cremation. You may pay more to receive the ashes in an urn and keep them in a niche or wall; it costs you nothing to scatter the ashes.

A 2016 report showed that Professional Services Fees (also known as Director fees) accounted for up to 39% of the revenue generated by funeral companies. However, Director fees were considered by the NSW Parliamentary Inquiry to be the least transparent cost associated with funerals.

Coffins and caskets make up 31% of total funeral costs, but reports show that the mark-up pricing can be considerable to offset other areas of the business.

Average cost of a burial plot in Australia

Additionally, a simple memorial plaque can cost between $1500 and $3500, though some cemeteries might include this in the cost of a burial plot [5].

These prices don’t usually include labour costs for opening and closing the grave or ongoing upkeep.

Funeral directors charge a fee for professional services, namely the time they spend:

This is typically a set fee billed to you in advance.

The variation in funeral coffin prices comes down to the quality and detail of the coffin. Thankfully coffins are also one of the easiest parts of a funeral to personalise, as you can decide based on personal tastes as well as cost considerations.

The personal touches are the things one remembers at a funeral or a wake. The flowers, the service booklet, framed photographs, and video projections – maybe even balloons or complimentary champagne – are the things that can define a funeral. But they are all likely to cost money.

Of course, you can always make choices based on your budget. You can stick to simple flower arrangements, for example. Or you can request everyone bring their favourite photo of the deceased and clip them onto pieces of string.

As a parting celebration, you want a funeral to be memorable. You want it to capture that person’s life and personality, to elicit a smile from your guests at the mention of a fond memory, and to touch the hearts of all who attend to commemorate and commiserate.

Funerals are a tricky business. You want to show the full extent of your love and the depths of your grief for your lost loved one. You want to throw a celebration the deceased would be proud of. And that can make you inclined to celebrate their life in style, to go the whole hog, regardless of the costs.

Ultimately, a memorable funeral isn’t about the number of flowers in the chapel or the location of the burial plot. It’s about remembering an amazing life that was lived and coming together to celebrate it.

The average funeral costs by city Handy tips for driving with pets

The Best SUVs in Australia 2020

Simple Spring Cleaning Ideas That Can Transform Your Home