Every movie lover has their “go-to” site to find out whether a film or show is worth watching. And lots of us go back to leave a rating when we’ve watched a contentious picture. But does your review site of choice attract a certain type of fan? Do IMDb-users and Rotten Tomatoes-users prefer different types of movies?

Yes! And it matters. Because if you’re hanging out on the wrong review site, you could be persuaded to skip movies you would have loved – or to sit through a series that really isn’t your sort of thing.

We decided to find out which types of content users of IMDb and Rotten Tomatoes most disagree on. Our researchers compiled a comprehensive list of movie releases from Disney, Marvel, Lucas Films, and Pixar, plus four genres of series from Netflix. We converted the IMDb and Rotten Tomatoes audience ratings for each title into scores out of 100 and calculated the difference for each release.

Then we created a series of snazzy charts to illustrate which movies and series most divide IMDb and Rotten Tomatoes users.

The Top 10 Most Divisive Netflix Shows by Genre

Rotten Tomatoes users love Netflix. We identified the most divisive Netflix series in the genres of action, comedy, crime, and drama. In each case the average score across the genre was higher on Rotten Tomatoes.

Short-lived showbiz-family sitcom All About the Washingtons was rated over 50% higher by Rotten Tomatoes fans – suggesting a dedicated cult of Rev Run fans campaigned to get the show renewed. Likewise, vampire pandemic show V Wars was cancelled after just one series. It has a disinterested 61 from IMDb users, but a near-perfect 96 on Rotten Tomatoes.

Use the arrows to see the most divisive shows in each genre:

The Top 10 Most Divisive Disney Movies

The eighth, oddest Star Wars episode split fans right down the middle – and the same goes between review sites. The Last Jedi is the most divisive Disney movie, with a 43-point slaying on Rotten Tomatoes and 70 points on IMDb.

Oddly, many of the most divisive Disney films are among the studio’s most mediocre pictures. Atlantis: Milo’s Return (2003), Valiant (2005), and Home on the Range (2004) get unimpressed 50-something scores from IMDb fans, but score less than 30 on Rotten Tomatoes. 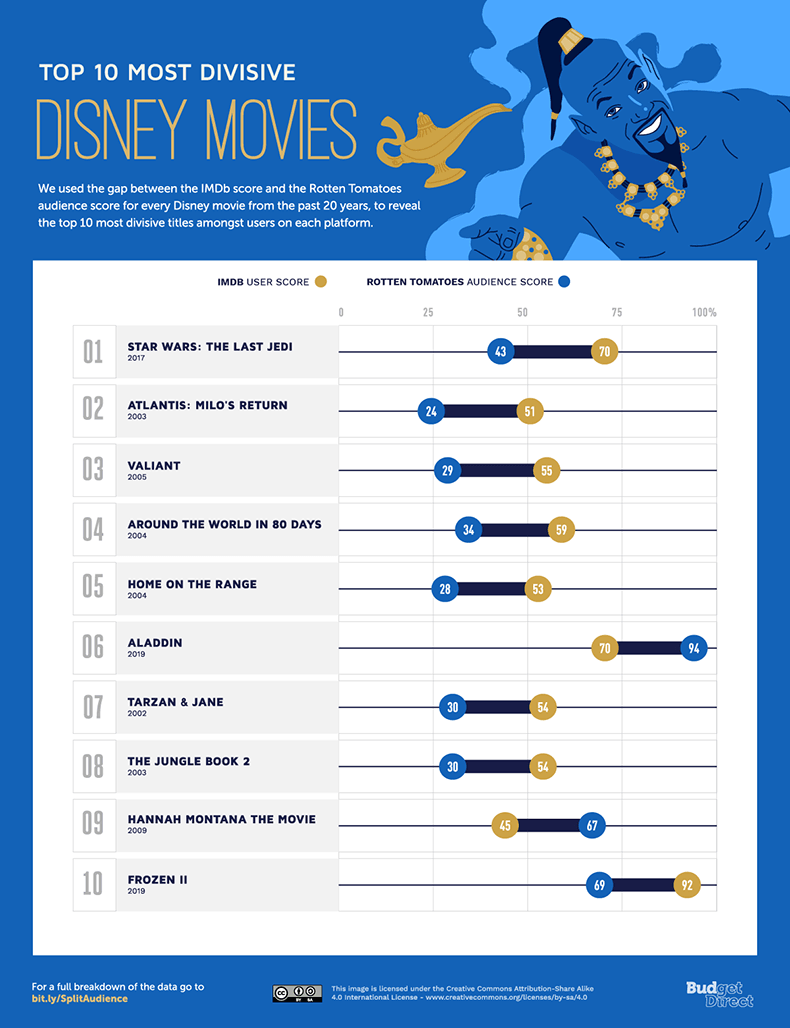 The Most Divisive Marvel Movies

The Marvel pictures that split review site users are all more highly rated on Rotten Tomatoes than IMDb. The exception is the most divisive movie, 2019’s Captain Marvel, downrated to 48 on Rotten Tomatoes compared to 69 on IMDb. Guess some of you guys aren’t ready for female empowerment!

Spider-Man: Far from Home (2019) is the second-most divisive. The ‘schoolboy Spidey’ sequel was the first Spider-Man picture to make a billion dollars. It scores 95 on Rotten Tomatoes – double what users gave Captain Marvel – but just 75 on IMDb. 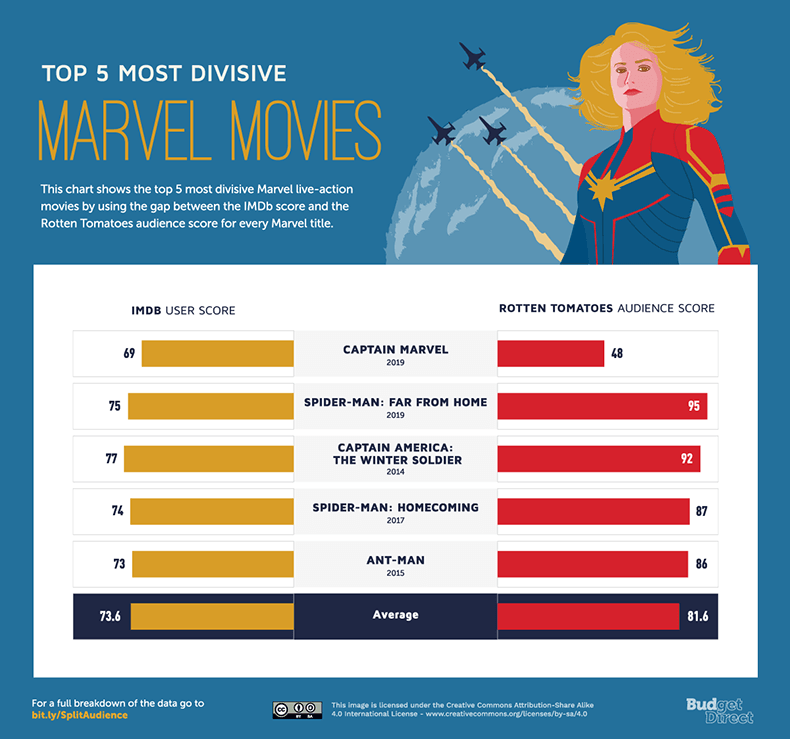 The Most Divisive Pixar Movies

Pixar is the only Disney brand rated, on average, higher on Rotten Tomatoes than on IMDb. However, look at the individual films and it’s a mixed story. Rotten Tomatoes adored Toy Story 4 (2019), giving it 94 points next to a modest 78 from IMDb users.

Cars 2 (2011) sees the pattern reversed: IMDb users offer a so-so 61, Rotten Tomatoes users an unimpressed 49. But in general, the divide over Pixar movies is not huge, with most films well-loved by both sets of audiences.

The Most Divisive Star Wars Movies

A long time ago, in a galaxy far, far away, there are probably people arguing about The Last Jedi. The most contentious picture in the saga dissed the canon too much for Rotten Tomatoes users who gave it just 43 points. IMDb reviewers appreciated Rian Johnson’s fresh ideas, giving TLJ 70%.

The tables turned for the more traditional final episode, with Rotten Tomatoes users giving 86 versus IMDb’s 69. Weirdly, The Empire Strikes Back makes it into the top five most divisive episodes, even though everybody knows it’s the best Star Wars movie – right? 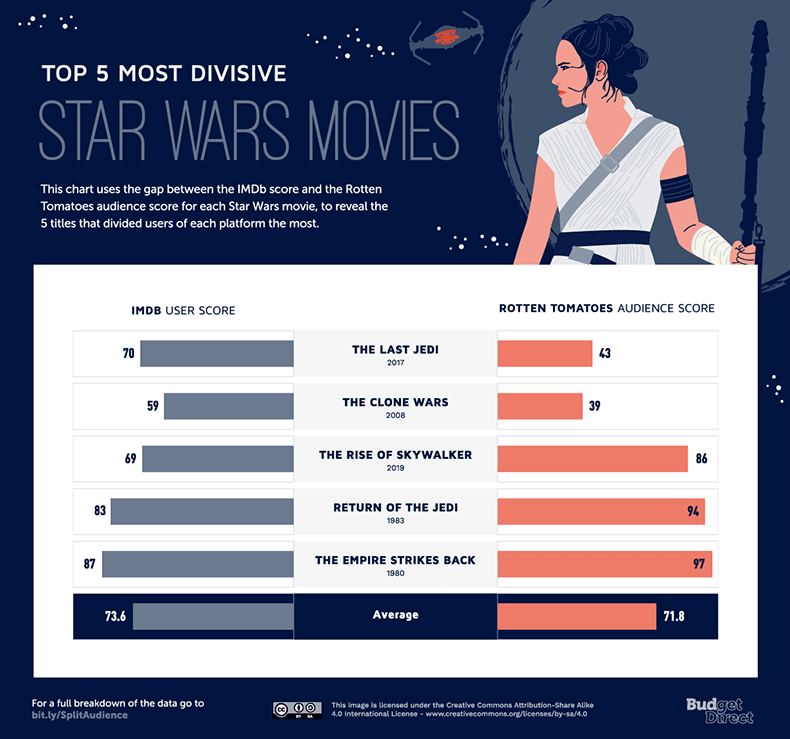 Movie review sites are a complex part of online movie culture. There’s so much more going on than ‘marks out of ten,’ with thriving subcultures, fan disputes, organized up- and down-voting, and opinion-changing conversations taking place. One fan’s meat is another fan’s poison, so it’s always worth taking audience ratings with a pinch of salt!

Still, it helps to know what a website’s users think of films you like or loathe before seeking their opinion on what to watch next. Who do you most agree with over the most divisive films? Are you a Rotten Tomato-thrower or an IMDb opinionist?

See the full data in the tables below.

To make these charts we started by compiling a list of movies using Android Authority‘s list of Disney movies, We included films, animated features, and live shows produced and released by Walt Disney Studios and all its subsidiaries including Marvel Studios, Lucas Films, and Pixar. We then used Flixable, What’s On Netflix, and Rotten Tomatoes to compile a list of Netflix TV series.

For each title (film or series) we took the IMDb rating and Audience Score on Rotten Tomatoes (for TV shows, an average score across seasons was taken). We then converted IMDB ratings to a score out of 100 by multiplying it by 10, so a score of 6.5 became 65 and so on. The Rotten Tomatoes Audience Scores were converted from percentage to a score out of 100. Finally, we subtracted one score from another to get the difference between the scores. The films and TV shows with the largest difference between IMDB score and Rotten Tomatoes score were deemed the most divisive. Films and TV series that didn’t have an audience score available on Rotten Tomatoes were excluded from the dataset. The data was gathered between April 16th and 17th 2020 and can be viewed on bit.ly/SplitAudience.

The world’s most Instagrammed #vanlife locations