Gmail & Hotmail Users on the Road Your job can often sway what you drive. For example, your average tradie is probably going to need something with room for gear, and the strength to match. That means you’ll very rarely see a carpenter pull up in their adorable little hatchback. More often than not, they’ll have opted for something like a ute, with some commercial practicality.

The same goes for the size of your family. If you have 2 grown-ups and 4 kids all living under one roof, the most likely solution will be something with enough seats – rather than needing 2 cars to take the family anywhere.

Those all make sense, but what about something potentially less obvious? Have you ever considered what your email address says about what you drive?

Probably not. But we’ve gone through 10,000 quotes made on the Budget Direct website, and we’ve unlocked what car characteristics Gmail and Hotmail users showed us

Colour of the Car

These aren’t necessarily the most popular colours for Gmail users (those are your average white and black paints). But these are the colours that were definitely preferred to Gmail users, compared to Hotmail users. In fact, a Gmail user was over twice as likely to drive a maroon car than a Hotmail user.

On the other hand, Hotmail users tend to like a little warmth in their car colour. Hotmail users were roughly 50% more likely to drive an orange car than a Gmail user. 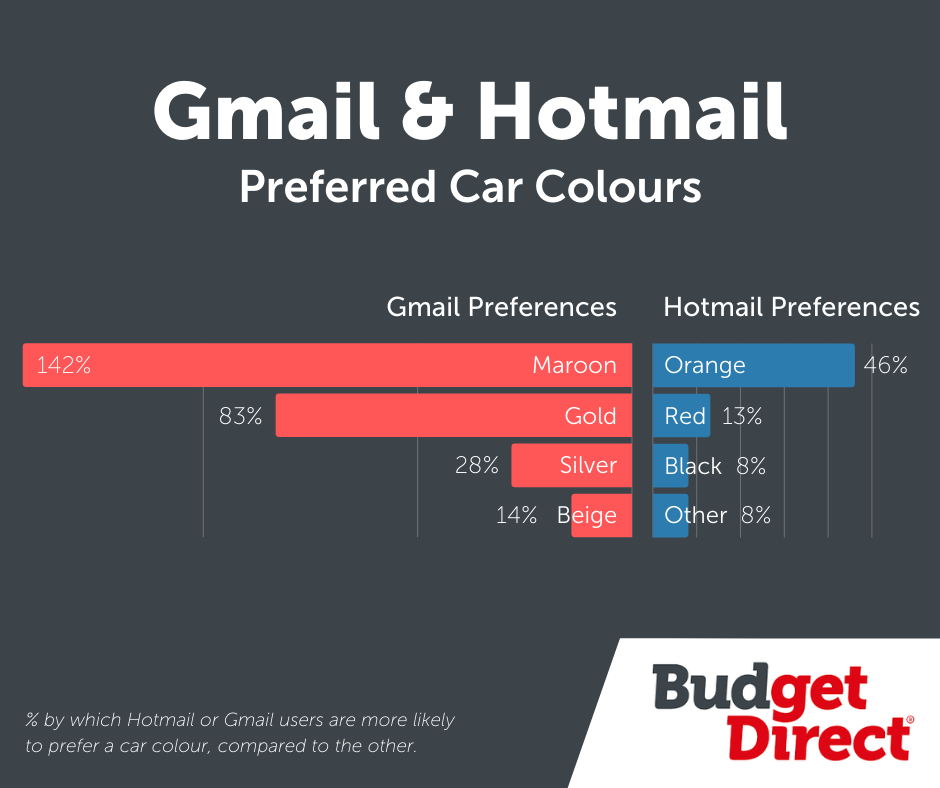 Again, these definitely aren’t the most common cars driven by Hotmail users (that’s your classic blend of Mazdas, Toyotas, and the other most common car makes in Australia). But Alfa Romeo, Citroen and Porsche were the brands that leaned significantly toward Hotmail users.

Gmail users were around twice as likely to drive an Audi, Lexus or Kia than Hotmail users.

In the Middle – Renault, Skoda & Subaru

These 3 brands were almost inseparable – no matter whether you’re a Gmail or Hotmail user, everyone can agree on how popular they are. We wanted to find out if Hotmail or Gmail users were more likely to drive manual cars, or automatic cars. And what we found was so close, we’d prefer to call it a dead heat.

But if we MUST sway one way or the other, Hotmail users are 1% more likely to drive a manual car than Gmail users. It’s so close it barely matters though. 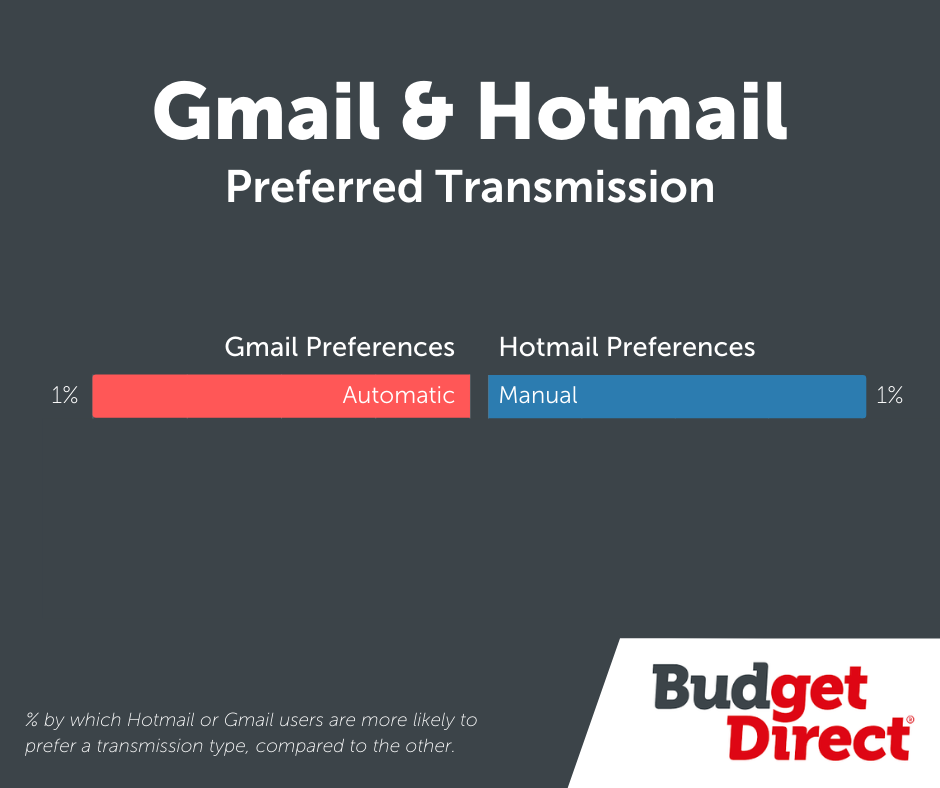 Now, we’re crossing into elements of the drivers, rather than their cars. And one big differentiator was the type of licence held.

In one of the most stunning finds from our quote data, apparently Gmail users are 15x more likely to be on their Learner’s Licence / Permit than someone with a Hotmail.

86% of all Hotmail users were on their Full / Open Australian Licence, and had been for over 2 years. This makes a Hotmail user 19% more likely to hold this licence, when compared to a Gmail user. 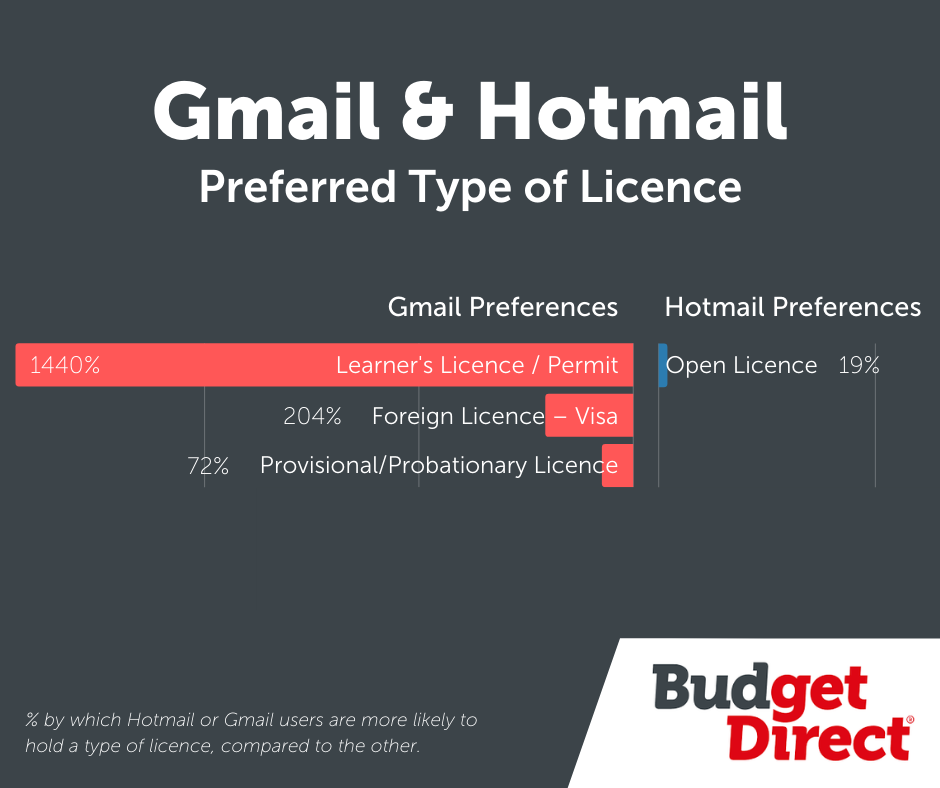 Would you believe it? Email address seems to share a correlation with where we park our car at night. 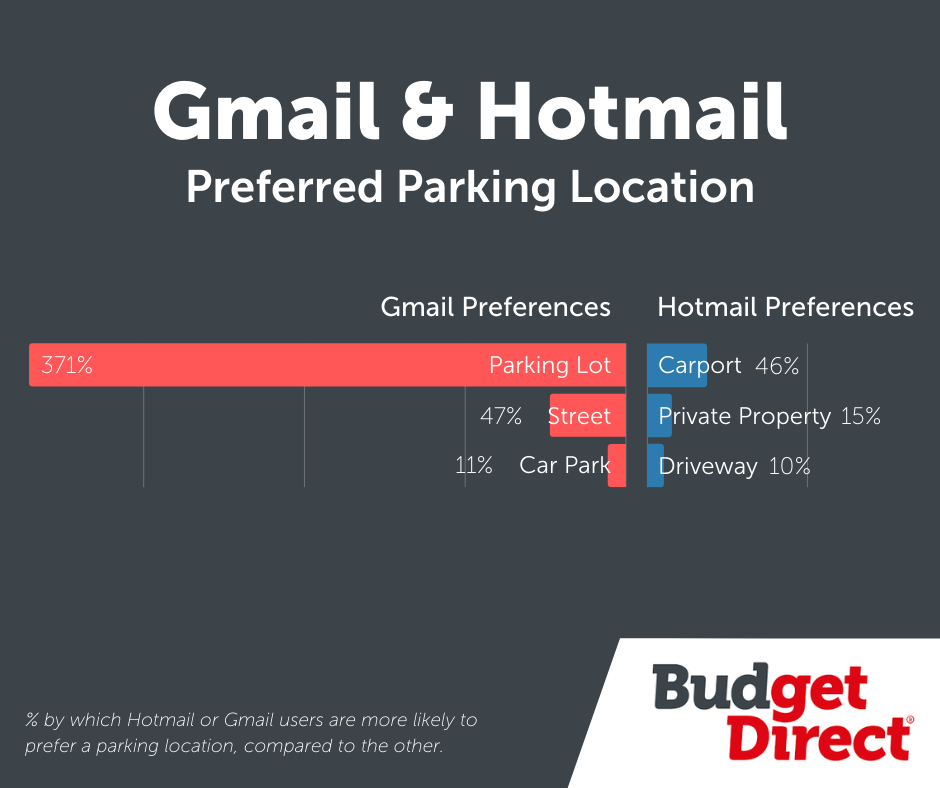 Before we delve too deeply into the gender of drivers, it’s worth noting that we didn’t collect enough data to accurately represent those that identify as non-binary. So for this section, we’ll fall back on the male/female categories with enough responses.

It’s also worth admitting that there were 2.3x more Gmail addresses than Hotmail addresses in all of our data. All we’re really presenting here are the ages/genders that tend to lean further toward Gmail or Hotmail more than the average population.

It probably makes sense, given we found Hotmail users were also the most likely to hold a Full/Open Australian Licence.

Combining everything we learned about Gmail and Hotmail users, we can create the personas that best represent each domain. 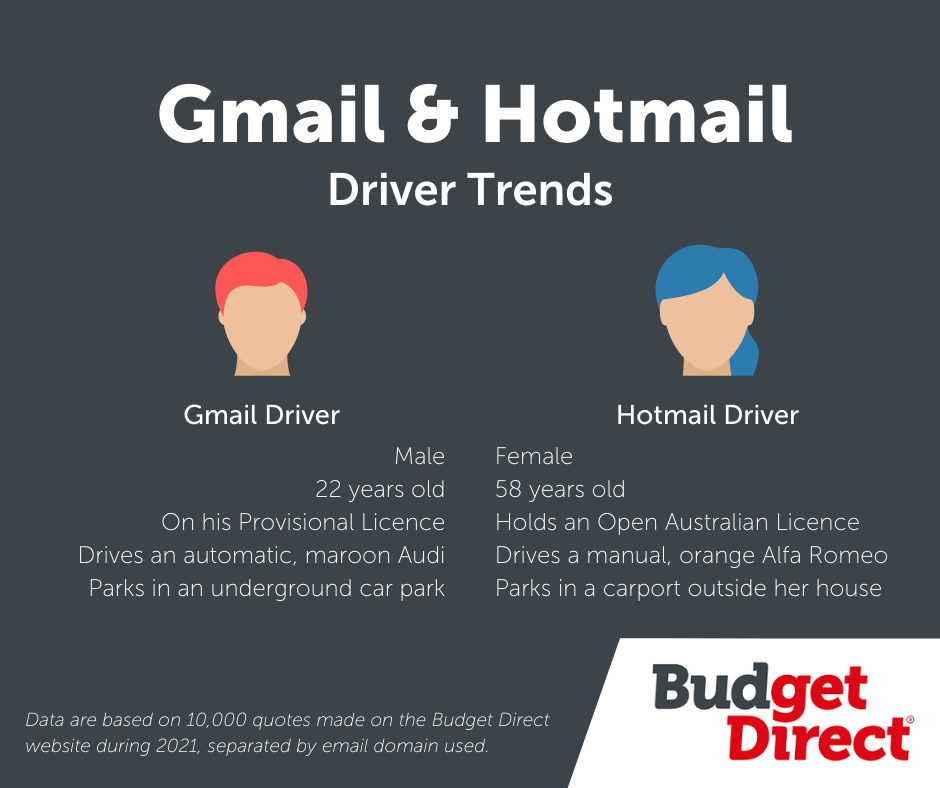 Data from this piece were sourced by studying 10,000 random quotes made on the Budget Direct website, during 2021. While the data included were based on a strong sample size, Auto & General Services Pty Ltd does not guarantee the accuracy or completeness of the data and accepts no liability whatsoever arising from or connected in any way to the use or reliance upon this data.