Bright, bold, and often bizarre bedrooms in animated TV shows are often unlike anything we would see in real life. Animation offers an escape to another world – one that would not be possible if the program-makers had to obey the laws of physics!

But what if it was possible to borrow elements of the animated world and add them to your own home? We took six popular animated TV bedrooms and recreated them as they would look in real life.

Rick and Morty is one of, if not the, most successful animated shows of modern times. Such is the show’s popularity that there are 60+ episodes already in the pipeline. Young and old have fallen head over heels for the brainy sci-fi sitcom that isn’t afraid to fall back on toilet humour.

Morty’s bedroom encapsulates the overactive mind of the typical nerdy teenager. Posters of a bikini-clad model and the concept of magnetism sit geekily next to one of ‘Darth Buddha’ (also available as a statue!). But the childlike decorations are plastered over stained and chipped concrete walls, possibly connoting the darkness that lies underneath Rick and Morty’s adventure. If you want to get a similar look in your own home – it is possible to create your own concrete finish effect without having to knock down and rebuild any walls. 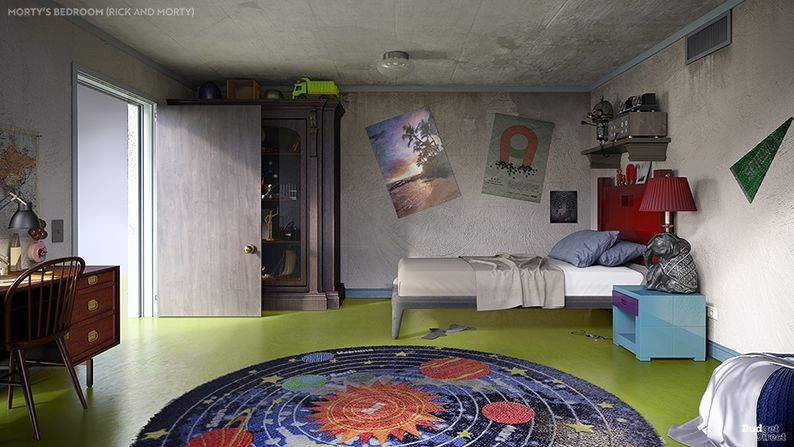 The Belchers are one of those rare things: a functional, mutually-supportive TV family! Eldest daughter Tina is doing her best to navigate the awkward transition from childhood to adolescence. Her bedroom is sophisticated but still retains traces of her youthful passions – horsey posters are only just starting to make way for unthreatening boy bands (with nice butts).

The wooden elements of her room are painted or stained with a colour-scheme that begins with violet quartz. Tina complements the woodwork with pastel lilac bed linen. With a unified colour scheme holding the room together like this, boys and horses don’t seem such a random combo after all. The $13 billion Sailor Moon franchise continues to inspire around the world. This colourful anime began as an adaptation of a shōjo (i.e. aimed at female teens) manga series but is adored by boys too.

Serena Tsukino is a schoolgirl with the power to transform herself into Sailor Moon, leader of the Sailor Soldiers. Her bedroom is bright and pink. It features a traditional Japanese chabudai table where she can kneel on her tatami mat to study or plan. This way of working and living is said to promote a more meditative approach to life. 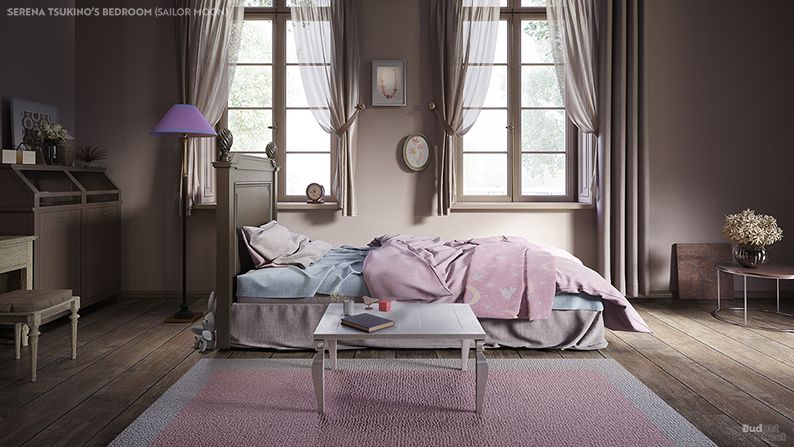 Doug is a wholesome 1990s series about a very normal kid dealing with normal problems. The animation is so universal that it has become an online favourite a quarter of a century later. Doug’s bedroom is appropriately ‘normcore.’ He has a replica World War II public information poster on his wall, and we’ve reinterpreted his pin-up of an imaginary 4-piece band to be the Beatles.

Doug’s teddy bear is also kind of neutral. But his Anglepoise lamp is a design classic. It clips perfectly onto his headboard so that Doug can easily adjust it when reading the many books on his shelves. 5. Glimmer’s Bedroom (She-Ra and the Princesses of Power)

She-Ra is back! The Mahō Shōjo-style (‘magical girls’-themed anime) reboot of the 1980s classic has won over a generation of youngsters and has even been accepted by those who loved She-Ra the first time around. Princess Glimmer of Bright Moon is a leader in She-Ra’s rebellion against Hordak’s evil regime.

Glimmer’s bedroom is striking in its adherence to a deep blue–purple sapphire colour scheme against a relief of gold trim. And that awesome golden staircase leading to the suspended bed! At once regal, modern, and fantastical, this room is the perfect inspiration for any young princess or prince with a sense of adventure. Adventure Time is a modern classic of fantasy animation. It follows a boy named Finn and his best friend, a 28-year-old shape-shifting dog named Jake, on their adventures through the nuclear war-ravaged Land of Ooo. Finn and Jake live in the fabulous, Ghibli-inspired Tree Fort, a multi-storey, multi-canopy hollowed weeping willow.

We’ve preserved the higgledy-piggledy tree-house feel of Finn’s bedroom for our real-life recreation. The room has a giant knotty branch or two running through it, so right-angles are kind of out-of-the-question! Finn’s room actually feels like kind of an eco-statement. Reclaimed wood, up-cycled furniture, and thrift shop appliances all make the ‘Finn look’ attainable for a real-life room, even if the inspiration is otherworldly. 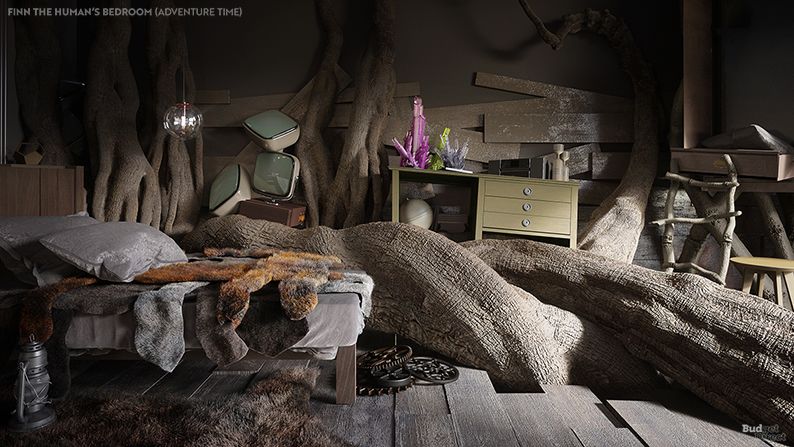 Animated TV bedrooms may seem an unlikely source of home decoration inspiration, but that will just make it all the more impressive when you manage to make it happen. Which animation style would you most like to have in real life?

Iconic landmarks as you’ve never seen them before

The essential guide to travelling alone