Cats: independent, sensuous, keep your house mouse-free, will sit still long enough to be photographed. But your cat doesn’t really love you, and its litter tray is full of mind-warping parasites.

So, which is better – dogs or cats? We wouldn’t want to alienate half the planet by choosing one over the other. But what Budget Direct can do is a bit of science to show whether dogs or cats are more popular.

We counted up every post on Instagram tagged – #ilovedogs, #dogloversclub, or #doglovers and did the same for cats. Then we used Instagram’s geo-data to see how many Dogstagram posts and how many Catstagram posts were made in every part of the world.

Cats Sit All Over World Map; Dogs Run Off with America, Oceania 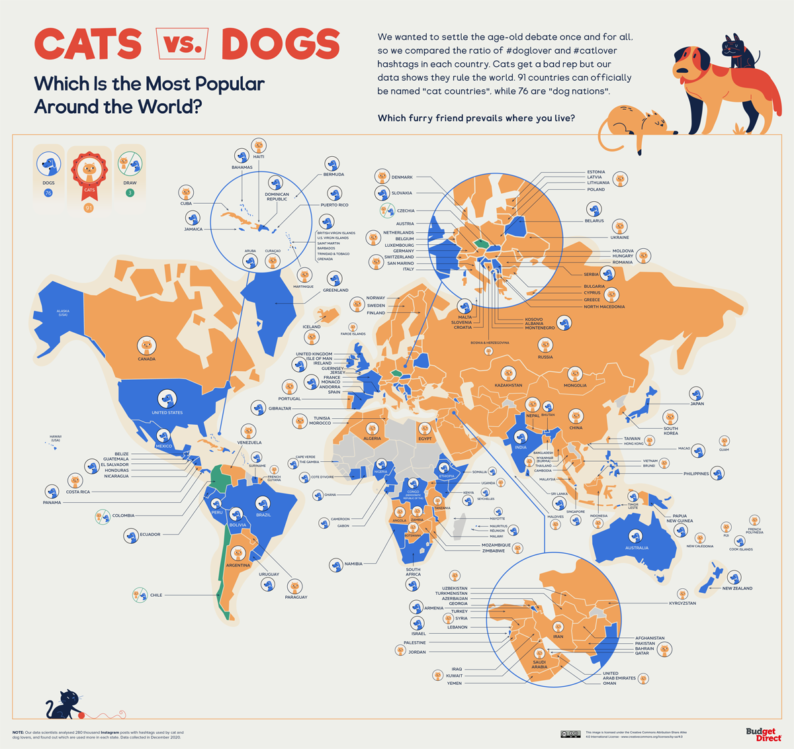 Country-for-country, the cats have it. We found 91 countries with more cat posts than dog posts on Instagram, and just 76 the other way around. Cat-lover territory includes the huge territories of Canada (52.3% of cat or dog photos are cats), China (88.2% cats), and Russia (64% cats).

The dogs take more continents, though. Dog posts outweigh cat posts across North and South America, Oceania, and Africa, while the cats take just Europe and Asia. The most fervently dog-loving city is Morpeth in North East England. Morpeth has the highest number of dog posts among the 58 cities that are 100% pro-dog. Hoofddorp in the west of the Netherlands is the most emphatically pro-cat city. 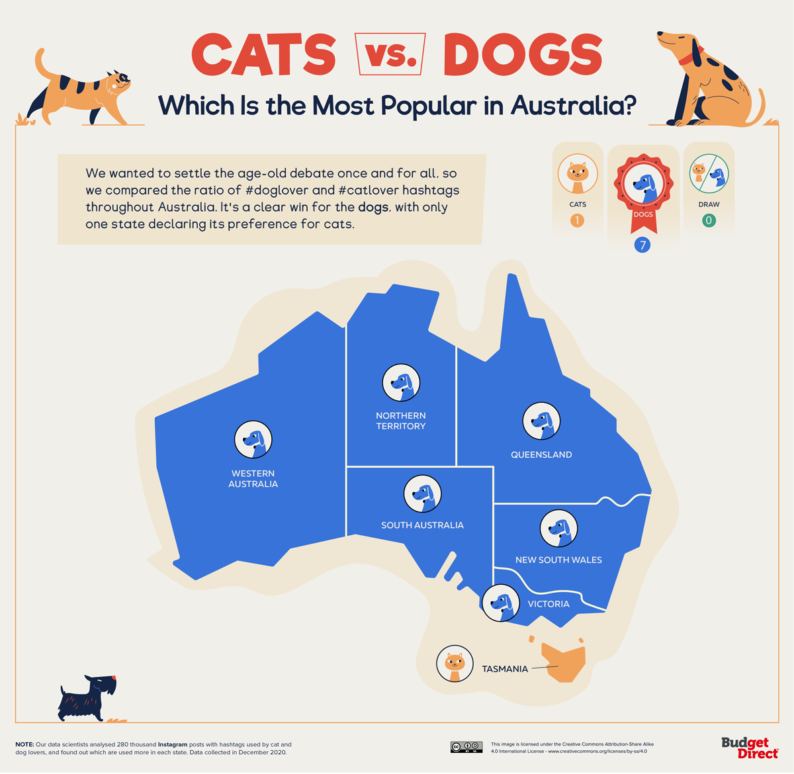 You knew it in your heart. Australians are dog people. Tasmania is the only state that posts more pictures of cats than dogs – and everyone knows cats hate water, so the mainland is safe. Cats may be easier to photograph than dogs, but 40% of Aussie households have dogs, while only 27% have cats.

The picture does get a bit more complex if you look city by city, however. Cats are more photographed than dogs in Canberra, Rose Bay, Erina, and Sunshine Coast. And it’s too close to call in Sydney. 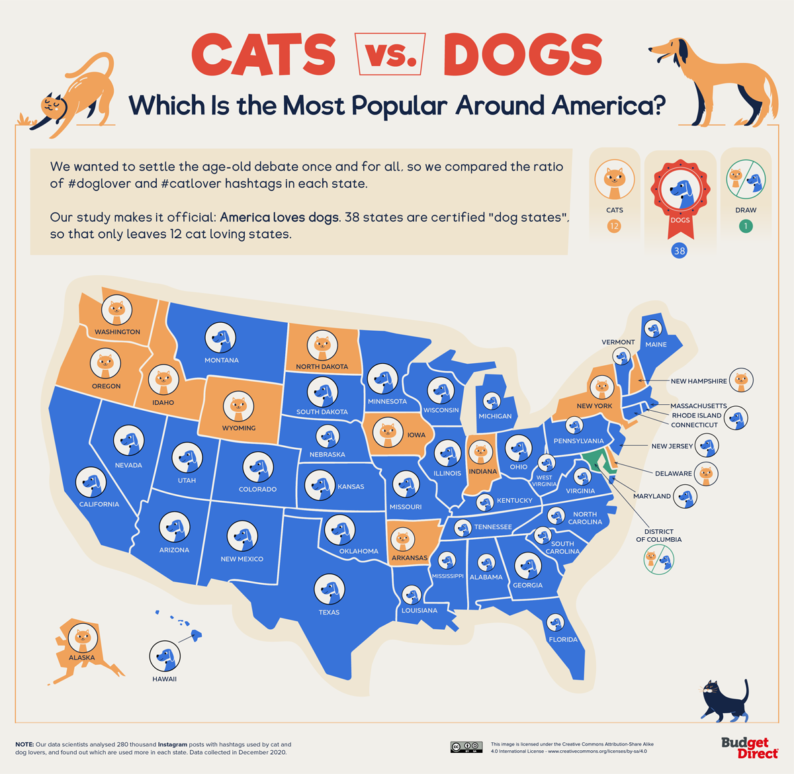 The United States may feature a ‘cat belt’ in the north-west (Washington-Oregon-Idaho-Wyoming are all cat states), but America is overwhelmingly ‘Re-pup-lickin’ (sorry, Demo-cats!) when it comes to pet love. Dogs also have it city by city, by 106 to 45. Gardena, CA, is the most overwhelmingly pro-dog state, while nearby Elk Grove is a cat ‘hood’.

Funnily enough, DC is the only ‘state’ that’s too close to call. Cat-lovers posted 50.5% of the cat/dog content, against 49.5% by dog-lovers. Re-count! Re-count!

This is what real city rivalries are about. Select a country to browse the cities in your homeland, and choose Cats or Dogs to reveal what percentage of each city prefers Instagramming one pet type or the other.

Leeds and Sheffield are among big-name dog cities in the UK, although – like cat cities Aberdeen and

Birmingham – it was a close call. London pets are the most photographed in the land. And 56.9% of those photos are of cats, while just 43.1% are dogs.

New York City pets are America’s most-Instagrammed, and cat pictures outweigh dog pics by 59.6% to 40.4%. The results are similar in LA. But Chicago is a dog city, with a 52.1:47.9 dog-cat ratio. And Long Beach, home of the highly photogenic Snoop Dogg? A dog city, naturally. Some 62.5% of dog- or cat-themed Instagram posts in Long Beach feature a bow-wow.

In conclusion, cats are crowned the most popular in the world, but the data shows that the battle between cats and dogs for our affections is far from over. Perhaps you even have room in your heart for both.

We collected posts on Instagram tagged with one of these hashtags:

Then we extracted the location data of each post and awarded the victory to the pet with the higher share of posts.